(Anyone else have a better name that works with the word Makuta please do not hesitate to say so I need a better name ^^; but please don’t Rename this post I am asking so I can decide what is good and I will credit whoever comes up with the name)

The Toa Guardians saw that as the Makuta working for the New threat got newer ranks their strength grew as well. for this Reason Yami saw it fit to build upon his current form. though he wished to keep his current form this was something that needed to be done in order to find a way to combat the Makuta. as his other Fellow Toa tried to talk him out of it one Specific Toa in their group thought it was a perfect Idea and even helped him do it to where he could keep his old design. and Thus The Makuta buster was born.

Through the other worldly powers this specific Toa had, it helped not only build the mech but also build upon the powers of Yami’s powers. for instance the face mask that protects Yami’s head boosts his mask’s mask power and infuses with his mask to give him the powers of the mask of flight strength and speed, however if he uses more then one of these mask powers at a time the energy in the suit will run out quickly leaving him in an empty shell and possibly vulnerable to attacks…

the body its self is made from the hardest protodirmis and what little Metal the resistance was able to find. while this would normally make for a heavy and somewhat useless body the limbs were made in such a way that while they are the weakest part of the mech they are able to withstand attacks as well as support the heavier chest bay which is more dense to protect Yami sitting inside. the hands have such strength that they could shatter through several walls of Protodermis and metal without breaking while the legs are made as support to take not only incoming enemy fire and hits but also take the weight for the body. alas no design is ever perfect and these limbs are no exception. for that reason they were made to be easily replaceable if destroyed and/or taken off. however this leaves them weeks without the mech because of the shear size. as a result the Toa Guardians always use The Makuta Buster as a Last resort or when they face an overwhelming number of enemies.

The back of the Mech Houses a pair of Cordak blasters that have been modified for not only Laser fire instead of Missiles fire but have been equipped with a jet in the middle set for flight.(When he doesn’t use his mask of flight ability of course.)however being the most vulnerable they are easily damaged and can take very few hits. how the Toa who made this was able to make it withstand heat and not incoming fists and blades nobody yet knows. being the most vulnerable though doesn’t mean they are the weakest weapon. by far these are Yami’s Most powerful tools as far as long range attacks. making it so he can rapid fire hundreds of lasers till the clip his out or sacrifice the entire clip for one huge charged blast that not only damages the foe, but will emit an EMP wave that knocks out all electronics including his suit. for this reason his suit takes half of its remaining power when he does this to boot back up within 5 minutes. this however leaves his suit vulnerable and useless in this amount of time leaving him to wait for it to boot while his team mates protect him or if he is on his own take maters into his own hands.

Being a Toa of Shadows is easy for some people but when half of you is metal you start to miss the protection that it gives. Fortunately for Yami he is able to use this to his advantage. taking his armor off for use in his Makuta Buster gives him Twice the speed of the other Toa but not enough to out run some of the enemies the Makuta have recruited. in this form he is MUCH more vulnerable to attack but has speed to back him up. his Weapons that he normally uses are left with his armor and replaced with two battle claws he has made out of his own elemental powers.

Some people think Size is everything. if you ask Yami and the Toa they would tell you it just depends on the situation. while the Makuta buster is at an INCREDIBLE size its weaknesses still way outweigh its strengths but if need be this suit will help the Toa out whenever need be. equipped with it is a homing device and a signal that will come when called, however if intercepted while in one piece it could take a huge blow as all its defense systems are inoperable till Yami is in the drivers seat. however that is not to say it does not have defenses of its own in each component that makes up this huge and heavy giant known as the Alpha Segment.

the first component is known as the Omega segment. known as the foundation of the mech it has an impenetrable shield that it uses to block incoming fire from the front and protect civilians. using this as its weapon it charges through enemies using the shield as a ramming device, this is sometimes used to get civilians out from behind a place that has no other ways of being entered. however its back side is both a danger and weakness for the rocket boosters in the back are easy to attack and will explode if hit in the right place.

The Second part is known as the Epsilon Segment. this segment is basically a flying tank. the Cordak blasters serving as the cannons, however if an enemy gets underneath this beast its systems are exposed. luckily this segment stays close to the ground and rarely ever comes into the air unless ordered.

Made more for speed the Delta Segment is used as a transport to get civilians out of harms way. though fast physically this Segment on its own is weak in armor. having the lowest armor out of all the segments makes it fast but other then that this segment is the weakest of the four. it has to ion blasters on the front for quick movement of some enemies in front of it.

The segment known as the Beta Segment is made as an over seer. it flies high above the sky with its huge fuel tanks and watches from below giving Yami a birds eye view through the communication system built into his mask. while it is able to scope out everything from up above where is stays it is the only one that has no weapons system to protect it. for this reason it was made with mostly metal and can take several hits while trying to escape all incoming hits and fire.

MY GOD THIS IS HORIBLE! while yes it looks weak this MOC is actually quite stable(if you don’t knock it around.) this MOC is probably one of my weakest builds but the fact that it stands and it is one of my BIGGEST is definitely a win for me. however seeing as it is one of my weakest I will PROBABLY update it later…if not you guys may not be seeing it again. as for the size comparisons up above this segment of the MOC’s Review that is the transformer known as Primus(For those who don’t know.) and it is at least twice the size of most titan class Bionicles. so giving you an Idea of how REDICULESLY HUGE this thing is… 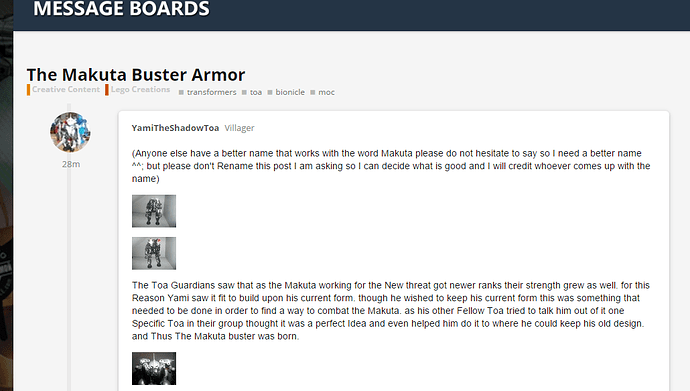 might wanna likefind a way to increase that size yo

well like I said this is one of my weakest MOC’s I try to make them clean but I obviously failed on this ^^;

its still annoying
i shouldnt have to do that when I come to look at a boards topic.
it also makes the moc topic look fairly messy.

its still annoyingi shouldnt have to do that when I come to look at a boards topic.it also makes the moc topic look fairly messy.

I could say something SO wrong about how that comment sounded

I do not seem to understand

Why are you overreacting, its a legitiment complaint
as for the MOC, its messy, and doesnt have anything unique going for it
Just because something is big, doesnt mean its good.

as for the MOC, its messy, and doesnt have anything unique going for itJust because something is big, doesnt mean its good.

so?
if its your weakest moc, don’t post it

Work harder to make it better, then post it

How so?
Its a plastic toy you made, there really is no reason for you to hide the reason you made it your weakest.

trying to figure out how I came off as rude

I tried to remain calm, whilst giving out advice
If I came off as rude anywhere, I shall apologise

How so?Its a plastic toy you made, there really is no reason for you to hide the reason you made it your weakest.

trying to figure out how I came off as rude

I tried to remain calm, whilst giving out adviceIf I came off as rude anywhere, I shall apologise

honestly now your just starting to sound like a troll…

honestly now your just starting to sound like a troll…

I am genuinely confused
In what way do I sound like a troll?

How does he even? He’s just trying to help like everyone else

T8 is a respectable member of the community, I don’t see anything in his posts that is insulting or trolling. Especially in the post you’re quoting.

As for the moc, I have to agree with t8, it’s messy, and those pics are ludicrously tiny.

Pot8o has legitimate complaints, as I also find it a little annoying. It’s not too much of a bother, but I do feel it would be better to see them full size for the actual topic, unless there was a size limit for your post, in which case I can understand that.

However, this isn’t something to fight about. Calling Pot8o a “troll” is stretching it when it comes to him just wanting an easier time viewing the pictures.

Now enough of this.