Every so often I will discover a new design and I just have to make a team of six. I’ve had these guys built for a while, but never posted them until now.

Story: since the fall of Teridax, only Artahka and the Great Beings know how to make new Toa, and no one knows where the Great Beings are. A group of amoral Agori began trying to recreate the Toa. These six were the Agori’s first successful sentient beings, but they had far less elemental power than actual Toa and could not use Mask Powers, a failure in the eyes of the Agori. The Agori were unwilling to kill their creations, so they sold them to the highest bidder: the Skrall, who plan to use these six as an elite strike force. 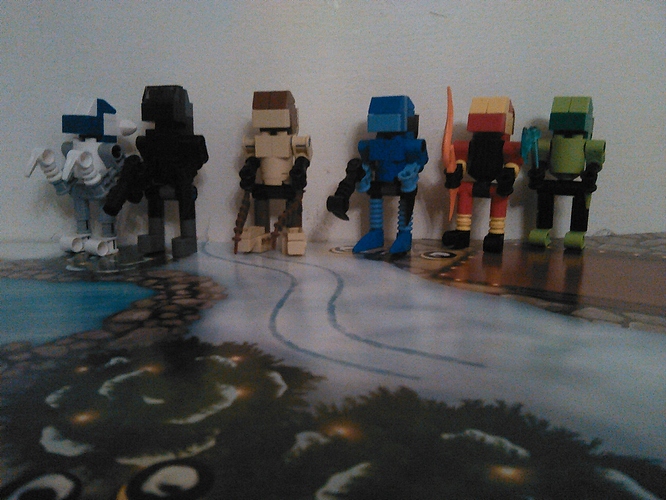 Let’s take a look at these six. 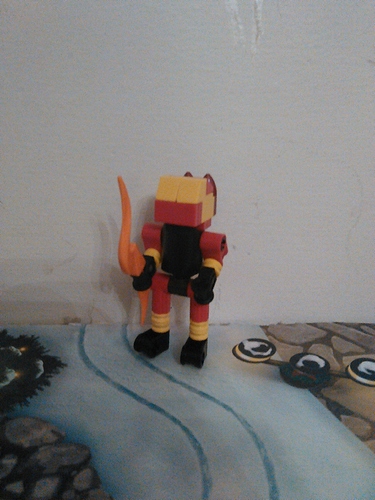 IMG_20161203_180135.jpg1944×2592 1.45 MB
~Name: Taria
~Role: leader
~Powers: can burn things through direct contact, resistance to heat and flame.
~Weapons: the Skrall designed a sword specially for Taria that can channel her elemental powers, allowing her to ignite it without damaging it. Like most of the other artificial Toa, she also carries knives.
~Personality: a lot like G1 Pohatu–friendly to everyone, and also fearless almost to the point of recklessness. 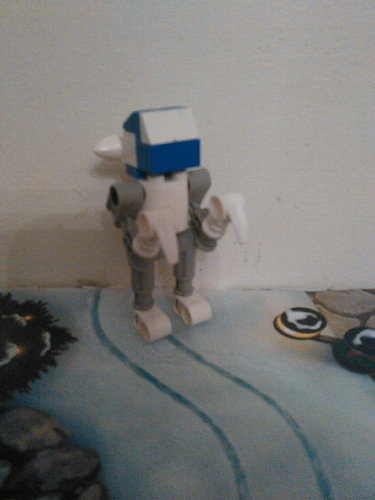 ~Name: Kodi
~Role: infiltrator (can get into almost any place, no matter how fortified)
~Powers: freezing touch, resistance to cold
~Weapons: twin Kamas
~Personality: Kodi seems more like a Toa of Air than Ice–he’s the jokester of the team, too curious for his own good, and also a skilled climber. He’s learned the hard way that Skrall warriors don’t like pranks. Off the battlefield, Kodi seeks to learn everything he can about the Matoran Universe. 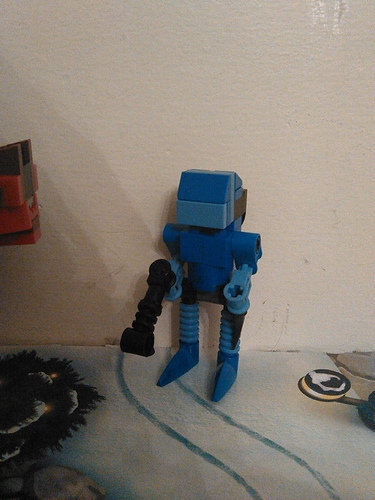 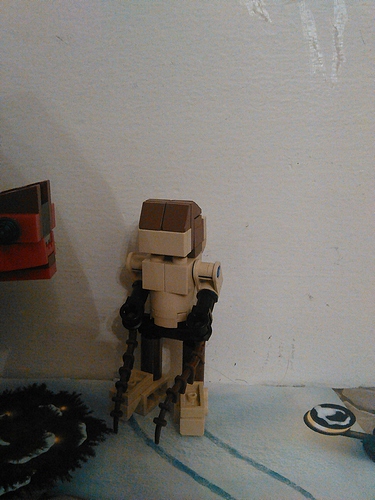 ~Name: Pora
~Role: Scout
~Powers: can cause rocks around her to fuse or crumble. Can also combine her powers with Onell to destroy iron, though this weakens both of them.
~Weapons: spiked tonfas, feet additions
~Personality: Pora almost seems like two different people. Off the battlefield, Pora is energetic, never sitting still for too long, and talkative, hardly ever shutting up. In battle, though, Pora changes, making no noise unless necessary. Unlike some of the other Toa, she doesn’t banter or taunt her foes; she just kills them, as quickly and efficiently as possible. 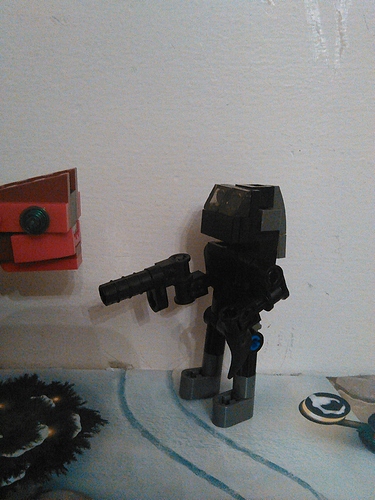 ~Name: Onell
~Role: sniper, analyst
~Powers: short-range earth manipulation.
~Weapons: sniper rifle, knives
~Personality: Onell is the problem-solver of the group, able to find a solution to any puzzle or dilemna–a skill that she does not hesitate to boast about. 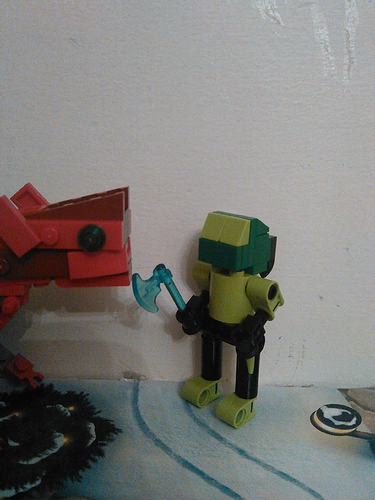 ~Name: Lexis
~Role: Guide
~Powers: wind manipulation, levitation
~Weapons: axe, knives
~Personality: Lexis is the smart one of the group, the one who never goes on a mission without knowing all there is to know about the destination and the enemy. And Lexis never forgets anything.

I also made an enemy for them: Taelii, a rogue Skrall 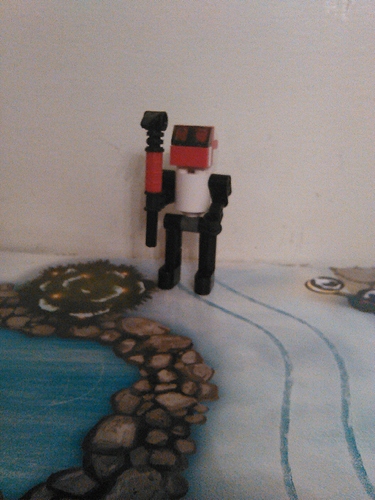 The artificial Toa beat every foe they faced–until they met Taelii. This Skrall warrior has faced the Toa six times so far and had proven to be a constant source of frustration.
~Weapon: staff capable of forming an energy shield that can block Onell’s bullets. 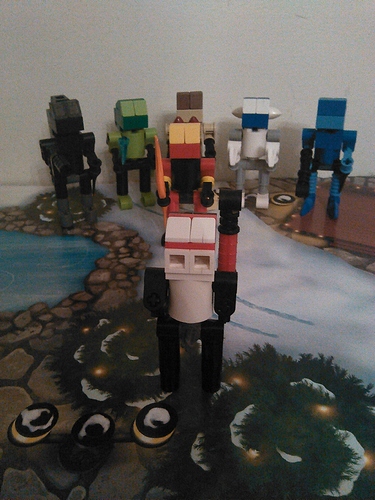 “You don’t stand a chance against all six of us.”
“Wanna bet?”

Despite being “artificial” these Toa seem to be teeming with personality

Too bad that isn’t reflected so much in their builds. They’re pretty much clones of the same design (albeit a very good design). More distinctiveness (broader shoulders, longer legs/arms, etc) would make them look and feel more dynamic both as individuals and as a group

The build each shares is simple, but highly effective. Some slight variation outside of weaponry would be a nice inclusion, but great job otherwise.

@Rockho @Stoax
Thanks! Unfortunately, there’s only so much I can modify this design. Pora and Onell are taller than the rest; Kodi, Taria, and Onell have different helmets, and Gael and Pora have different feet. Minor details, yes, but they do have something.

That’s a short sniper rifle
looks more like an smg

I could make an argument abut how this is BIONICLE and the weapons don’t have to be realistic, but the real reason is: I didn’t want the MOC to be off-balance.

she just kills them

wooah
We got a code breaker

lol idk if these guys have to follow it

the mocs are really cool tho

lol idk if these guys have to follow it

Well, having been “raised” so to speak by the Skrall, they actually don’t know anything about the Toa Code to begin with. An the Skrall aren’t exactly known for mercy and kindness.

Aw man. Now I wanna make some mini Toa! These are amazing.