The Original Concept of Hero Factory

A few days ago Faber posted a concept poster of Hero Factory during it’s early stages of development. The description was later removed as Faber felt it was too emotional and that the development work should remain secret. However, thanks to a 4chan anon and a few board users, we have the full confirmed description which sheds some light on the IFB ending and the original concept of HF.

[spoiler]“The last HF episode “Invasion from below” became the most watched piece of content on LEGO’s website the year it came out. At the same time it marked the end of the short life of Hero Factory. It was criticised for a lot of different reasons but here are a few personal views on this battered factory.”

“Invasion from Below” was made on a very low budget by Advance and Ghost who made all the original Bionicle animations. The episode was a struggle because the storyline got changed dramatically during production. It was definitely ment to be continued because (of cause) the Queen wasn’t gone and the case wasn’t closed for HF. The voice actor changes was done for budget reasons because we didn’t have budget for the the original voice actors."

“Having worked on both Bionicle and HF from the very beginning I can tell you that the work that went into creating the HF universe was much more deep than the early foundation of Bionicle. We wanted to use all we had learned from Bionicle but make something that was really different from Bionicle yet as epic and big and therefore we created what we called a “realtime IP” meaning that this was not a legend, it was actually happening now somewhere in another galaxy. We wanted to mirror present day but in a tech build-up. In some way inspired by the humor of The Incredibles by Pixar.”

“The backstory of HF is extremely deep and epic and hold secrets that were never used. They are still in the huge concept bible that I keep. I hope to get to show them and do a extensive blogpost about HF and it’s creation on this blog when the time is right. A last note is that Hero Factory was only meant as a location springboard into this vast story universe and the story was meant to get much more personal when the real truth about the factory was discovered. The idea of a factory that builds cocky heros made to specifications was actually a provocation to the whole legendary hero story we had told in Bionicle. The real hero would be found somewhere else…

to be continued…” [/spoiler] 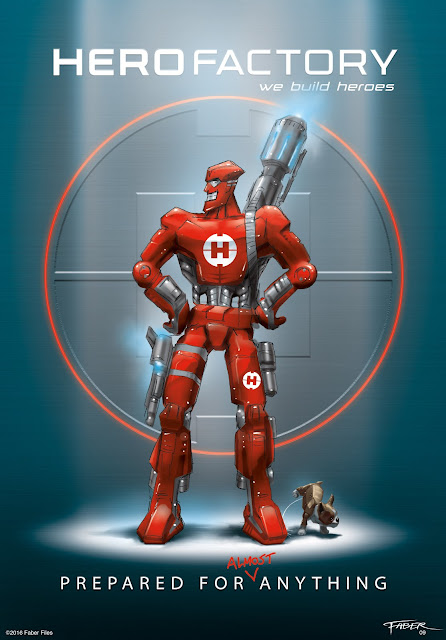 Here’s the poster depicting a rather superhero-esque robot. The poster gives me a Rachet and Clank vibe for some reason.

Like a lot of other fans I viewed Hero Factory as a mountain of unused potential, and after reading what it really could have been those feelings have been amplified by 11. A story and universe that could have been even stronger than Bionicle combined with incredible creative freedom just really hurts as a lost opportunity. I have to wonder if a similar situation happened with Bio G2.

Discuss what you think on what HF almost was.

I would have preferred this.

Yep. They should have taken more risks.

Well, now I just feel sorry for the line.

never lived up to its full potential.

Thanks for finding this, as a huge HF fan it warms my heart to see something like this.

I really would have loved to see HF live up to its potential, without the restrictions placed on it by the looming return of BIONICLE.

A last note is that Hero Factory was only meant as a location springboard into this vast story universe and the story was meant to get much more personal when the real truth about the factory was discovered. The idea of a factory that builds cocky heros made to specifications was actually a provocation to the whole legendary hero story we had told in Bionicle. The real hero would be found somewhere else…

A last note is that Hero Factory was only meant as a location springboard into this vast story universe and the story was meant to get much more personal when the real truth about the factory was discovered. The idea of a factory that builds cocky heros made to specifications was actually a provocation to the whole legendary hero story we had told in Bionicle. The real hero would be found somewhere else…

Where is the “somewhere else”? Is he talking about the Heroes learning to be heroes through more then just programming, or what?

Where is the “somewhere else”? Is he talking about the Heroes learning to be heroes through more then just programming, or what?

I’m not sure. It could imply that the real Heroes would be from somewhere other than those built at the factory, or it could mean that the Heroes would learn what it means to be a real Hero instead of a platonic one.

I’d like to imagine that the Hero Factory was intended to be corrupt but not truly evil organization. Like they had lost sight of their goal of protecting the galaxy and focused instead on profiting off their Heroes, which became a lot like the snobbish celebrity stars of today. They’d do some good in front of the cameras, an inspirational speech here and there, but behind the scenes most of them would just be jerks. Considering all the commercial material that comes from superhero franchises like movies, comics, and merch, the idea that an organization producing these heroes would take advantage of the populace for profit all doesn’t seem that off.
And when you go that far when do you stop? Would the first hero design priority be to excite the audience rather than taking out the bad guy? Would there constantly be cover-ups for the scandals or incidents caused by the Heroes? Would teams be grouped by target demographic data before skill? Would most of the the fights between villains be staged?
The main protagonists would then have to find out what makes a real hero in a galaxy with a warped definition.

I’m sure the idea of a dark Hero Factory has been said better before, but it really goes to show how far they could have gone with this.

The Dog marking its territory symbolises the entitled G1 fans that backlashed over the creation of a new constraction line that “replaced” Bionicle. So they lubricate it, marking it as their territory of influence and self-satisfaction (through purchase of the sets, or the negative promoting of the line, or both).

The height of the dog symbolises the amount of people from that fandom, which is a small part of the community. The harm it does, while small at a glace, will ultimetly rust the leg and left permanent marks over time.

The visual representation of the Red Figure shows us the close ties to its constraction roots, while visually also bringing new to the table. The H of Hero (normal human letters as oppose to made up Matoran ones) is shown up front with the white logo that contrasts the red which is already an eye catcher. “Prepared for Almost Anything” had a deeper meaning of Hero Factory the line was planned in advance, but was incapable of being ready for the true test, which was coaping with the actual market demand/environment.

The Faber signature shows us that it was obviously done by him (duh), and that he still clings to the constraction line in some way, ether through work or personal reasons.

I have often said elsewhere (on another site) that Hero Factory had a ton of potential, being effectively a factory that makes custom Robocops that also happens to be the Green Lantern Corps. How can you not create an excellent TV show with that kind of premise? Certainly great and very open for writing fan fiction and doing whatever you wanted, as we didn’t get many limits on this universe.

Although the first year of HF did give us a pretty solid foundation for the story of this universe, this new information is surprising. I thought the point of HF was to remove any depth and lore to prevent what Lego told us was the cancellation of the original Bionicle run (too much story). But now that this is here…I find it fascinating that indeed there might have been an actual good narrative instead of the opened ended, do whatever you want with it, universe. Granted, I don’t think a more story focused version of HF would have destroyed its open creativity, but I never thought for a moment that behind the scenes that they tried to use HF’s untapped potential from the beginning. Such a shame that it didn’t come to pass.

Hopefully though, it wouldn’t have turned into the madness that my HF universe became. Cause that would have been bad.

Every LEGO original IP has potential for greatness, its just LEGO often than not is incapable, down right self destructive and limiting for such ideas to flurish. Ironic, given from a company which promotes limitless imagination.

Maybe they should let someone else completely do the story part of their IPs which are more capable and have more experience than just do it themselves because it worked for Bionicle, it worked for the LEGO Movie, and give more creative freedom to push into new and interesting thematics that I know kids and older people would love cause it was proven to be successful in things such as Transformers, Steven Universe, Avatar, and more.

I have often said elsewhere (on another site) that Hero Factory had a ton of potential, being effectively a factory that makes custom Robocops that also happens to be the Green Lantern Corps. How can you not create an excellent TV show with that kind of premise? Certainly great and very open for writing fan fiction and doing whatever you wanted, as we didn’t get many limits on this universe.

The worst thing is we already had a similar thing with Green Lantern of all examples as a TV kids show…its just it didnt have any toys for the show to be greenlight to continue. The merger of great toys with great media is a must.

After rereading this, I can’t see how it would be marked to kids though.

Wow.
I always felt HF had the potential, but I never knew it was planned.
I did always feel like the universe was amazing for fan works: infinite worlds, custom heroes who ave their own place in the canon (recon team), and any number of possible villains. All it needed was some universe development (and maybe a moral question or two) for it to be a great line.
Unfortunately, hero factory was never quite great.
I hope, maybe some day, it can come back and be the line it deserved to be.

well that’s… disheartening, knowing that they had this epic thing planned out but never got to do it, I really wish lego would take more risks again

Why wait for LEGO to do the work, why not do it yourself.

I would’ve loved this.

What could have been…

Personally, I resented HF from the beginning until just a few years ago when I got back into constraction building. I figured HF would be the only way to get the parts (then Bonklez came back w00t). Either way, it’s interesting that they had a deeper story already planned but it just never happened.

If it made the story anything like the original Bionicle I would have loved it. I like things with deep lore and stories, and I think it’s sad hero factory never got to live up to its potential.