So I made this MOC: http://board.ttvpodcast.com/t/warrius-2-0/4909?u=chaotictempleknight and introduced the concept of the Primal Fire element in my version of the bionicle universe. Warrius discovered a Sacred Axe that was imbued with the power of Primal Fire. But what gave him the POWAAAAAAAAAR! in the first place? Well in this universe, a group of entities called the primal spirits observe the matoran universe. It's unknown what their goals are, but they occasionally imbue certain matoran with the primal elements through sacred weapons.

And what are the Primal elements exactly? They are basically more advanced versions of their normal counter parts. They grant the matoran turned primal warriors abilities you wouldn't normally see in a toa. For instance, Warrius' Primal Fire allows him to go into a fire based berserk mode.

So enough of this explanation. You guys want to see the MOCs, this is the Lego creations thread after all.

I made 3 other primal warriors. 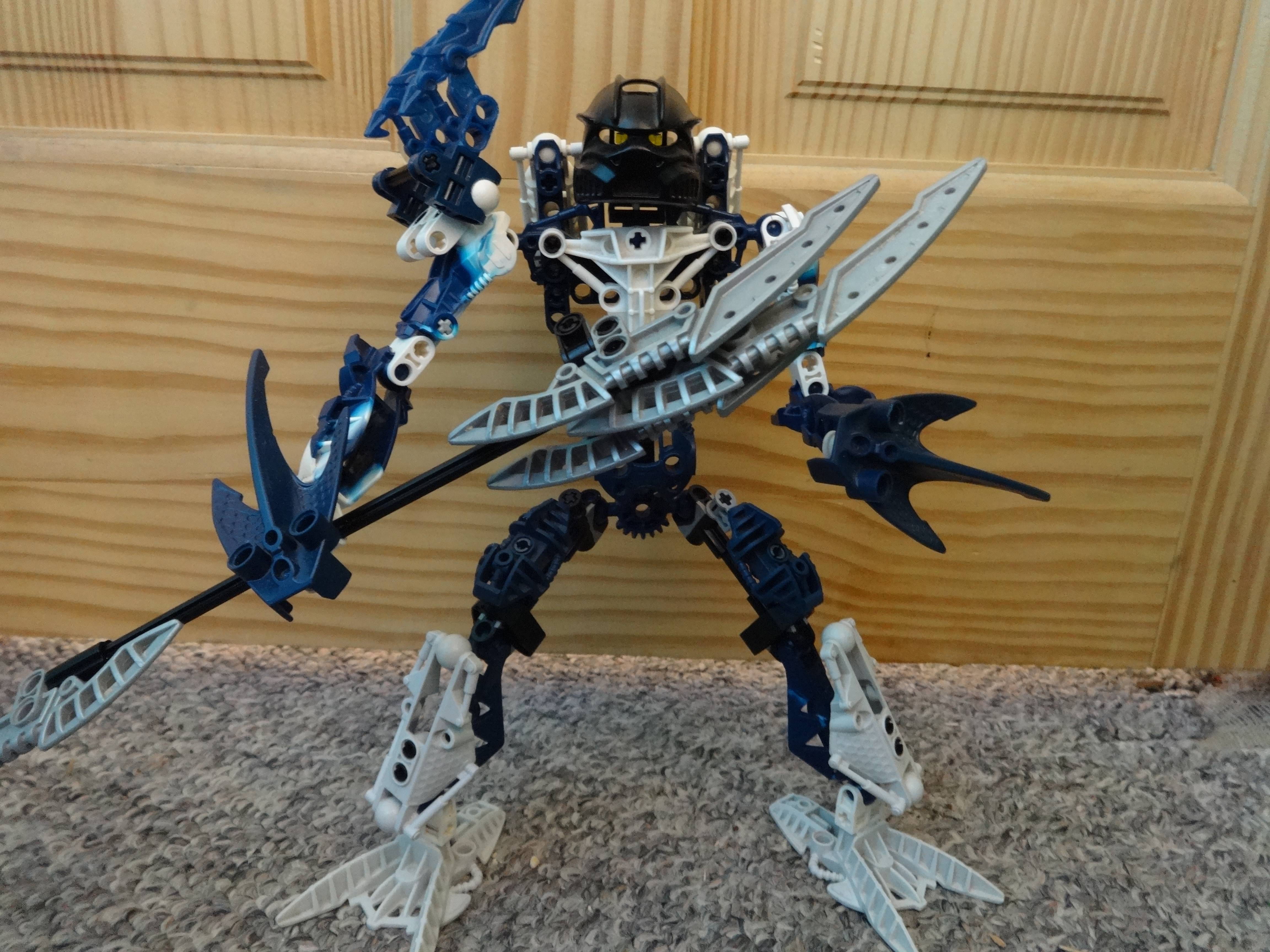 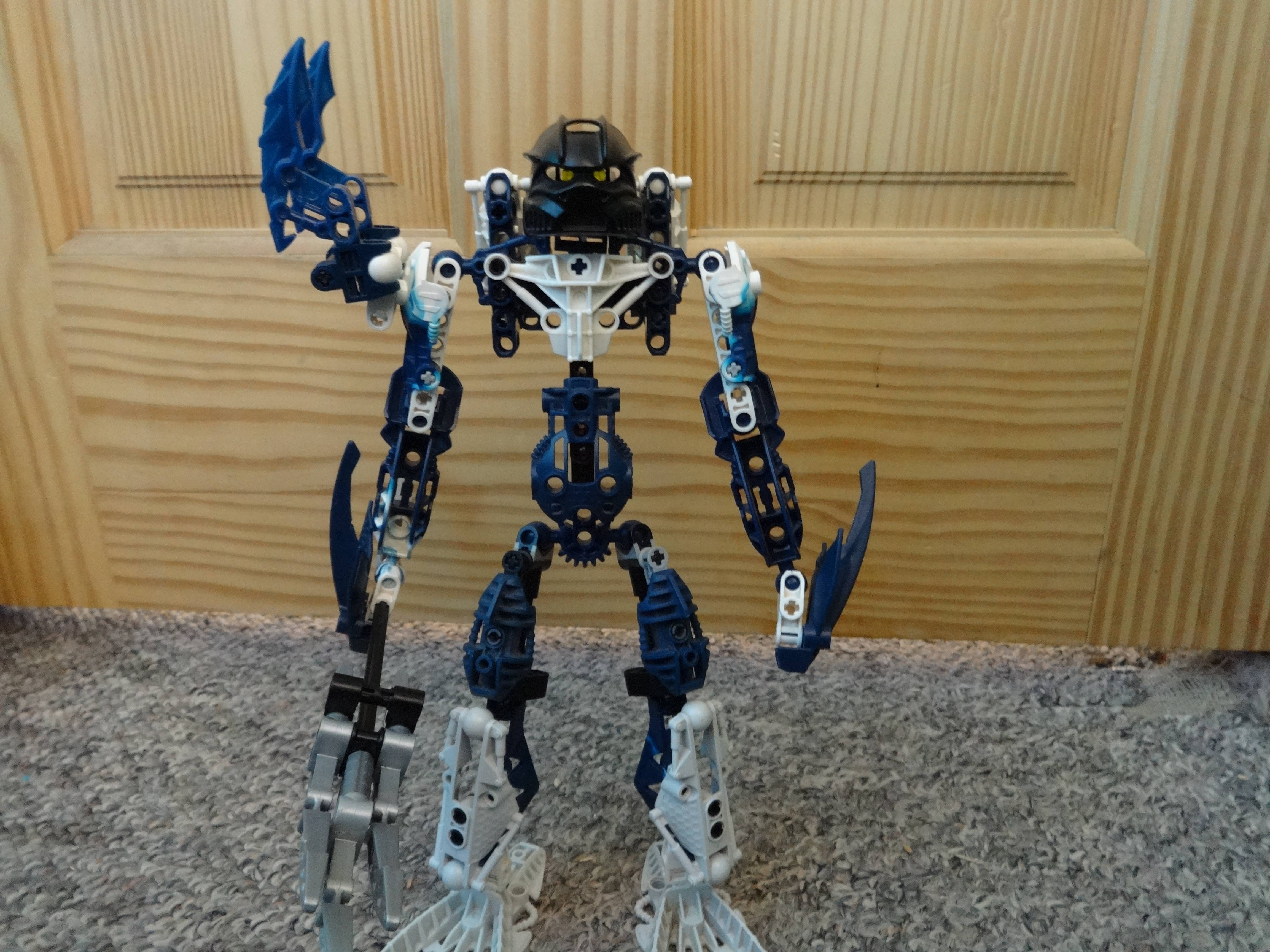 Good lord I love this MOC. Here is a close up of the body by the way: 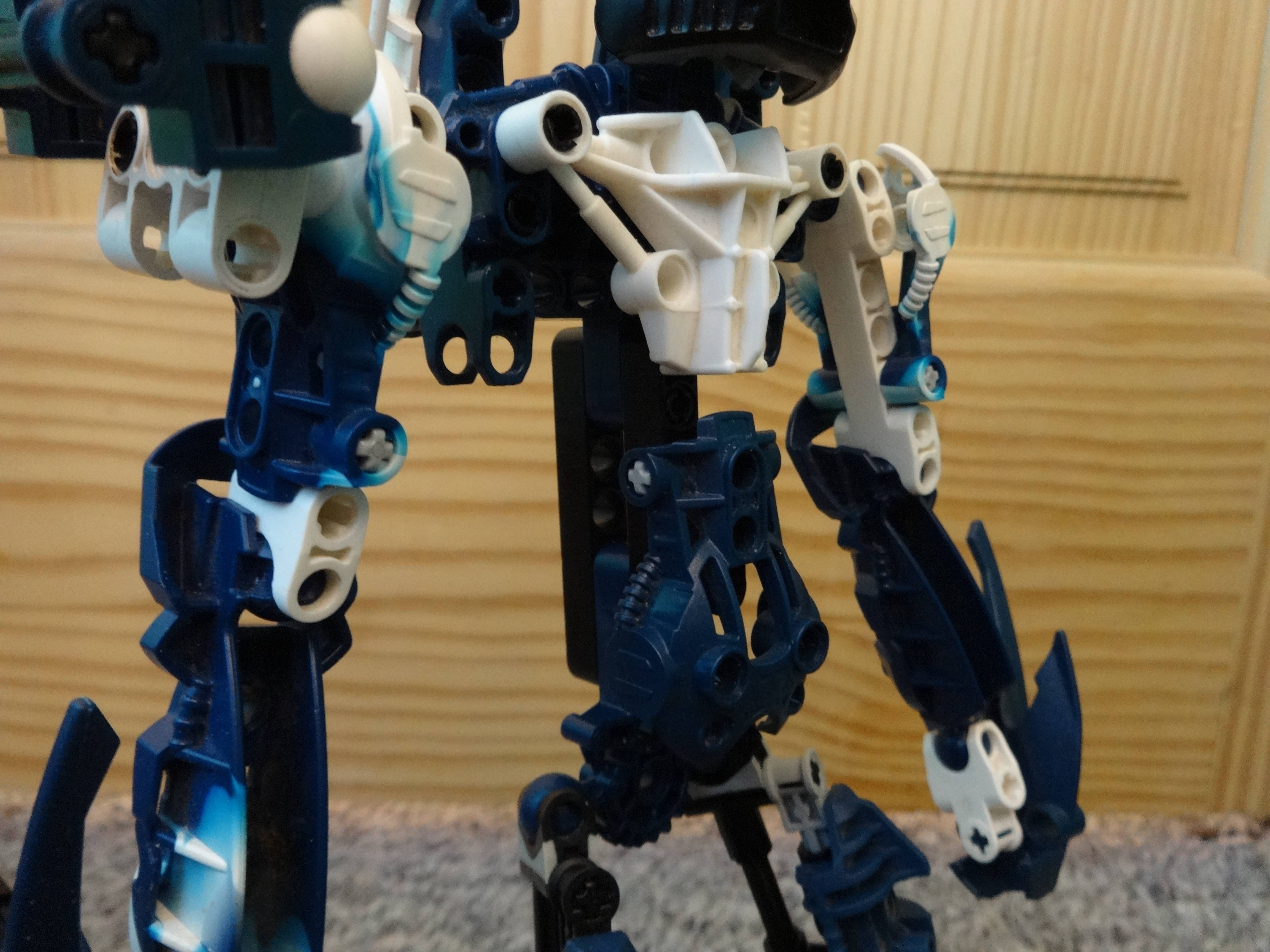 Yes, it is similar Warrius, but less bulky. Blixt is a female Primal Warrior after all. And yes, I know there is some asymmetry. I couldn't find certain parts in my collection and had to settle with the next best thing 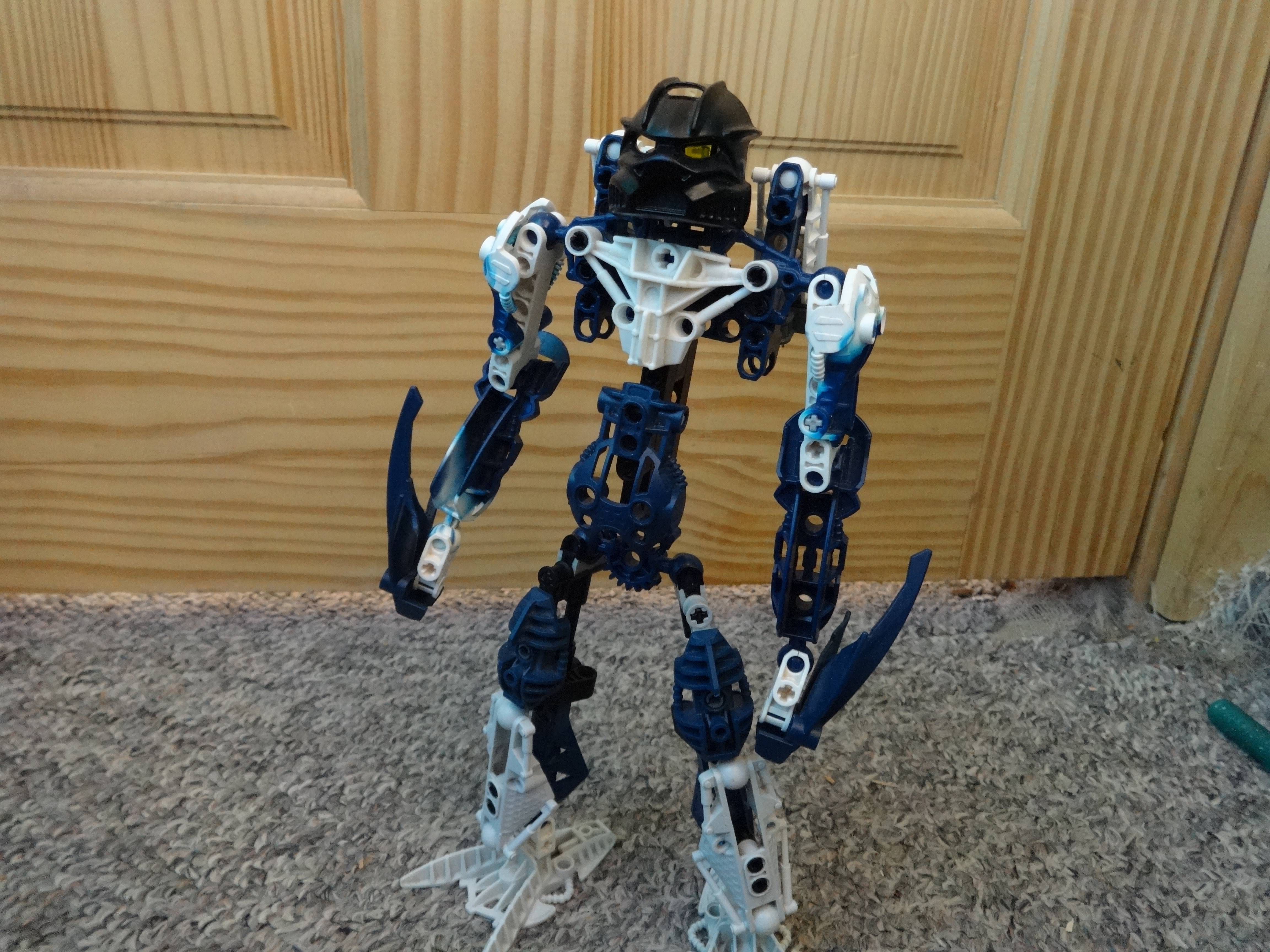 And how about that mask? Well here is some of Blixt's back story: When Blixt was a matoran, she was a Ga matoran apprenticing to be a sailor under another Ga-matoan who wore a metru blue Kaukau. But an accident mortally wounded Blixt's teacher. Her teacher asked Blixt to take her Kaukau and where it in her memory. Now let's fast forward to when she became a primal warrior. Blixt was exploring a previously undiscovered cave when she found a strange staff. She touched the staff and Primal lighting flooded into her body and turned her into the primal warrior of lighting. The lightning powered up her Kaukau to it's nuva state, but it burnt the mask and turned it black. Now it can only help channel lightning. Upon becoming a primal warrior, she was instructed by the primal spirit of lightning to go to an island (that is called primal island by the residents) in the southern islands and help lead the community on the island.

little trivia for all of you: Blixt is Swedish for Flash. Or at least it should be. I used Google translate, but I noticed it only has trouble with Oriental languages and Swedish is not Oriental. 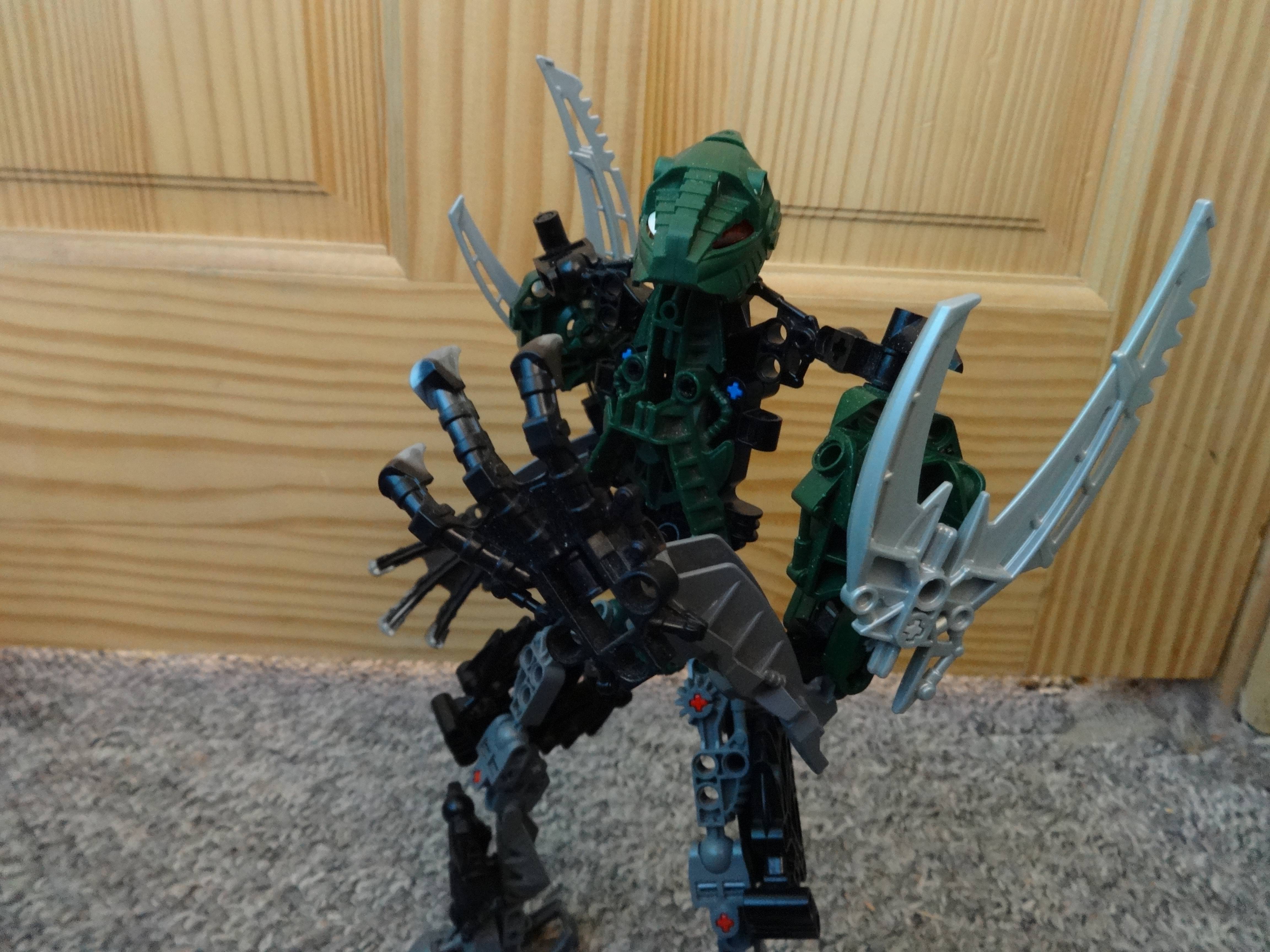 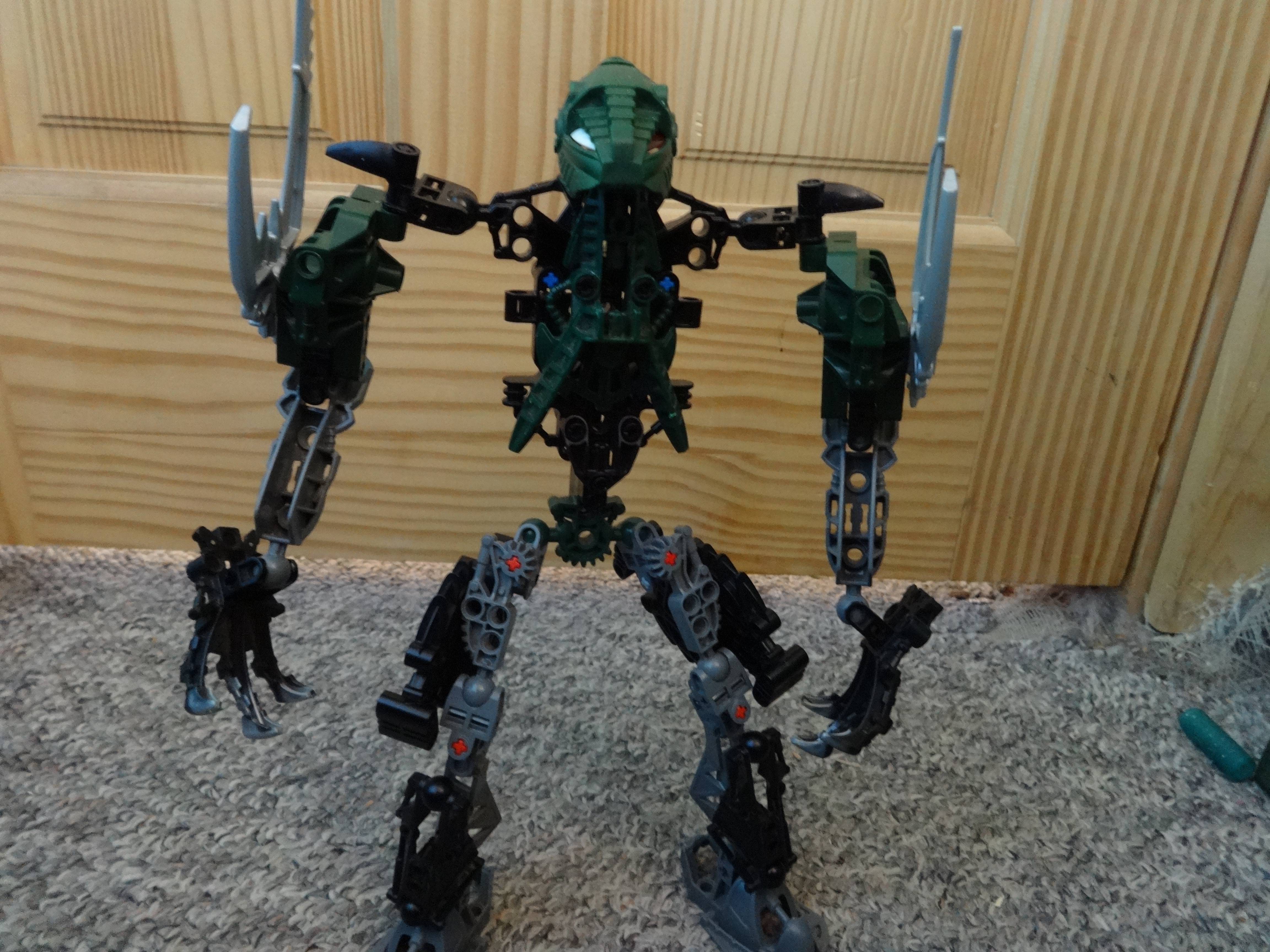 Blind in one eye and has a low tolerance for shenanigans, not much is known about Averrio. He has been on primal island for a very long time. It's unknown what he did as a matoran or if he even was a matoran to begin with.

So originally I had a glider contraption on him, but it wasn't working out to well. He is blind in one eye, that is why he has a white eye. And in regards to the legs and color scheme... I am so low on parts right now it's not funny. 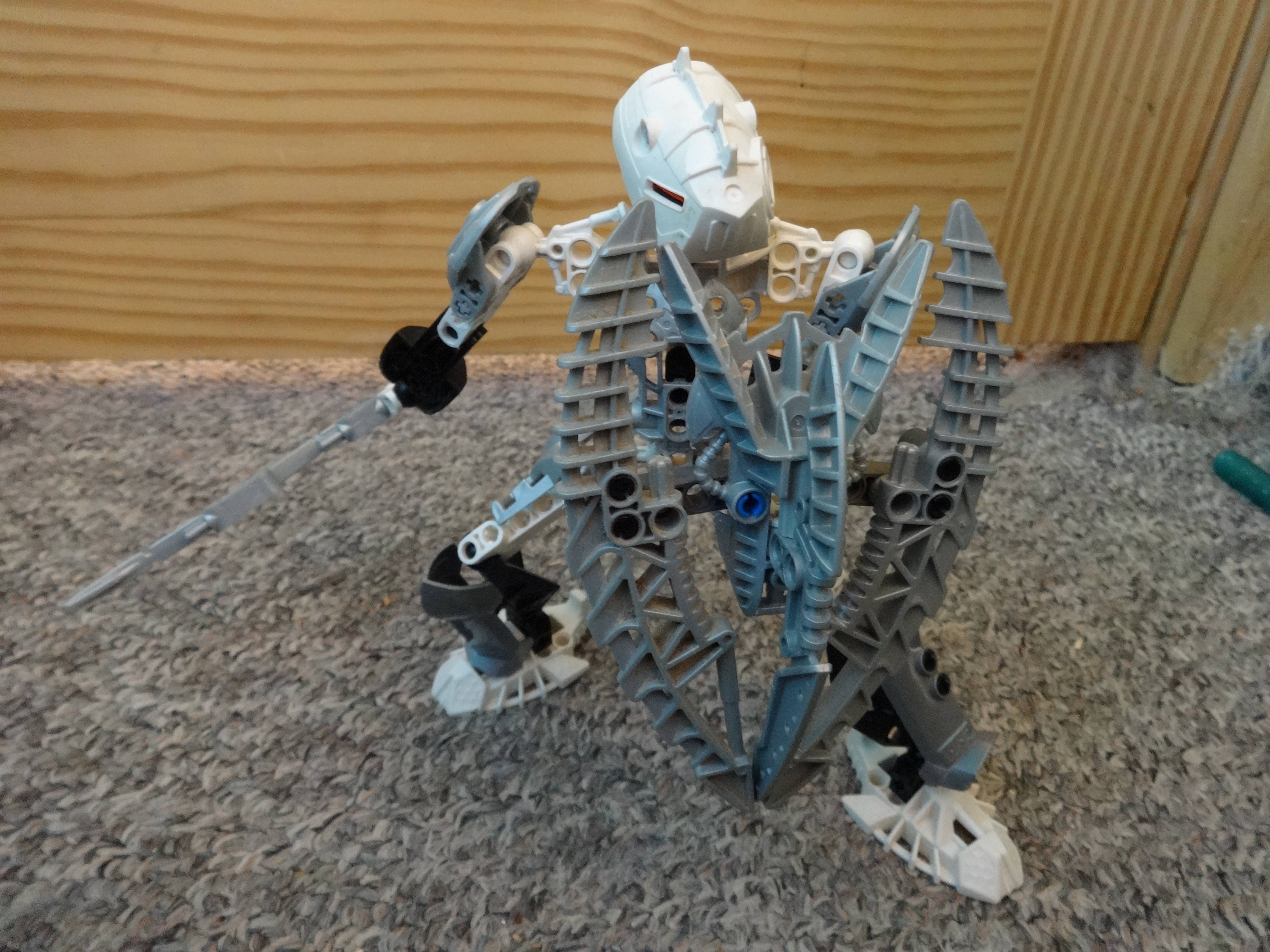 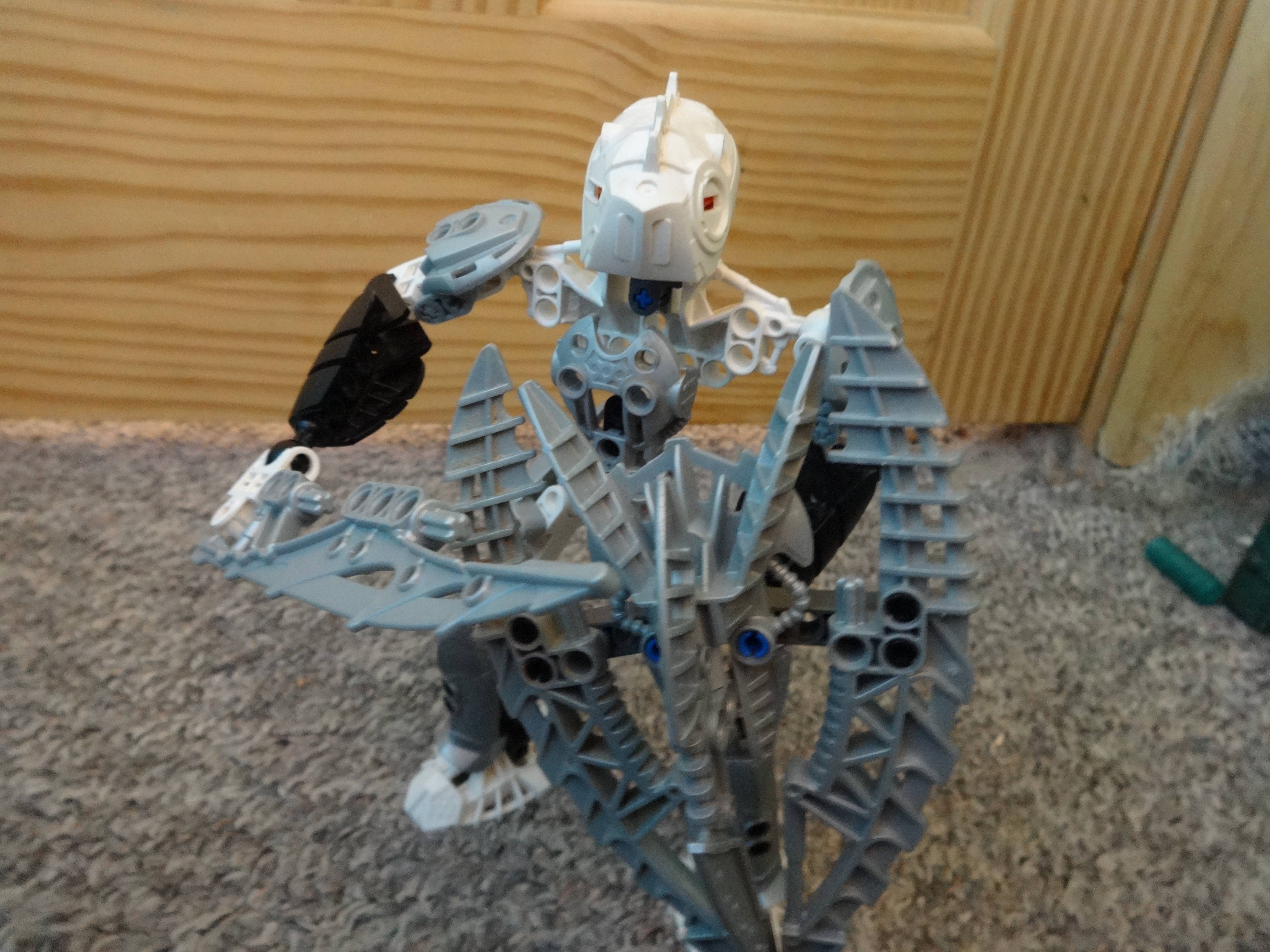 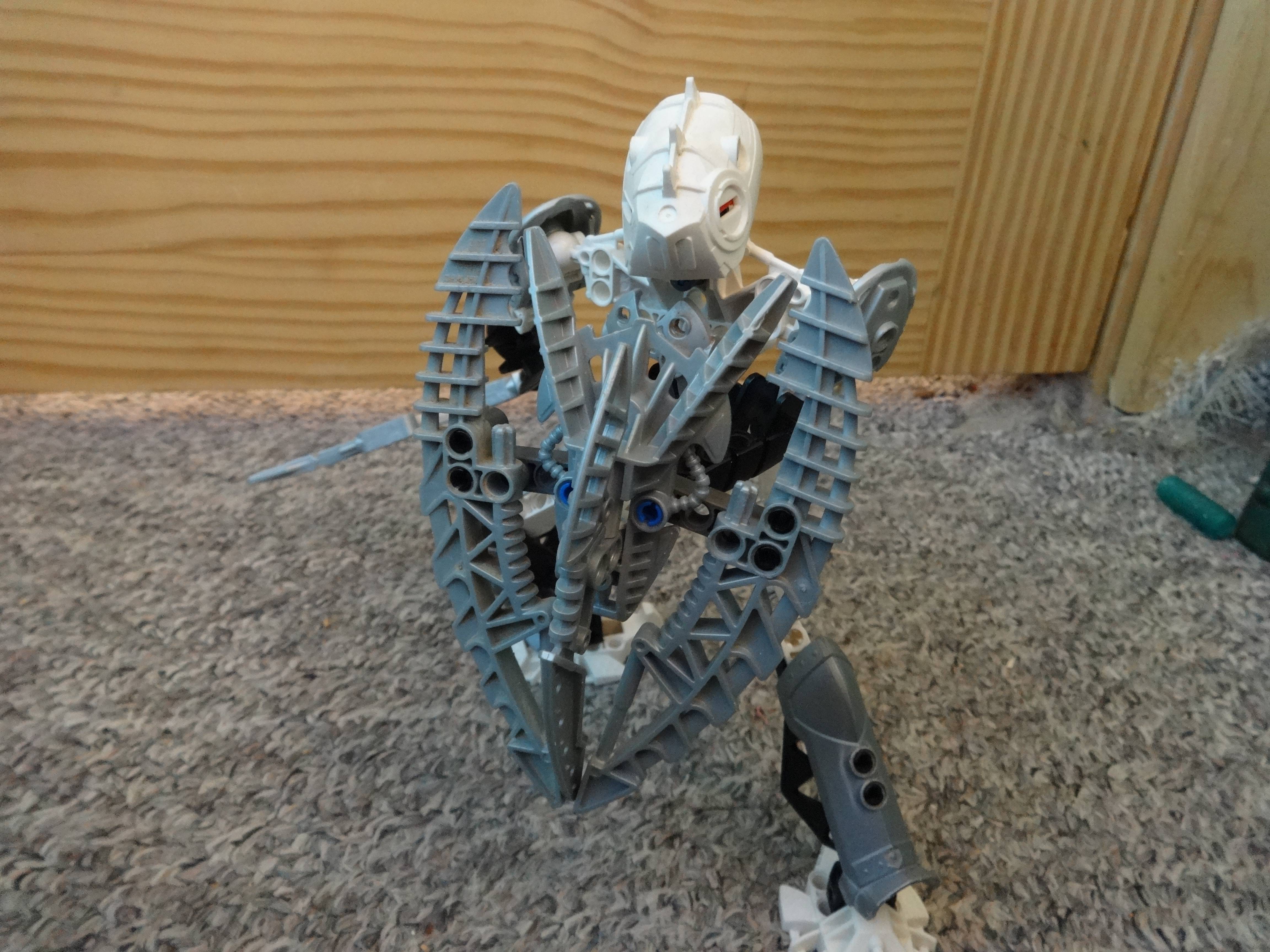 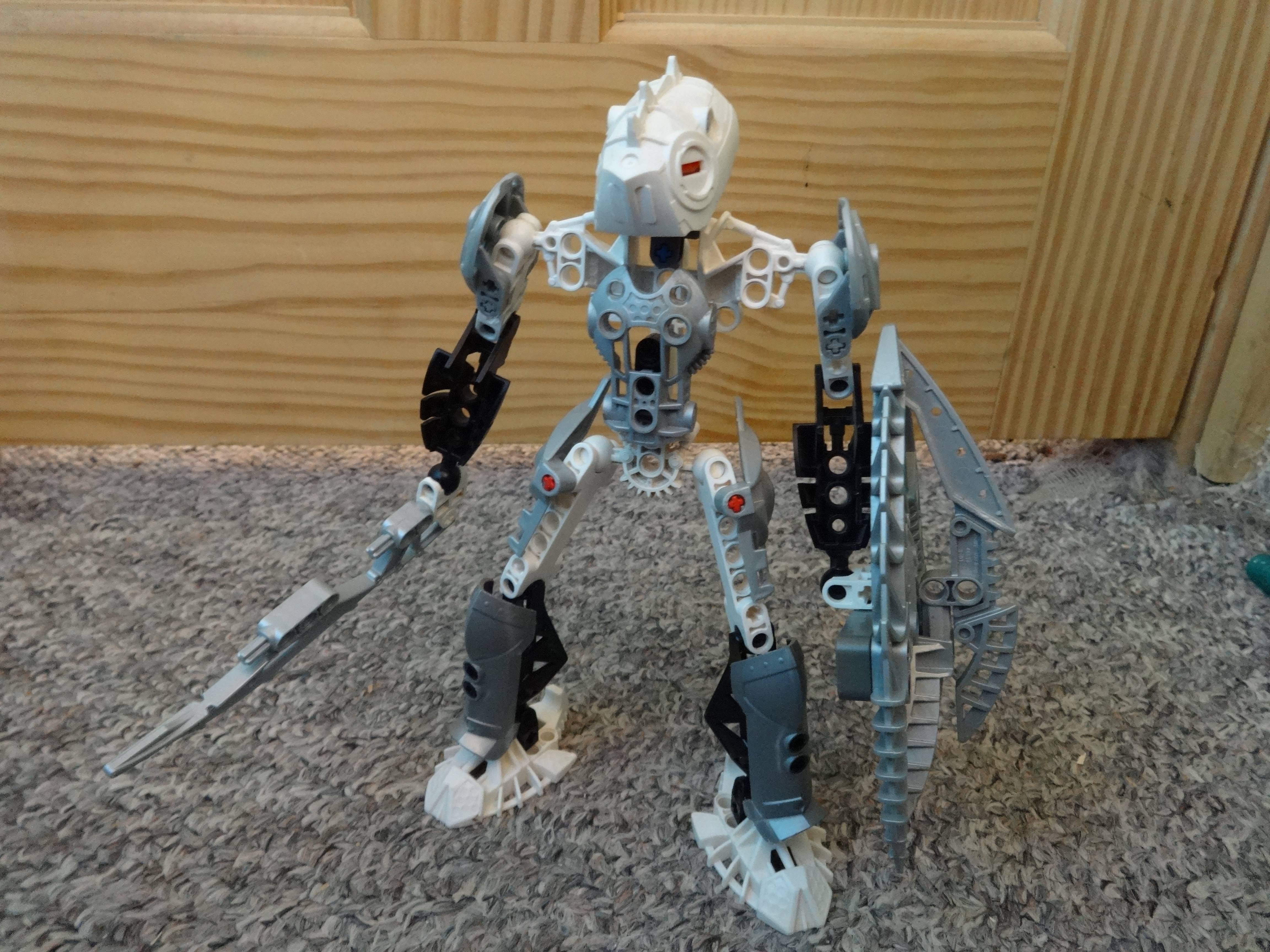 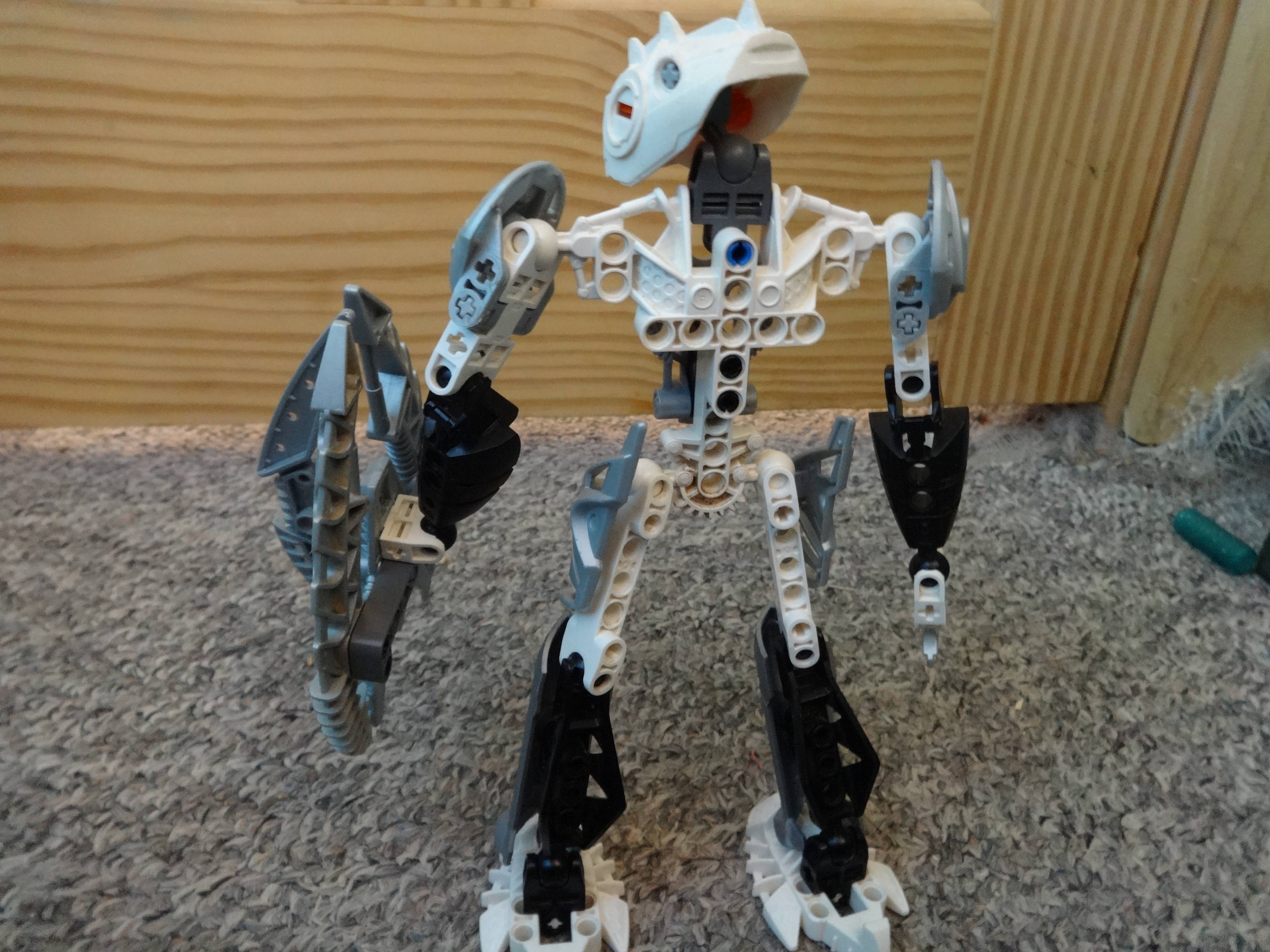 Like Averrio, not much is known about Vardun. He secludes himself on the icy mountain of primal island.

I really like how the shield turned out. I threw some parts together and got a functional shield. I feel as though I was subconsciously influenced by dark souls as I was playing it a lot at the time of making these MOCs. And yes, those are Knight's Kingdom Parts. I find that with the right parts, Knight's kingdom parts go perfectly with Bionicle parts.

Also here is the edited version of Warrius, Primal Warrior of Fire: 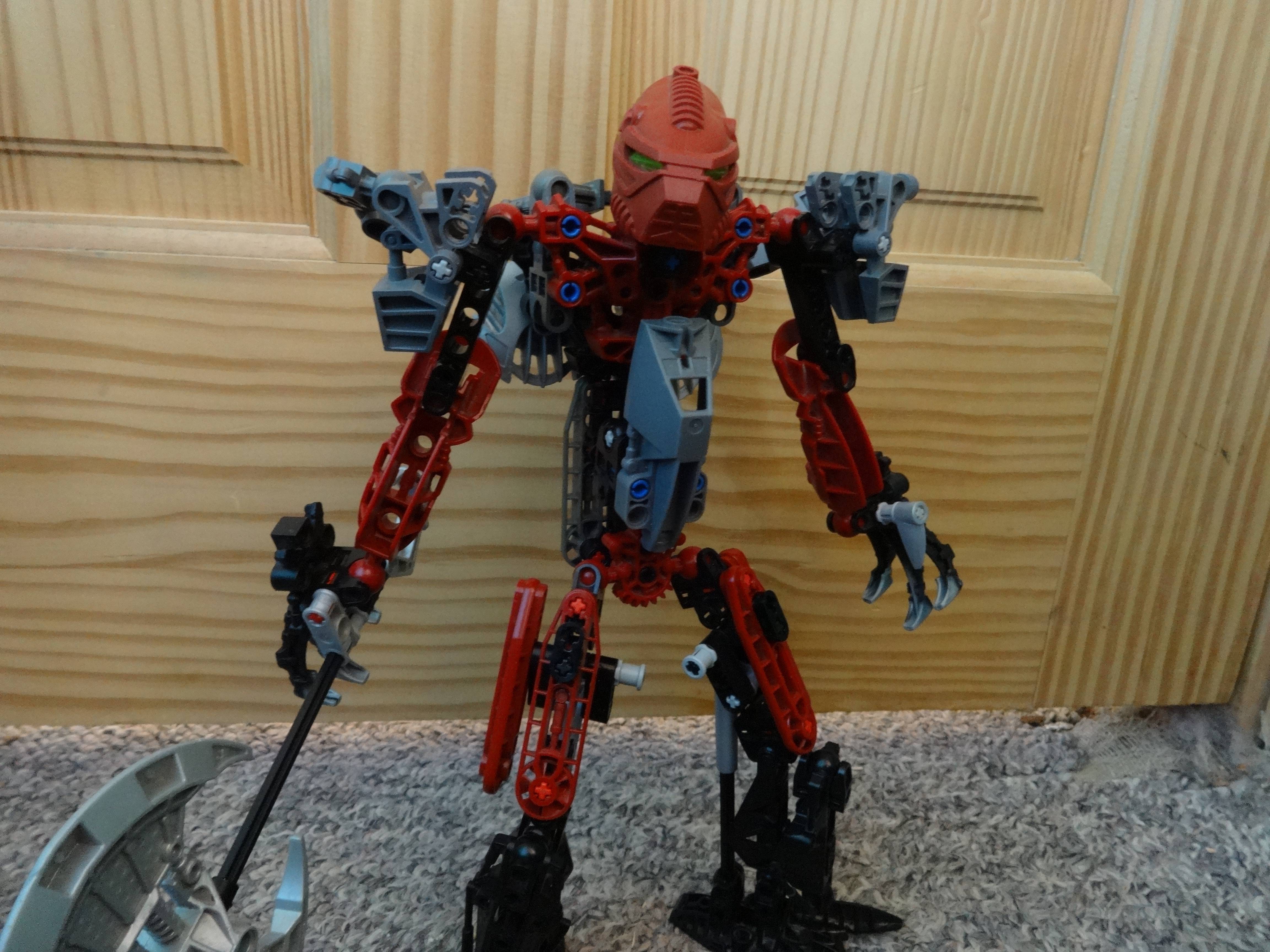 As you can probably tell, there will be a story for all of these MOCs. Hopefully I'll get working on that more soon. I've got it started, but it is not ready yet.

I have read this over multiple times, but I have missed an error. Please let me know if you see any vocabulary, grammatical, or punctuation errors and I will fix them Asap.

Blixt is a pretty interesting MOC! I think the colours are balanced pretty well here, but I think you could add more blue to the lower legs. Speaking of the lower legs, the armour sticks out too much in my opinion. There are also a few empty spaces around the torso and there's an odd gap between the two pieces of armour. I like the arms, however. Although I think they could be improved with a bit more bulk on the shoulder. Overall I'd say Blixt is a good MOC, but could be much better with some general improvements.

Averrio suffers from many of the same problems that Blixt does. The distribution of the armour and colours on the MOC could be improved greatly, but I really do like the look of the Metru green, black and grey.The Piraka foot on his chest could be flipped upside-down and would make the chest look a lot more appealing. I also think the arms are too long and stick out too much. Again, some fairly small improvements here and there and this would be a great MOC!

Vardun is definitely my favourite of the four MOCs you've posted. Although you could have a bit more black around his torso, the colour scheme is good. Some silver Metru thigh armour would go well on the legs with the other pieces of armour you have there. The torso, like Blixt and Averrio, could use some more filling up. But generally this is a well-rounded MOC and is pretty good.

I also like Warrius. I'm not a fan of those claws, but that's just my preference. The shoulder armour is interesting, but looks quite empty from the front, as do parts of his torso. I like the look of the legs, though. Those are pretty nice.

Overall you've got some good MOCs here, and with some touching up I think they'll look great!