The Rise of the Lord

"The Agori who would be king was no prince or gladiator rather he was a merchant, one who had a very persuasive nature and this allowed him to trade with any group even the Skrall witches one of whom would later become his wife. He was resented in his village due to him making this choice but he still traded goods to them for discounted prices in a vain attempt to repair relations with his people.

The disease came and left the village weak and on a moonlight night the small village was raided and his wife was taken by Bone Hunters who also hated the Skrall witches so they sold her to Game Master and he threw her into Atero arena.

The lone agori could only watch from the stands as his wife repeated the three virtues and was cut down by Vastus who raised his hands and the crowd cheered as the witch’s heart light slowed and stopped and she was dragged off to be disposed of. A cloaked figure noticed the crying agori and feeling his pain the shadowy figure ordered her body collected and had it rebuilt and reconfigured by the healing waters and stored inside the Mark Two Robot under the code name Mata with the five other guardians. She lived on and the cloaked figure smiled knowing they would meet again.

What couldn’t be predicted was the lone agori stealing the elemental shard of iron and destroying six empires. This frightened the great ones and they launched Mata Nui. The figure having a taste for the dramatic sealed himself in the robot after stealing the mask used to banish the Lord and giving it away only to rip it off Brutaka’s face so many years later to summon his scion of rage."

Pros: Story is good.
Cons: The pacing is too fast. If this is the only update, then make it a worthwhile read. Multiple paragraphs, character introductions, all that stuff.
Verdict: 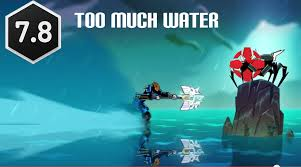 7.1 it’s a pass and it will pale compared to what I got saved up for The Elemental Lord, for one an actual name and a moc whose body currently rivals the size of a humans and a entire story that brings multiple universes into the fray, shows the fate of the G1 universe and the creation of Okoto this story was told as a campfire story the last one was but I’m done with legends on to the main event.