So I had an idea that, because the Skull Scorpion appears to be a numerous creature in Kulta’s army, it was once a living creature native to the Ancient City 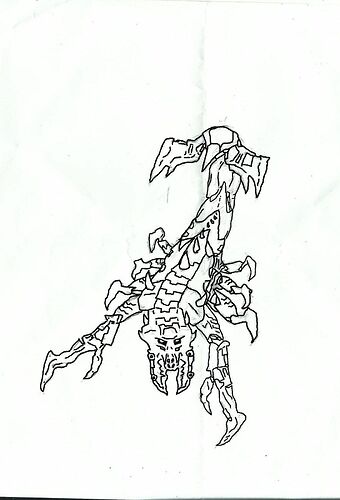 The Serket was a large arachnid-like creature loosely related to the Skull Spider species. Native to the dry outskirts of the Ancient City, it was believed to have gone extinct following Ekimu and Makuta’s fight, though several have reported sightings in the Region of Stone. Large numbers of the species would later be resurrected by Kulta as the Skull Scorpions.

Behavior and Habitat: Based on scriptures recovered from the Ancient City, The Serket was described as being tremendously hostile towards any outside activity, not letting its guard down until the victim was either paralyzed or dead. Despite this, records have shown that the creature is very exclusionary during the day, suggesting it may have been more active during the night.

Info on the creatures habitat is mostly unknown, outside of residing in the ancient city most have speculated it may have nestled in large crevices or sat out near large rocks

Diet: Because of its size and predatory nature, The Serket was believed to have hunted whatever moved in the dry regions of The Ancient City, though several carvings have shown the creature primarily attacking what appeared to be Skull Spiders.

Relations with Villagers: Mulitple carvings recovered from the Ancient City showed that The Serket was very popular amongst the ancient villagers, particularly chieftains, who would use the scorpions tail plates as a cosmetic to show their ranking. It was also shown that the creatures tails and head plating were effective tools in gladiatorial combat, the famous Skull Slicer believed to have used a axe fashioned with the tail during his early days as a fighter. Serket’s were also captured and placed in cells to execute criminals or guards deemed unworthy.

Supposed extinction: Because of its popularity amongst the villagers of the Ancient City, Serket numbers were dwindling even prior to the battle between Ekimu and Makuta. Due to the creatures deadly nature though, many considered it a threat, thus a bounty was placed on the head of the creature and a reward would be offered for every dead Serket. Towards the end of the peoples stay in the Ancient City, Serkets were presumed very scarce in number, and following Ekimu and Makuta’s fight many declared it was extinct. However, the Protector of Stone believed to have seen one on his journeys with Pohatu.

Wow. I never expected to get such an amazing, in-depth writings of the Skull Scorpio. Wow. I1m amazed, in the good way of course. Great job!