The Shadowed One, leader of the Dark Hunters. 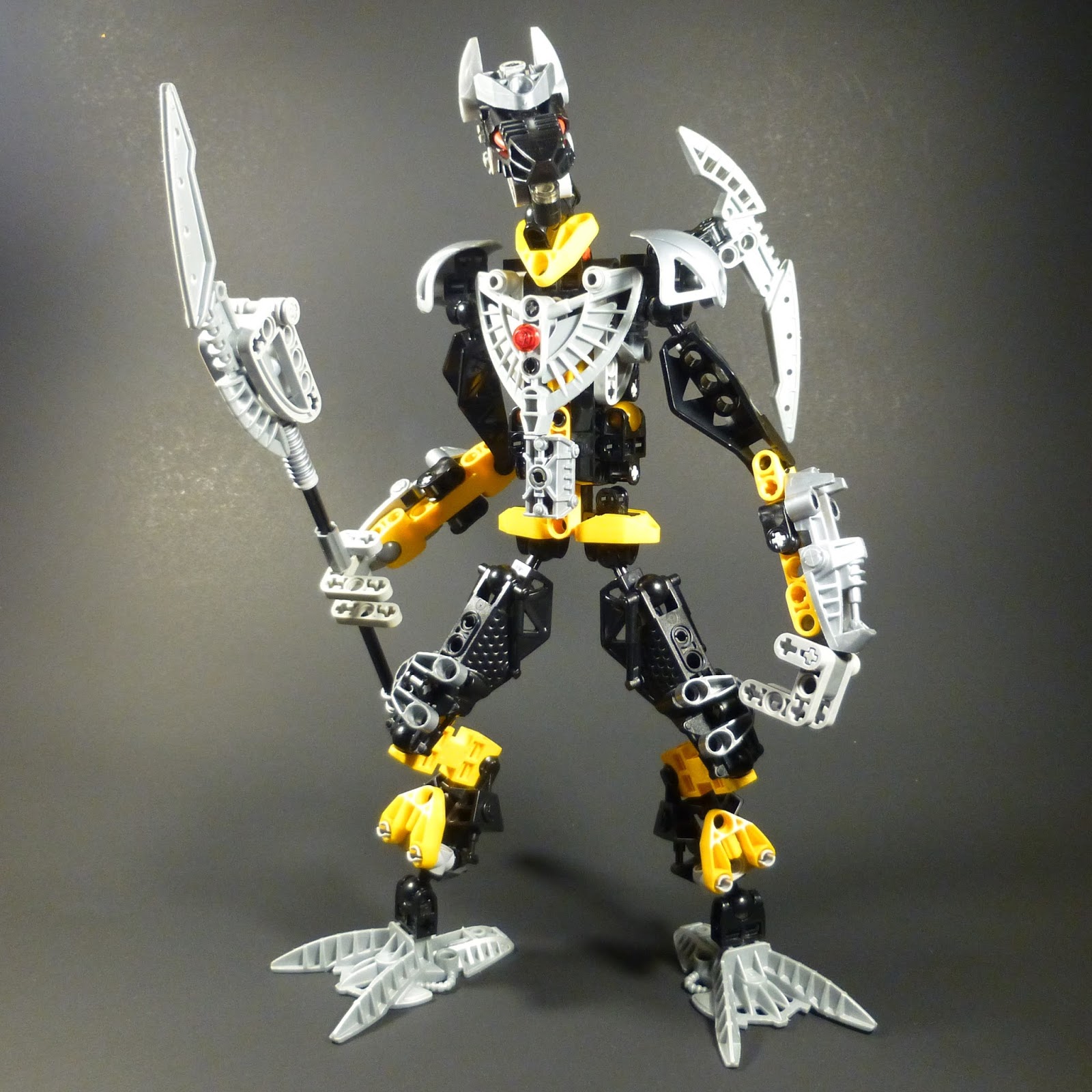 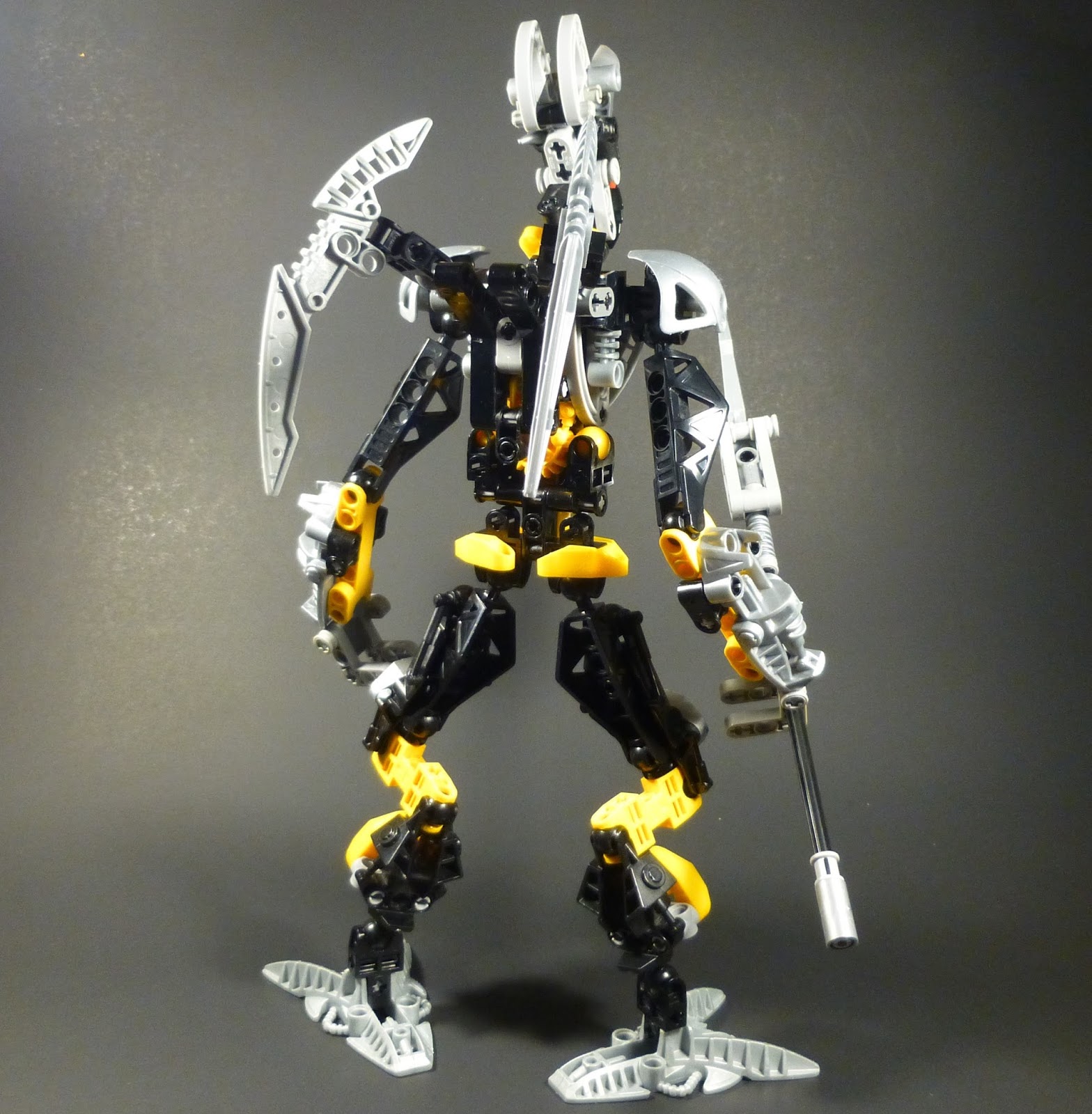 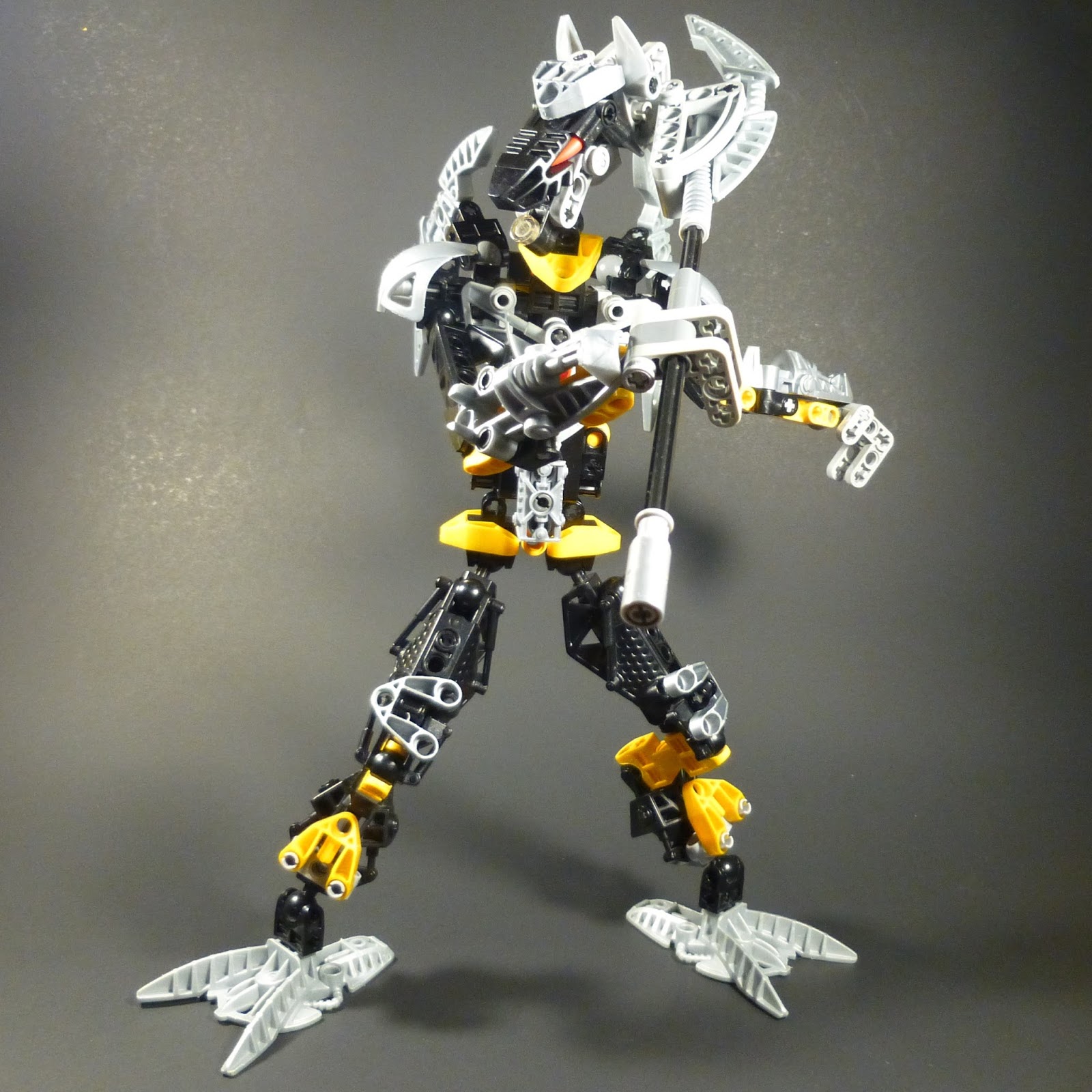 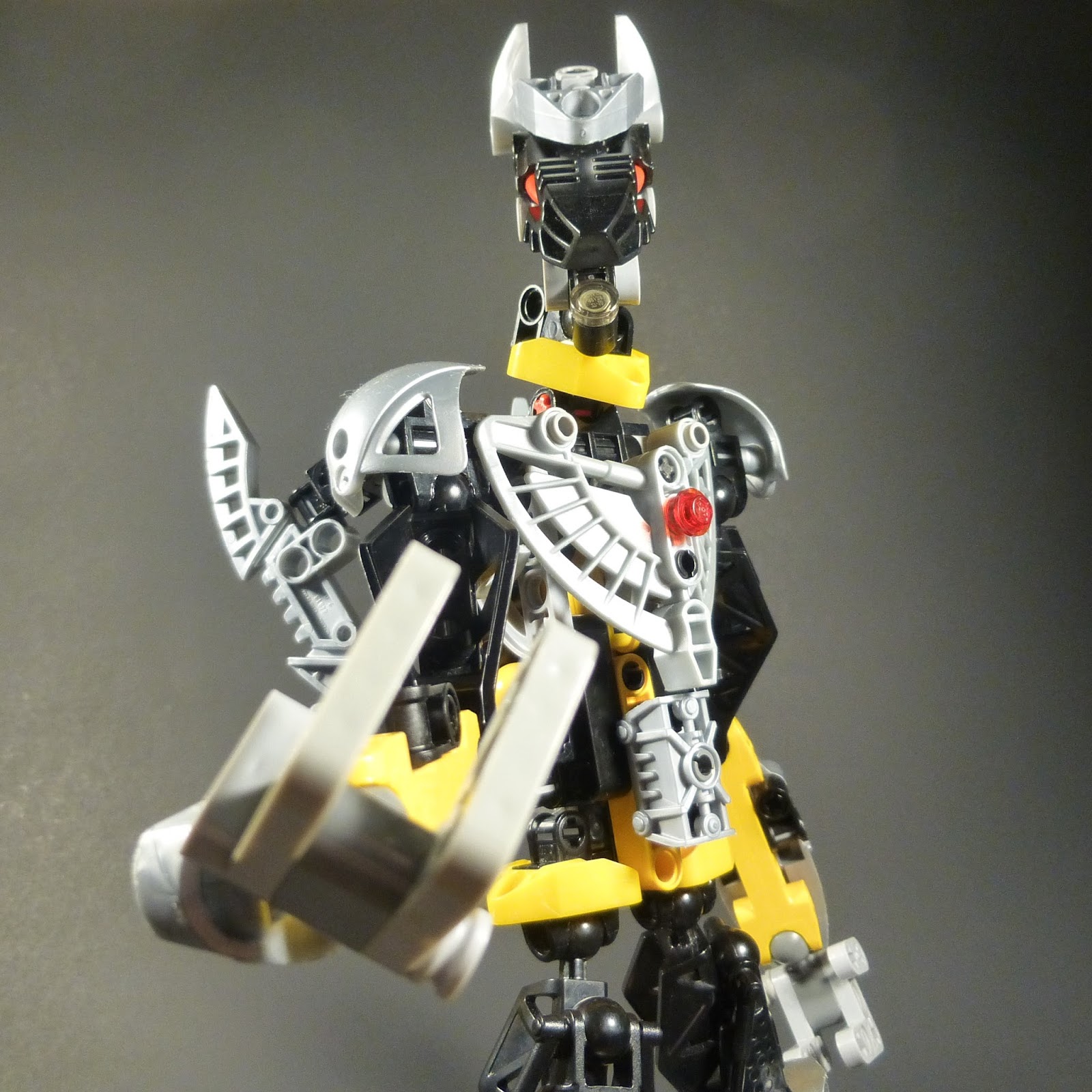 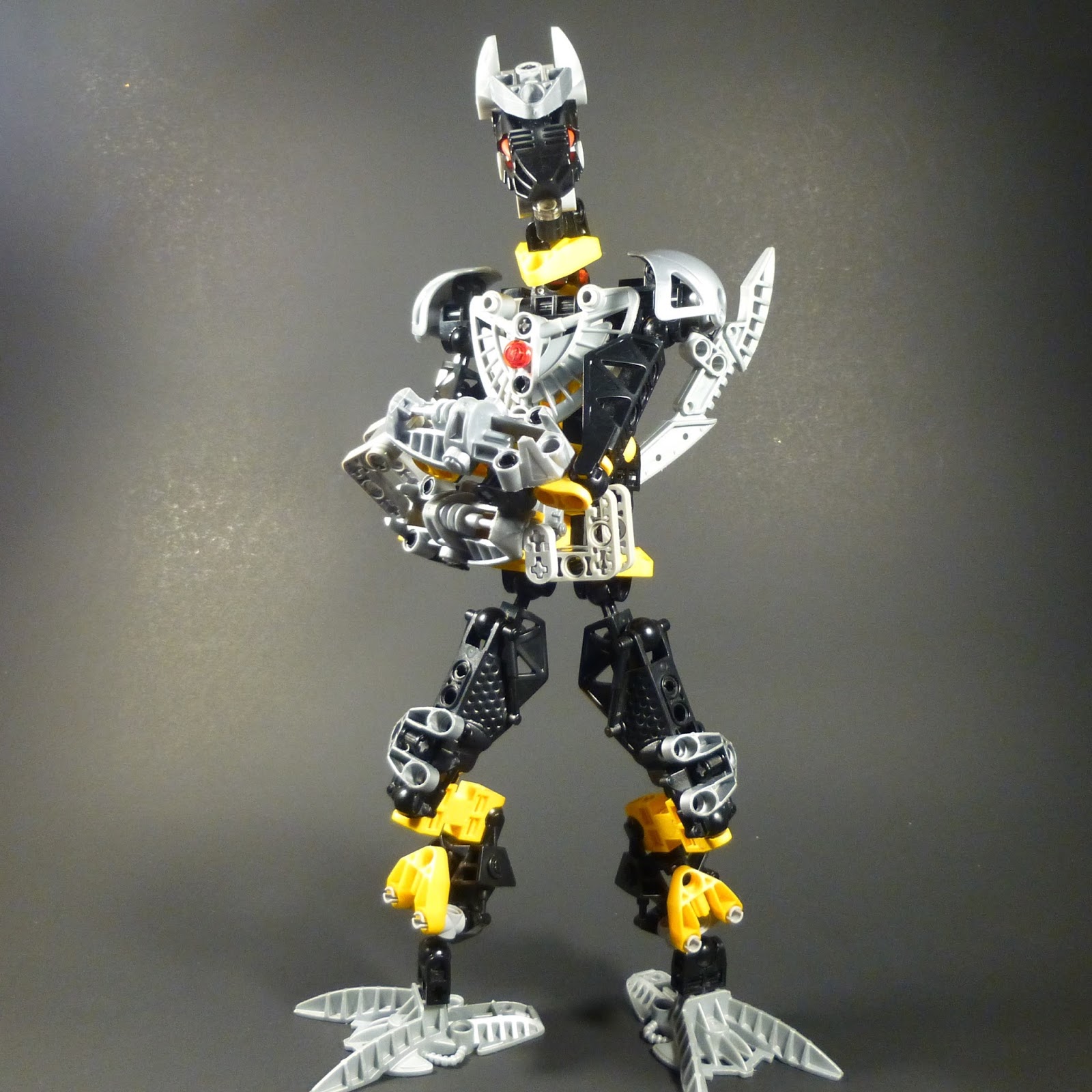 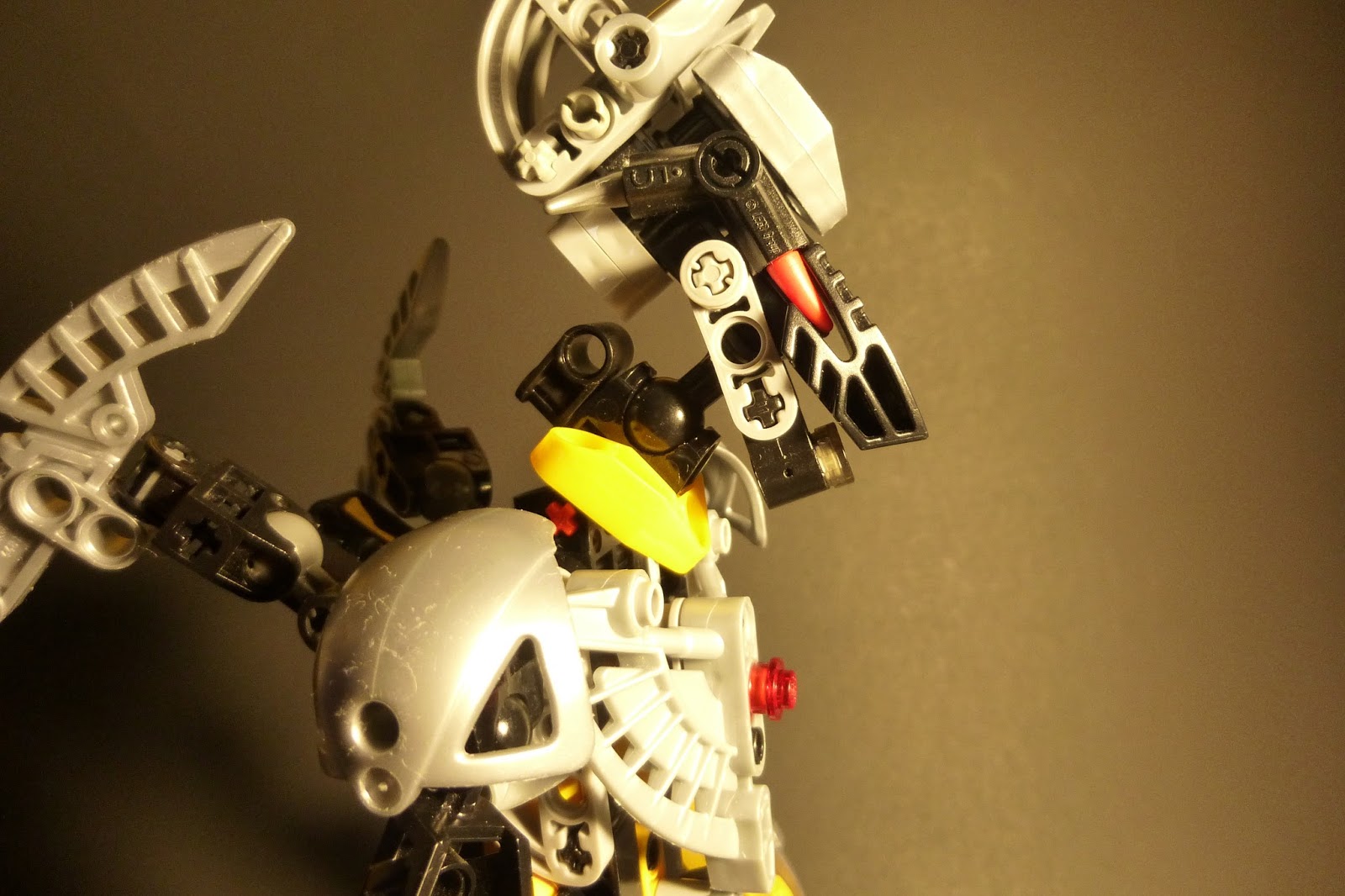 And his Staff of Protodermis. 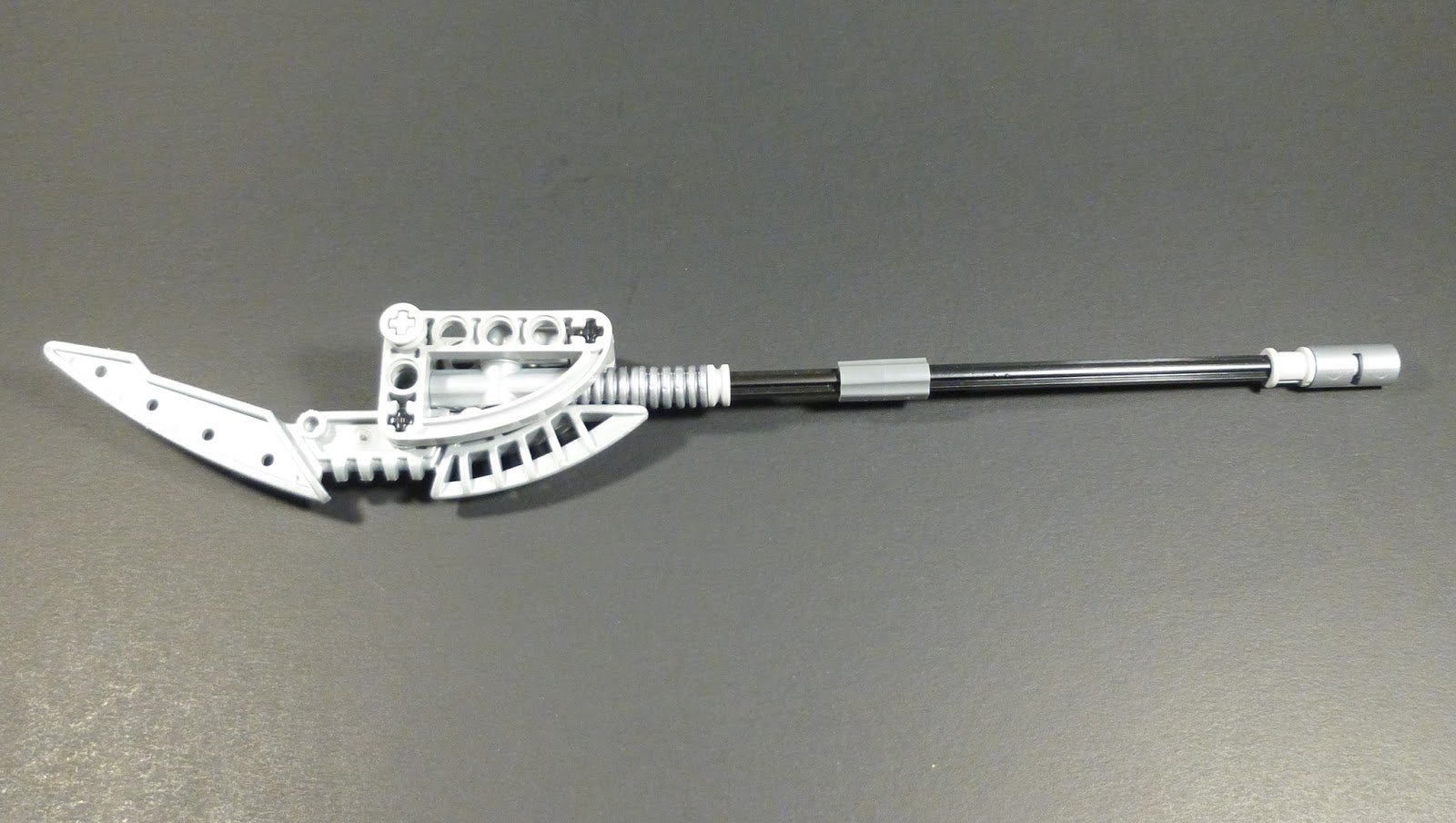 I built this after looking at the pictures of the Shadowed One again recently and finding that it is a pretty… lackluster model for the supposedly feared leader of the Dark Hunters. I also built it to kind of match how I pictured him while reading BIONICLE Legends #4: Legacy of Evil recently.

It’s an impressive well-built model…but I still feel that he looks weak, lacking the grandiosity that his reputation suggests.

He’s supposed to have a tail…

Aside from the painful hips it’s alright, could be bulked up a bit though.

That can’t be TSO, it doesn’t have three legs.
/s
Seriously, though, it looks more like a yellow Vortixx with a Neck Brace.

Legs: The double-jointed legs, combined with the frog feet, make him look very reptilian, not very fitting for TSO. At the very least, he needs different feet, and I would give him normal legs, but that’s just me. Whether you change the legs or not, though, they could stand to be bigger. Two nitpicks: the silver armor thing on the upper legs looks rather odd, would suggest turning it either up or down, and the hips limit articulation (doesn’t effect looks, though, so that one’s up to you)

Torso: the torso works, I never have liked Nuva hands on the sides of torsos, but that’s just me. Only thing I can say is to suggest moving the heartlight (I assume that’s a heartlight) up one hole.

Arms: Same thing I said about the hips, the shoulders limit poseability, but since that doesn’t affect looks, you can keep them that way if you don’t mind it. I do like the hands, perhaps you could try to find a way to have the staff in his hand instead of through the fingers? Also, I think the lower arm would look better I the Metru Foot was facing the other way, but that’s just my thoughts.

Head: sure, the original TSO had a long neck too, but it was partially hidden by his big shoulder pads. Perhaps you could do something similar with the wings (I think those are wings) and make them a bit bigger to help “hide” the long neck.

Given TSO’s original design, that was probably intentional. 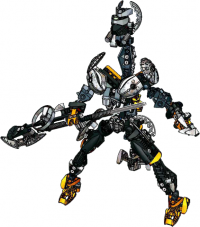 I mean, look at this dude, he’s practically a giraffe

It looks very good,but it looks weird without the 3rd leg tail thingy the original model had.

So I’m going to take all these into consideration and upgrade this MOC.

It’s a great MOC, but I like the old Shadowed One’s fingers better.

Very nice! I like how it fits in with some of the older G1 Bionicle sets very well.

Like others said, needs a tail. Those hands I’m not a fan of either. They’re clunky and too thin, IMO. I think if you incorporated some of the original design (like the legs and head) this could be good. I do suggest keeping the torso though.

Besides the neck, this looks really great! Nice job Invader!

I’m getting a strong jackal-like vibe from this guy. Even though I’m not totally sure about the jagged design in the hips, I love the waist; good use of y-joints! All in all, a solid MOC.