First post on the boards and it’s going to be a big one, so strap in.

Now the reason the Brothers and Voriki are under the same topic is that my pitch(?) involves them having a shared history. But before we get to that, I must first give some characterization to the Three. 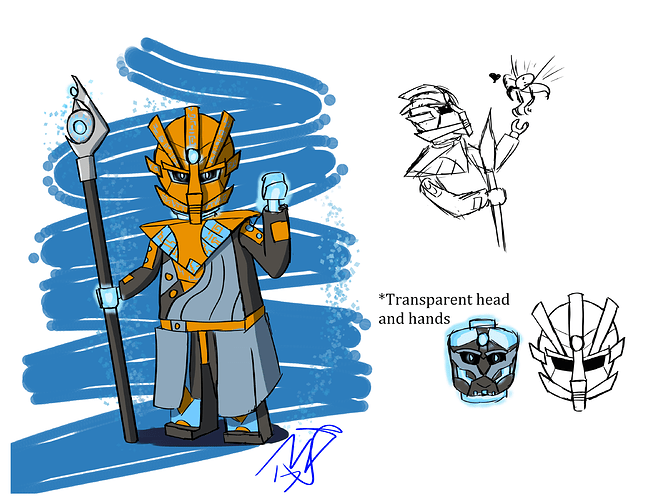 Ekimu acts like a peaceful monk; he has a strong appreciation for life and often observes his creations with child-like curiosity. However, his imagination is like a loose cannon; many times Ekimu will indulge himself creating whatever he can think of, wanting to see if it can exist in their world. Ekimu is very mellow and soft-spoken; despite the fact he wields the powerful Mask and Staff of Creation, he prefers to discuss and compromise instead of aggressiveness. 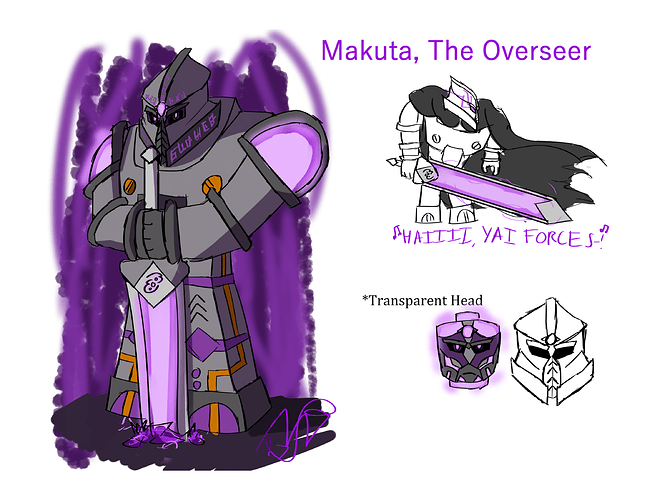 Makuta is the authority amongst the brothers. He aims to keep everything in balance and under control. He must often oversee Ekimu’s creative processes, to ensure his brother doesn’t create anything too dangerous. He takes pride in his power as a deific being, and with the Mask of Control, he maintains that he has dominance over all below him. Yet, Makuta holds mistrust in the Elemental Gods, fearing they will try and overthrow him.

And yes I basically gave him the Dragonslayer from “Berserk”, shut up it’s cool. 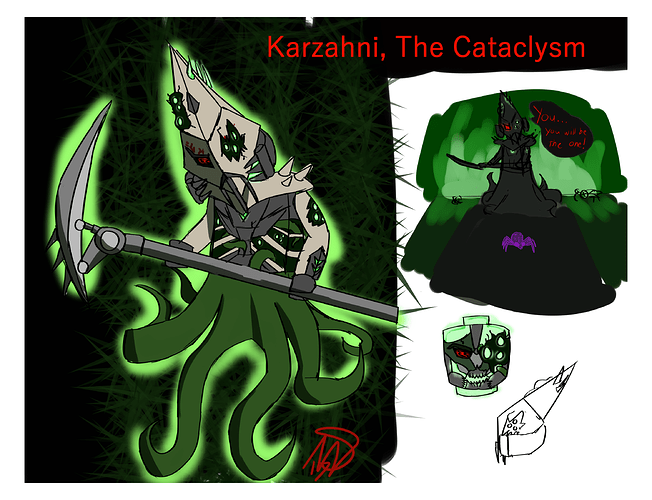 G3- Karzahni (small size).png3000×2300 2.58 MB
Karzahni is very different compared to his brothers. His appearance alone is not of a godly stature, but a horrid nightmare. He acts distant to his brothers; Karzahni has no cares for power or Ekimu’s creations. He is obsessed with knowledge and truth, and his Mask of Alternate Futures allow him to see all the potential futures and realities that could occur. However, this slowly begins to drive the deity into madness, with seeing so many different realities deteriorating both his mind and body.

Now with that out of the way, let’s get to the good stuff.

Voriki and the Fate of the Lightning Village

It begins with Ekimu’s creation of the Matoran. Makuta is concerned about the idea of sentient beings, but Ekimu convinces him to do a “trial run”. The Matoran inhabit various locations of the island and begin settle into villages, while Makuta and Ekimu kept themselves hidden and observe.

Eventually, the Elemental Gods take an interest in the Matoran, subtly guiding them and grant the villagers minimal access to their powers. Makuta, while irritated on the gods intrusion, allows the trial to continue. It is not until the God of the Lightning selects a Matoran to act as their vessel (The Toa) that Makuta finally draws the line. He demands that his brother abandon the experiment, but Ekimu refuses; he has become fascinated with the Matoran, and even has made their presence know to them. The brothers get into a heated debate.

Now while this is happening…
Karzahni, in his mad studies and observations, has come to a chilling conclusion; nothing he, his brothers, or anyone, can affect the causality of the universe. And worse, every reality he has studied involves his own demise. The nihilistic thoughts tear away at his remaining mental state, and his solution is destroy anything to affect the causality. He starts with small animals, plants, rocks; but nothing works. And then it hits him.
The Matoran.
While he had no cares about Ekimu’s new creation, he knows that they are the most significant creatures on the island. Thus, it should have an impact.
And with that, he attacks the closest village, [insert name here], the Village of Lightning. 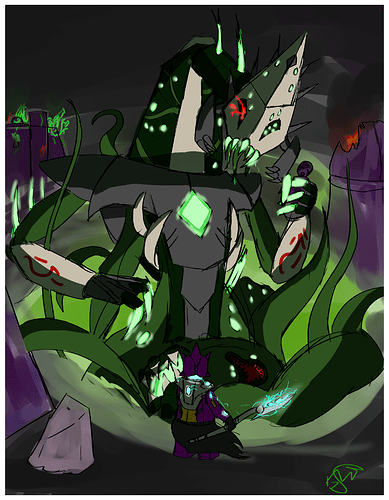 Karzahni uses his powers to become an eldritch abomination, and begins his onslaught on the village. Toa Voriki goes to fight this “monster”, confident in her lightning power. But the corrupted brother has immense and terrifying powers, and she is quickly defeated. Karzahni continues until all the matoran and structures are destroyed. Before he can continue to another village, Makuta and Ekimu finally intervene. They seal their brother back under the earth, stuck in his monstrous form.
Makuta, taking the Mask of Time, tries to undo the Matoran creation, in hopes of adverting this catastrophe. However, the Elemental Gods now arrive, disgusted with the brother’s negligence of their own creations. They overpower the brothers; Ekimu is killed (or placed in a “sleep” state) while they use the Mask of Time to seal Makuta in a bubble of stopped time (where he is still alive but cannot do anything).

Voriki, the sole survivor of the Lightning tribe, goes into extreme grief and shame, and she seals off herself and the ruins with an endless lightning maelstrom. Eventually, the other Elemental Gods leave their sister to her solitude, and select their own Toa to defend the island. The other nations eventually forget the seventh element, and Karzahni remains unknown to all the inhabitants of the island.
Except one.

Fast foreward to present day G3. Voriki eventually catches wind of Makuta returning and decides to help the other Toa. However, the many years of solitude in sorrow and anger have made her a bitter and vengeful being, one who has never learned the virtues of the Toa. She only helps the others since she is aware of Karzahni, and is using them to release him so she can have her revenge. Her deception obviously makes the Toa team not trust her. She eventually will have to choose to either satisfy her revenge alone, or finally become a true Toa.
Makuta, after being free, wants to now rule over the Matoran, capture the Elemental Gods and revive Ekimu. He believes that his control will end any future disasters to the island.
Karzahni is almost on pause; the moment he is released from his prison, he will continue his onslaught of chaos and destruction to the island.

phew.
And there we go. I have to say, I’ve been loving this Brickonicle project, and I might have some more ideas on the way. I appreciate if you made it to the end, and feedback is always welcome.
-DarkMaestro

The art and story all are fantastic. I just have one complaint. I’ve never imagined G3 Makuta as such a big and bulky character. All else is great!

Dude these designs are sick. My favorite one has to be Makuta, of course. Somehow you took his G1 design and made it into something new and absolutely unique.

Karzahni is definitely more terrifying than G1. Seriously, the mask and the body and even the squid legs are amazing.

I really like the Makuta and Kazahni designs, like there just so good. I also really enjoy that they all look distinctive

Thanks, glad you liked it!
For Makuta’s legs I imagined either some stud pieces were put on his feet or a custom leg piece; kinda got a bit lazy showing that in artwork. But definitely not Woody legs. That would make proportions a bit weird.

I love the designs of all the minifigures

Ooh, I like a lot of the ideas here, especially the descent of Karzahni into madness so that he isn’t just mad for the sake of being mad.

There hasn’t been any set with transparent minifigure hands yet to my recollection.

The art and lore here are both incredible! Love it!

I must have been thinking of the transparent pirate hooks, like this 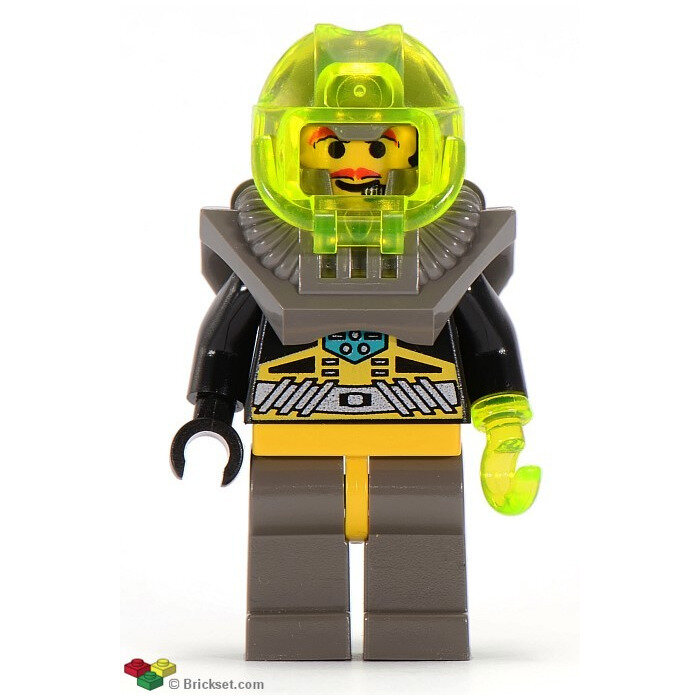 But they are the same plastic, aren’t they? Which wouldn’t rule out the possibility entirely for powered-up character hands.

And yes I basically gave him the Dragonslayer from “Berserk”, shut up it’s cool.

Also, I guess Karzahni is the struggler against the flow of causality?

Ekimu looks very nice, Makuta looks imposing and powerful, and minifig Karzhani is… meh. Monster Karzahni, however, is amazing. I like how you kept the 2007 head design. Excellent work!

The karzahni design looks like it takes a lot from my minifig design.