This is going to be a huge post, so be forewarned.

This is a toa team based around the Golden Armour (henceforth called GA), which I’ll explain in the first entry. 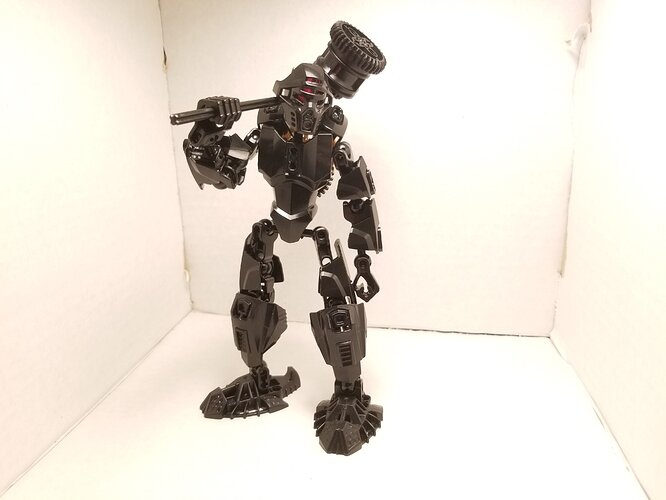 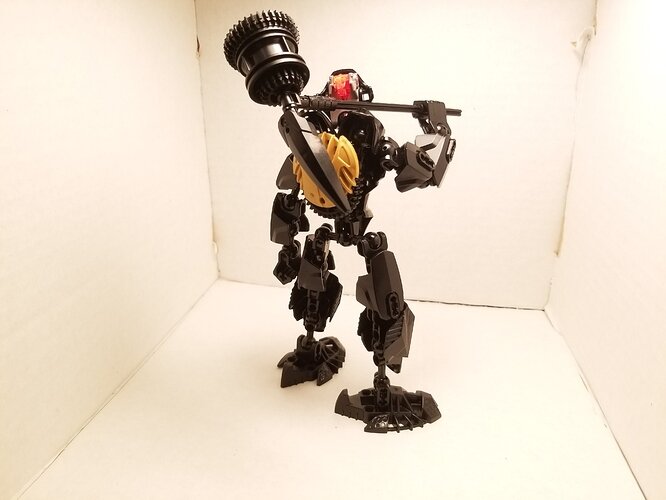 Obligatory front and back. 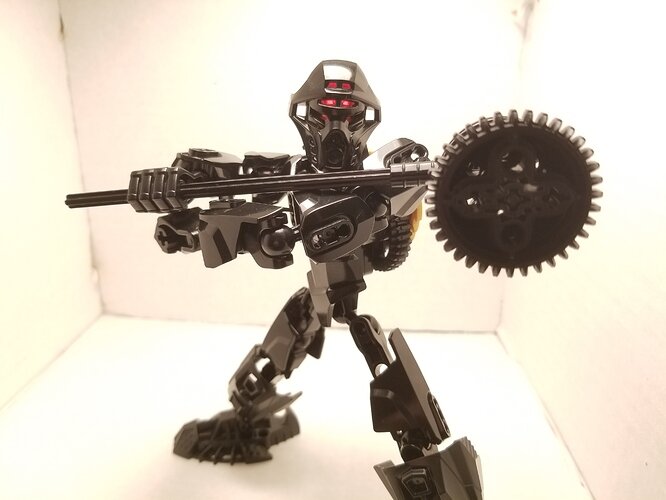 Name: Acron
Species: Toa of Earth
Kanohi: Strength
Golden armour piece: Shield
Weapon: War hammer
age: about 32
Bio: The leader of the team, he was the first to discover a piece of the GA. He works as a member of the guard of Atero Nui. He hid the Shield in his house, but one day, he slipped and it attached it’s self to his back. When he went to work the next day, the captain told him to go to the elders, who told him of Vakama’s last prophecy, in which the golden armor, which had been lost years ago, would be rediscovered, and needed to turn back the darkness yet again. he was sent by the elders, along with his faithful page Hilktio, to travel Spherus Magna to find the other individuals who had GA pieces. 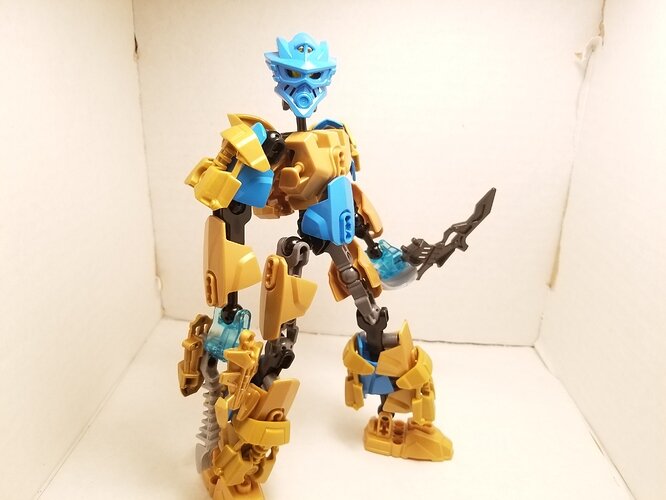 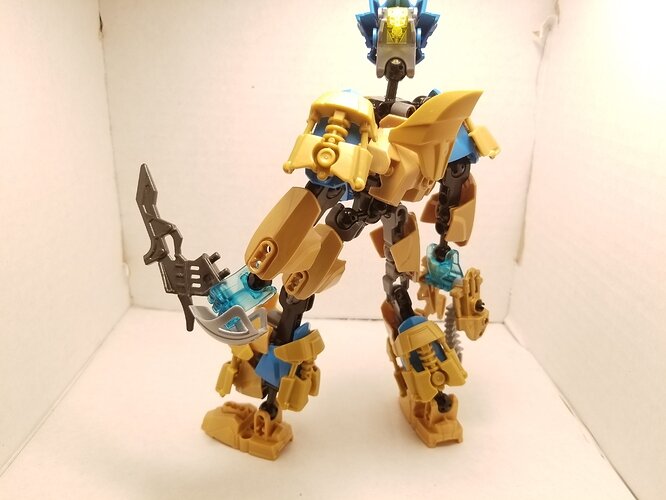 yet another Front and Back. 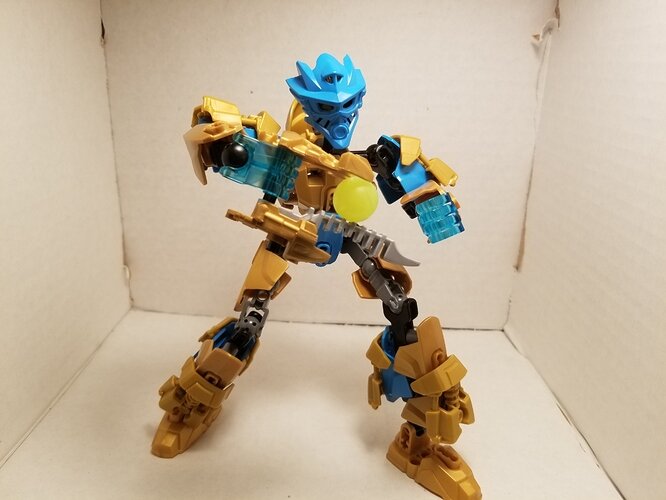 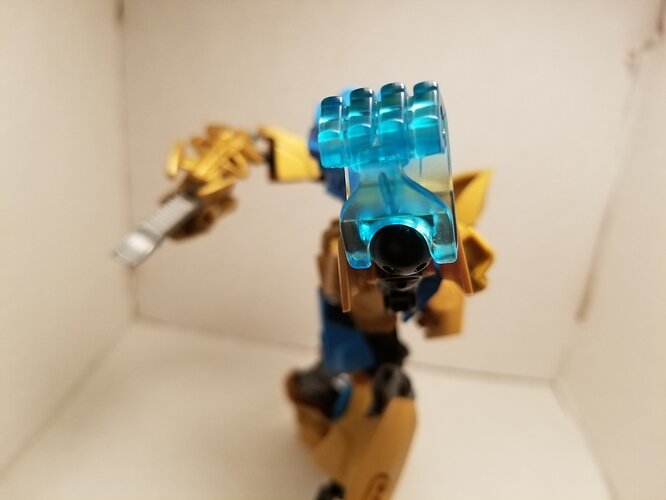 Name: Pilokiae
Species: Toa of Psionics
kanohi: Teleportation
Armour piece: Chest armour
Weapon: Psi amp, and a Dagger
Age: About 25
Bio: Pilkiae was the first Member discovered by Acron. She was found in the city of Roxtus, where she was working as psi-comm. A Psi-comm is a being using psychic powers to send messages long distance. She caught their attention, when, after the GA piece attached it’s self to her Psi-amp, she accidentally sent a message to the entire city, and several other cities, a feat never preformed before, and that hasn’t been done since. The effort nearly killed her, and Acron and Hilktio spent several days nursing her back to health. 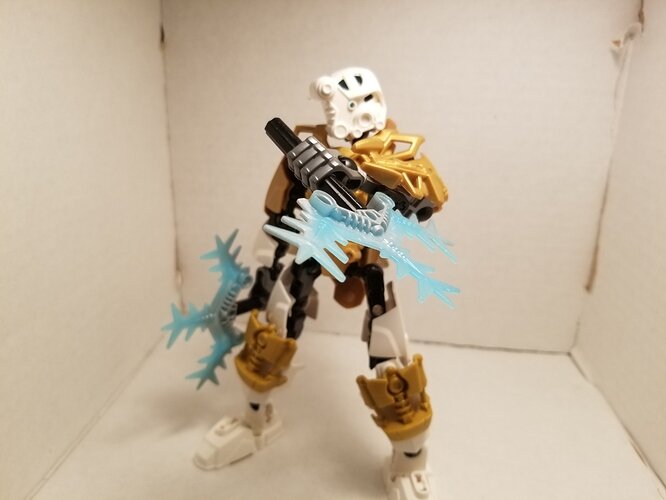 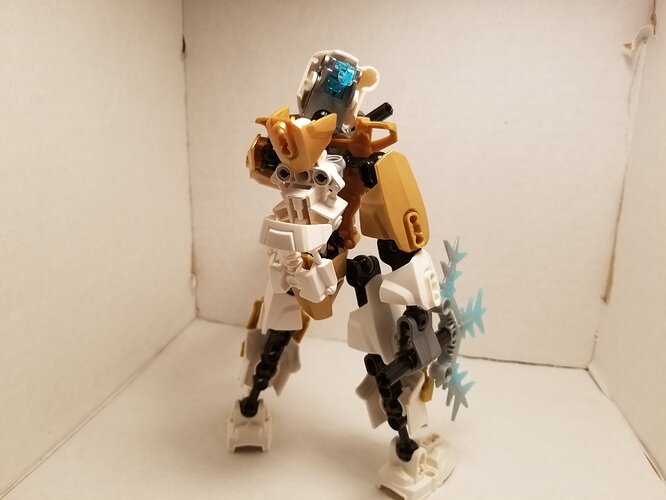 Front and back again. 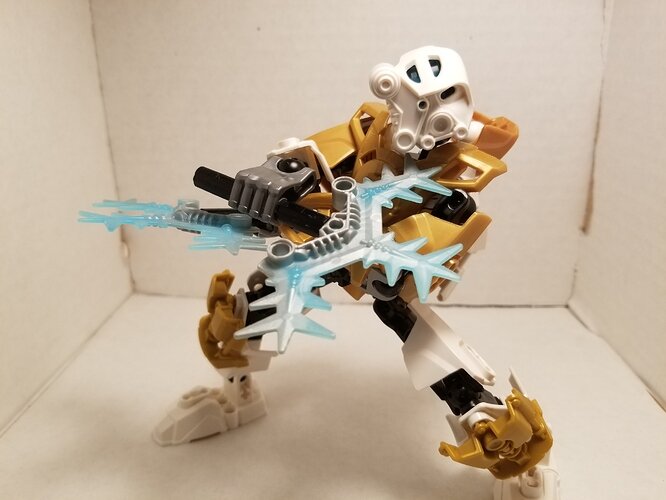 Name: Frotill
Species: Toa of Ice
kanohi: X-ray vision
Armour Piece: Left arm.
Weapon: Tri-pointed daggers
Age: 43
Bio: Frotill was the second member found. He was discovered while saving a matoran form a rahi attack, and using the Kraata powers to fight it off. He was also in Roxtus, in the shady part of town. His age dates him a bit, but tries to use the modern slang to relate to the younger members of the team, but just manages to show his age. He is missing his left fore-arm, but why is something he won’t share. 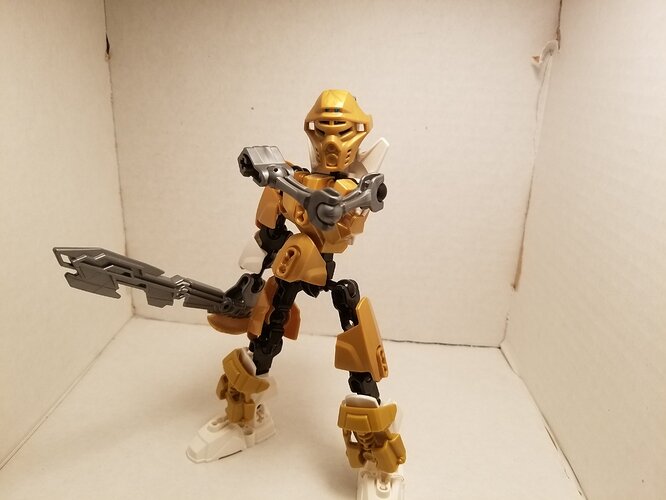 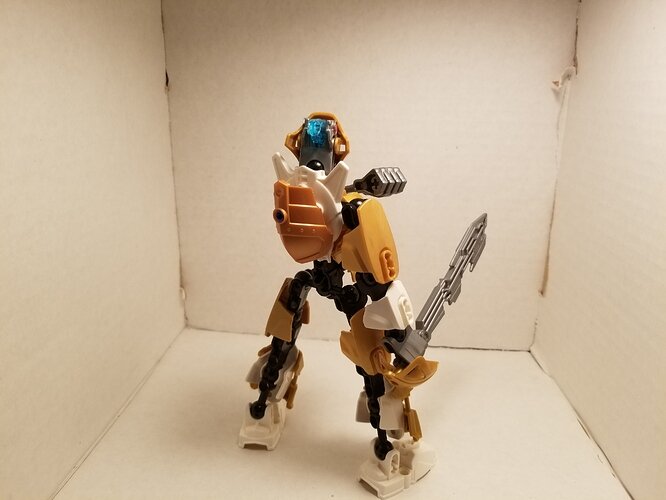 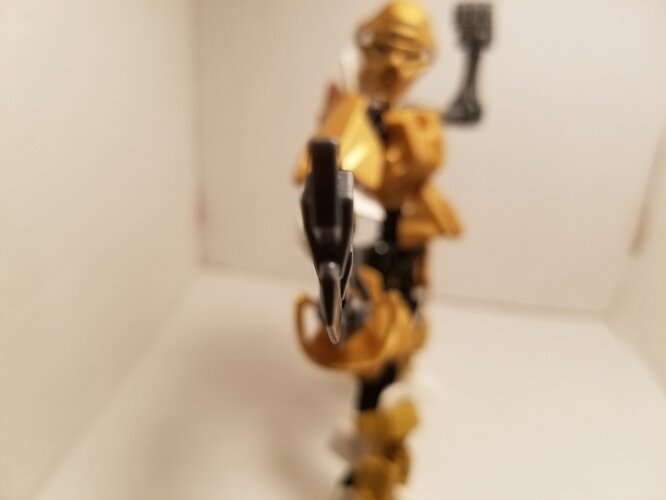 Name: Radia
Species: Toa of Ice
Kanohi: Strength
Armour piece: Hilt
Weapon: Hooked sword
age: 34
Bio: Radia was the third found by the group. She was a combat veteran, living in Vulcanus. She was a member of one of the patrol teams, sent to look for Bone Hunter activity, and they found it. During one such fight, she lost her left arm, causing her to be released from service. She now works as a fencing instructor in Spherus Magna’s finest combat school. She was discovered when Hilktio decided to take a fencing class while he was in Vulcanus. During the class, he noticed the odd hilt on her sword, and brought her to meet Acron. 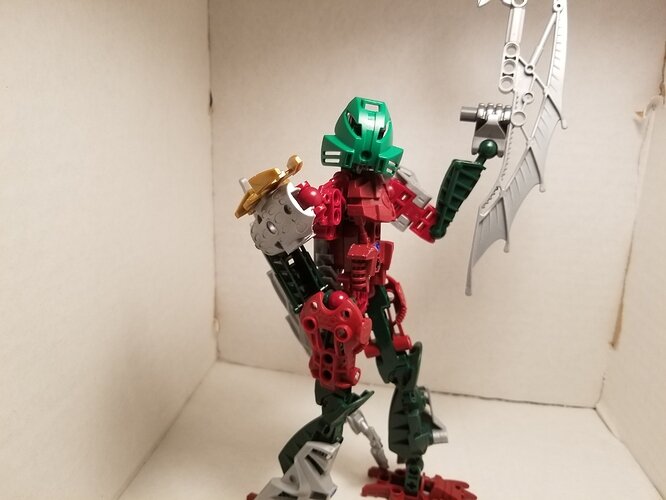 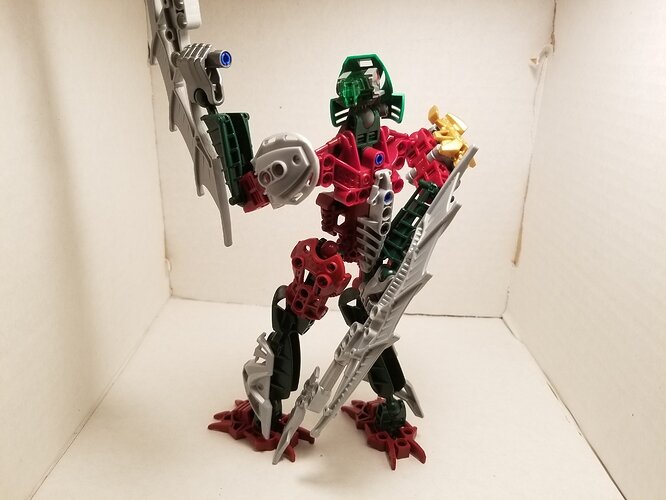 Do I even have to say anything at this point? 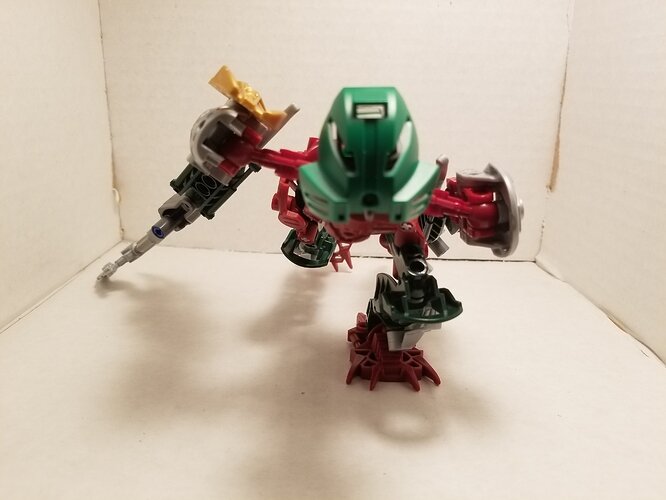 Name: Tilaukar
Species: Glatoa (Explained below)
Kanohi: Kakama (Classic mold)
Armor piece: Right arm
Weapons: Double wind blades
age: 23
Bio: Tilaukar is a Glatoa, a new species created by the cross of a matoran and agori. They have the colors of their parents, and inherit the ability to use Kanohi, but no elemental powers. One odd note, is their masks take on color at random, as they have no elemental affiliation. Tilaukar was living in Tesara, where he was studying the forms of the great hero Gresh. He is strongly invested in his traditions, going the with traditional designs for kanohi, and studying the great hero’s of the past. He wears a kakama for the sole reason that it almost matches his color scheme. He was found when he was practicing and he almost cut Radia’s head off by accident. 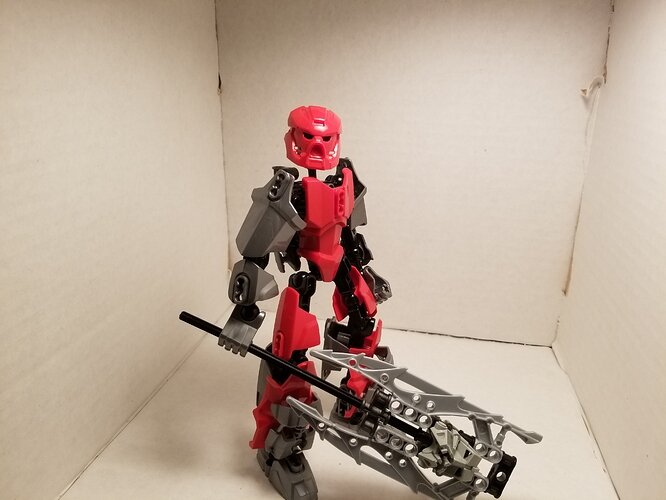 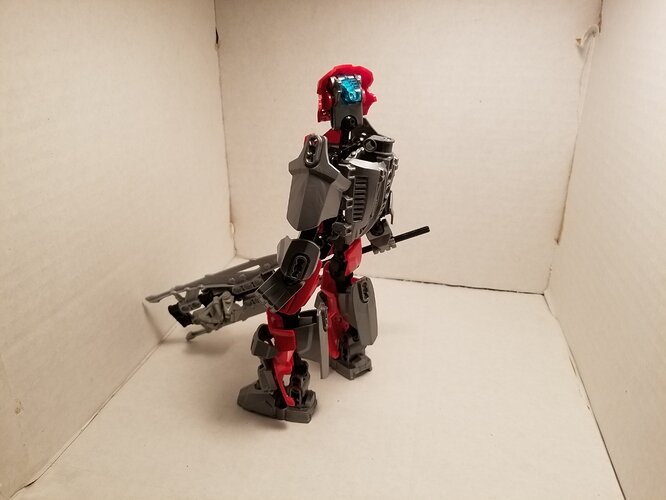 You know the drill. 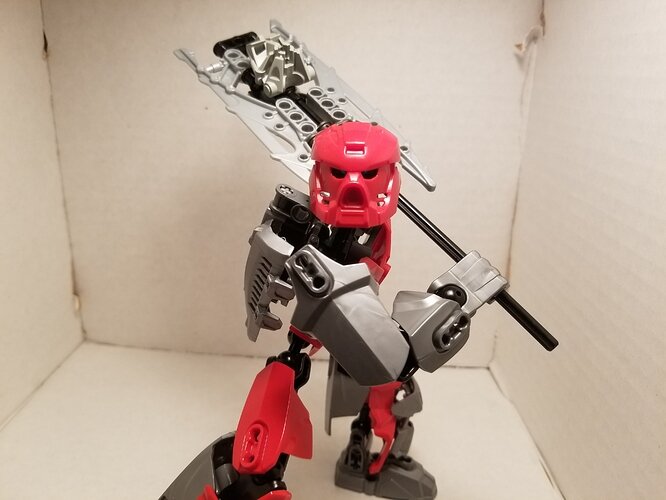 Name: Hilktio
Species: Toa of fire
Kanohi: Shielding
Armour piece: none
weapon: double edged axe
Age: 16
Bio: an eager young toa, and Acron’s page. He bears a silver armour to show that he is still in training. he looks up to Acorn like an older brother, and will go to great lengths to please him.

You may notice I’m missing some fun pictures. Well, worry not! they will be posted in separate topic, seeing as this post is WAY too long as it is.

Comments and Crits, as always, are welcome.

They are a bit too simple, buy I like them.

They are all cool!

Thanks, but their not for sale.

Those are some of my initial thoughts. Let me know if you’d like me to critique the other 4 in-depth.

Nothing that wouldn’t break the color scheme.

break up the black?

Other than red, Not really. I like the almost pitch black anyway.

CCBS parts to bulk them up?

Nope. Not in gold or blue.

tighten up her color scheme a bit?

I wish I could. But most of my black hands are sucked up by models for the Bionicle Eternal project. The last pair of black hands were used on Acron.

that up a bit?

No ti in gold. Unless there’s a gold small tire.