The following team was created for the following collaboration: Canon Toa Team Collab-Open to sign ups

May I present to you, the team which once held among its ranks the Toa of Earth turned Hordika now known as Savage, the Toa Lyta. 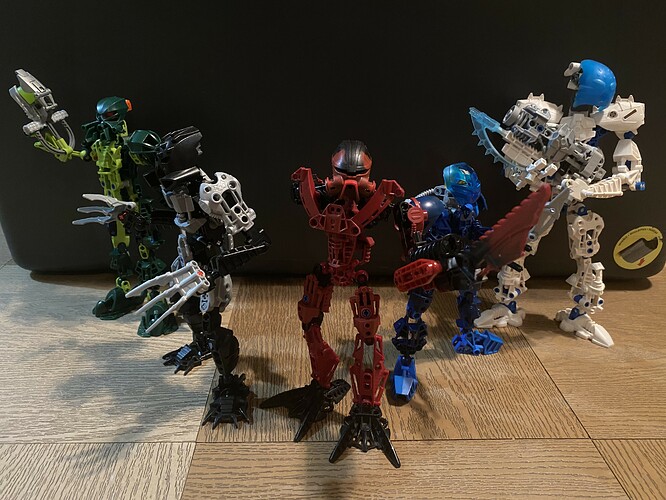 IMG_06334032×3024 2.22 MB
Hailing from various walks of life, the Toa Lyta may not appear to be a part of the same team, but their ability to work as an effective unit cannot be overstated. 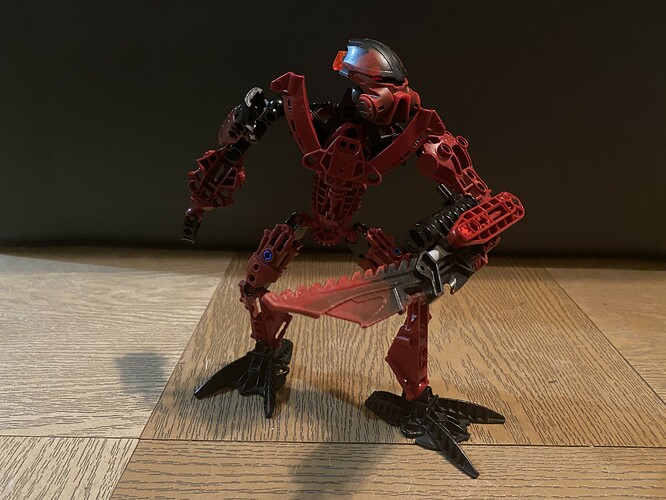 IMG_06344032×3024 1.98 MB
Syntero has held the title of Toa the longest of all the members of the Toa Lyta, having been transformed some three thousand years prior to the great cataclysm. Already a veteran by the time the Toa-Dark Hunter war broke out, Syntero would prove to be an invaluable field commander, leading the Toa in many successful battles with the Hunters. All of the chaos and fighting would leave in him a desire to return to a simpler life, and as such he would settle down in a small village in the Northern Continent, where he and his team would act as protectors of the arboreal forests in the continents north. 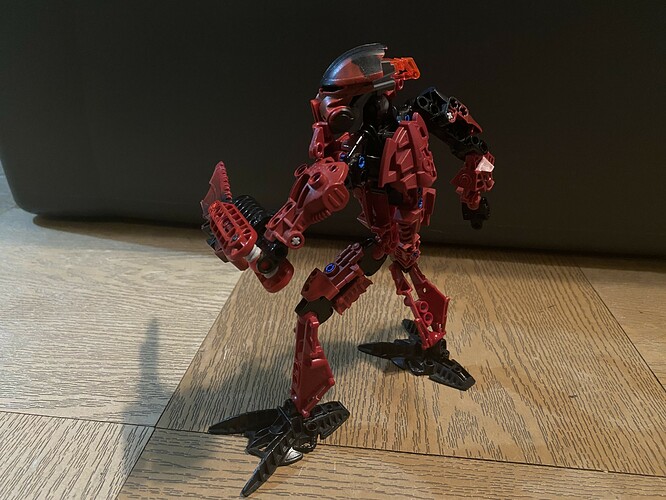 IMG_06354032×3024 2.12 MB
Strict to a fault, Syntero treats the position of Toa as less than the role of a Hero, and more as a job, showing a level of dedication to protecting the Matoran that borders on obsessive. With that said he does not hold the other Toa to this standard, recognizing they each possess their own methods of protecting the Matoran. Like all Toa of fire Syntero is able to create and control the element of fire, channeling his elemental energies in the powerful flare cannon he wears on his left arm. He also wears the kanohi Kiril, allowing him to repair damage done to most non-organic objects. 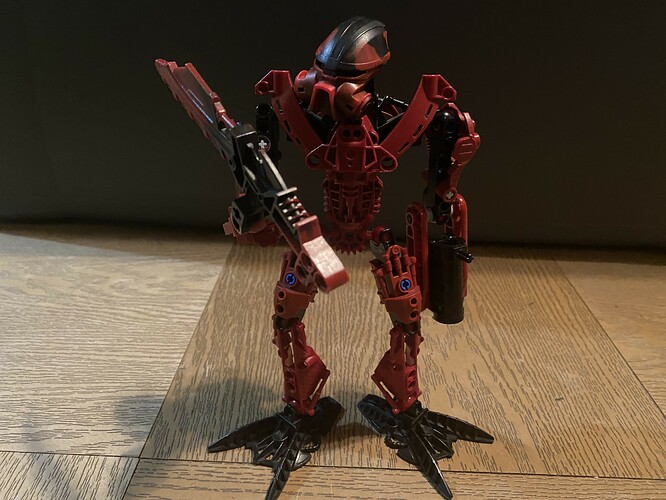 IMG_06364032×3024 1.93 MB
Syntero is arguably the oldest of this group of mocs, as he originally started life as a moc of Toa Dume created around 2013, but as time went on I swapped out parts of his body and eventually decided to make him a wholly original character. With that said I could never bring myself to change the mask, as any Kanohi other than a Kiril just feels wrong on him. 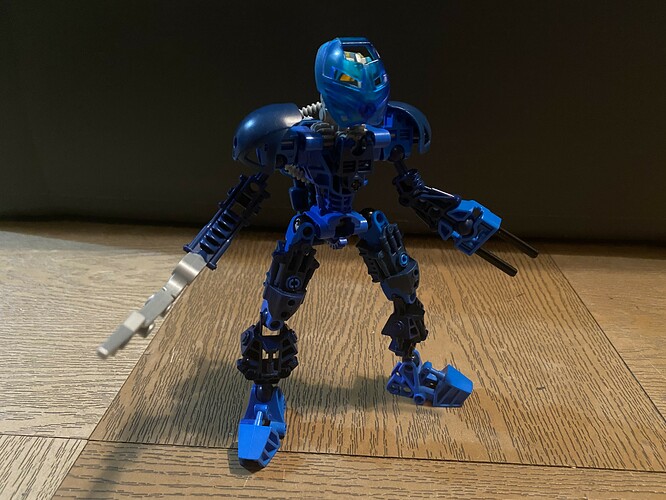 IMG_06374032×3024 2.13 MB
Sukela was a simple net weaver in her village when Toa Naho arrived looking for Toa to aid in the battle against the Dark Hunters. Recognizing the urgency of this, the village Turaga bestowed upon Sukela a Toa stone, transforming her into a Toa of Water. During her time in Metru-Nui, Sukela would meet Syntero, quickly striking up a friendship with the elder Toa. Following the war, Sukela chose to join Syntero in his journey to the Northern Continent. 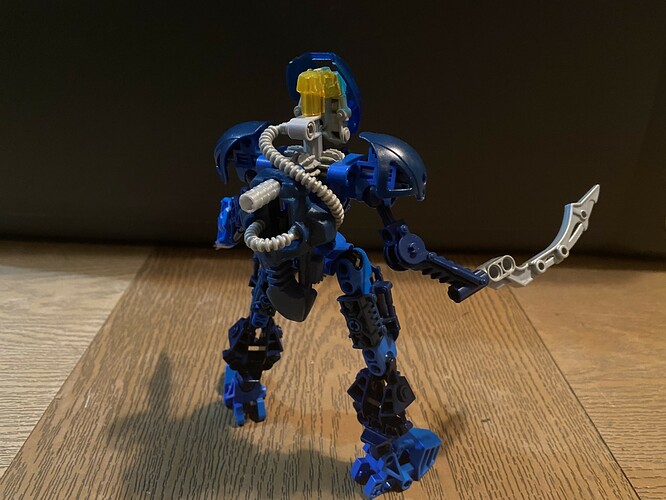 IMG_06384032×3024 1.87 MB
Excitable and always eager to do her part in defending the Matoran, Sukela is quick to jump into a battle, often at the detriment of her own safety. With one exception, Sukela is deathly afraid of insect Rahi, causing her to freeze up and leave herself open to injury.
Sukela possess complete control over the element of Water which she can channel through her Aqua Scimitar. She also makes use of a specialized breathing device allowing her to spend extedned periods of time below the waves. Sukela wears a Kanohi Ruru, allowing her to see in the dark. 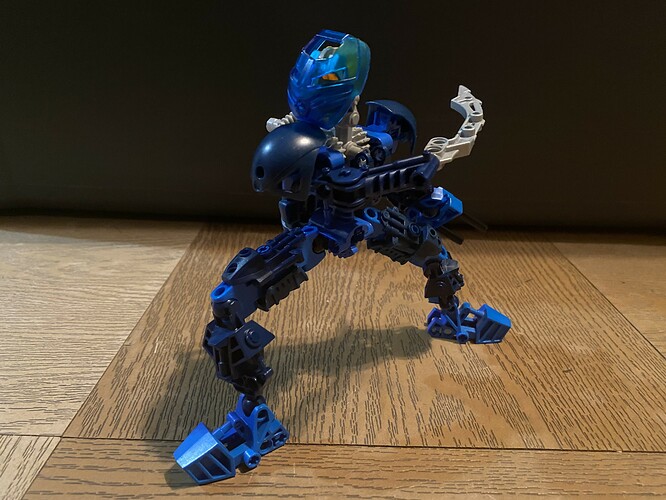 IMG_06394032×3024 2.05 MB
Sukela is visually inspired by the Toa from this video. I rememer being obsessed with trying to recreate the Toa in real life, and managed to come fairly close, with the obvious exception of the mask. 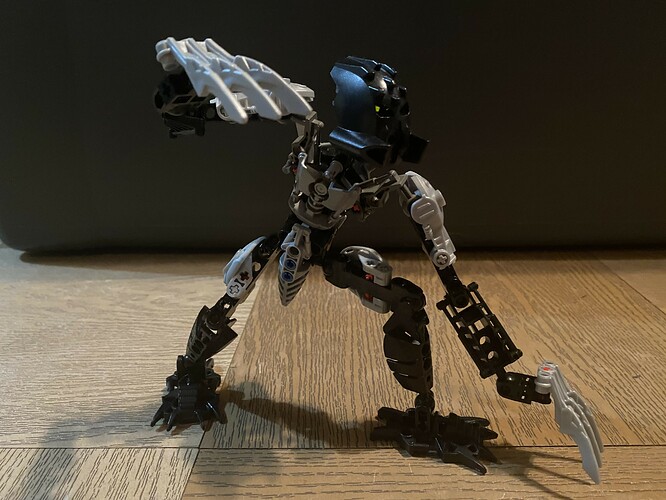 IMG_06404032×3024 1.98 MB
Jarsta is the most recent addition to the Toa Lyta, having become a Toa when he stumbled upon a pair of Earth Claws who’s previous owner had imbued some of his own Toa energy into. The sudden transformation leaving him confused and wandering throughout the forests of the Northern Continent for some time before he came upon the village which the Toa Lyta called home. Jarsta was quickly accepted into the village, becoming fast friends with the other Toa. Recently a call to aid from a village in the south would see them encounter the Visorak, though Jarsta is confident they can handle a bunch of overgrown spiders. 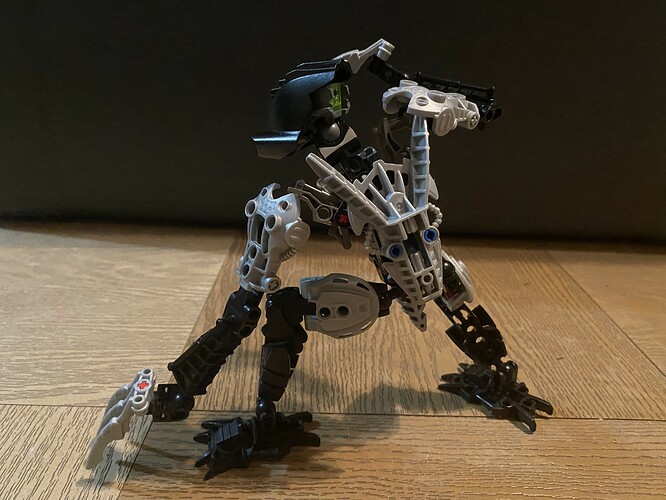 IMG_06414032×3024 2.35 MB
Quiet and reserved, Jarsta is somewhat uncertain about his roll as a Toa, and is especially uncertain about his position as a member of the Toa Lyta, due to the other members having a much longer history with one another and the village.
Jarsta is able to create, control, and absorb the element of Earth, channeling his abilities through the Earth Claws he wields. He wears a Kanohi Ruru, allowing Jarsta to see in the dark. 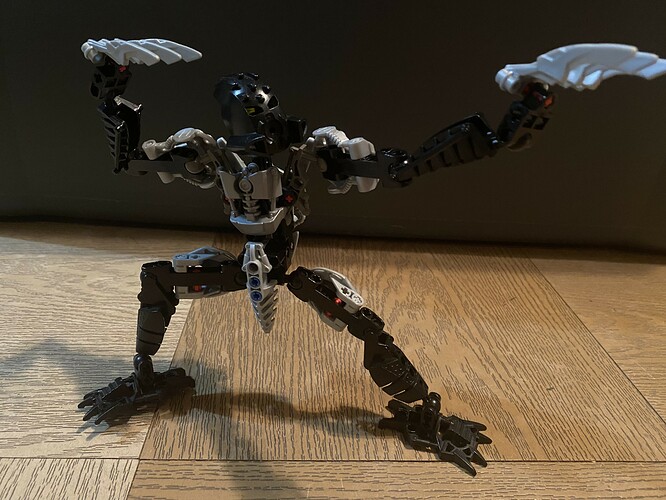 IMG_06424032×3024 2.13 MB
When it came to designing Jarsta, I knew I’d be giving him some kind of claw weapon in reference to Savages right hand, and of course a Kanohi Ruru would be mandatory. When it came to his overall design, I decided I wanted him to look somewhat like the opposite of Savage, mainly in the form of his skinny limbs and Torso, because after all, Savage is a Hordika, and they don’t typically resemble their original form to much. 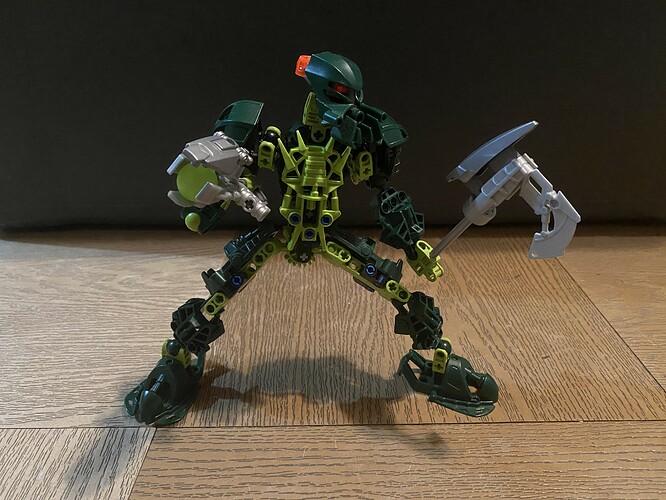 IMG_06434032×3024 2.51 MB
Pulehti was a native of Metru-Nui during the Toa-Dark Hunter War, and during the conflict, he would tend to the injuries of a Toa of Air, but the injuries would prove to be fatal however, and as his last act, the Toa would imbue some of his Toa energy into his axe and give it to Pulehti, transforming him into a Toa. Pulehti would quickly demonstrate his lack of experience in battle however, and would quickly lose his lower right arm, though Pulehti would make up for this by besting the Hunter and claiming his zamor launcher for himself. Fortunately for the young Toa, the war would come to an end some weeks later and, seeking a purpose, chose to join a Toa of Fire and a Toa of Water in their journey to the Northern Continent, where he quickly found himself at home in the forests. 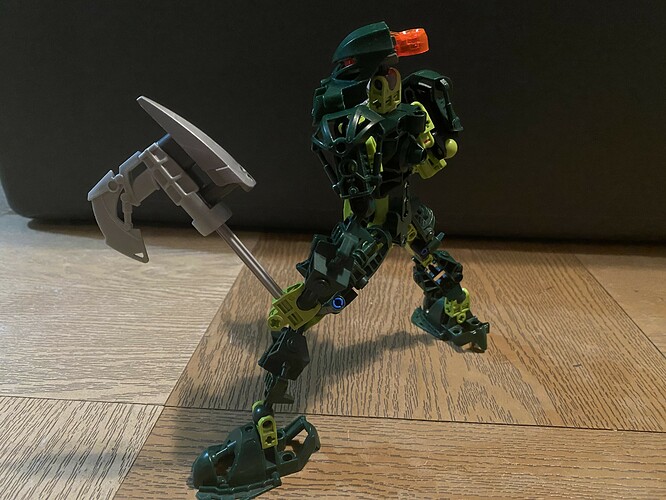 IMG_06444032×3024 2.42 MB
As a Matoran, Pulehti had long desired to leave behind the mechanization of Metru-Nui for the forests and wild lands of the lands to the south. As such when the opprotunity presented itself, Pulehti chose to part ways with his homeland.
Pulehti is able to create and control the wind around him through the use of his gust axe. He also carries a zamor launcher which was modified to rely on his elemental energies for ammunition. Pulehti wears a Kanoh Zatth, allowing him to summon rahi to his location, though he had no control over the beasts. 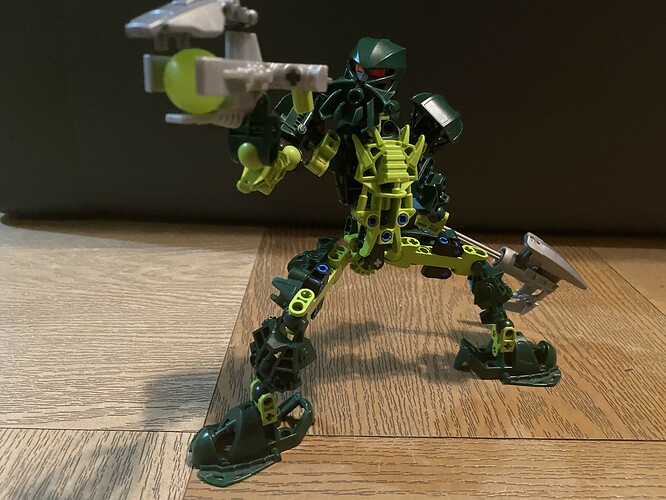 IMG_06454032×3024 2.17 MB
Pulethi was originally a Matoran I had created around late 2013, making him the second oldest character here. His asymmetrical arms was brought about almost exclusively because personally I’m rather fond of asymmetry in mocs. 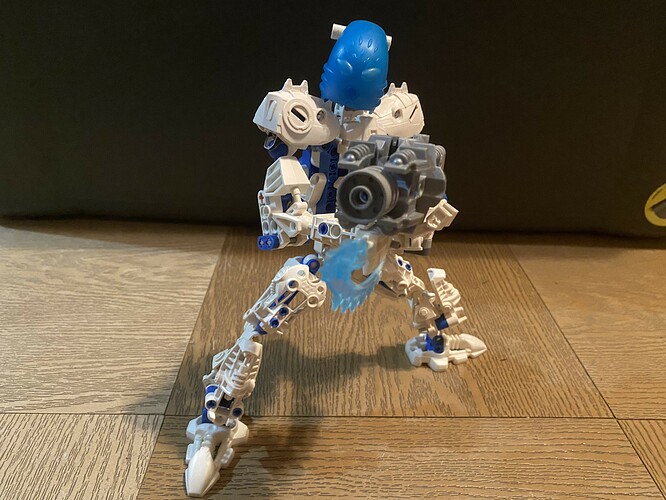 IMG_06464032×3024 2.38 MB
Kaopon was a male Vortixx who had spent most of his life working away in the factories of Xia, until an incident with his overseer resulted in the loss of his right eye and a chunk of his jaw. Deciding that enough was enough, Kaopon would stow away on a cargo ship bound for the Southern Continent. The ship would end up being attacked by Steltian pirates however, and in order to defend himself, Kaopon would take an experimental frost cannon. The ship’s engine would be damaged however, and soon Kaopon would find himself clinging to a shipping crate filled with Kanohi to survive. After drifting onto the shores of the Northern Continent, Kaopon would take the only mask which had not been washed out to sea and began wandering. During this time he would run into a trio of Toa heading for the forests in the north, joining them in their journey. 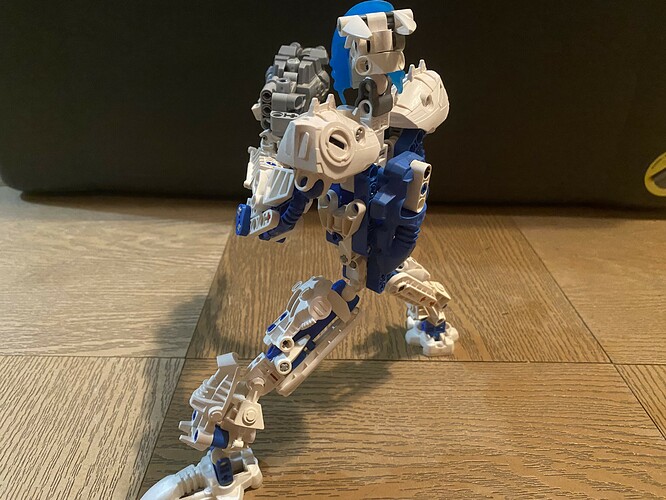 IMG_06474032×3024 2.41 MB
Kaopon is not the most intelligent individual, he doesn’t know much about most academic pursuits, but he does possess a keen sense for telling if someone is untrustworthy. Despite what he thinks, nobody believes his claims of being a natural Toa, but he has long since proven himself to be enough like one that nobody feels the need to call him out on it.
Kaopon possesses great strength and endurance as is common for male Vortixx. He wears a Kanohi Rau, allowing him to translate most languages without any difficulty. He wields a Frost Cannon powered by an Ice Sickle. 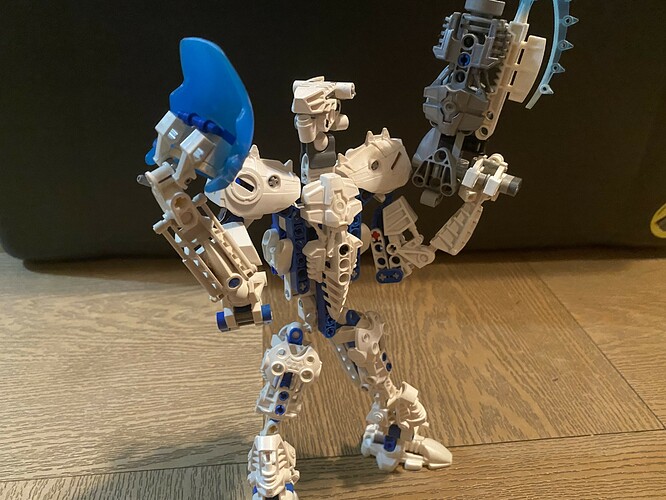 IMG_06484032×3024 2.36 MB
I’ve always like the idea of a Toa team not made up purely of Toa, with my earliest attempt producing a team which included a Steltian Bruiser, a member of Kalmah’s species, and a Glatorian. Kaopon is something of an evolution of that idea. That and also I just wanted to make a guy who uses Hordika helmets as shoulder armor. 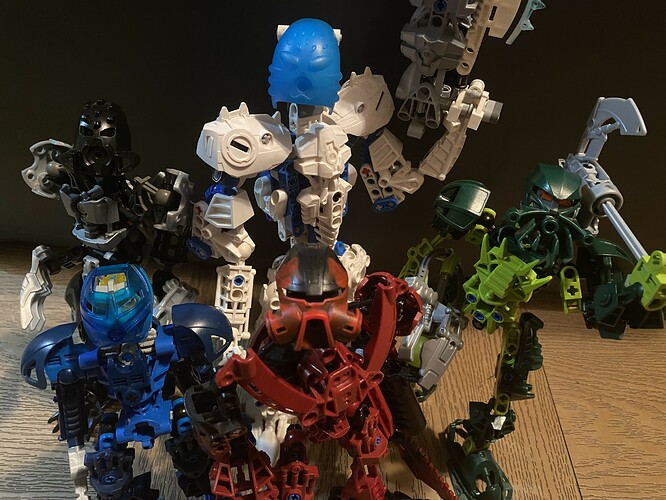 IMG_06504032×3024 2.05 MB
The entire idea for this team was to create a group which possessed one member of each body type, with the other two members possessing custom torso, to get across the idea this time came together more organically than most Toa teams we’ve seen.
19 Likes
Canon Toa Team Collab-Open to sign ups
Rukah October 12, 2021, 1:09am #2

Nice. I like how they all have different backgrounds but all came together. I also like that Kaopon is not a real Toa, and Syntero’s arm blade/cannon.

I especially like Syntero and Savage - or uh Jarsta I guess. He’s a really good translation of the DH build.

I’d love to know more about the early days of Kaopon, how a leftover of Xia’s industrial dystopia, forgotten by the system, found the strength and will to become a selfless hero.

These are great. I like them all having backstories and that there is one Vortixx among them.

in this picture I thought that Syntero only had one arm

these mocs are pretty nice!
kaopon is my favourite,
as i’m always a sucker for good ice characters.

I love these! The backstories are fantastic, and the Mocs are great too!

I just realised I haven’t commented on some of these.

Pretty cool.
I think its pretty fun to have all of them to have different types of torso and the Vortixx does work really good with the Team.