The Toa Of Light Talinuva 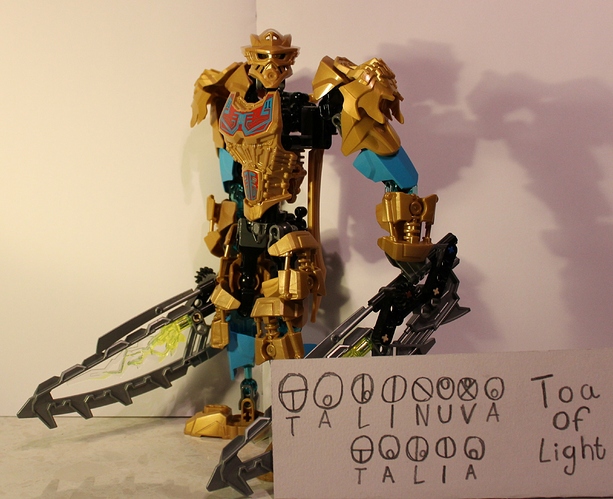 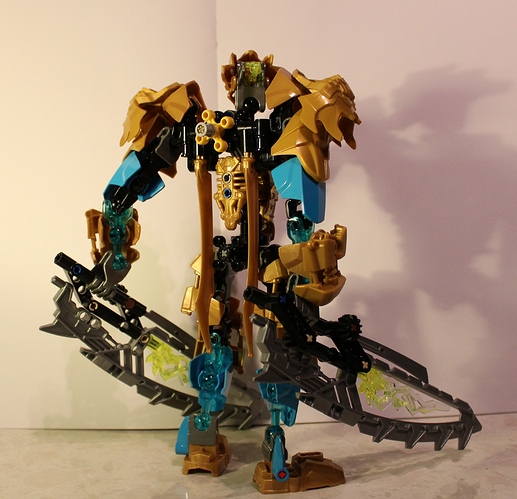 Here is my AU version of a classic Bionicle character with an added twist to them. This is of course the Toa of light, Takanuva! But in this universe our Toa is named Talinuva and she is not a he. Talinuva is the female counterpart of Takanuva in my Bionicle AU.

She is G2 built and inspired so she uses the CCBS system. She consists of parts from Gali 2015, Tahu 2015 & 2016 and Ekimu 2015. She uses Gali’s golden Mask to give of the feminine appears and keep some of the Takanuva vibe to her, and she uses Gali’s silver hands, eye stock, blue armor pieces and blue bone pieces. From both Tahu she uses their golden armor add ons and pieces, and Tahu 2016’s golden chest and body armor. She also uses 2016’s Tahu’s golden feet and golden shoulder armor add one. From Ekimu she uses some extra gold so she looks more gold then blue.

Talinuva uses both gear systems, so she got a waist swivel and she got the gear box in her arms, both from the two Tahu’s. She uses a mix of both Tahu’s weapons. She has his two small golden swords on her back and she has two giant swords with two smaller blades behind the two giant swords.

She is apart of my alternative Bionicle universe that combines ideas, scenarios, characters and aspects of Generation 1 and 2 in it. I am currently working on this universe so as time goes on i will try to add more and more of my own ideas, changes and characters in it. As of right now when I post this, which is January 2nd 2017, I will start to work on a story soon which I will upload on here when its eventually done. I will also be posting some more Mocs later on that belong to this universe. I will also be posting bios for them so people can understand who they are and such.

What do you guys think about my moc Talinuva here? I am willing to listen to criticism about her and the gender twist. (This is my first post here so I am still very new to this site and the rules)

Well the arms are pretty long compared to her legs, and she looks very wide, not to mention the torso it basically a modified Tahu torso.

The biggest issue I have with the MOC is the texture, it has too much going on and all the different ad-ons clash.

well maybe not that little

Keep in mind this is a bit awkward to give since there is no front shot of the MOC.

If you told me this was supposed to be G2 Takanuva plain and regular, I think I could buy it since it’s in Takua’s colors, and even has a mask reminiscent of Takua’s G1 backstory, involving his telepathic link to Gali.

Unfortunately though, this is not meant to be a regular Takanuva MOC. This is female and all critique must follow as such.

…put simply, it’s not. If I had no name to go off, and I had no MOC concept to read, there’s only one way I could read this, and that’s as a regular male Toa of Light, through and through.

You can probably get away with regular HF feet, but the shoulders need to be maybe half the width, the upper shoulder pads need to be removed or at least maybe far, far more compact, and the leg shaping - although not inherently bad - needs some improvement, particularly in the thigh area.

Additionally, and this is less important…get some translucent consistency. The blades want it to be trans-lime, but the legs and arms want it to be transblue, and it creates a major conflict. This is only exaggerated by the fact that we only have two pictures to work with, both of which the MOC is holding weapons.

Overall, needs improvement in the proportions department. A lot. I have no problems with this being a simple, set-style MOC, but it needs a lot of touch up work to make it appear like what you have placed before us as backstory.

This is the best feedback i’ve gotten. Thanks for taking your time to tell me how to improve on this specific design of my Female Takanuva. I am currently working on a slimmer and more feminine design for her. I will post her ‘‘G2 Nuva’’ form possibly later today. The lime in her swords was suppose to be somewhat of a light power or something. I will come up with a name, what it is and how she uses it when i start with my story. Again, thanks for the constructive criticsm. I wasn’t expecting to get such a great feedback.

I think you should make the colors white and gold instead of light Azure, Red, and gold. Those really don’t make me think of a toa of light. Also what Ek said.

Well i wished i could give her white colors but i sadly don’t own any white G2 pieces and the red on her upper chest is only there because i don’t have any pure gold chest armor.

I would use a different torso shell since the red stands out to me, but the colours are an interesting choice for a light based character.