Legends from the north tell of a demon, a vile force borne on the cold starving winds of winter. It hunts souls, afflicted with starvation, to tempt them to do the ultimate taboo a human could commit: To eat human flesh.
Once finding a weak victim, the demon will take full control of its host, goading them on to hunt and kill friends and family, to feast on the flesh of others suffering the drought of winter.
Slowly, but surely the wendigo takes control. No more is the human it possessed is human, but a monster, driven by only one instinct: to eat, to kill. Nothing more.

In warmer seasons, the Wendigo hunts different prey. Men whose hearts that are given easily to a different kind of hunger: greed. The greedy heart is a warm banquet to the Wendigo spirit, basking in it longer than it does in the victims it takes in the winter seasons.
The desire to consume flesh is still there, though the horrific transformation does not take place, at least, not until winter sets in… 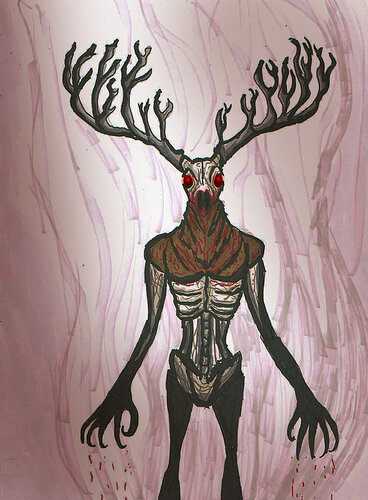 For some reason, I felt compelled to draw my own take on the Wendigo, the cannibalistic spirit monster from Native American folklore.
I went with the deer skull look as opposed to the Until Dawn styled fanged faced zombie, as I consider the deer skull look more frightening and more than the latter.

Oooooh, looks pretty good! The Wendigo is one of my favourite cryptids

The wendigo was always one of my favorites. Good job! The shaping and coloring adds a lot of pop to this.

As I was drawing this, I couldn’t help but make mental connections to Umarak the Hunter…though it may be just the deer horns and the idea it is a predator. lol