Check out my profile for more chapters! 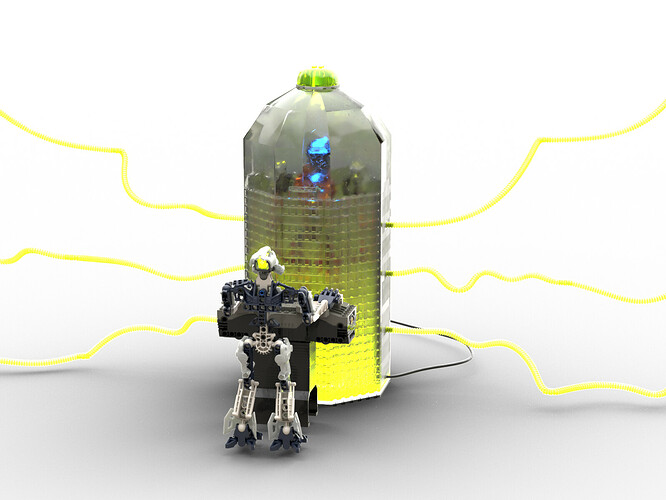 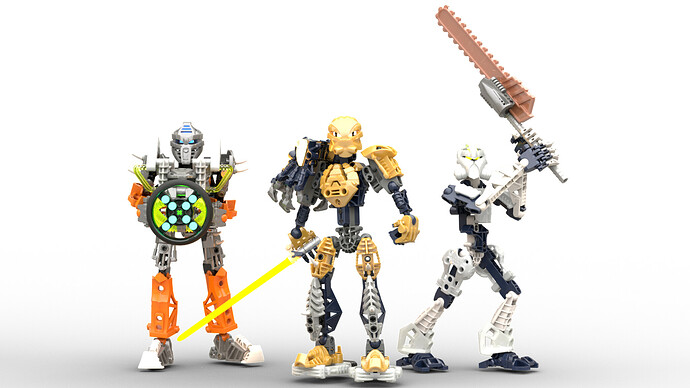 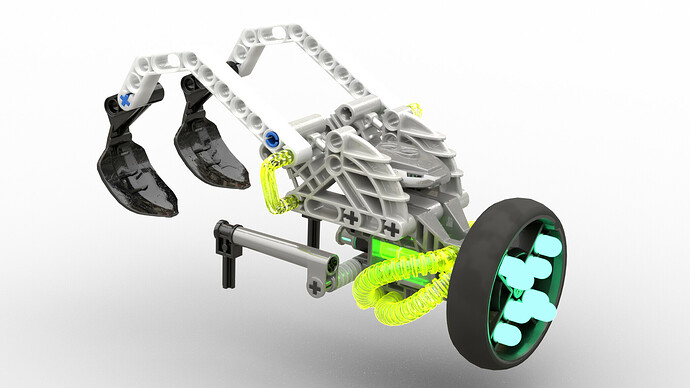 “What do you mean you were born here?” Chiara asked. “Up until a few days ago, this place was on Bota Magna. How could you have been there?”

“My life didn’t begin within the Great Spirit.” Orde replied. “It began here. This was where we all met, before they sent us to look after the Matoran.”

“Where who met?” Zaria said. “No more mysteries, Orde. We need answers.”

Orde shrugged. “I thought it was fairly obvious. This is where the first Toa met. The original fourteen. This was the place we all came from.”

“You were one of the first Toa?” Chiara said in shock.

“I said there were no more male Toa of Psionics after me. I thought that spoke for itself. I was the first.”

“I suppose I never put it together.” Zaria admitted. “It makes sense. But that means you’re one of the only living beings from our world that’s seen a Great Being in person. Why didn’t you mention that sooner?”

Orde looked around the room, his eyes lingering on small details, as if he was seeing people who no longer stood there. “I barely remember them now. It’s like a distant dream. I’ve only set foot in this place twice before. The first was the day I first awoke, when I met the other Toa and we received our missions. The second was on the day they told us we’d eventually need to sacrifice our powers and become Turaga. That was tens of thousands of years ago. And after that, I never saw the Great Beings again.”

“If this was the Great Beings workshop.” Gelu said." Could there be anything here that could help fight off Marendar?"

“What’s a Marendar?” Chiara asked. Briefly, Gelu explained how the creature had identified itself as Marendar and that it seemed to only consider Toa a threat, an assessment that matched up with the information Orde had gotten from controlling it with his Iden.

“This was the place where the first Toa received all their Toa tools, so there’s probably something here we can use.” Orde said. Suddenly, there was a loud boom from outside. The four warriors shared a look. “But be quick about it. We’re running low on time.”

Outside, Marendar’s heat vision was quickly proving ineffectual at melting the entrance to the structure. It cut off the beams, and within a minute the wall had cooled and returned to normal, completely unfazed. With blinding speed, Marendar swiped one of its claws across the wall. Sparks ignited as metal ground against metal, but there was nary a scratch on the structure.

Any other being might have become frustrated or irritated or at the very least mildly annoyed at this setback, but Marendar felt nothing. Instead, it simply dug its feet into the ground, reared back its arm, and began to strike the wall with enough force to flatten a mountain, again and again. Slowly, the metal began to buckle and dent until, with a final swing, it punched a hole in the wall large enough that it could step through.

Silently, it climbed into the hole and into pitch darkness. " ADAPTING ." Its Kanohi mask glowed for a moment, and then its eyes turned green as it adapted to see in the dark. Before it was yet another wall that had formed behind the first, blocking its entry once again. Marendar said nothing; it simply began hitting the wall with all its might, over and over. It would break through as many walls as it needed to to reach the Toa. It would find them. It was only a matter of time.

As the group surveyed the area, Chiara began poking at the large, cylindrical machine on the far wall. The control panel lit up, displaying various categories such as “Arms”, “Torso”, and “Kanohi”. She called Orde over. “This is the machine I first awoke in.” he explained. “If I had to take a wild guess, it’s probably some kind of chamber that makes Toa. Not really sure how it works, though. I’ve never actually seen it in use.”

“Could we use it to make another Toa to fight alongside us?” she asked excitedly.

“In theory.” he replied. “But like I said, I’ve never seen it in use. But if you want to test it out, go ahead. Another set of hands to try and take Marendar down couldn’t hurt.”

Chiara went to work, tapping at the console as quickly as she could until she’d finished her masterwork. When she hit “Assemble”, the machine sprung to life, with tiny arms quickly weaving together new armor and tissue seemingly from thin air.

Zaria opened a chest and tossed something to Chiara. “Catch!” he called. It was a Kanohi Kiril, Mask of Regeneration, though one with a design neither of them had ever seen. Chiara donned the mask and quickly set to work repairing the damage to Orde’s back.

Gelu opened a cabinet and found it was filled with strange devices and weapons he didn’t recognize. “Here.” he said. “Come grab something.” Without hesitation, he took a double-bladed weapon for himself and stepped out of the way so the others could look for themselves.

Most of the tools were foreign-looking to the Toa. Orde grabbed what appeared to be a small silver tube about the width of his hand with a single button on it. “I’m not sure these are actual Toa tools.” he said. “Most Toa tools are designed to channel our elemental energies.” When he pressed the button, a beam of amber light shot forth, creating a blade made of pure energy. With an errant swing, he cleaved a worktable in half, the edges charred as if burned clean through. He smiled. “But this should work just fine.”

Chiara wasted no time selecting a large device with a long handle and many tiny blades connected to a chain that looped around a long ellipsis. When she activated it, the chain began spinning with a loud grinding sound. “If these don’t put that monster down.” she said with a smirk. “I don’t know what will.”

Across the room, Zaria had picked up what appeared to be a large box with a handle on it and was shaking it, intrigued. “I wonder what this thing does.” he muttered. Suddenly, his thumb managed to flip a small switch on the handle, and in an instant the box had unfolded into a massive cannon-like device strapped to his chest. It began to whirr and pulse with green energy. On the bottom he found two handles with triggers attached to them. Without thinking he pressed one of the buttons, and with a loud boom a beam of emerald light shot forth, turning a cabinet into a melted pile of slag.

Quickly, Gelu rushed over and pushed the barrel of the cannon towards the ground. “Maybe keep that pointed away from us for now, huh?” Zaria nodded nervously and flipped the switch again, converting the cannon back into a box.

BOOM. Another thunderous explosion echoed throughout the workshop. Gelu whirled to scold Zaria, but found the box was still inert. “It wasn’t me this time!” Zaria cried.

BOOM. All eyes turned to the wall, which was beginning to buckle as Marendar beat on it with all its might. The four looked at each other with apprehension, but without a word they assembled, readying their weapons and facing the door.

BOOM. Orde gave a quick glance to Zaria. “Don’t fire that cannon unless you know it’s going to hit.” he commanded. “It is faster and stronger than any of us. We need to make this count.” Zaria nodded in understanding, and aimed his cannon at the wall.

BOOM. Behind them, the Forge, the Great Being’s greatest invention, had finished printing the tissue and armor that Chiara had designed. As a soft green light enveloped the interior of the machine, it began uploading data to the new being’s mind, data that had been compiled by the machine’s creators millennia ago. Not only language and information, but also directives, core instructions determined to be the being’s driving mission.

BOOM. “You are a Toa.” the directives stated, a calm, soothing voice in the being’s mind. “One of many. Alone, you are strong. But together, you have Unity, and that is something stronger than any foe.”

BOOM. “The Matoran need your protection. For you are strong, and they are frail. They need guidance and security in order to serve the will of the Great Spirit. That is your Duty.”

BOOM. “And,” said another voice, softer and deeper than the first, “you must look beyond. Seek greater heights. Pursue that which you desire.”

BOOM. “There are those that would tell you that you are but a soldier. A guardian. A tool. But you are so much more. You are alive. You can think and feel for yourself, and so you must know when it is time to move past that which you have been told and make your own future. Choose your own path.”

BOOM. The wall to the workshop caved in as Marendar stepped through, its glowing red eyes already transfixed on the Toa before it. Orde, Chiara, and Gelu raised their blades and Zaria took aim with his cannon, his fingers twitching with anticipation. Together, the four warriors stood united against an insurmountable foe.

“That,” said the voice in the new Toa’s head, “is your Destiny.”

Hey, um, I’ve noticed you’d uploaded a solid 5 topics in a row. It’s advised that you consolidate them into one, posting the additional chapters in posts below the original. People are a lot more likely to read them all that way.