After watching the latest podcasts I wanted to see how it would look if we took lego’s colour palette to differentiate the tiers of matoran, to see if long legs could really work. Personally, I think with the finalized versions of the toa it would be really difficult. To make clear differentiations between the matoran on a small brick scale, you’d need to really simplify the colour palettes. Right now each toa has too many colours, which is why it’s becoming hard to tell the difference between earth and air matoran, etc. I made a rough mock up of a colour palette that I think would work.

On such a small scale, colours need to be really simple, with colours being exclusive to each region, and colour patterns being used to differentiate between tiers. For example, if you have a fire soldier and an ice soldier, their colours should be different enough to tell you they’re from two different regions, but their colours should be placed similarly enough to tell you they’re both soldiers.

In the pictures below you’ll see that each region has a colour that represents each element. This is each of the toa’s primary colour, and the one that stands out the most. This is the region’s visual representation of power, and can even relate back to their religion. Red is important to mangaians because it represents ikir, god of fire. It shows how powerful Tahu is because he’s coloured red all over, foreshadows narmoto being the ‘chosen one’ because his primary colour is red, and soldiers wear highlights of red as like a form of patriotism, almost painting them selfs in red as they go into battle in the civil war.

Each region also has a secondary colour, in Mangai’s case, orange. It’s the secondary colour of the toa, and gets carried on to be the primary colour of the ordinary matoran in each region. For more important characters like Narmoto and Jaller, they still have highlights of orange to show relation to them being matoran still, but adds enough colour to show they’re more important to the story, without going overboard.

The last colour is dark gray, it’s the secondary colour of the matoran and the primary colour of the soldiers. Basically represents the ‘foundation’ of all brickonicle, like their skin, and also represents armour for the soldiers. Acts to contrast the bright colours of the important characters while demonstrating the unimportance of background characters, letting them blend in more.

I also made concepts for other important matoran, giving them distinct colours, but colours that also make sense with their region’s colour palette so they don’t stand out too much.

Still rough designs, and could definitely be tweaked, but I think it’s a step in the right direction in making all of the matoran visually distinctive from each other! Let me know what you think! 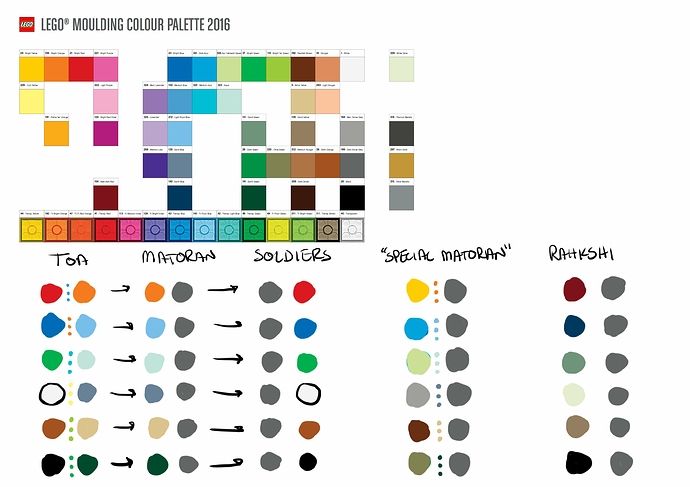 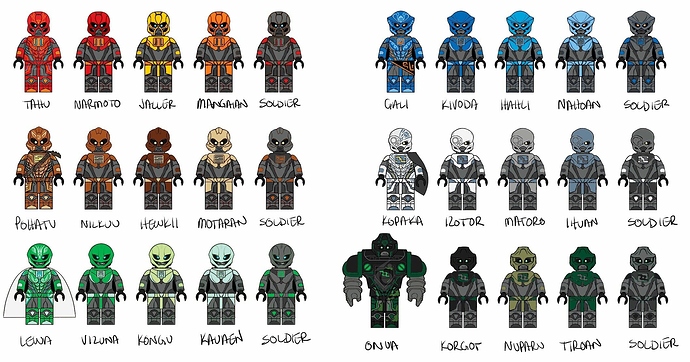 As much as I’m getting tired of color discussions, these look really good. I like the grey shades for ice instead of the blue.

The only issue I see is Vizuna and Nuparu. I can tell they are a slightly different shade, but it still may be too similar to work.

These look really good, but… I am still on the short side, and at first glance, there does seem to be “the Chima effect”. I am very impressed by how you avoided the similar colors between elements, however. Also, you showed Rahkshi colors. Are you planning on drawing them with those colors?

I feel like their’s kind of a Chima affect with everything between soldier and Toa looks the same. Maybe make civilians and soldiers look the same, or give civilians colored masks but identical armor if you’re determined on a difference.

Well the 3 between toa and soldiers are all technically the same class, they’re just different colours to show they’re different characters.

@Stuubh haven’t made any designs for the rahkshi, no. I just included a palette for them to show that lego does have options for them that are different from every other colour I picked. I think they’d be good picks for them cause they’re a bit more dull, and kind of visually gives the impression that they’ve been tainted or turned to the ‘dark side’ since they were matoran that now follow Makuta.

@Innodence I did think about that, cause I wanted matoro to have his classic colour, but for the sake of consistency I decided against it. The main colour of each regular matoran is the secondary colour of each toa, as shown in the palette pic. In the ice region’s case, since kopaka’s secondary colour is sand blue, the regular matoran’s main colour had to be sand blue to keep with the pattern.

I still don’t understand: the brickonicle figures are made with a program? All of them looks so similar!

No, I just took ttv’s toa designs and swapped around colours. In a final version I definitely think they’d need to redesign some of the body prints to make them more unique, and even change some of the matorans masks. This was just a quick mock up to show how the colour palettes could work, I’m no designer.

I would like to see you try with different masks and bodies.

I will try too!

So is there a reason they all have the same exact masks?

Also it looks kinda like all the Water and Air matoran are female, and all the others in every other tribe look male… Is that just you trying to show them all as similar, or did you forget that the tribes are no longer only one gender each.

They mentioned that earlier. This was only made to show off the colors. The masks/designs are just carbon copies because it was simpler to do, instead of making all unique ones. The colors are the main focus of the drawing.

I don’t like long legs.this is not geared at you @Rynosaur24 .whats your opinion?

I think I’d prefer short legs as well, but I’d also like a tiering system like they’ve been discussing with a similar colour palette like the one I suggested. I don’t think it has to be one or the other, why not both?

It can definitely be both. All were saying is that the toa-matoran problem doesn’t have to only be shown in colors and patterns, as it may still be confusing to new audiences.

see the problem i have is that lego is mostly geared for kids and kids find color fun.if most of the character are in grey scale kids will find them boring that’s the problem from the start of the idea.

Very nice, but I’m still a bit worried the Toa will blend in with the rest of them, especially Kopaka and Pohatu. I don’t think it’s as bad with Onua, but he does seem very similar colour-wise. Really, I do like these designs, and I would like to see them implemented.