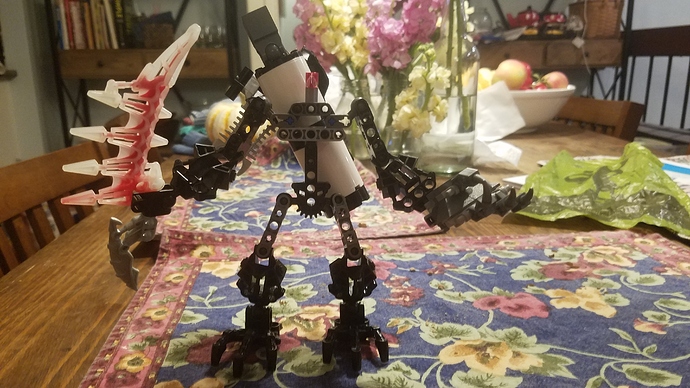 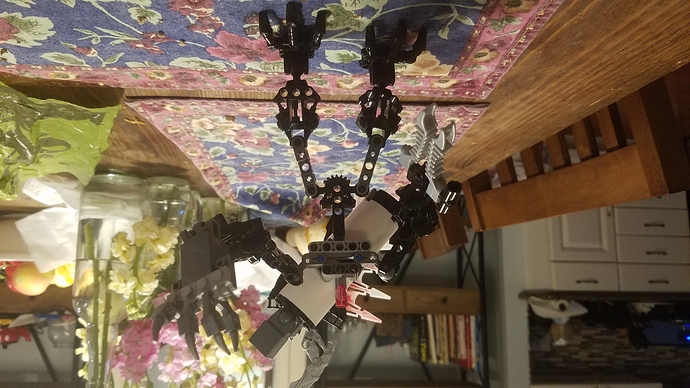 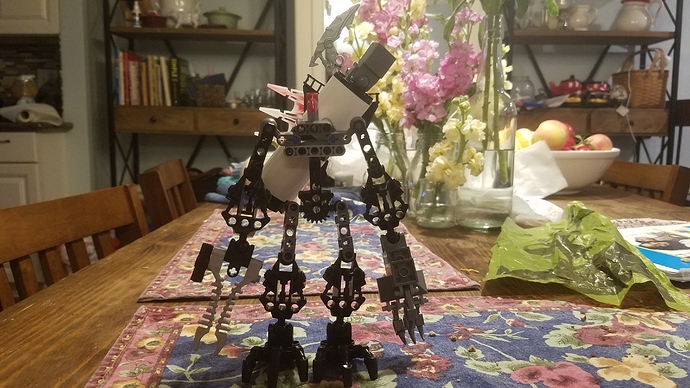 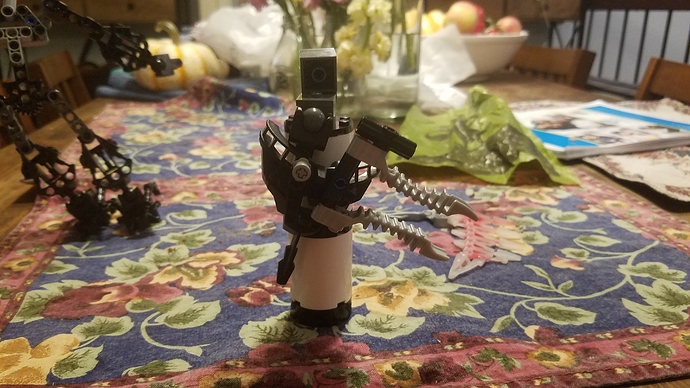 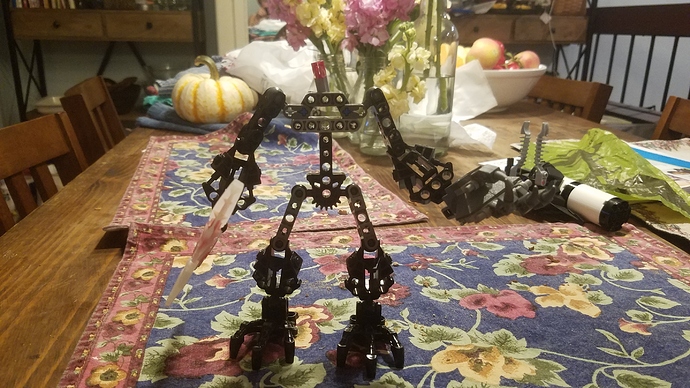 Is that… it?
I know anyone can have a limited supply of pieces but this seems like the barest of bones.

That’s a nice cannon you got there, and a really nice hand too!

He’s very lacking in armor, though, maybe try and flesh him out! And maybe give him a proper head, too!

Keep it up! Good luck!

So this is a moc i made awhile ago but just recently posted it. (sorry for upside down photos dont know why that happened). So back story, this is a robot designed by a matoran who hated the toa like ahkmou. but when almost done he turned on the machine to see if it worked, it quickly went insane and killed his creator. he then broke free of the lab and ran off. later he found a blacksmith making a energy caster, he promptly destoryed the smith so he couldnt be sent back, he also took the powerr source hence huge tank on back. it then proceeded on a huge rampage when it encountered the toa. the fought and the toa destroyed the bot. the bot has a single eye that sees in a 360 view wields a large sword, his large hand has the power to destroy buidlings with a punch and uses it to jump rather than using his legs.

@Hautaka thats the point, thanks for the points though this was a robot that was almost finished but when it was tested it killed its creator (the torso was just an experiment to make a “custom upper torso” with technic parts though. and yes my bionicle parts are very limited but i do have a large bin of technic, working on getting more parts.

@PakariNation99 thank you as always. but he was meant to look that way planning on a revamp with more armor and a better though similar head when my next parts haul comes

he promptly destoryed the smith so he couldnt be sent back, he also took the powerr source hence huge tank on back. it then proceeded on a huge rampage when it encountered the toa. the fought and the toa destroyed the bot.

First off, some grammar and spelling are off, second, this moc doesn’t seem that powerful.

I know there a saying; “Don’t judge a person by it’s cover.” But I don’t see this thing capable carrying a blade and a giant battery.

Despite being a robot, the proportion is very odd and the feet break the flow even further.

Yes thank you i love critique. and i will take these points when i revamp this in the coming weeks. but its similar too the function of an exo-skeleton though ,not intended to be worn, small as possible while being strong as possible. and unfortunately one of my moc’s went missing with the original feet for this moc so i improvised as i have a very limited parts collection as of now.

If you want a thin look I’d start by using Metru legs instead of the limb pieces used here.

Good work on the color scheme though. Ive seen a lot of terrible color schemes so I’ve learned to appreciate this sort of thing.

I know he’s supposed to look unfinished, but he can still have that look whilst still being a better moc. I think the torso needs some nuva armour or something and the shoulders and thighs need something too.

on a side note, I’m reminded to be appreciative of how constructive these boards are by stupid, trying-too-hard-to-be-funny comments such as the one just above mine.