I see no reason to not have a MOC contest then an art portion.

Also, in my opinion, a MOC should be free to use whatever torso and limb builds the builder wants – if it strays too far from looking like a Toa Metru in design, voters can reject it. But I think having the option for custom builds emulating the Metru torso or variations, for example, is important.

I totally understand why you all behind the scenes wouldn’t want to allow something out there like this in.

If I was allowed a say though, I’d argue that Hoseryx was an outlier. Aside from Hoseryx, pretty much all of questionable Helryx mocs were ousted almost immediately. The one with the nuva boobs, the one with the tiny Gali master head (I’m definitely forgeting some, but still).

Same with Artahka. We even had some similarly out there Artahka mocs in his contest, like that one that was a skeletal black demon looking dude with Edward Scissor Hand’s … scissor hands.

That MoC didn’t make it to the finals. People could’ve rallied behind it, but they didn’t. It was just an unusual take on the character that had a very small shot at being canonized.

However, I totally understand not wanting to include that MoC you posted earlier. I understand wanting to head off a potential Hoseryx tier disaster before it starts, it had to have been a huge stress to deal with that.

In the end, we’ll all accept whatever you guys decide are worthwhile candidates, whatever definition that is. You host the contest and therefore have a lot of say in who is allowed in. I just don’t think that kind of a moc would be a massive problem, though I have been wrong before, and it’s not really my place to make the decision anyways. I’ll respect whatever you guys choose, man.

Yeah I’m looking back at more of these entries in past contests. They have 3/4 angle photos of their Mocs and saying that’s the front picture. Same with the back and even the side with some of them. While that’s fine, i do want a straightforward 90 degree front picture, side picture, and back picture. So just a minor refinement with that rule would be nice

So long as a MoC isn’t an obvious joke, I don’t think it’d be a Hoseryx tier problem, though I could be wrong. Remember this Artahka MoC?

@Sabretooth Someone tried to create a similar system in the old discussion topic. I didn’t go so well.

@Dag If the Mocs will be getting canonized, then any entry that uses a regular mask of emulation will almost certainly get disqualified.

If there is artwork based off the Mocs, then I’d vote for whichever moc as the best limbs, armor, etc…, because the mask would be changed in the artwork portion anyway.

It’s no wonder why people would point out that an entry into a canon contest blatantly goes against canon, even if the entrant wasn’t aware of it.

in this particular case, you are advocating for a MOC that utilizes a popular headcanon to overwrite previous canon, which is why I find your statement so hypocritical.

The issue of Pouks wearing a mask that’s not shaped like a standard Mask of Emulation isn’t as clear-cut as you’re making it seem. This post does a great job explaining why:

Regarding the Hagah Masks Ask Greg

Hi, Greg, hope you’ve been well over the past year. One interesting byproduct of the TTV canon contests has been the unearthing of various quotes and ideas regarding the appearances of characters without sets. The Toa Hagah have been a source of much discussion, to say the least. I quite appreciate the insight you’ve given about their appearances, but there is one quote in particular that has caused some confusion. Quick Recap on the Hagah Masks I’m sure you may remember the details on the lore of the Toa Hagah, but here’s a quick recap. The Toa Hagah sets were designed and then eventually declared to be the original forms of the Rahaga Norik and Iruini. However, Norik didn’t have an original mask piece, using instead the one worn by Turaga Dume. Since it didn’t make sense for Norik to …

if it strays too far from looking like a Toa Metru in design, voters can reject it.

The thing is, a lot of voters just come here to vote. They aren’t involved in these discussions, and don’t know about the minutiae. If you allow a canon-contradicting MOC into the voting, a lot of the voters don’t know or care enough to not vote for it just because it doesn’t comply with a Greg Quote.

Overall, I agree with the sentiment of “let the voters decide”, but that won’t always fix canonictiy issues.

(Also, three-armed Artakha was unironically awesome. One of my top two, along with the winning one.)

Actually, ditto. It’d be useful to see those angles. It’d at least help prevent a Hordika situation where they look hollow from the side.

Edit: scrolled down a few posts and apparently it is in the rules. Neat.

What was the greg quote again?

Saying an entry MUST HAVE these specific pieces is a rule that does nothing. I guarantee someone can use those pieces you mentioned and still make something like Nenon.

It doesn’t matter what pieces you restrict and say must be in a moc because you can just build around it and cover it all up to the point where you don’t even see the original piece anymore.

The issue of Pouks wearing a mask that’s not shaped like a standard Mask of Emulation isn’t as clear-cut as you’re making it seem.

Nothing Greg says can overwrite the books, specifically that the Hagah do have masks shaped after those of past heroes. That alone does open the possibility more Iruini situations, but still unlikely. Then we have Greg’s previous answers:

2)Do the rest of the Hagah have a mask of a different shape, like Norik
2a.Is it possible?
2) Yes

1)I asked you if the rest of the Hagah had masks shaped differently than they should be (Norik : Pehkui=/=Kiril, but it was carved that way) and in a #b, i asked you if it was at least possible, and you said yes, did you mean yes, it is possible or yes, they do?
1)Yes, they do

It can’t be anymore clear-cut than this. I’m pretty disappointed that Gonel made that post, considering Greg has been understandably frustrated in the past when being asked the same question twice. If there was actual conflict between sources, I understand that, but that’s not the case here.

… or just do both

Just say it has to have the metru torso and reasonably resemble the other hagah.

There’s two that have been important in these discussions.

One says that all of the Hagah have a Metru Build:

The other says their masks are not in the correct shape of their powers:

Is there a difference?)

It doesn’t matter what pieces you restrict and say must be in a moc because you can just build around it and cover it all up to the point where you don’t even see the original piece anymore.

Read it again I specifically implemented build restrictions as well in that definition. What axels or pins you use to connect everything together or what you add on to those axels or pins shouldn’t matter as long as the main construction with the gear function and waist is intact

And then we’re back to square one of what the hell is considered acceptable and how much leeway do we have to customize the build. Not everyone has the same idea of what resembles a toa hagah. If we did, we wouldn’t have this many people arguing about the rules

We would have that problem with your solution of just mandating proportionality. Restricting to a metru torso actually helps fix that.

we wouldn’t have this many people arguing about the rules

unless people are arguing for the sake of arguing

And like I said, people can use those pieces and build around it and can make that moc look like the furthest thing away from a metru moc.

Proportions are the reason why you think a metru moc looks like a metru build and why Nenon doesn’t look like your usual metru moc. She has actual human proportions.

If she was built with the same proportions as a normal metru build, I have a feeling people would be more ready to accept her as an entry.

So no, piece restriction doesn’t do anything other than make the people who want custom builds not want to join the contest @Winger

And like I said, people can use those pieces and build around it and can make that moc look like the furthest thing away from a metru moc.

And how does letting people use whatever pieces they want help that? People can do that even more easily then.

Yo, I just finished reading (as of me starting this reply) all 169 comments currently in the topic. I gtg for the night but I’m just going to post some final thoughts for the day. 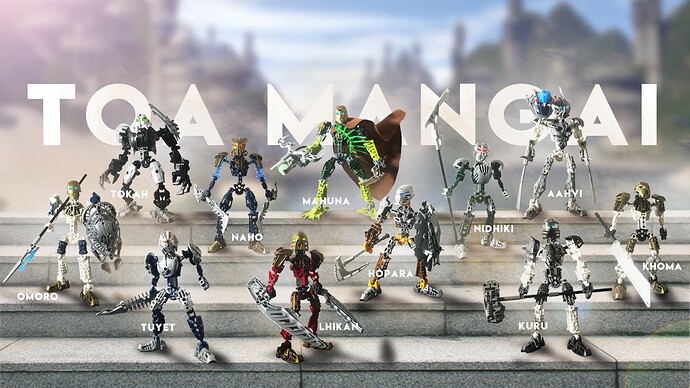 Proportions wouldn’t be an issue if you ban custom torsos as then you are given a frame you must adhere to. Also there is always a guy who is going to try and bend the rules but kf they do they’ll most likely get voted out anyway becuse they stray to far from the common consensus.