My Toa hagah Wips. Sorry for bad quality I will do better pictures for the contest 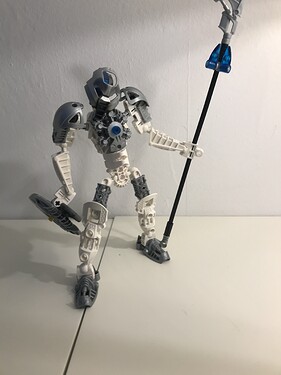 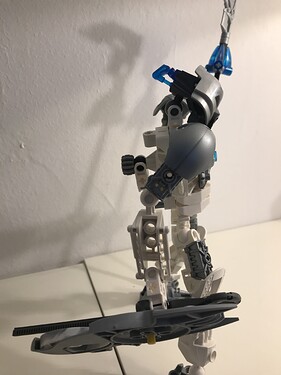 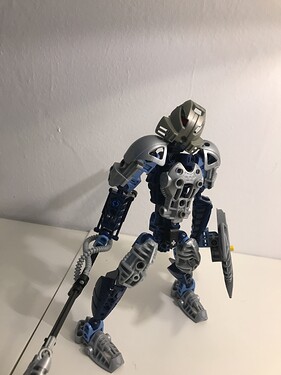 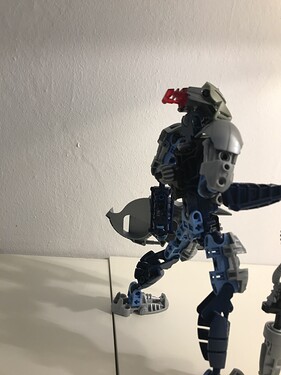 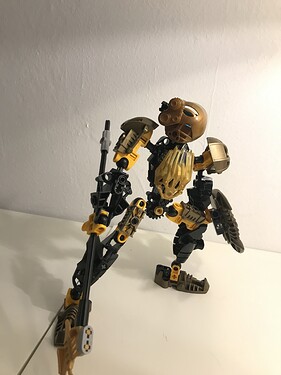 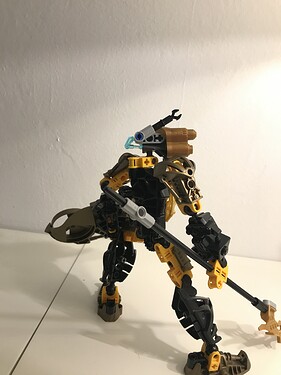 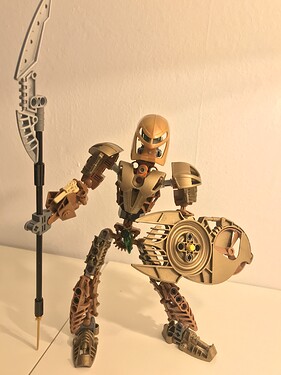 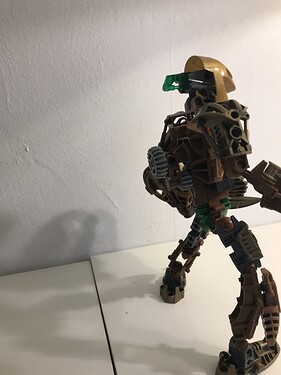 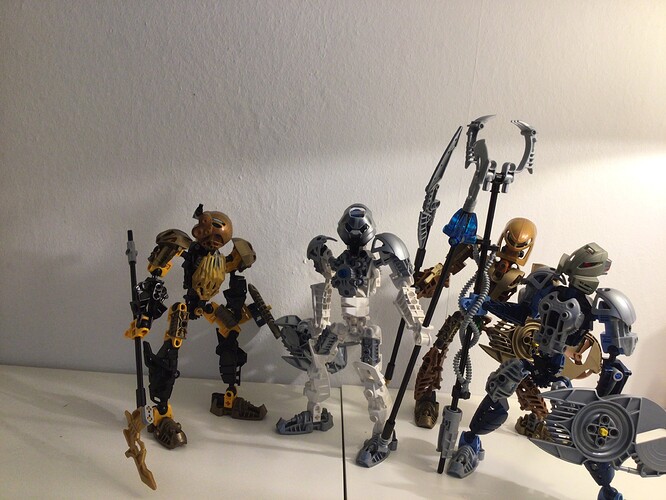 Kualus: I wanted him to be silver cause of the Toa of Light stuff. But I think that he could work in gold. I chose this mask to not have all of them with Mata Masks and it has got a lot of silver.

Gaaki: some more detailed armor slimmer arms and wider Thighs for a more feminine look. Could change the Piraka armor when needed. Chose silver armor for same reason as with kualus. Mask was chosen since I like it with her

Bomonga: Gold Armor because its left. I chose a more short and bulky stature for that Onua style Look. Mask is chosen since i like it with his bulky body.

Pouks: He looks like that due to limited Metru Brown. Staff is silver because i didnt find any better tip.

The 3/3 split is for a Headcanon I have being that they are Split for a team on the laeft and one on the right. The multiple types of same colors is because of limited parts by lego.

I am free for changes and suggestions. Just feel free to say what your Problems are and I will try to fix it.

Edit to not double post: The eyes were chosen to make it so that both metal colors have a grouping of: reddish, green and blue for the eyes

What is the purpose of the thing on the side of Bomonga’s head? Not saying I don’t like it I just need the context lol. Was trying to remember if he had some type of eye gear in the movie or something.

You may need to change Kualus’s mask as that is a two tone mask and unless I missed something there is a ban on use of two color masks.

Bomonga is definitely the stand out for me simple but clean.

That eye thing isn’t finished yet but its just a modification to the Akaku. I think it was only on painting in two colors but i will try to change that and find a better one.

You maybe right on the mask, I may have read that rule to broadly. In reflection It would be odd for them to ban an official piece from use.

Ok yeah. I think I will reread the rules later again. Probably when any new updates are out.

Hey, man! Glad to see someone else trying out the backwards torso gimmick I came up with. I also appreciate the friction balls, I’m assuming you’re taking an effort to preserve the gearbox functionality, which is nice.

I like your Kualus, he’s an understated build which I consider a positive; not every hagah needs to be super derivative from the original sets to stand on their own. Only suggestion I’d make is to remove the heart light; I think a big factor in this contest will be team cohesion, so having one member of your team stand out with the heart light is a bit odd.

As for Gaaki, I love the colorblocking you chose with the sand/Metru blue combo. The spear shaft is also quite cool with the winding Mahri tubes. The weak point here is the tip imo, it looks a bit off, don’t know how to describe it. Maybe if you added a central blade to give it a trident sort of look?

I think I agree with cynic in that I think Bomonga is the best of the bunch. I like the black/keetorange scheme you went with here. The little greebly on the side of his head is a nice touch, gives him a mechanic vibe. Only suggestion would be to play around with the color blocking of the legs and pelvis; idk why exactly, but I think the gold and keetorange clash on the thighs specifically. Apart from that, real solid.

Unfortunately, Pouks is the weakest of the bunch, imo. He’s always going to be the weakest due to him having to have gold armor if you want to avoid paint. The Bohrok eye pelvis is a bit of a weird choice, and the silver speartip is odd as well, though as you say Pouk’s is limited by the amount of pieces released in Metru Brown and gold. If I were you, I’d focus on improving Pouks, though I’m sad to say I don’t really have much to offer you in terms of a direction to take. It’s a good start though, I think the armor choices are solid at least, and I like to idea of a double sided spear.

Overall though, I like a lot of what you’ve got here! Keep up the work on improving your designs, I’m looking forward to seeing the final result, my dude!

so having one member of your team stand out with the heart light is a bit odd.

a trident sort of look?

Its more that i dont have paint.

The Bohrok eye pelvis is a bit of a weird choice

If I were you, I’d focus on improving Pouks, though I’m sad to say I don’t really have much to offer you in terms of a direction to take.

Will do that now and tomorrow

It’s a good start though, I think the armor choices are solid at least, and I like to idea of a double sided spear.

Overall though, I like a lot of what you’ve got here! Keep up the work on improving your designs, I’m looking forward to seeing the final result, my dude!

i like this. while i still personally would like something purist enough it could actually be a set, these all have just little enough extra detail where i dont particularly mind, and they do look really nice

There’s some really cool designs here! I absolutely dig Gaaki’s very brutal and animalistic-looking weapon, and I like the way you made her armor and her spear staff “flow” - this obviously fits very well with her element

I’m a bit on the fence about Bomonga’s keetorange and dark gold - these two colors seem a bit similar yet different, in a way where one color sort of looks like a dirty version of the other (it may just be the lighting tho). Also, the Uniter crystal piece has a texture which always irritates me a bit because it doesn’t seem to match any other textures…

Kualus and Pouks, however, work really well! I think the mask choices are very good, with Tehutti’s mask for Kualus being near-perfect, as it adds a bit of black, but that doesn’t disturb his overall color scheme - on the contrary! White with a bit of black looks very ice-y and cool

And as you mentioned, using a non-Mata mask really helps set him apart from those characters. Great work overall! 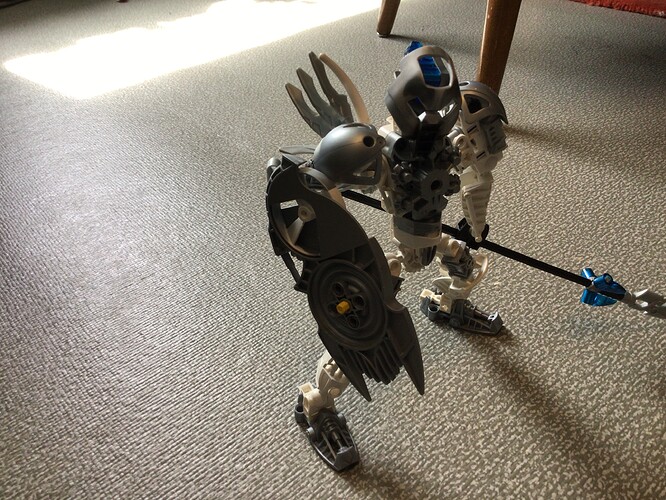 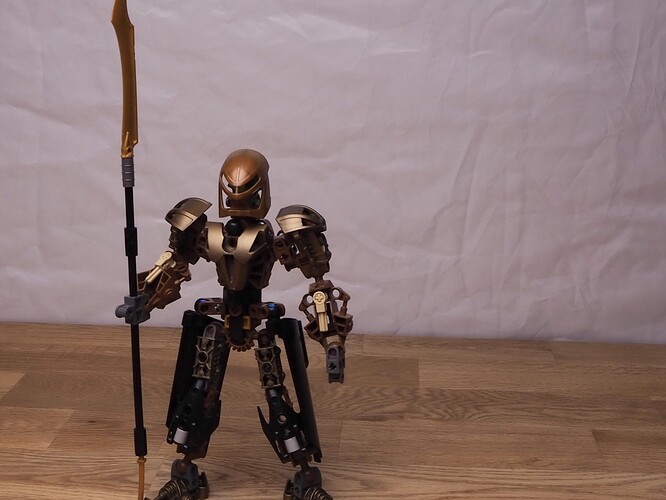 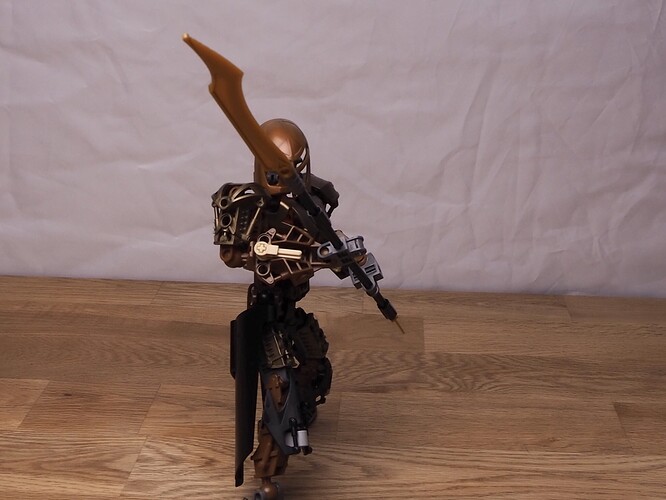