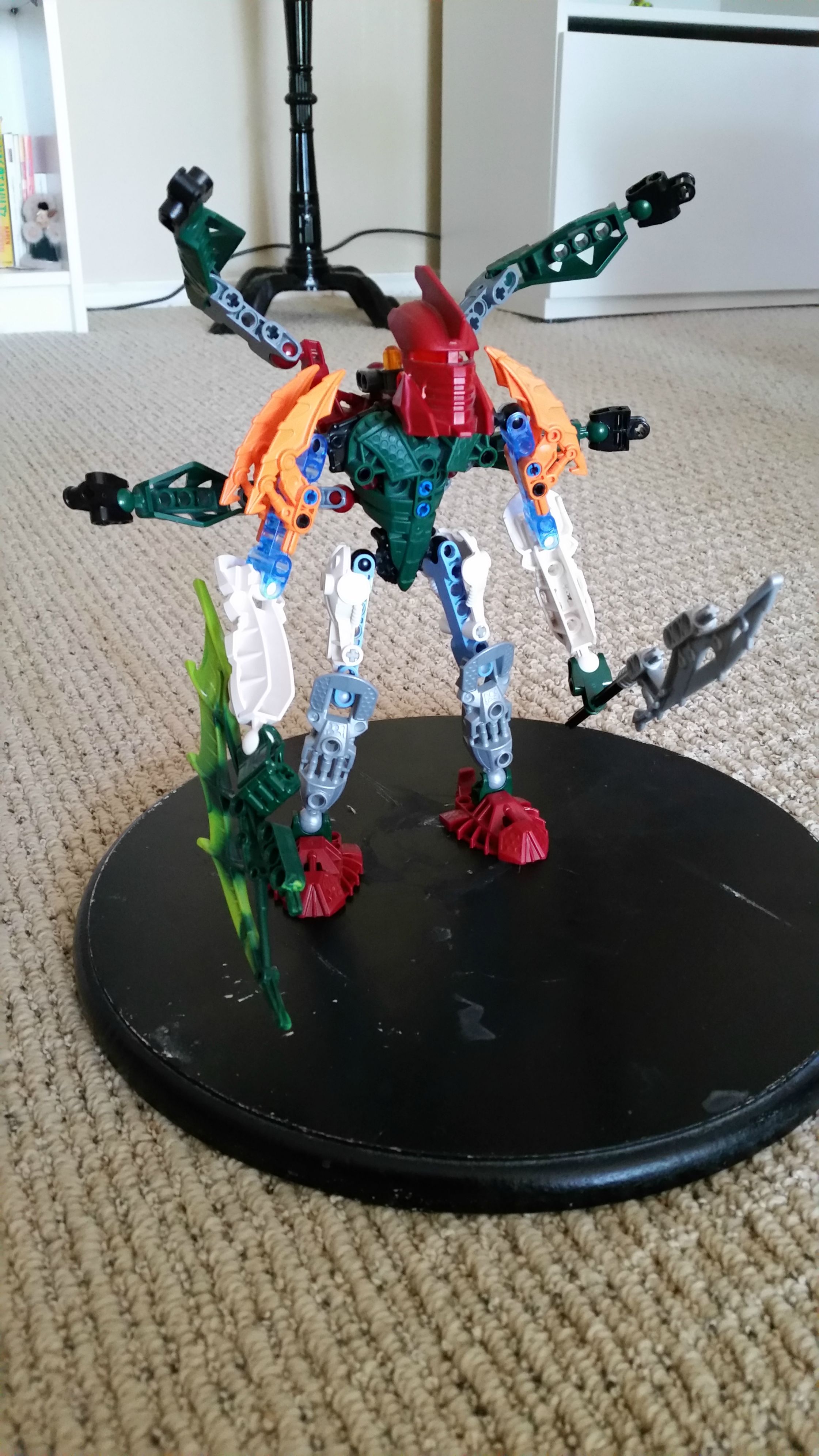 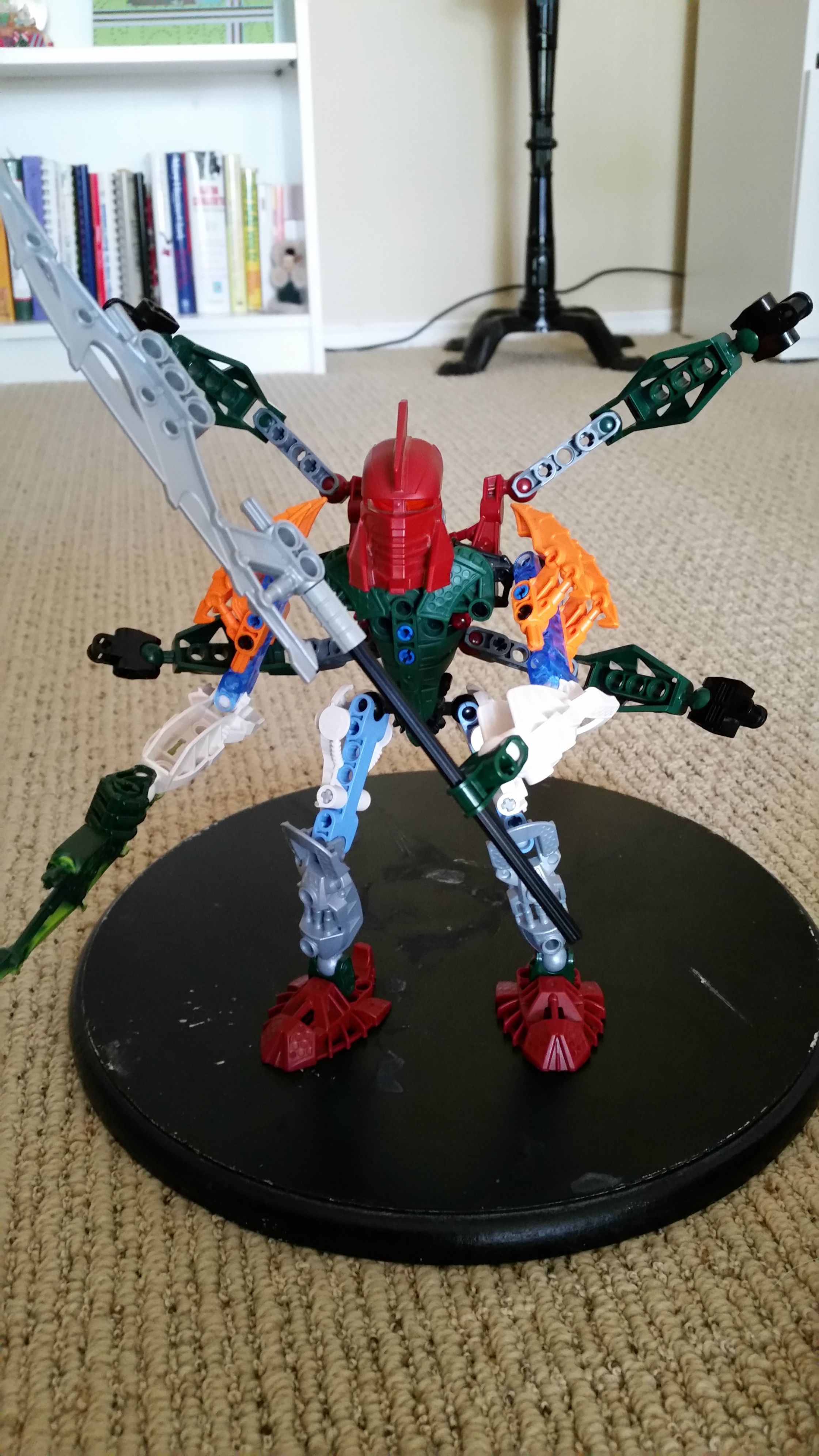 Toa Ihru was sent on a mission to stop the Mechbots, deadly robots that are being used to take over.
Ihru is in an abandoned warehouse, searching around when suddenly 50 Mechbots come up from behind. He jumps out of the warehouse, and they follow. He eventually ends up against the River of Energized Protodermis. He fights them, and thinks that he’s winning, but the stealthy leader of the pack pushes him. Ihru falls into the River, but not before grabbing and taking the leader with him. The leader gets fused to Ihru’s back, but Ihru is in control of both of them.

Basically robot gets fused to character’s back, but character is in control of robot. Here are pictures of Mechbots and Ihru.

Cool premise. I like the backstory.
The MOC is fine for what it is, but doesn’t really have a color scheme.

I tried to keep the main colors dark green, white(ish), and red, with blue and orange as accents, but I can see the orange and blue as out of place.

I would say try to find a color scheme as opposed to what it has now.

Just a reminder, Zackmaster, that Double Posting is against the rules. If you need to edit a post to include something else, use the pencil button. If you need to make multiple replies, use the @ symbol like this in a post:

@Political_Slime Yo man I’m using you for an example

@legomaster1378 Yo, are you also fine with being an example?

Just read this to understand. This is a page with all the site rules.

This topic should also help.

That page does not exist.

Just edit your posts via the pencil button. It’s right under your post.

against the “River of Fusion.”

a.k.a a pool of Energized Protodermis

The MoCs are okay. Nothing really wrong with them for what they are (other than the horrible colour scheme), but nothing much to praise about. But that’s understandable due to limited pieces.

I like the idea a lot. The moc is simple, but as others have said, the colours are off, but I understand your extremely limited pieces*. 7.6/10

(*I have limited pieces too, I only have access to 6% of my bionicle collection)

I just neeed to be harsh… seriously…

This colourscheme is death… like… It does not fit anything 2/3 somewhat simmilar colours are fine… but like… this ammount? Nope, none fit…

Also, You could experiment with custom torsos, since Inikabuild is… you know

wha… liquid river with the powers of the staff of fusion? That sounds too much like Energized Protodermis

I didn’t even know this was the Inika torso lol… I got it with Gresh.

But I don’t know why but the wonky colours somehow work.

@legomaster1378 Yo, are you also fine with being an example?

I have changed Toa Ihru immensely. Giving him an improved color scheme of Black, Silver, and Green. Weapons have not changed. 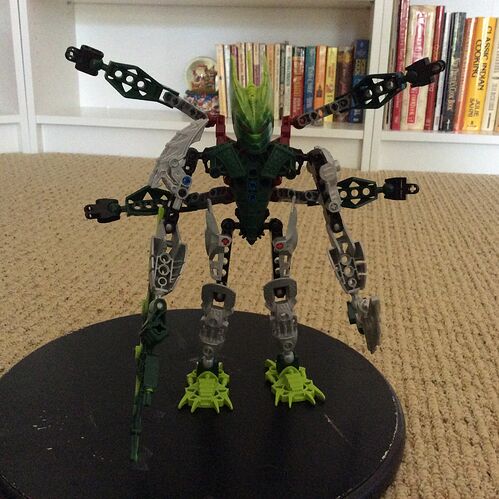 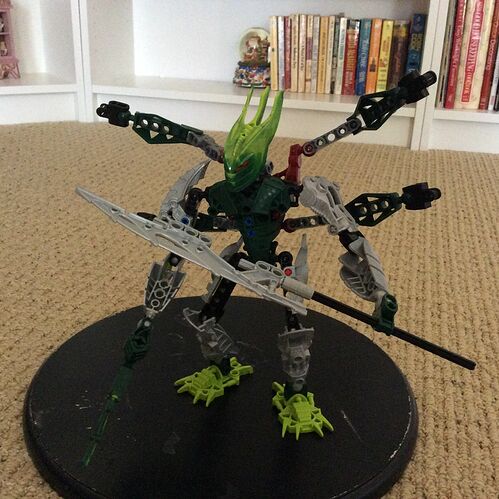 Sorry for the asymmetry in the arm armor. Also sorry that the mask and feet don’t work that well, but I think it’s better than before.

I recommend some green on the back-mounted arms. Speaking of which, it’d be best to find an alternate solution to that jarring dark red av-matoran body.