Toa inspired by my Hagah moc

Ever since the first section of the Hagah contest ended, it felt like a waste to totally forget about my Kualus moc. So, since I’m no longer participating, I thought of this as a good chance to have some fun with it and took a few things from the moc to make a new one while using a color scheme that I didn’t have the chance to use during the contest since we were restricted to a single metallic. 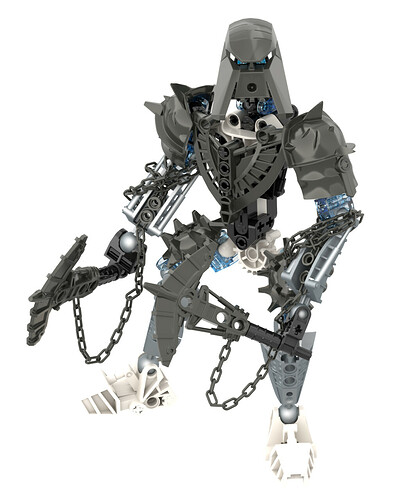 One of my main goals here was create an original color scheme, so, this toa has a considerable number of colors (pearl dark gray, pearl light gray, white, black, trans-medium blue, and trans-light blue). I’m aware that many of these pieces don’t exist in these colors, but since it’s just for fun and I’m not currently planning to recreate it irl, that should not be a problem at all.
All the armor and the legs come from my Kualus moc that was supposed to represent icicles and I ended up choosing a Kualsi due to how useful it could be in many different situations. 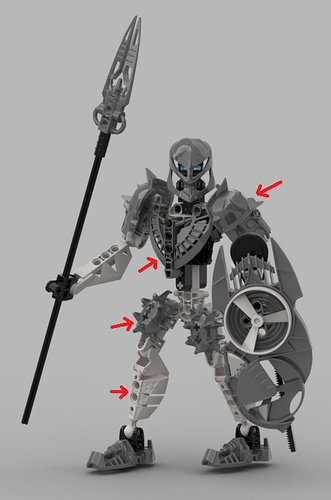 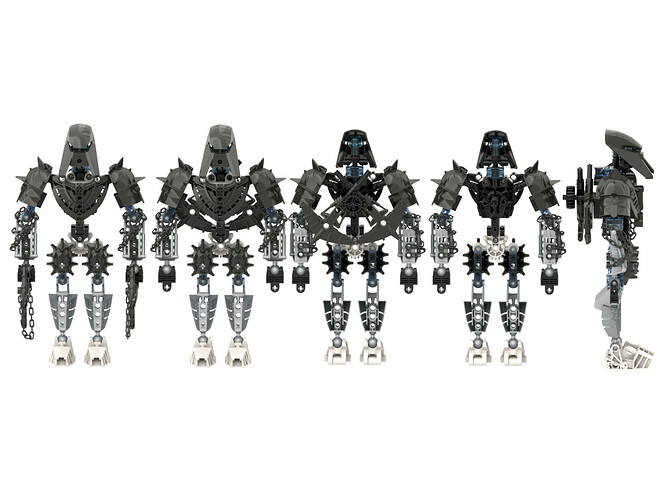 Regarding the weapons, I reused the spear tip from my Pouks entry (made by Vahki6) and added chains to it and the moc’s forearms to give them a similar appearance to the Blades of Chaos/Athena/Exile used by Kratos in God of War. I still need a name for them, I’ve considered Icicle pitons due to their resemblance to Onewa’s weapons. And btw, they can be stored in the back like Kratos does. 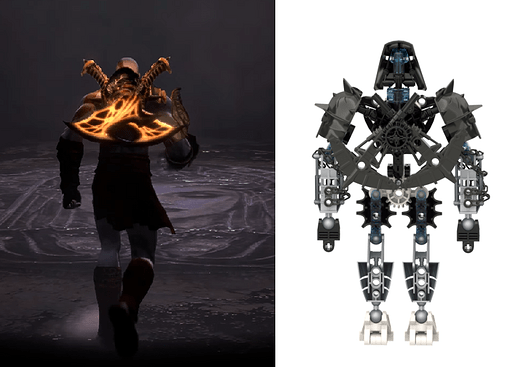 And here are some other photos. 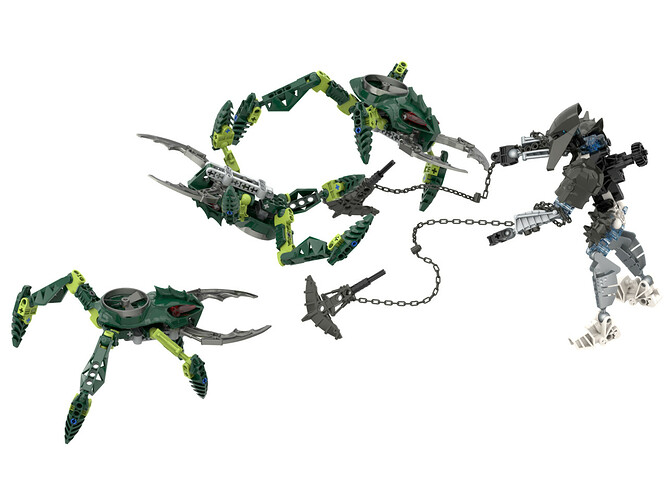 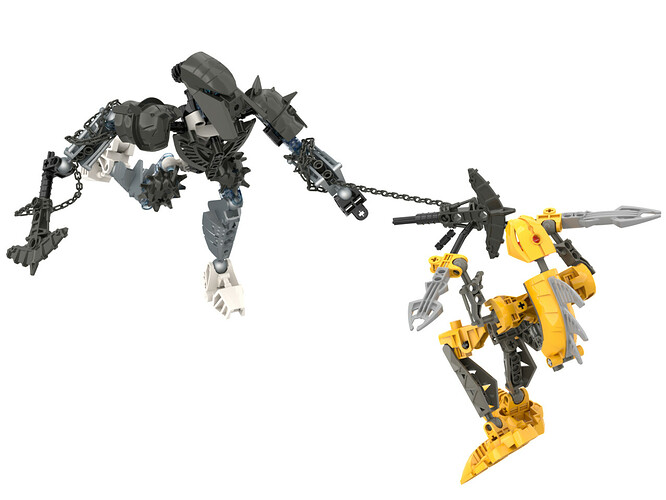 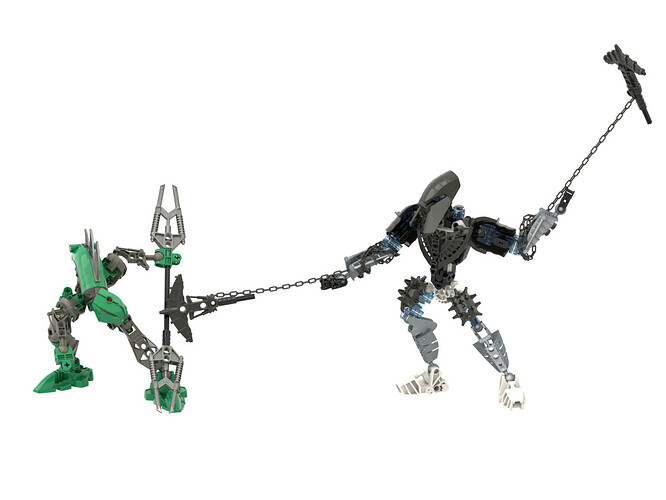 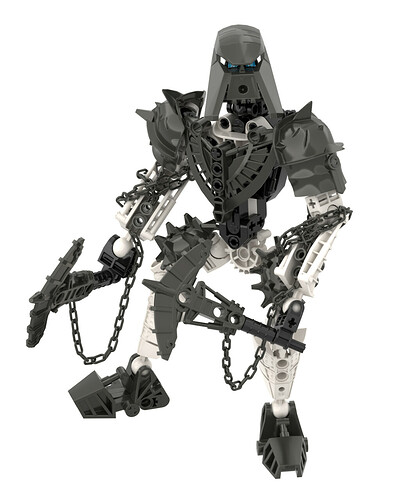 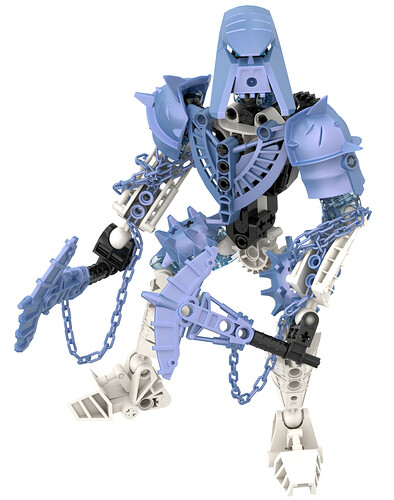 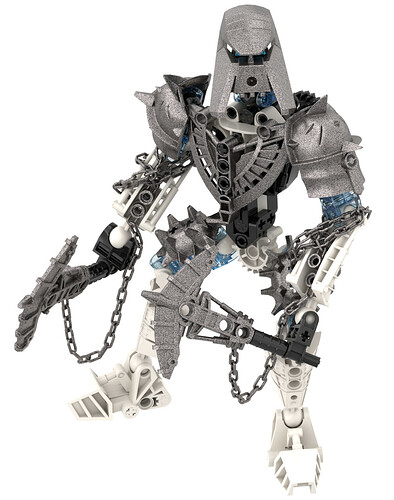 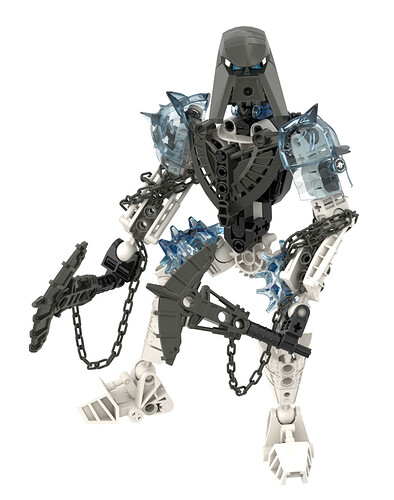 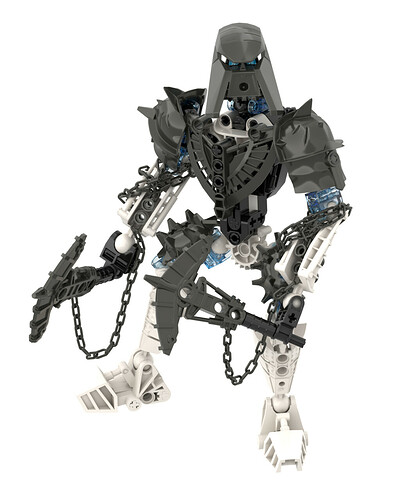 Cool.
that was intended
could use more white though

I’ve thought the same thing too, just wanted to try something different this time. I replaced some of the white with pearl light gray, but maybe I overdid it, same with the black.

you should probably put more pearl dark gray on the feet, or more white on the arms.

He looks nice but im not a huge fan of multiple metallic colors in a mock unless the base color is one metallic color with accents of another. The weapons however are very cool, very god of war

He does look good, Loving the weapons, very noce idea Like Cynic said though the multiple metallic colours are a little off though. Maybe replace the silver with more white?

he looks nICE.
if you met him in real life i think he’d be pretty CHILL.
or who knows, maybe he’s a kind of FROSTY guy.
good job on this COOL moc.

I’ve been thinking about that, so I ended uploading more photos with other color schemes that have more white.

You are right about the frosty thing. He doesn’t talk too much, which means he’s a pretty COLD toa. So you might consider trying to break the ICE when talking with him or he’ll most likely put the FREEZE on you. But that’s just the tip of the ICEBERG, this guy is always SNOWED under his toa duties, in other words, too busy to just CHILL with you.

ah, it wouldn’t be the message boards without puns.

This is really cool.