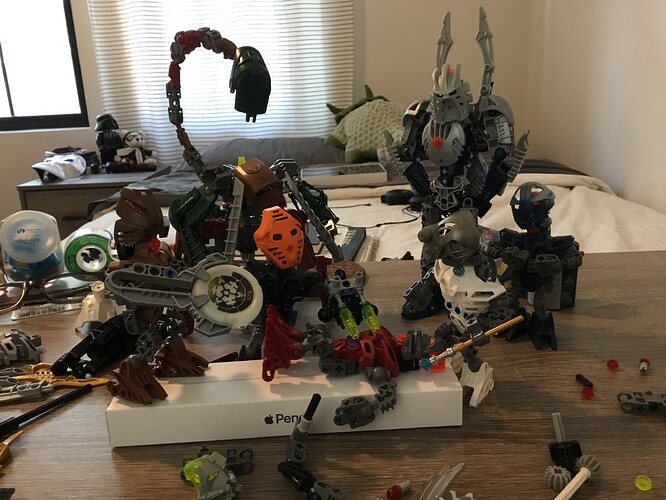 image3264×2448 1.82 MB
The Darkhunter war had kicked off with the great deception by Tuyet and Nidhiki, that the beloved toa Lhikan had been brutally slain by the scum that were Darkhunters. This galvanized and enraged the matoran, and soon an all out war was declared by a Tuyet that seized control of all military matters in the city. She had the three darkhunters in captured by Lhikan and Nidhiki publicly slain, which incurred the full wrath of the shadowed one. While the toa were generals in this new war, there were a select few matoran who made a name for themselves and rose through the ranks. Chief among them was Jaller, who’s courage and valor made him a beloved hero as he led matoran battalions.

However, this day fortune seemed gravely against him. 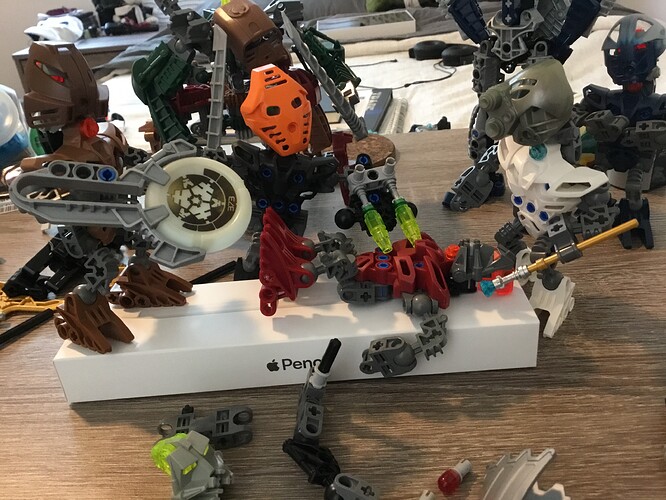 image3264×2448 1.5 MB
“We’re losing him! Feed more energy!” Nuparu, who was trying to fix the mangled metal of Jallers frame. The Toa-matoran had taken multiple energy blasts from a darkhunter in order to save a fellow worker, which tore him open and shattered his mask. Ga-metru was under attack, so Tuyet had him taken to Le-metru for urgent repairs. Matoro used an instrument to make sure Jallers brain functions stayed online, and Hewkii used his disks of regeneration in an attempt to fix his damages. But the wounds were fatal, and all seemed lost… 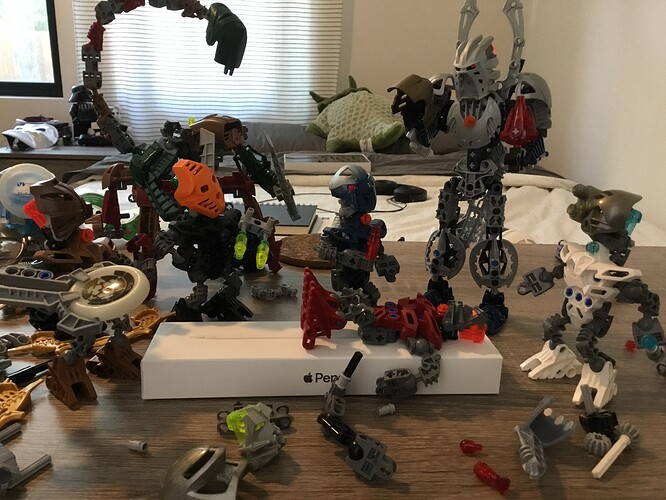 image3264×2448 1.39 MB
Then, Tuyet stepped in with the aid of Vhisola. “Place the toa stone on his chest, allow me to help,” she commanded, holding a golden hau and a larger fragment of the nui stone. Vhisola did as she was told, and the other matoran backed off as they commanded. “Tuyet, Jaller needs a mask, otherwise he’s just going to die of energy loss.” Nuparu pleaded, not wanting to take the Toa-matoran off his support. But as Tuyet affixed a Hau that all in the room recognized, he fell silent. 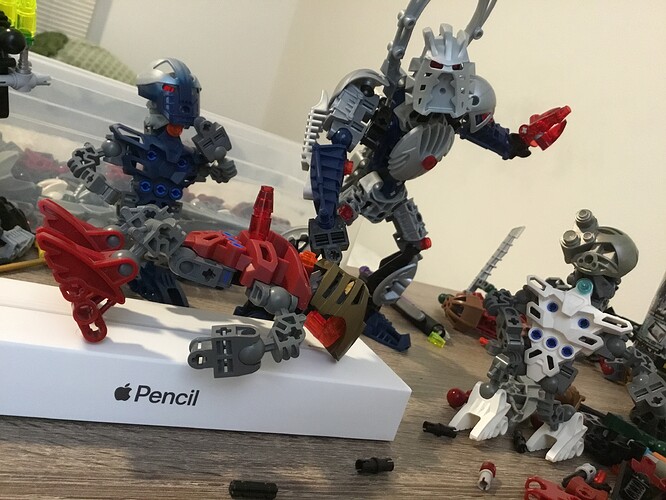 image3264×2448 1.3 MB
Channeling but a fraction of the wellspring of nui stone power coursing within her, Tuyet supercharged the toa stone, which sent surges of elemental power coursing through Jaller. His eyes shone bright, heart light flashing like the birth of a star, and all were soon blinded by the miracle before them. 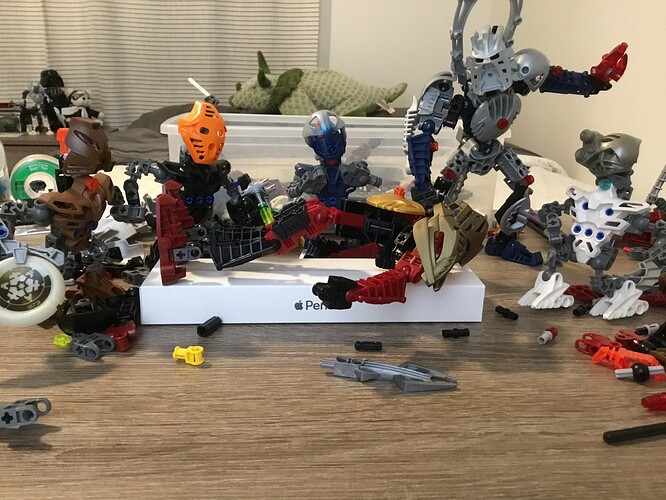 image3264×2448 1.48 MB
Not only was Jaller completely healed of his wounds, but he had been transformed into a toa. 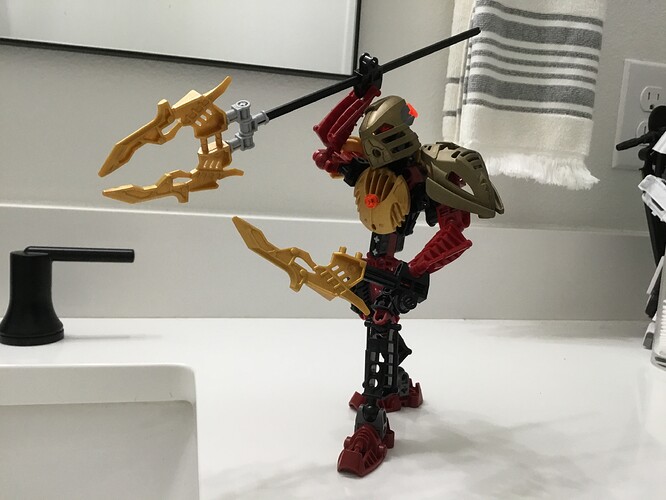 image3264×2448 1.47 MB
Reborn with a raging fire in his heart, Jaller struck out onto the battlefield. With his supercharged fire powers, many darkhunters were slain that day. The battle cry “For Lhikan!” rang throughout all of Metru-nui. 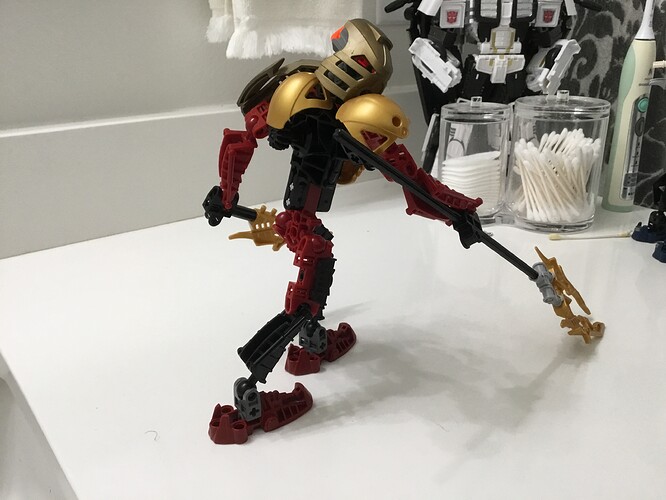 image3264×2448 1.44 MB
Savage as a burning fire, it was only when the battlefield was littered with fallen Darkhunters that Jaller’s blind rage at last smoldered. 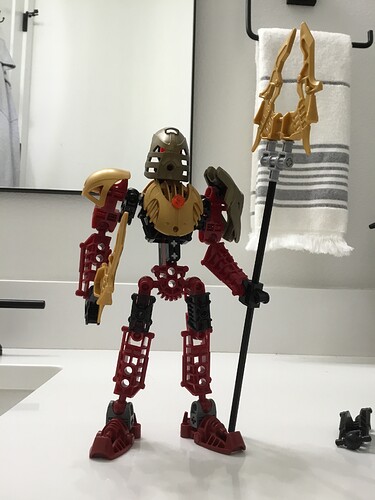 image2448×3264 1.47 MB
Armed with a fire spear and two burning short swords, Jaller was a formidable toa. His shoulder plate bore the shape of a kraakhan to strike fear into the hearts of his enemies. 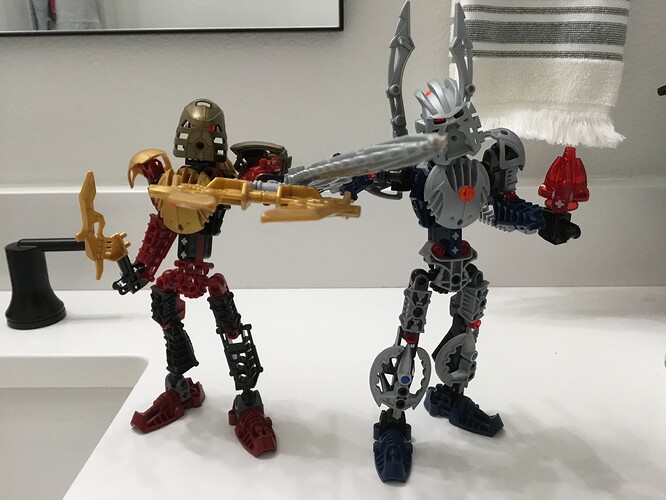 image3264×2448 1.56 MB
Tuyet was most proud of Jaller, and delighted to join him in battle whenever possible. However, Jaller himself soon grew disgusted with this burning bloodlust he felt on the battlefield. What would Lhikan have said if he saw how the new toa fought on with his mask, the very mask that had helped save his life? Tearing the shoulder plate off, seeing the kraakhan as a dishonor to his Hau, Jaller became a reserved tactician. One who fought to defend rather than give in to wanton slaughter. He would fight, yes, and he was a brilliant strategist on the battlefield, but Jaller developed a nerve of energized protodermis. After the war, Jaller dedicated himself to the rebuilding of Metru Nui, working hard to support and aid the Matoran with all his heart as toa Lhikan did when he was a matoran. The first of a new generation of Toa, Jaller was soon enlisted by tuyet to be the start of a new team. For all his differences from his predecessor, Tuyet always saw a little piece of Lhikan within Jaller. Time would tell if she could build a suitable team from his origin…

(To be continued, with a few modifications to this toa empire Jaller)

oooo fun
this is a very interesting universe your building!

Yeah this is really cool. One question though: is this meant to be Dark Mirror, or just another similar alternate universe?

It’s an alternate version of the dark mirror. It’s like the empire of toa universe, but a few things are different. Tuyet isn’t as one-note evil in this version, and there are still “heroes in the system” to keep the empire from being downright evil.