This is my version of the Rode’s user. 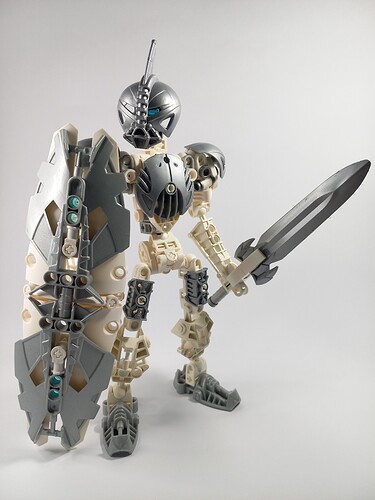 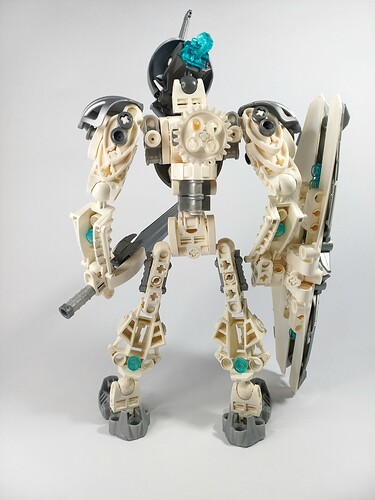 Only your mask is known. For his armor design, I chose something more traditional, pure white with silver, and armor that resembles his mask. I tried to use shoulder pads and a breastplate that resembled the design of the mask. 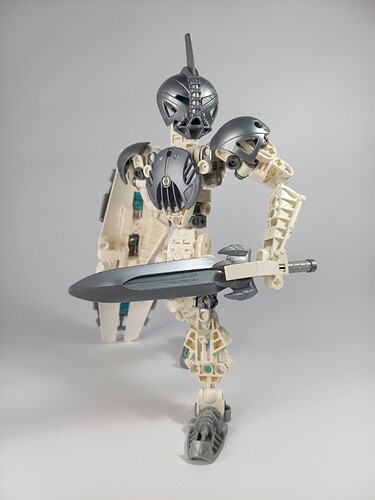 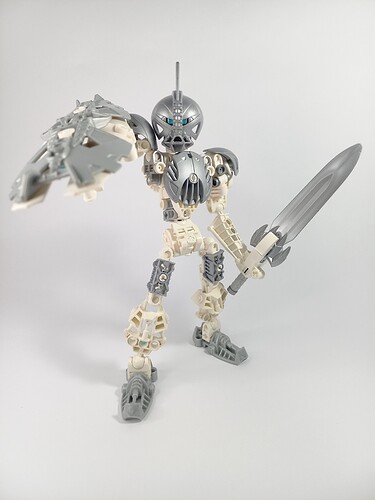 The traits are the rounded shape of the mask and the side edges present in the mask. The image below kind of highlights this detail. I apologize for the quality of editing, I don’t know how to edit images so I tried to do my best to try to convey the idea of ​​the design I had. 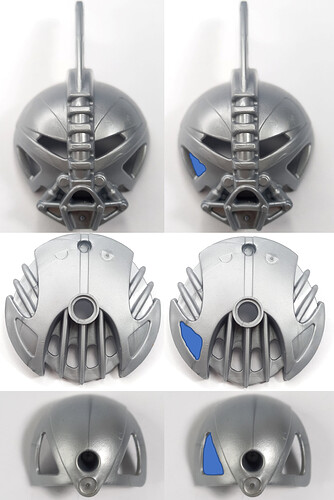 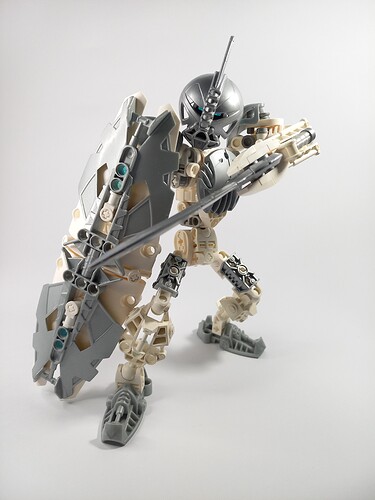 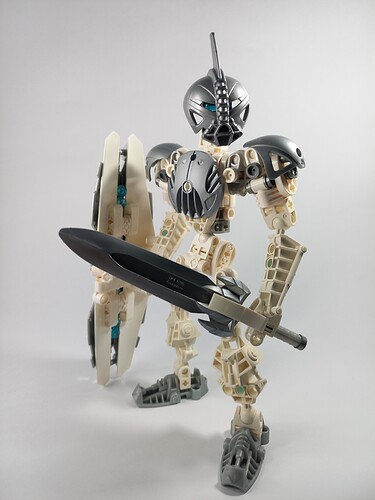 The Kanohi Rode is the Mask of Truth. It allows its user to see through all kinds of deceptions and disguises. 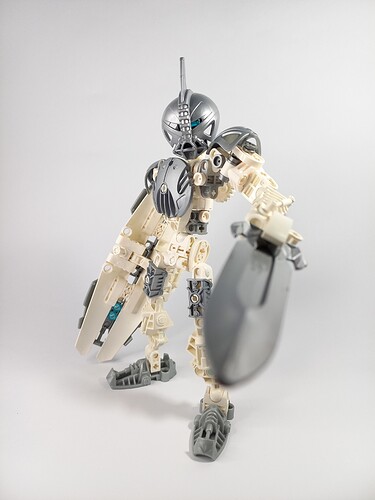 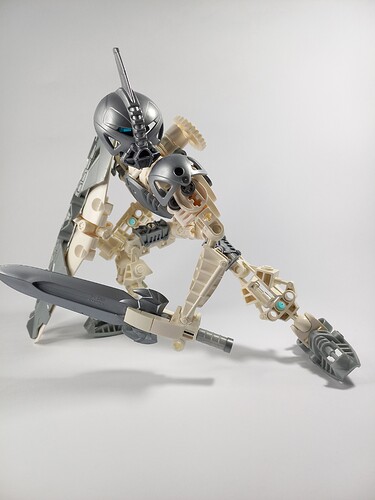 I named him Mafa. The reason? It was the only location left on Ko-Wahi that I hadn’t used to name an ice Toa Mangai 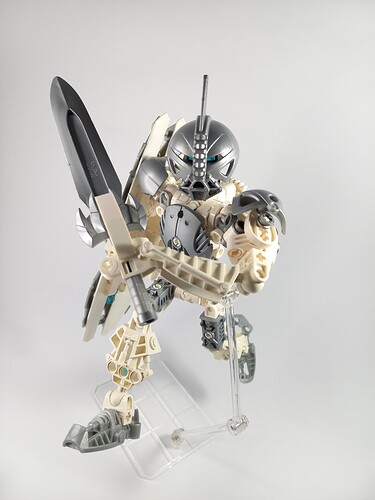 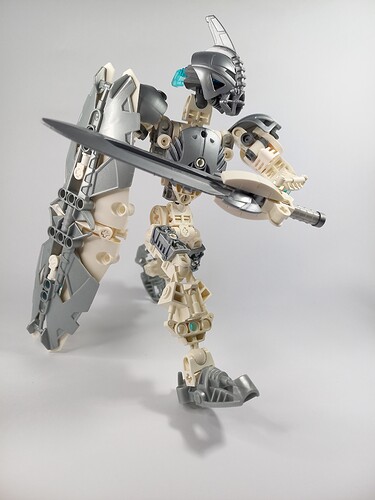 I wanted him to look like a knight, so I gave him a greatsword and a giant shield. It also references the design of the mask. A round shape that reminds me of a shield and a horn that could be a sword. I named them as The Shield of Clarity and The Sword of Light 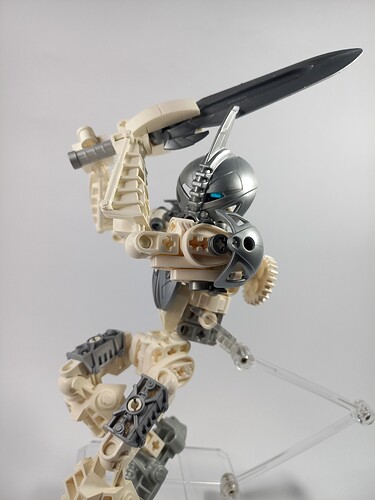 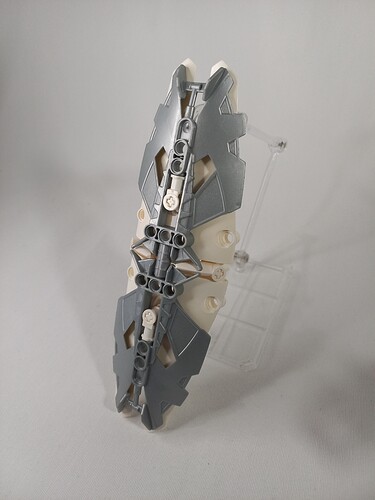 His tools, especially the shield, has the ability to absorb heat from attacks that hit them directly and redistribute it in the form of energy between the shield and the sword (yes they can transmit power from one to another). So, in addition to controlling ice, when he faces fire opponents, he can still generate simple attacks (which can be powerful) of light.

During the fight against the kanohi dragon, he could use his shield to absorb the dragon’s fire and use the energy, sometimes to blind him with the flashing’s shield, sometimes to hurt him using the sword’s light ray.

ah cool, is that a custom torso i see?!
i like the colors and the design process, solid moc all things considered

Pretty nice, I like the shield a lot, though the torso is great too.

That’s my pun, you thief

Er anyway this Toa moc looks pretty cool, the knight aesthetic and build are awesome. The torso is definitely unique, and I like how it mimics the metru torso shape using other parts. The weapons and lore are also neat, so overall this build is pretty good. Nice job

Love that chunky shield design, and I’m always a sucker for toa who’s weapons are knight’s kingdom swords. Awesome job all around.

(Edit because this build was so simply great I had to come back to it: the photography and posing here really slaps. It’s an opportunity for converting character that I feel a lot of builders overlook, but you took full advantage of it here with this Mafa.)

Love the sheild, and the rest of the moc is looking pretty good. Been liking these mangai so far, keep it up!

He looks very noble, like the kind of guy worthy of wearing a Rode. Cool moc

Man this is so good. Love a well made custom torso with high articulation.Hope you don’t mind if I use a few things in here for mocing.

That’s a beautiful shield. Probably the most regal looking of your Ice Mangai. I love the spread of silver, looks like he’d ft right in with the noble silhouette cast by Lhikan

(Edit because this build was so simply great I had to come back to it: the photography and posing here really slaps…)