Like her fellow Bushido Students Amethyst was followed by a light beem and teleported into a cave where she could see a golden great Kanohi mask floating in the air and a voice telling her she was to fight a great evil, revive the spirite of light Pandora and protect the six who one day will join her in the battle against a great Darkness.
(Original Used a sword) 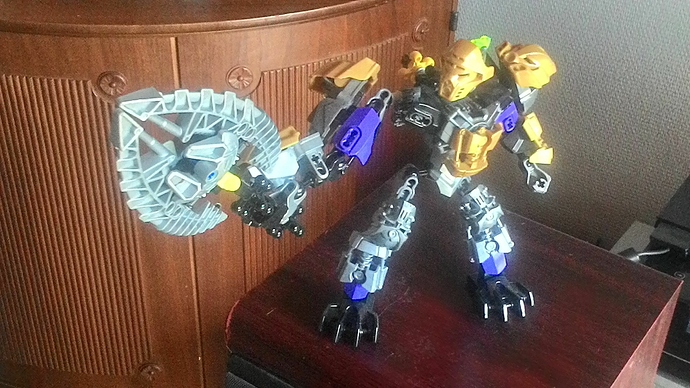 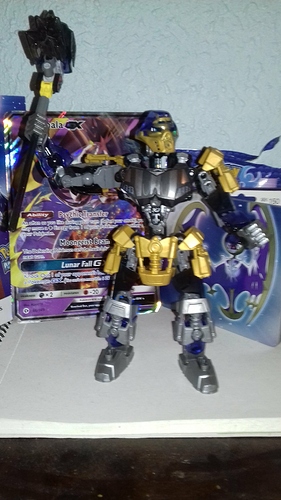 Her main weapon is a giant gravity hammer, thanks to her elemtal power over gravity she is able to use the heavy hammer with out any restrictions, and Amethyst also where’s the mask of Pressure, with it Amethyst can change how she is seen by others and for intimidation.

Amethyst may not be one of the taller of the Toa but she still packs a mean punch. 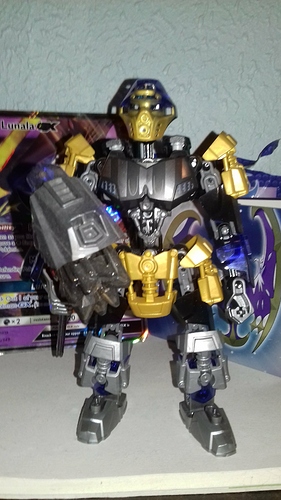 Personality wise Amethyst is quick to be rec-lease as she is rather over confident thanks to her elemental and mask powers as well for her gravity hammer. She is often seen being out numbered by enemy’s, though this do not stop her and she often by luck either get saved by friends or defeat the enemy’s surrounding her. 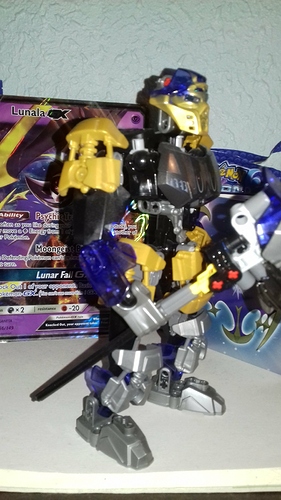 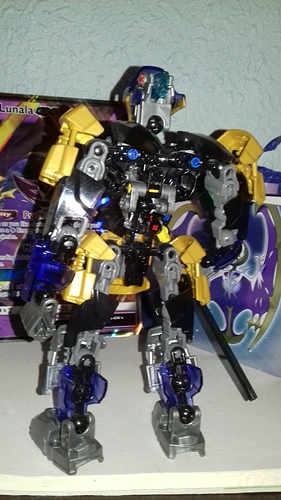 Even though she is a female she is rather boyish in her way of living and fighting stile, Amethyst is also one of the youngest Toa members just a bit older compared to the Toa of Air Skyress. 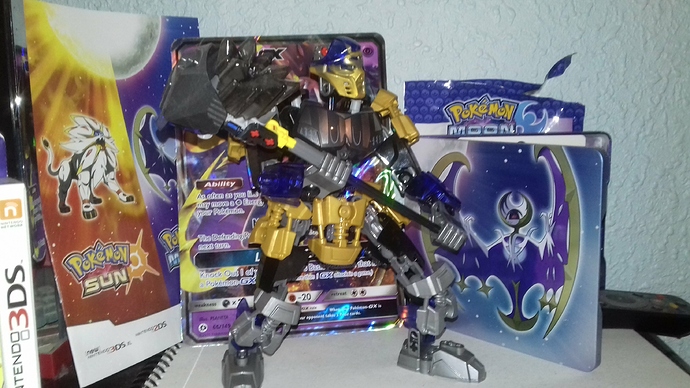 Nice build, but mabey make her a little taller. The chest is kind of weird for my
Liking, try moving the golden pice down with the armor. A nuva breastplate looks good on female Mocs. Try making the legs longer as well. The color scheme is solid but she also gives an Onua feel. The corrupt mask helps with that but the weapon looks similar. Try a spear or sword, mabey? Also again she is short and add some armor on the back. Please let me
Know if I can help in anyway.

The background is jarring, but ill try to see through it.

The waist looks really thin and the back is a bare gap.
The 2015 armor add-on acting like skirts works tbh-

Looks good but the waist should be thicker.

Color scheme is still very onua and I’m not sure why you chose the Vader chest piece but she definitely looks better. I’d thicken her torso though so she doesn’t look like a literal hourglass and maybe add one technic beam hole worth of height to it also.

I wanted her to be short that, and for the color when looking up older information on Toa of gravity they had the same colors as the Toa of Earth so that’s why I used those colors and the Onua gen 2016

And the Vader chest? Becuase the striping and look of that peice makes it stick out like a sore thumb.

Is the hammer a recolor of Ekimu’s? Just wondering…
I think you have a good idea for this MOC but the torso needs some work.

Are you bragging about your Pokemon collection by putting it there?

And the Vader chest? Becuase the striping and look of that peice makes it stick out like a sore thumb.

I took it because it was the only piece that I had that where not having Eye’s, Umarak markings or making her look like one of the skeleton warriors.

Is the hammer a recolor of Ekimu’s? Just wondering…I think you have a good idea for this MOC but the torso needs some work.

yes it was a recolor as you could see I did use to have a giant sword for her but wanted to give her a hammer (could not come up with a good looking one though).
And for the torso yes I have made changes to it but not on this or on the two mocs I will be posting shortly the changed torso will be on a Toa and her evil twin sister, did not have the parts needed to add the same change to this and my other two mocs sins I need parts from the Star Wars CCBS line (a line that is slowly being removed from every story in my area just like the bionicle line was and is being)

And no that is my recording space for a few pokemon TCG pack and pokemon Gashapon openings I did, and I felt like it was a good background for taking photos and it is the only area in my room with the space needed to take the picture’s and it like I said looked like it could be a cool background.