After posting Kualus, I came across the current TTV ruleset, and I can see that Pouks will require some changes, such as the silver on his shins and the Vahki hip piece. Oh, and he’s wearing a version of the Ignika

but don’t worry, it’s just a placeholder, which is (currently) allowed! I rather like its long, weird look, and also, I was running out of silver masks that weren’t Volitaks, so here he is: Toa Pouks.
Being described as loud and boisterous, I wanted to make the Toa of stone’s design reflect these traits. Firstly, I beefed him up to make him look like a guy who would solve most of his problems with a jackhammer. Next, I gave him relatively small feet with “toes” as a contrast to his large arms, sort of imitating an underdressed Arnold Schwarzenegger in the 80s. Finally, I used the lesser-spotted backside of the Vezon mask, which gave him a very large head… And then I realized it: I had subconsciously built a gorilla! And I loved it! This meant that Pouks would be a friendly, but imposing giant, who would likely beat his chest after a victory 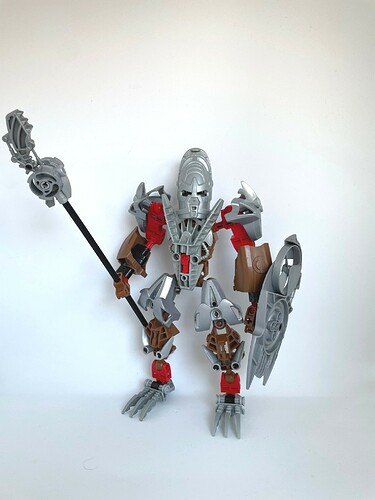 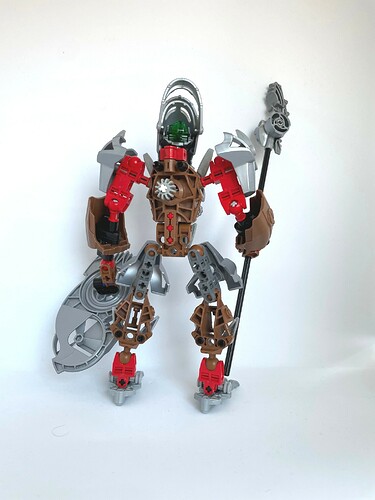 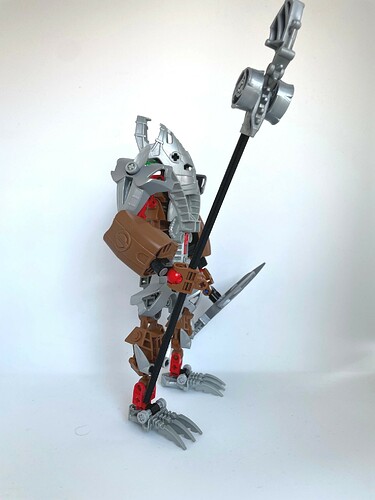 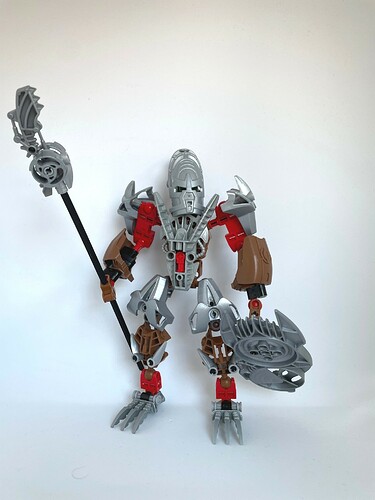 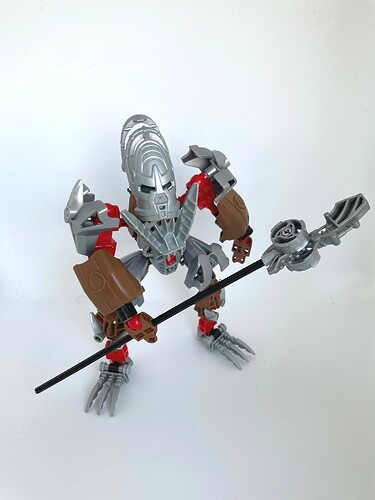 Those colors clashes too much. The choice of mask is weird at best. the staff end is hideous. The armor doesn’t really match or have any cohesion, And the lower arms are just ehh… how should I put this? Highly offensive to my eyes.

I know I’m sounding a bit rude with this comment and I do apologize for that but this is definately a big downgrade if I compare it to your other Hagah mocs.

Edit: The feet shouldn’t be clawed it doesn’t feel very Toa like

@Tarkur Hey, you’re right, that is a lot of criticism - but I think you point out some very specific issues with it, which I can definitely use for something. So your feedback is appreciated

Also, I’m happy that you liked the other ones!

EDIT: I’d actually like to ask you - what mask do you think would look good on him? And how do you feel about the Nuva armor on the thighs?

@Bukkey That was a bit of an inspiration, along with Popeye

What are the problems?

This is my opinion, but I felt his beestly foot is strange as a Toa…Sorry!

I think change the spear, mask, and remove the red, and the MOC will be pretty OK. Probably change the feet as well.

@Bukkey No need to apologize, I want to hear your opinion! And I can definitely understand why you feel that way about the feet

@Winger I’ve already found suitable alternatives for the mask and feet, so I’ll look into the other things next