Continuing once more with the new D&D characters! 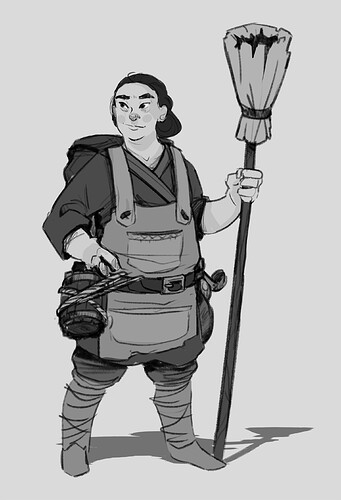 Tomoko Miyazaki was just a girl when her father became one of the most renowned chefs on Kikena Tochi. But her father’s fame came at a great cost; a local gang began to extort the old man, and when he decided he would no longer make payments…
Tomoko returned one night to find her family restaurant ablaze and her father murdered. Vowing to never be defenseless, Tomoko dedicated her life to studying the martial arts and upholding her father’s legacy.
Taking a job as a local hostess, Tomoko practiced her cooking and developed techniques to merge the spiritual and culinary. While taking out the trash in the back alley, she encountered the nomadic Tortle Ket. Tomoko began using Ket as a testing audience for her new dishes and the two quickly became inseparable friends.
Tomoko would become enraptured by the stories of two regular patrons, Kenshiro “Ogawa” and Harlow Devereaux. Deciding to quit her meager job, she joined the two on their adventures in hopes of travelling the world to discover the perfect ingredients.

I’ve been looking forward to drawing Tomoko for a while. Unlike most of the party, she’s a pretty down-to-earth sort of character, both in design and in personality. That’s lent itself to perhaps less of a dramatic look, but her mundanity gives her a homeliness and comfort that her character is known for.

There’s still two left to go, only one of which I haven’t drawn in earnest yet. Look forward to more of this chaotic new party!

a spiritual chef, huh
she good at making soul food?

a spiritual chef, huh
she good at making soul food?