I wasn’t sure about posting this here, because I wasn’t sure how this site felt about anthros outside the Lego Chima line…

This is a character from a fantasy story I’ve been working on for the past 8 or 9 years now called ‘Legends of Aeluria’
It is story of a familial line that has a central part in an ancient prophecy, beginning when the prophecy is first given, and ending where the prophecy comes true…at least that’s what I’ve got figured out right now…

All the characters in Aeluria are anthropomorphic felines, hence the name ‘Aeluria’

For those who don’t know, it’s derived from the Greek word ‘aeluros’ which means ‘cat’

Torah Archelaus is a daughter of a missionary to a pride of desert dwelling lions, who went ‘native’ after her father died and her mother agreed to marry the tribal king for protection.
Many of the tribe members look to her as a princess even though she is no blood relation to the pride’s king.
She became their best female warrior and huntress, while her mother became the tribe’s teacher and designated high priestess. 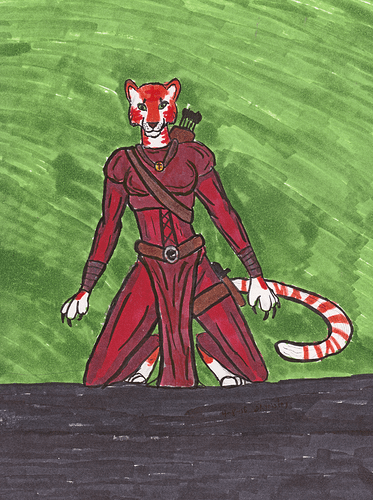 It’s a kitteh, but not as cool as my kitteh

I wasn’t sure how this site felt about anthros

anthros are just a form of visual stylization (why is that not a word?), the controversies are aimed more at the “bad side” of the following, rather than the art itself.

onto the drawing itself.

It does a good job at mixing both human and cat features, rather than just being a human with fur and an animal head. I think either the neck is too long, or that the head is a bit too small. other than that, there isn’t much a can criticize. the clothing is interesting and the smaller details are pretty cool.

wait, she has a quiver, where’s the bow?

Thanks. There are some things that I haven’t quite figured out about drawing anthropomorphic creatures and characters

Yyyeah as for her missing bow, I got kinda lazy when drawing her arms and just didn’t draw it…so we just got an anthro golden tabby tigress in an kneeling pose…