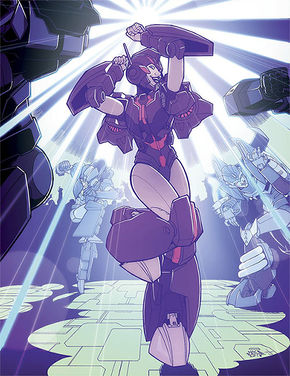 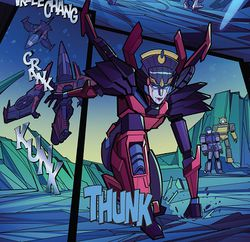 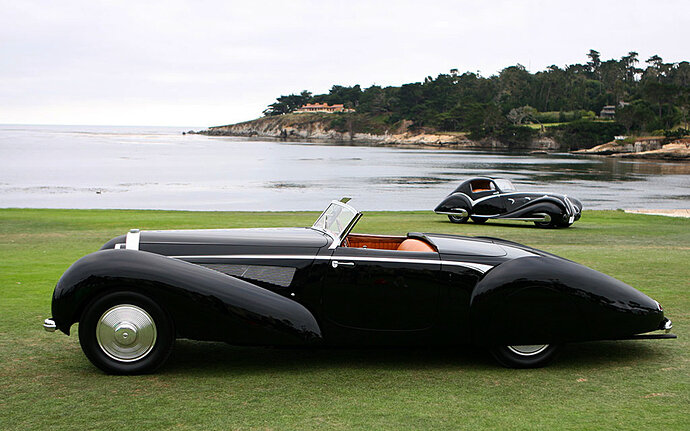 Weapons & such: not much, but just before she boarded the Salvation she had gattling guns that flip out from the sides added. She also has a small blade, almost like wakizashi, but with a European style blade.

Bio: Juliana was created by Human named Craig Philips {for the record, mostly random name}. Craig loved his car, He waxed her every week, made weekly tune-ups, and kept her running like a dream. Only if she could talk back. This gave Craig an Idea, over several years, he manged to change his beloved Juliana into a transforming robot, but she had no life, no spark that would make Juliana into a living thing being. So he traveled to Cybertron. He smuggled Juliana onto a cargo ship and they both rode it to the planet. He than snuck into the Autobot city and stole a protoform. He made his way out of the facility and found an abandoned building in a deserted part of the planet. He spent almost a week installing the protoform into her frame. Then she moved. She came to life, just like he dreamed. She was beautiful, and he told her so. “Oh, your just saying that.” she responded. She was a shrinking violet, just like he envisioned. Craig and Juliana went back to earth.

They spent a good 20 years together on earth until Craig passed away, as all living things do in the end. she then decided to join the Salvation. She now works as an entertainer at Antillian Sunrise.

Anywho, I like Juliana’s concept. It’s a very neat and original backstory. There’s just one problem, though.

He smuggled Juliana onto a cargo ship and they both rode it to the planet. He then snuck into vector sigma’s chamber. There he begged Vector Sigma to give Juliana life

Unfortunately, this universe’s Vector Sigma is inaccessible at this point in the timeline, and has been for a very long time. However, the backstory could still work if this Craig fellow instead took a spark from a Hot Spot somewhere.

what in the name of Mata Nui is a Hot Spot,

and did you get who Craig Philips is referencing?

Sorry, I forgot this is Prime. I only ever watched the original tv show plus the first 3 Headmaster episodes. I didn’t know that it was any different.

I’m glad you like the back story, I wrote it in about 10 minutes, I took heavily from Pygmalion from greek mythology.

what in the name of Mata Nui is a Hot Spot,

It’s from IDW. Basically, it’s a place where sparks form without bodies.

Sorry, I forgot this is Prime

Actually, this universe is pure fanon. It does take a lot of inspiration from Prime/Aligned, though.

Actually, this universe is pure fanon. It does take a lot of inspiration from Prime/Aligned, though.

this universe’s Vector Sigma is inaccessible at this point in the timeline,

well, you never said when he reached Vector Sigma., was Vector sigma ever active in the timeline?

Oh, Vector Sigma is active. The problem is that nobody can get into it because the key’s been lost for ages and won’t be discovered until TOTGA.

That’s what I meant.

Just so we’re on the same page, what do you define as Vector Sigma being active?

Being able to be communicate with. like in the original tv show.

Then no; Vector Sigma hasn’t been, as you define it, active.

There is only one way in or out of its location and those doors only open in response to its Key.

Seriously, in TOTGA, everyone tried everything short of leveling the city of Kaon to try and get inside and it never budged at all.

Transformers: Twilight of The Golden Age (TOTGA) is an RP that Chromharpoon GMed and is what this RP, Transformers: Salvation, is a prequel to.

was Vector sigma ever active in the timeline?

Yes, it was, but that was ages ago, unfortunately.

Oh well. Can we just assume that he found one of those hotspot things so I don’t have to rewrite it.

Yes, that’s what I was suggesting. It’s a very unique backstory and I’d hate have it completely scrapped. It just needed that one change.

I mean, is it alright for me to just leave it, and we all agree that it’s not canon.

Sorry if this sounds rude but I must ask, do you know how to edit a post?

It’s probably best if you just edit Juliana’s signup post to say that Craig took his car to a Hot Spot and worked to make the car a compatible vessel/body for the Spark and then installed it, bringing Juliana into the world.

It keeps the part about him working to make the car able to become a transformer while staying in the canon of the RP’s lore in terms of how Cybertronians are made/born.

I’m sure Chromeharpoon would be more than happy to help you iron out any details if you ask.