Treason-lord of the nightmare force

“Who will win, your team with two scientists, a boxor, two astronauts and yourself, or my team with a being of light, a bioformer assasin, a physcotic death machine, the greatest swordsman in the world and me the general of the kraeloui army” treason facing the x squad. 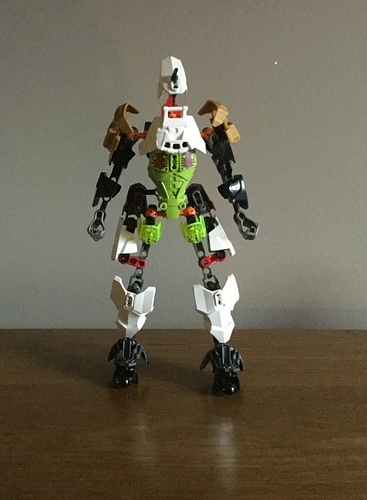 Now the leader of the main enemies of the x squad, treason isn’t super overpowered this time (if pyraxus is 100 treason is roughly 29) stronger than both titan and death rattle combined, this is what you’d normally expect from the main villain, powerful but not super overpowered,he has control over all six toa elements and is planning for universal domination, to do this though he needs the power of the four legendary weapons (basically ninjagos golden weapons but for bionicle) 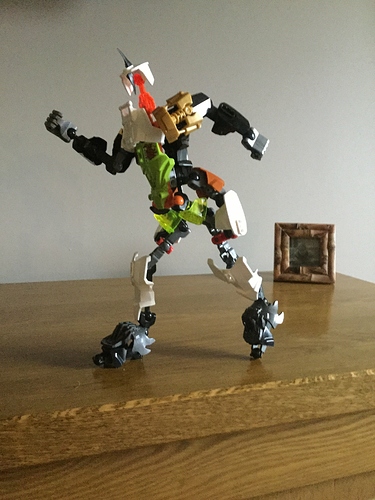 With all the powers of krana/ krana Kal, his hyperintelligance, his insane strength, his chaos enzide armour which practically unbreakable and the fact and I’m quoting him “titan is the only sane hero I know who isn’t afraid of me” it’s very clear he’s the bad guy and one of my best villains ever and he’s not going any time soon. 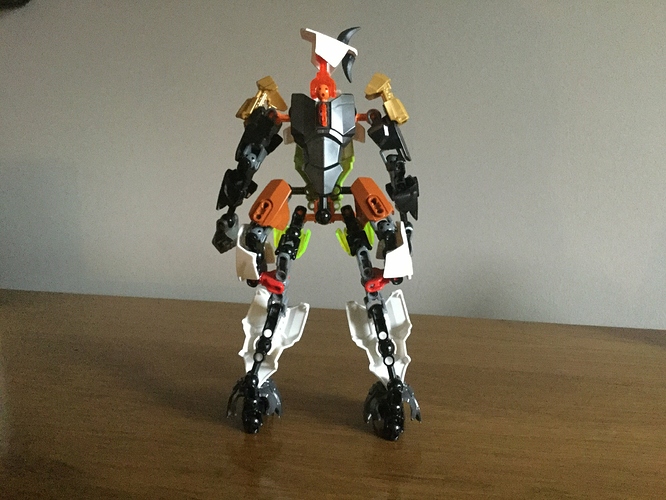 Unbreakable Armor? This character lacks armor on the leg section from a noticeable gap. (unless thats his only weak spot)

I see you made a character more balanced for your story, but at the end of the day, this moc is awkwardly proportionate…
The mix-mash of colors doesn’t blend, the extra limb connection is unnecessary, and the back leg is a no no-
With alittle more pieces, you can rearrange this moc into something better.

So from a basic technic figure to a basic ccds figure. It looks like you tried to make him interesting but it looks more like a rainbow mess with extra stuff on him becuase why not?

Off topic: I’d reccomend not challenging others or saying “my characters more powerful then your character”; it’s kinda pathetic / immature looking in this creative “community”. Just make characters without trying to compete with others on how much more evil or better you can make them. Only do it when you have a crossover / rp with others.

mhm
This MOC isa bit messy. If you tone down the color scheme to just a few colors it would looke better.

The limbs are what they are, but I’d scrap them for something less gappy. Standard limbs would work well, IMO. The torso is nice, but the sides could really use a little bit of coverage. And I would definitely eliminate some of the colors to make it more cohesive.

The MOC is messy and the color scheme isn’t working. The build by itself is cool, though the lower legs needs some work.

This one isn’t nearly as overpowered, so that’s neat. I’d recommend adding stuff to the lower legs to make them more proportional. Overall, the moc isn’t terrible, just work on the proportions, have a better color scheme, and I think this could work.

The spiky armour price is his head

So, is he a Cyclops?

He is a “kraelouiin” a species of religious, Royal, hyper intelligent and warrior like beings who can’t harm their superiors, and beside their King and queen treason is the most superior of the kraeloui meaning the x squad member trouble 2 who is kraelouiin can’t harm any of the nightmare force if he is around because he like all kraeloui follow their religion/ tradition quite strictly.