Tridahk was created by Kratune by making a form of antidermis that has the same mutating properties ofprotodermis. 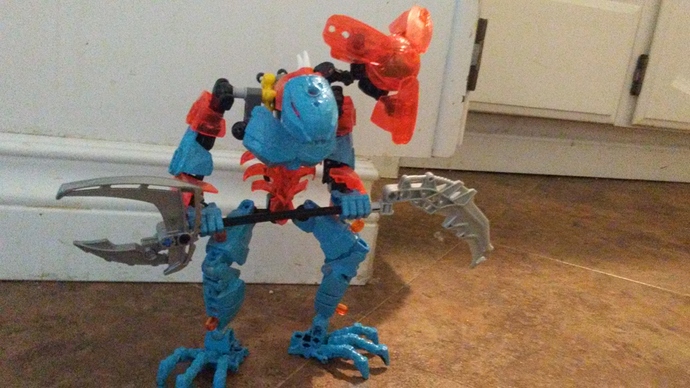 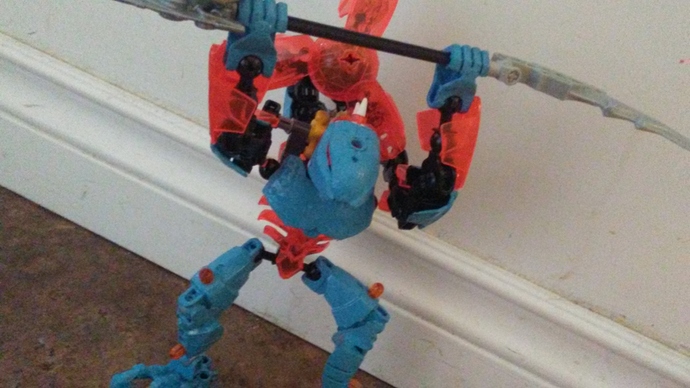 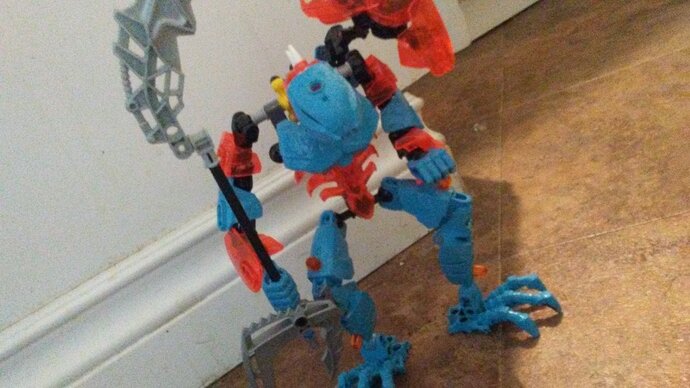 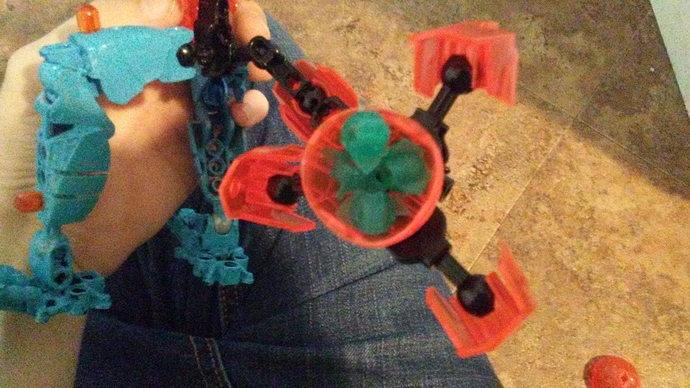 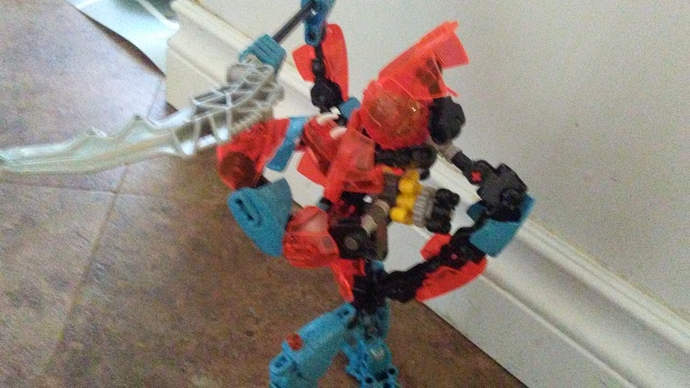 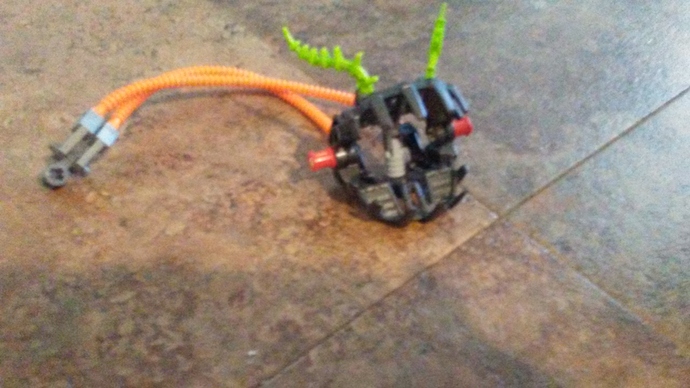 . Also, all pictures with raised arms are showing of its gear function. 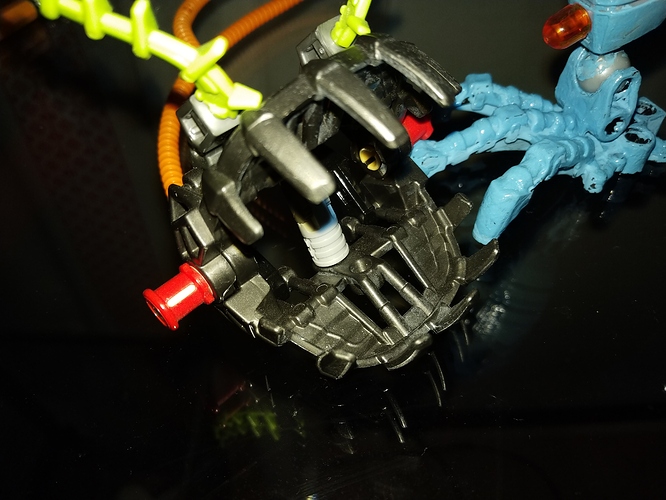 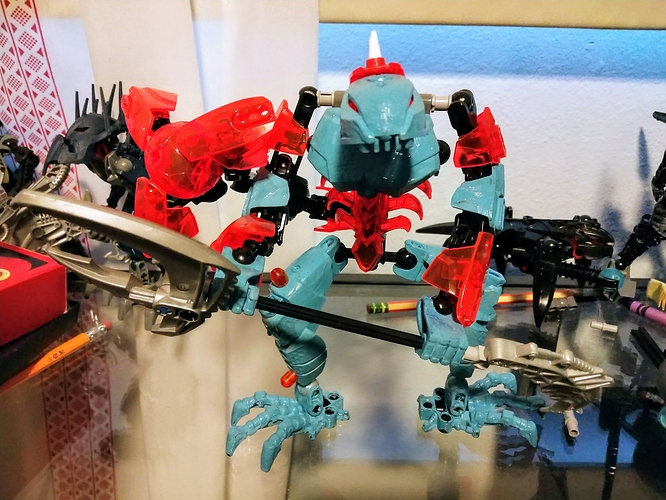 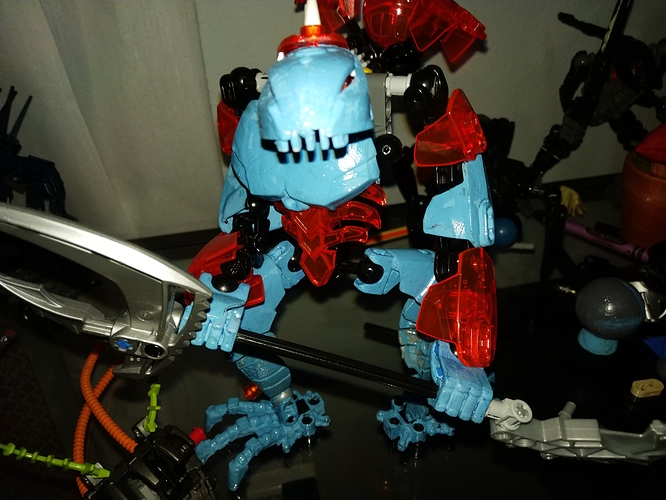 I don’t have enough story material to flesh this out, sooooooo, i’ll explain it in the first Rahkilla Army story. BYE!

More pics please, I like this from what I can see, I just want to see more!

Despite being simple, it’s charming. I like the Shadow Leech tail, and the painted parts look very nice.

The MoC looks interesting (and I agree that there should be more pictures), but the backstory and concept could use a little work.
Assuming that the Shadow Leeches somehow managed to avoid being nuked by Tahu’s Golden Armor, the Energized Protodermis reserves at the core of Spherus Magna dissipated into space during the events of The Shattering, so it’s no longer down there any more. Also, Rahkshi are normally made up of two Kraata; one dies and gets transformed into the suit, which the second then pilots. So if all four Leeches are stuffed in the Tridax Pod, then there wouldn’t be anything left to mutate into the body, nor control it. Something else to keep in mind is that they also tend to die off rather quickly when exposed to nearly any form of light, so on the off-chance that they’re actually in control of the creature, exiting their container would immediately be suicide.
Granted, alternate universes play by alternate rules, so one does need to be a little lenient when it comes to stuff like this, but since I don’t know how this one works, I can only offer up the canon as a comparative reference. Either way, though, I do hope the information provided can at least help develop this character a bit more.

SHUDDER BEFORE THE MIGHT OF MY BIONICLE KNOWLEDGE FOOLS

Said facts would’ve also been brought up if this character had been presented for approval over at Corpus Rahkshi.
I regret nothing.

I don’t think Tridahk is very fit for being in a school. He’s never seen the matoran universe before so it would be unreachable for him. Plus, the only rahkshi that I think is as intelligent as they say is Kraata-Kal. So personally, I don’t approve of Corpus Rahkshi. It also has many characters with, dual kraata (which is impossible) and many other things that bug me.

To be fair, that was actually meant to be viewed as an example of my reviewing process, since I’m currently one of the Co-GMs there, and I have to look over and provide input on potential character backstories all the time. Apologies for the confusion on that front.
Also, Kraata intelligence in canon actually increases when they level up; they can naturally vary anywhere between relying on raw instinct to being in constant mental communication with their Makuta and formulating traps and strategies, and Shadow Kraata are about on par with Matoran and Toa, and can even speak their language. So while Kraata-Kal is stated to have intelligence much higher than his average brethren, that’s not really much of a feat when you consider that, in terms of intellect and power, said average-leveled Kraata would only be around Stage 3 or 4.
The only major differences that we have in Corpus, due to the player-controlled Rahkshi all belonging to a new, recently discovered breed, is that of free will and enhanced self-awareness. Everything else, such as dual Kraata and the like, is pretty much just explained via mutation and/or deformities… which, in the case of the former, is also at least partially responsible for the changes in Kraata-Kal. So in essence, this was really only done to make them appear more humanoid and up their relatability as actual characters.

Well no matter what, I still appreciate your help. I was just saying that I don’t really want to join.

Cool! it looks somewhat like a CCBS version of a Rahkshi.

Thank you! I know the pictures are low quality, but in about two days they will be replaced!

and many other things that bug me.

Well no matter what, I still appreciate your help. I was just saying that I don’t really want to join.

And that’s perfectly fine. It was never my intention to imply that you should do something against your will in the first place.
Just spreading some ideas around the fanbase, is all. Everyone’s entitled to their own opinion on them.