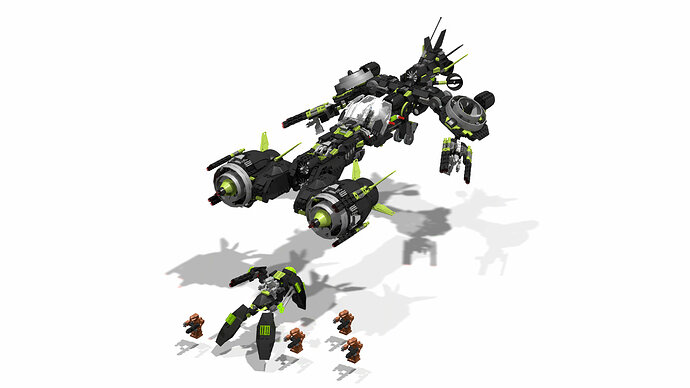 So after seeing @AwesomeJoel27’s Revamp Thunder Fury moc I wanted to do something with Exo Force so I decided to make the following moc(s). I redesigned the Sonic Phantom to be a dropship rather than an attack fighter as the stern thrusters being angled up did not suggest it being a fighter to me. Piece count: 1682. 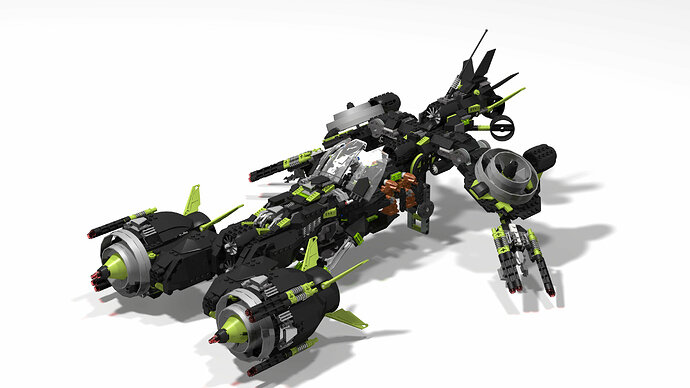 The Phantom carries 4 Iron Drones and a Mini Shadow Crawler which can be deployed from a height or by landing, it has 4 guns on the front (2 per engine) and a dual gunner turret set up like the original but with a devastator gunner. The set contains 7.5 Robots in total (The pilot devastator is attached to the Phantom). 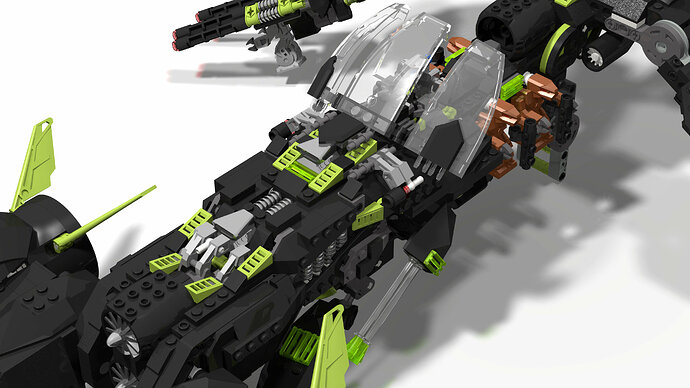 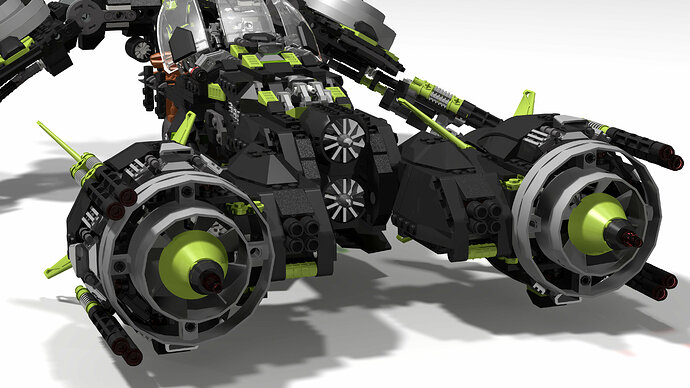 I tried to capture as much of the original moc in this but that original set only had 208 and 147 parts, so as I upscaled the design, the design needed more detail and the colours kinda became a bit bland. I added detail basically everywhere as a result of this and I think it looks alright. 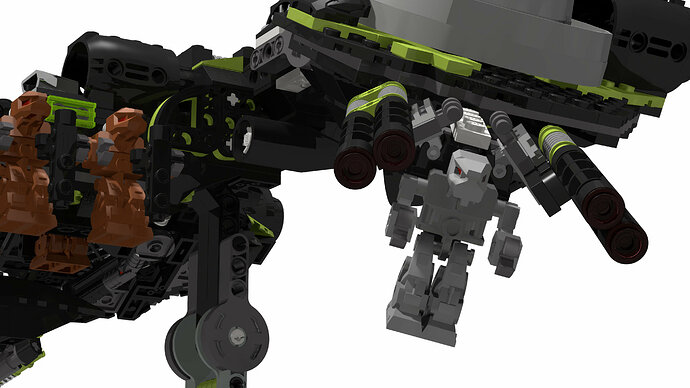 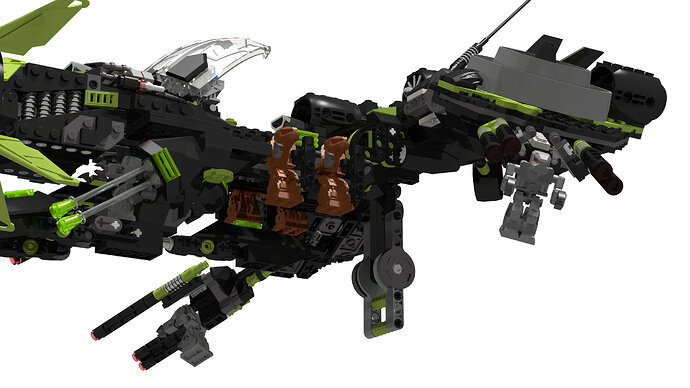 The thrusters might look weird but that’s only because Stud.io which I use now, does not support this part, which is a tad annoying. Originally I designed this in the LDD because It’s my preferred design software but after seeing a few people rendering using Stud.io I decided to try it. Long story short, I had to manually rebuild the moc in stud.io and Lo’ this moc. Also the Toa Metru leg armour isn’t on, I originally had that on the crawler but eh, not anymore. 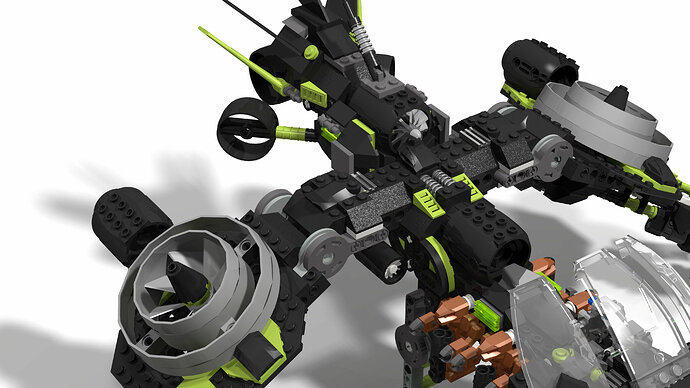 The crawler I decided to make smaller for the purpose of a dropship, the crawlers didn’t need to be large to take on our brave heroes in Exo Force hence the scaling. I replaced the sphere with the skeleton with the small ball thingy as I imagine it to be some kind of reactor rather than a prison pod. 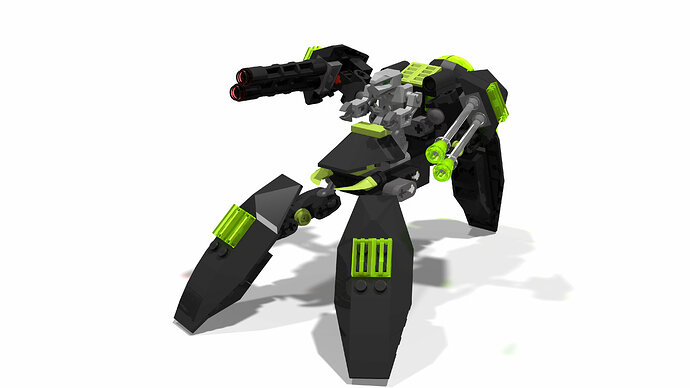 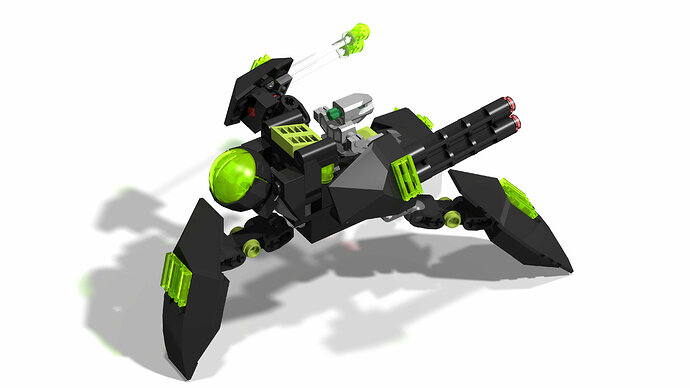 Yeah, those things were prison pods, the loss of these makes them easier to kill, the Exo-force don’t need to worry about hurting the human prisoners. However they’re small so much easier to deploy in numbers.

Overall I think this came out really well, I’m getting back into moccing now on Stud.io, the rendering is super high quality and I may end up actually making instructions for once. Crazy right! The instruction system on stud.io is a much better than LDD trust me, I built the exterior then the interior according to LDD…

Dang, Exp-Force is one of my favorite all time lego themes, so this is just preaching to the quire. I better hope on this train before everything is tackled.

Very well done, mate. I had this set… I think it even may have been my first Exo Force set… so this has a very special place in my heart. ^^

Shut up and take my money!

If only this was available for retail.

@Zero @Leoxander
I can look into trying to put the stud.io file online if you want.

I was thinking more about a physical set.

Is this really Lego Digital Designer? I cant get such good graphics no matter what I try.

There is a way in preferences, I had to Google it.

This was designed in LDD, remade manually in Stud.io (because the file wouldn’t render properly) then rendered in Pov-ray, Pov-ray can be used in LDD as well however.

@Zero The instructions or file are the closest I can get I’m afraid.

This thing is so amazing I would love to recreate it in person! Awesome Job!

The files are now available on the google drive as LDD and Stud.io files if you want to mess around with them or compile the parts list.

Edit: Link removed as the file has been removed. Apologies to anyone still wishing to download the model.

Hi, I love your creation, and I like to make a copy, but the files are not available when I open the link of google drive that you have written. Can you repost it, please?
Thank you so much, your creation are Incredibles!

I have since taken down the link, so the file is now unavailable.