This is the 10th version of my self M.O.C, Un’Jaguk. His backstory is that he was a matoran of metal who was exploring a cave to find elemental crystals to pay off a debt. He found those crystals, but ventured further and found the Kanohi Mask of Metal. Now a hardened warrior, he traveled across Xoriezeghia, and met Kovaan and Jhoirek, becoming the leader of the trio. 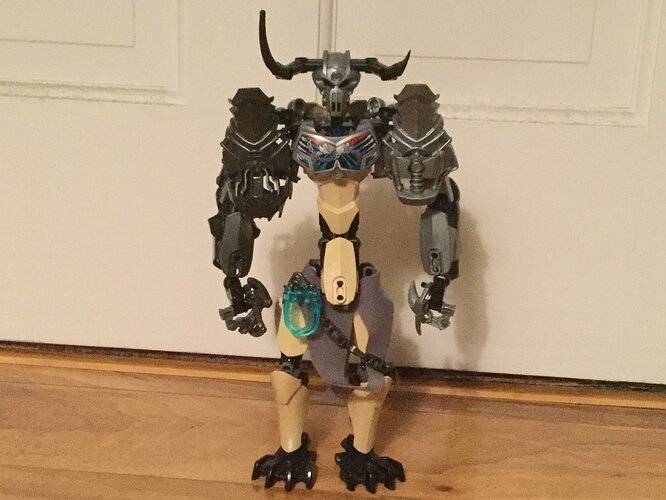 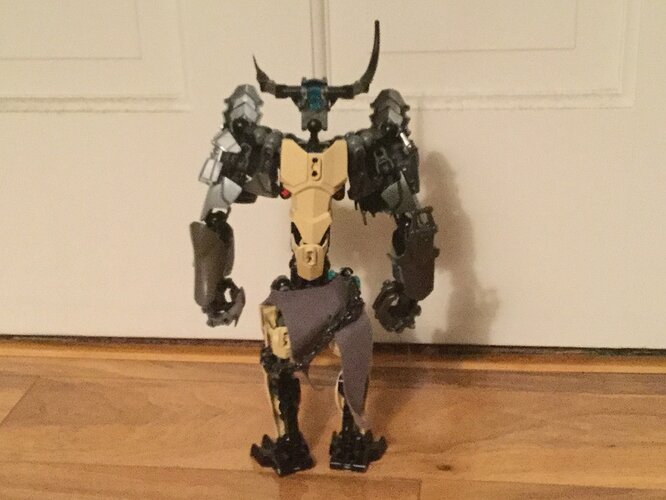 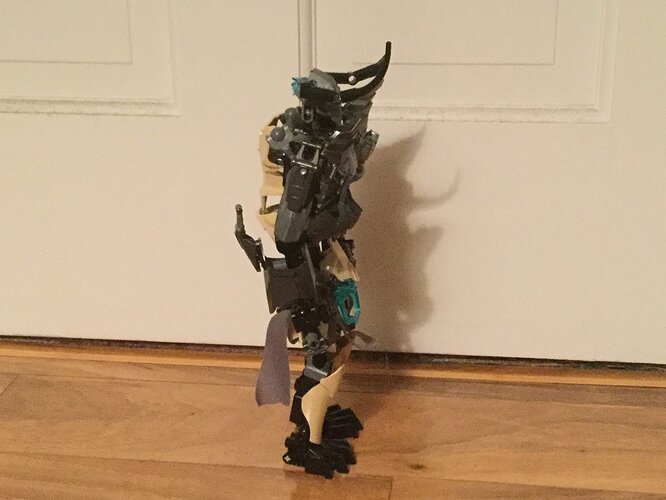 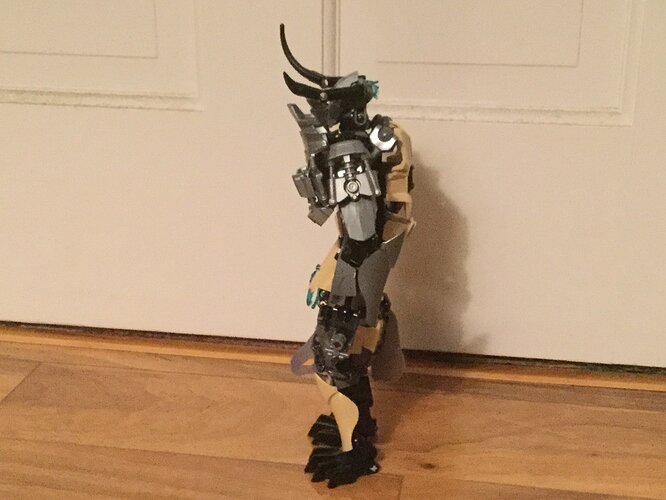 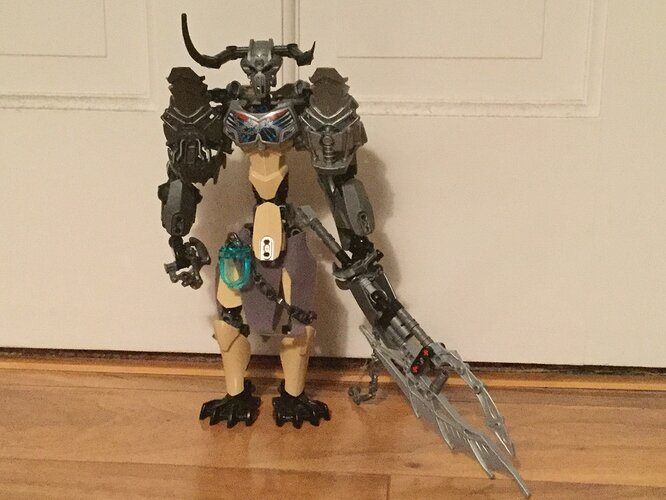 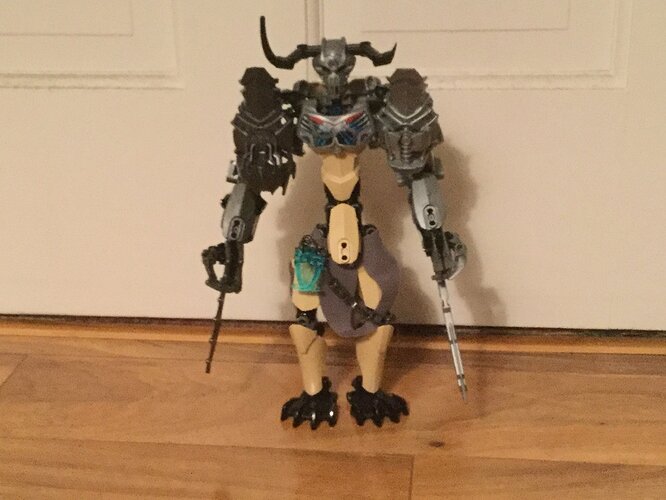 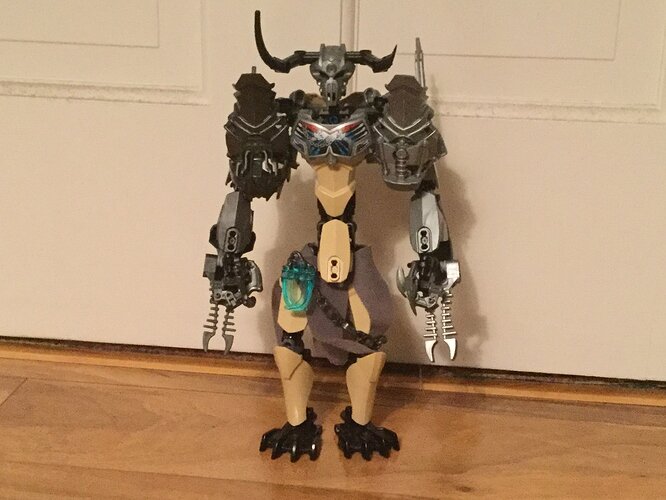 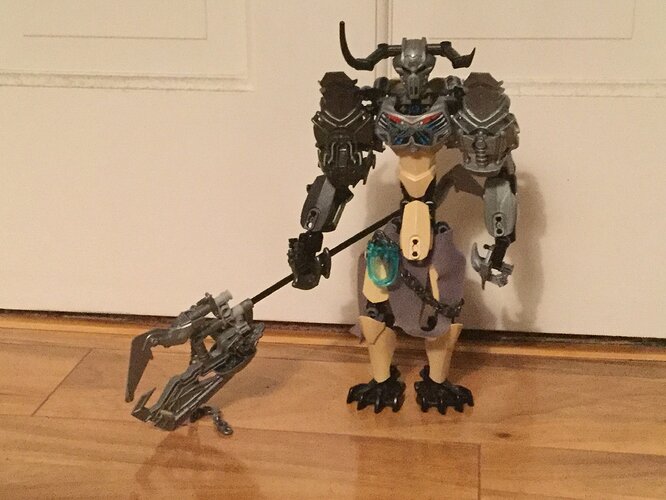 While this moc may be the best version… you need to fix those arms, those upper arms to be specific. They are way to bulky

The forward facing armor chest plates are way to cumbersome looking and stick out to much compared to the rest of the moc. And since the aren’t centered, they look even worse

They’re shoulder pads, and I’ll try to center them.

Agreed with SBM. Having forward facing armor on arms is generally something you’d avoid at all costs (I say this after being called out for it on multiple occasions). Aside from that, I’d suggest you make the torso maybe one or two bricks shorter.

Then there’s his colors - tan through the legs and lower torso, gunmetal grey in the right arm, and silver in the left arm, chestplate, and head. I think that’s a really cool concept that’ll help the character be recognizable. I would suggest you remove the silver chestplate and replace it with a tan one to make the blocking more solid.

Love the uneven horn thing he’s got going on, though I agree with all the above. Those shoulder pads need changing.

Oh, Un’Jaguk what happened to you. From a regular Toa build to a messy titan form.

OK, first of, the overall look is disturbed by a few things. The colour scheme is inconsistent: the guy has tan legs and torso. One of the arms is light grey and the other one is gun metal. The gun metal grey needs to be replaced, mainly because it is found exclusively in the arm. To continue, I would add more tan in the arms, especially in the upper arms. The other thing that is disturbing the view is the fact that those shoulder panels are just out of the place. They are sticking out too much frontwards, and are placed there in a pretty awkward way. I am pretty sure that those are interfering with the arm articulation. They are also too big. Like way too big. You don’t make a titan by just simply putting some big shoulder panels. They also brake the proportions. This version of Un’Jaguk suffers of what I call ‘The Axonn Syndrome’. Some parts of the moc (the arms and the shoulder panels) are way way WAY too big compared to the rest of the moc, just like Axonn’s hands and feet. As I said, the proportions are kinda killed, but not only by the arms, but by the legs too. They are too short, compared to the rest of the moc. Make them longer. And what is with the trans-blue and with the red?
The build is a pretty standard CCBS titan build. Nothing too special or too bad. As I said, I really dislike the way you attached those shoulder panels. I also dislike the hand design: the hands themselves are tiny, and he fingers are gigantic. And clawed. A Toa does not have claws, man.
And now the backstory. I can digest the fact that he was turned into a ‘Toa’ by a Mask instead of a Toa Crystal, but I can’t digest the fact that this build should be a Toa. This is a Titans. The Toa can be Titans, yes, but as far as I know, there are no Titan sized Toa. I may be wrong tho. Besides this, he does not have the usual characteristics of a Toa. He has claws, horns, a skull face, spikes armour, etc. He reminds me more of a villain than a Toa. And finally, the Element. Un’Jaguk should be a Toa of Metal, but Metal is not a cannon Element. Iron is. And the colours of Iron are orange and yellow. Yes, you can replace Iron with Metal and orange with tan, seeing that this is your universe, but I am the cannon fanboy of the site, so I had to bring this up.
Over all, I am not a fan of Un’Jaguk being a titan, especially seeing that he became one with not training or worthiness proven from the past actions whatsoever. 8/10.

It’s color blocking, and the gunmetal and silver are supposed to represent different types of metal

I like them, and they actually don’t interfere with articulation

You really can’t convince me, sorry.

You’re right, however I also lengthened the arms and legs and rebuilt the torso

The arms and torso were already fine.

The legs are still longer that the torso

Trans-blue appears in only two pieces. And the random red could be easily replaced.

I’m answering all the things about him looking like a villain with a question: does Batman look like a hero?

The story is retconned and thus his backstory has been wiped and changed, he is a hardened warrior.

This doesn’t really change the fact that the Toa are not often seen as Titans.

I’m not trying to “convince” you anything, it legitimately doesn’t hinder articulation

Looking at the pictures, I can clearly see that if you try to raise the arms at 90 degrees, they will interfere with the bones that are attaching the shoulder panels.

I wanted a solid rebuild, that’s why I changed them

Those were already pretty solid.

a print on a piece

Which you can change with another one. Plus, there are red pins in a lot of places.

Yes, IMO. It reminds me of Deadpool.

I can show you a picture of him with his arms out straight, it moves the shoulder pads but they look fine

I know, but I changed it to make a starker change for V10

Fair but you see my point right?

Kind of. Still, when I think of the New Un’Jaguk, I can’t think at him as at a Toa without context. 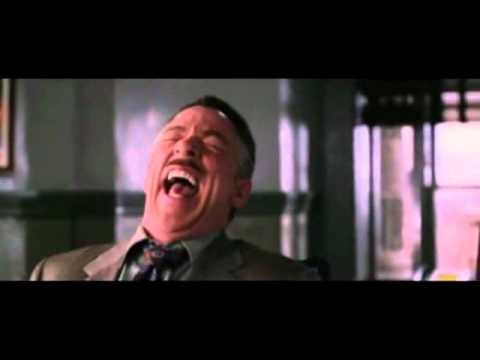 This entire discussion is priceless.

Sorry to say, but I don’t know how to understand from your reply.