I would love to draw this actually. But I’d remaster it a little more.

So I guess you could call this the fan-tom model?

You could say that about a lot of characters.

It would be awesome if such a thing could be done for every character, but that seems unlikely.

If nothing else, it might be fun to do once we get through the current round of contests. 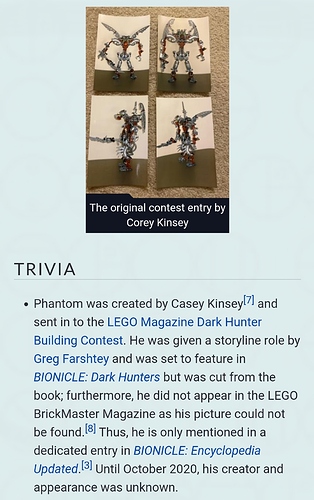 My dad has actually found the Dark Hunter essay!

“ This Dark Hunter will hunt anything when ordered to by the Mysterious Shadowed One. The Toa Hordika haven’t seen him yet because lately he has been hunting for Keetongu. Now his new assignment is to hunt down and destroy the Toa Hordika. This Dark Hunter is a lot taller than Nidhiki and Krekka, but there is a reason for that…. After each hunt, he will search the victim’s remains for anything worth taking. He will then, add those components to his body. Despite his appearance, he is not only very strong, but he is also very smart. Not only can he speak Matoran, but also by hunting Rahi and Rahaga, he can speak to Rahi. He doesn’t stalk his prey, but as soon as he sees it, he lets out a blood-curdling scream, and goes on a rampage.

This Dark Hunter has a radar/tracer atop his head. It cannot trace one that is sleeping, and it’s hard to trace one with armor, but it can be done. His glider wings run on concentrated Protodermis that works as fuel. It runs out after about two hundred miles. The spikes on his feet and thighs are used to climb ledges incase he can’t fly up there. All of the tubes along his back are strength-amplifying Protodermis tubes. They make him twice as strong. It only lasts ten minutes. He wields Metru-Nui’s largest sword dubbed “The Punisher”. He bares the Kanoka Disk of Slicing. It’s said to slice through anything. He has the Rhotuka Spinner of Venom, said to poison anyone with incurable venom in seconds! He also has a fiery breath. His large fangs have small compartments of venom much like the kind that the Visorak use.”

Also, I wonder how blood-curdling works in a world full of robots

This should probably go on BS01.

I know the other Dark Hunters don’t have their essays, but that’s probably just because they have been lost to time.

Fascinating insight into the evolution of the character.

For reference, here is the Encyclopedia entry:

A member of the DARK HUNTERS with one of the more bizarre origin stories. He was originally a humble crafter from an island far from METRU NUI where there were no Toa. His people felt the need for a hero, and so he was chosen for a “rebuilding project.” After numerous experiments, including exposure to an ENERGIZED PROTODERMIS variant, Phantom emerged with increased strength, the power of limited flight, dramatically improved eyesight, and the ability to turn invisible. His career as a hero was short-lived. Frightened and ashamed of what they had done, the locals shunned him. Disheartened and without purpose, he was easily recruited into the Dark Hunters. However, his conscience has so far made him of limited use on missions.

In the time since, it was decided that he was both a Matoran and a member of the Nynrah Ghosts.

In the time since, it was decided that he was both a Matoran and a member of the Nynrah Ghosts.

I think it’s pretty cool how fans had Greg canonize Phantom as a Fe-Matoran back when we had no idea what he looked like and then when he finally turns up he’s got a slight variation on standard Iron colors.

It seems that there were definite liberties taken on the story-side, which I am perfectly okay with. Personally, I think they had to nerf him a bit. But really, his canon story is way cooler.

They read very differently. Are you certain that they’re the same?

yeah, it’s almost like after being outcast from the society of iron matoran, his body began to rust, turning into that red color

I mean, unless there’s another Dark Hunter that was made for the contest and won (and there very well may be, I stopped keeping up with the lore shortly there-after) then it seems that this is the only explanation.

29 made it into the book. An additonal 3 were released through club magazines. That’s 32. There were 35 winners. That means it’s 1/3rd of a chance to be Phantom.

Phantom is the only one that we know was sent in, though.

Right - we don’t know if the other two were. That doesn’t mean they weren’t.

Situation like the rahi contest where at least 2 known models weren’t let in. They weren’t sent nor canonized. Two, the tunnel stalker and rock lion, were canonized but not sent in physically. As such, no book mentions, and rock lion creator never posted pics.

Phantom’s description fits with the canon one, and it takes a lot from Casey’s submission essay

Also, greg clearly describes how the creator of phantom attempted to send in the model but something went wrong, and that photos couldn’t be published for legal reasons, and were eventually destroyed.

Had casey’s model been one of the other 2 that weren’t canonized, I don’t think he would have to have sent the model in.

Here is the ABSOLUTE PROOF: The yari, a rahi non canon, but it still won the contest. Letter from greg didn’t mention sending in the model, yet casey had to send his rahi winning model in. Casey’s salamander won rahi contest, and he got a signed rahi book. The Yari’s winning submission letter only mentioned a free set, not a book nor a prompt to send the models in.

The thirty-five first place prices of the Dark Hunter contest was to be included in the book: 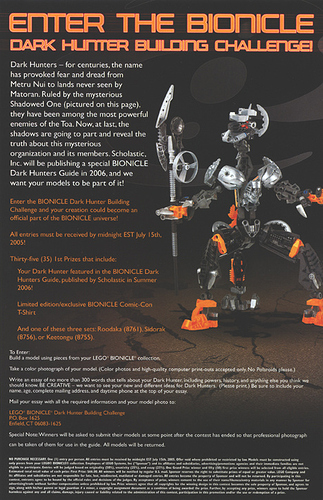 Yes the Yari and salamander letters are different, I believe the reason for this is rather simple - The Yari letter is annnouncing that it was one of the fifthy winners. The salamander one doesn’t do this at all - it only prompts to send the MOC in. It’s a second letter sent afterwards.

We don’t know the story of the other two Dark Hunters. Don’t assume we do just because we haven’t heard of them.

I don’t see how the essay matches what is described in the encyclopedia, it’s quite substantially different.

Edit: Oh, I thought the second paper was on the Dark Hunter. I see it’s different…

Has casey shown two letters in regard to the salamander?

Also, you’re forgetting how the phantom model had issues sending in the package, which Casey clearly describes happening with his.

Additionally, a number of the things in the essay can be compared to facts that greg has given about phantom over the year. We already know a lot of stuff was changed, so it makes sense only a few elements were kept the same.

Actually, considering that both the Yari and Furnace Salamander letter says they’re one of the 50 first place winners, as described in the magazine page: 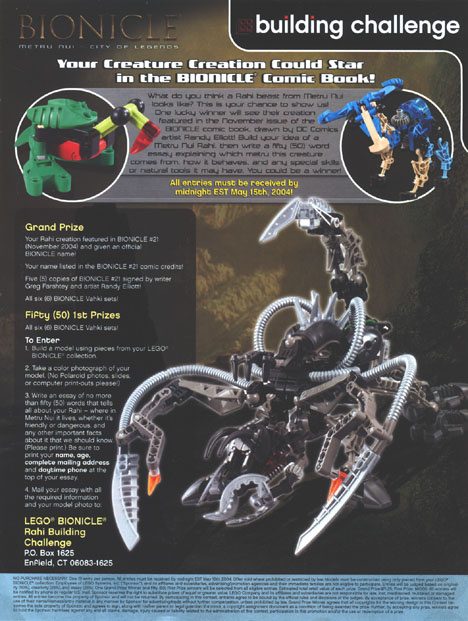