"They are strange. Alien. There is much we do not know - their names, their mission... only that this moon will claim them as it has all others."

Pasted image650x800 503 KB
Vera is a member of the enigmatic Rakala species. Unknown to the native Akonian species of the Drakus System, the Rakala operate in shadows and secrecy in a place the Akonians fear to set foot - the deserted moon of Necra Magna.

Pasted image516x800 379 KB
Once the most prosperous chronodermis mine in the Drakus System, the moon fell to wrack and ruin after a chain reaction was somehow triggered in the rocks of the moon's crust, destabilising the chronodermis and causing it to warp time.

Pasted image410x800 351 KB
The inhabitants of the moon were all afflicted with Time Sickness. Time Sickness warped their bodies and caused different areas of their bodies to fluctuate in age. This would cause great damage to those afflicted, only... that damage isn't constant. Sometimes it flips back. Sometimes parts of them are dead while others are young. In effect, they are both living and dead, and driven insane by the conflicting signals within their bodies.

Pasted image453x800 370 KB
Unable to fix the disaster, the Akonians quickly abandoned the moon, leaving behind a small tribe of survivors called The Immune who, while still affected, were able to retain their sanity. Apart from them and some other mysterious figures, the moon is abandoned and feared by the Akonians, making it a perfect staging ground for the Rakala's plans.

Pasted image477x800 354 KB
Quite what those plans are aren't known. Vera and her brother Voro arrived at a place called The Earthlord's Plateu with considerable firepower and shields to back them up. This takes the form of remote-controlled mechs, turrets, energy shields and other equipment they are able to manipulate using complex cybernetic claws grafted onto their arms.

Pasted image480x800 396 KB
As a species, the Rakala are fully biological, saurial beings with bright skin, large eyes, double-jointed legs, beaks and feather-like protrusions on their heads. The four antennae on their backs are able to sense environmental changes, and all Rakala boast at least some degree of control over Elemental Shadow.

Vera was made in early 2011 and is a character belonging to ShadowWingedHunter from a roleplay he and I used to be part of. She is Voro's sister. He made Voro, but not Vera, hence my making her.

This is Voro, an example of my Rakala race. He is wearing standard armor for colonists and explorers, minus the four-six sensory spines on the back. His coloration is fairly common, though they com...

Pasted image443x800 426 KB
Vera quickly became one of my largest and most complicated MOCs to date, more or less on her own. Unlike with most of my MOCs, I didn't set out with a clear goal in mind when making her. Just started with the foot design (which was really meant for a VERY different character) and it just grew from there.

Since the character wears a space suit, I had to make sure not to leave any holes where I might have otherwise gotten away with it. This made her very heavy, though surprisingly still able to balance and pose just fine.

There is also a piece missing - that's why there's a random pin on her right elbow. Should be a black vahki foot attached there, but for whatever reason it wasn't attached during the photo shoot.

Aware the waist is thin, too. Given the MOC's a biological one, that's even less excusable. Since the photoshoot I did stick some tyres around there.

Very creepy. There's not a thing about this that I don't love. Great job!

I love the asymmetric arms, very well pulled off.

Ghar is happy about that...

First thing I thought of when I saw the top picture: 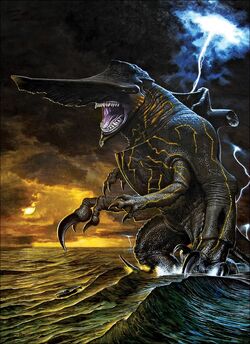 whoa. this looks incredibly awesome! the asymetric arms are my favorite part! (as well as the color scheme)

I got to admit this looks great!
Great color scheme.