To be clear, Hukara, Bane of the Dunes has been heavily analyzed and discussed by both fans and detractors in the last several hours since its official unveiling. In order to give a boost to the popularity of the project, I’ve received permission from the fantastic heads of the team behind Bionicle Legacy. Bear in mind that while this isn’t an official LEGO set, it is not in any way a creation of mine as I am simply the reviewer. If you are a moderator, please move this topic if it is improperly categorized.

After getting all that jargon out of the way, Hukara is tired of waiting and is excited to take the limelight. 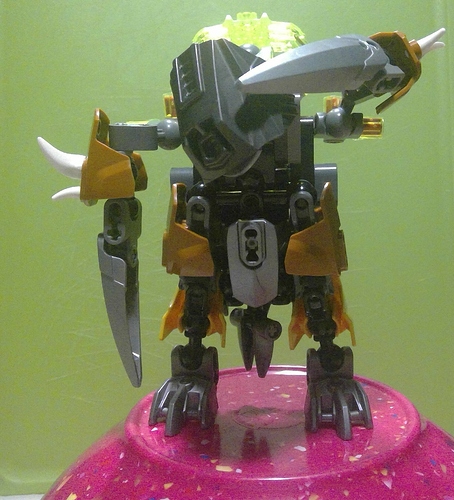 Yes, Hukara. You are gorgeous.

The first thing that jumps out to me about Hukara is that it’s detailed in an insane way. The amount of greebling on this guy would be pretty minor if it were a system set, but the jagged spines of the pin add-ons on the legs and the bohrok eyes really create a nice aesthetic that complements the “desert monster” feel. 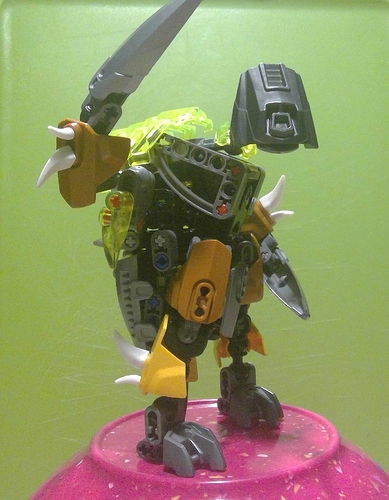 The thing is, the following angle is very close to the angle at which the BLP folks advertise this set at, and honestly, it’s pretty much it’s worst angle. I can definitely understand what the designers were going for; they wanted to show it in a dynamic pose that highlighted the head and the shell, but the final frame looks a lot like a thrown-together stack of parts. 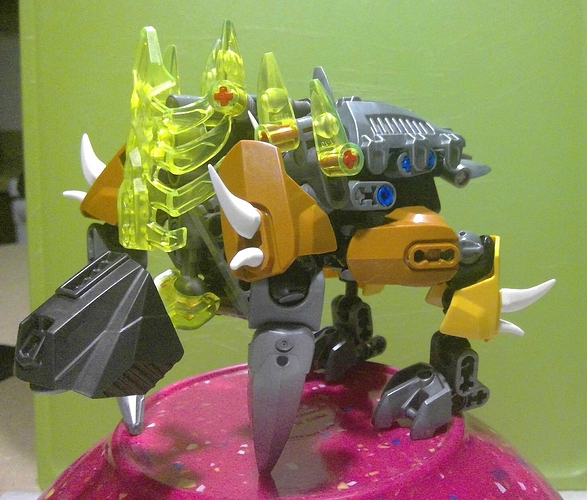 This shot right here really accentuates the squat, turtle-like nature of the set, which is justified considering the intention to represent a shelled reptile.

As a note, the use of this pin-addon as the face of the creature doesn’t really work; several smaller pieces would have likely worked better here. At a total of 136 pieces, Hukara could stand to make use of a couple more to add to the realism of the creature. 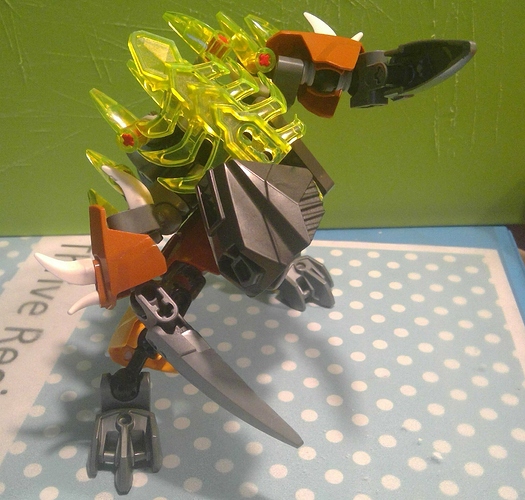 Hukara makes use of a bulky but effective custom gearbox, which fits smoothly into the aesthetics of the set as a whole.

That, my friends, concludes my review of “Hukara, Bane of the Dunes”! Please enjoy.

Hi, as the main set designer in the Bionicle Legacy project, I’m really excited for a review, especially by the fact that someone else builds our creations. I didn’t tell you that before because you just built Zelkriph when I went on a trip and was disconnected from the world… anyway.
When you said “it’s worst angle”, you were right, I didn’t expect people to not recognize the tortoise appearance and I was like “You can’t deny is a tortoise once you built it”, but I can tell is just a matter of take a picture of the side view, like you did.
About the spikes, I can see your point and as a fun fact I proposed the set to have the title of “Crowned tortoise” but that was quickly discarded.
For the second patch (after the changes to the generals) we will release some stickers and for Hukara this means eyes, which I think will improve the head.
For the rest, we really appreciate your review and feedback and we thank you for helping with the Wiki, I will add something there from time to time

Hey, it’s awesome to hear your feedback on my, well, feedback. I hope that I didn’t come across as too harsh on the “pretty much the worst angle” comment; in fact, I was trying to highlight how phenomenal the actual result was. Overall, I think that the set was super well designed, and I hope that that sentiment came through in the review.

I really enjoyed reading this review. Thanks for doing it