@Rockho, I might've been a bit too harsh saying the videos are 'shoddy' (the editing and the soundtrack are quite spot-on, I'm not too fond of the Microsoft Sam 'voice acting', though) but I just don't think the videos made by waving your sets around (this is a hyperbole) in front of a camera are a good idea...

The Good Guy meme is dead. Not that it was particularly funny to begin with.

Technically, if it's an unpopular opinion, then it isn't dead.
Not to mention I actually like Good Guy 06

goes for the Good Guy, which is an inherently unfunny meme originating from crude, shoddily done videos (I like

Perhaps the method used is not the most sophisticated, but the way it's done is entertaining, and the storyline more than makes up for it, on every level. I wouldn't call Reviving Bionicle crudely done under any circumstance.

I think CCBS protagonist sets should've stayed smaller, at the impulse-buy price point, instead of slowly getting taller.

My thoughts exactly. To me, there's something charming about a smaller good guy set. Plus, it would've allowed the designers to make far more imposing villain sets for G2. Not only that, but it wouldn't be such a pain in my wallet.

When did they do that. I never saw that.

The 'Spooky Scary Skeletons' meme is at least a bit justified - we had never had any skeleton-like villains in Bionicle before. The Good Guy, on the other hand, is just about arbitrarily choosing a random polybag and turning it into a meme for no particular reason.

The Good Guy, on the other hand, is just about arbitrarily choosing a random polybag and turning it into a meme for no particular reason.

I'd argue that it's a joke making fun of the fact that it exists at all; generally speaking, the Good/Bad guys aren't the highest of quality, especially the earlier ones. Overall, it falls into a category of "So bad it's good" jokes, which admittedly, not everyone finds funny.

Also to note: to my knowledge, Good Guy jokes existed before Reviving Bionicle had anything to do with it. RB just boosted it back into mainstream.

Also also, if you guys want to discuss the series further, head on over to the Reviving Bionicle topic:

A series made by SuddenlyOranges This is literally the best thing on Biotube. The First Episode: A link to the playlist: here Just thought I'd share this since the series doesn't get nearly as much attention as it deserves.

I got another one to add to my list:

I unironically like Good Guy and Bad Guy from 2008, and i legit think that they'd be great impulse buy sets.

I'd argue that it's a joke making fun of the fact that it exists at all; generally speaking, the Good/Bad guys aren't the highest of quality, especially the earlier ones. Overall, it falls into a category of "So bad it's good" jokes, which admittedly, not everyone finds funny.

The things is that I love unintentional humor and I ironically enjoy many bad movies, books and even fan works. In this case, however, I just don't understand what makes this particular Good Guy set stand out from many other not-so-well built Bionicle polybags.

My list of unpopular opinions is getting bigger...
- I enjoy the Kardatoran and the Agori in the 'guilty pleasure' sort of way. The Stars can go to Karzahni, though.
- I think Karzahni isn't a bad set. If he was some Rahi or a new character, people wouldn't bash this figure as much as they do. What's even more unpopular, I believe the set at least looks lika a Bionicle character, as opposed to... this.

I just don't understand what makes this particular Good Guy set stand out from many other not-so-well built Bionicle polybags.

Because someone on the internet said one day "hey I'm going to make a meme about this" and then it became popular.

In this case, however, I just don't understand what makes this particular Good Guy set stand out from many other not-so-well built Bionicle polybags. 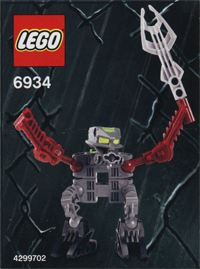 The way I see it, this particular Good Guy represents the entire community of bad polybags. It's not particularly terrible, but it's easier to recreate than, say, Quick Good Guy or Good Guy '07. As more people build and revamp the set, the more popular it becomes, and thus it becomes a meme.

I really like that Good Guy, tbh. That's probably because of RB, though.

I used similar build for my Matoran MOCs when I was a kid, as a way to replicate the rectangular bodies of the 2001 Tohunga.

I do not think that the Hero Factory Brain Attack sets were that bad. In fact, I think they look a lot better than the BIONICLE summer 2016 beasts.

I think G2 is slightly overrated. It isn't necessarily bad, just not that outstanding like some people seem to make it out to be.

Hero Factory is underrated and not as bad as people make it out to be just because it filled in for BIONICLE after it was cancelled.

The Beasts are some of the most overrated constraction sets of all time and are just mediocre at best and... crude and unfinished looking at worst. People praise them for their unique functions which, again, aren't even that great and are pretty meh in person.
I feel as though people only like the Beasts because they have functions and the BIONICLE name slapped on them and if they were Hero Factory sets without functions people would despise them.

I hate G1 fanboys. Now I'm not talking about people who say that G1 is superior to G2 or just simply don't like the sets, I'm talking about the people who scoffed at G2 say that it was just Hero Factory with a new name. People who say that the only reason people like us like Bionicle G2 is because we are blinded by nostalgia for the line or brainwashed by TTV and that they are right for disliking the sets. They keep arguing to people who liked the sets saying thinking that what they're saying is fact and insulting people who dare argue with them.

And by hate them I don't mean I am mildly annoyed by them, no I hate them with the rage of a thousand suns.

.
I'm disappointed with all three of them too.

I think I know who you are refering to...

Do you want specific people?

Do you want specific people?

i think we can tell