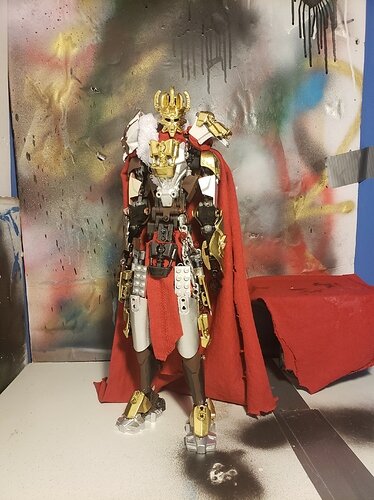 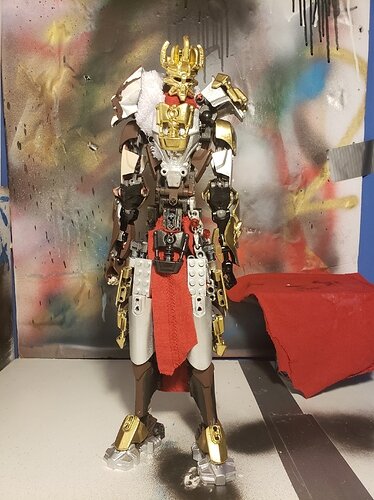 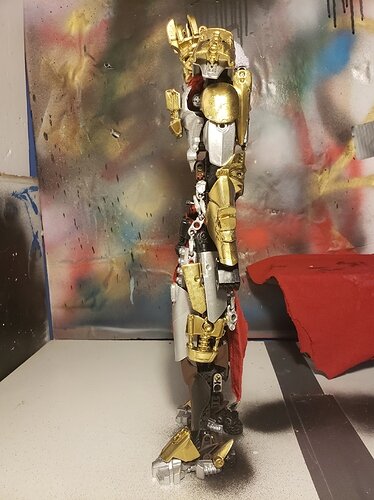 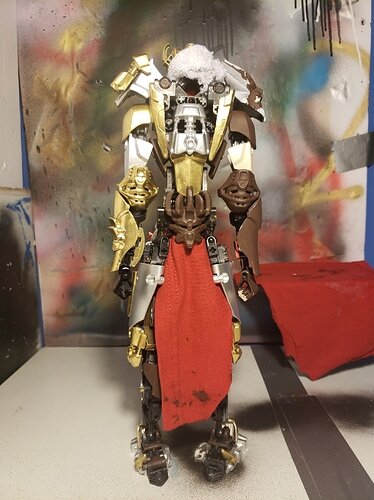 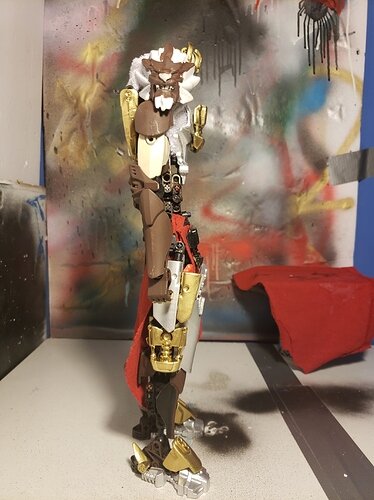 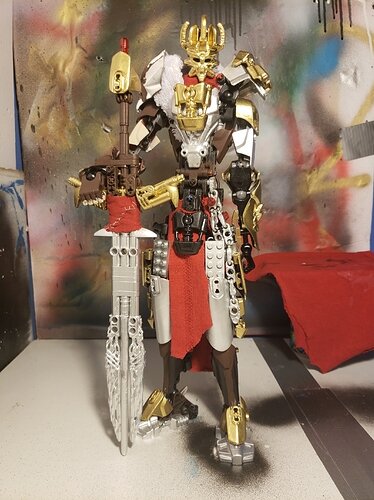 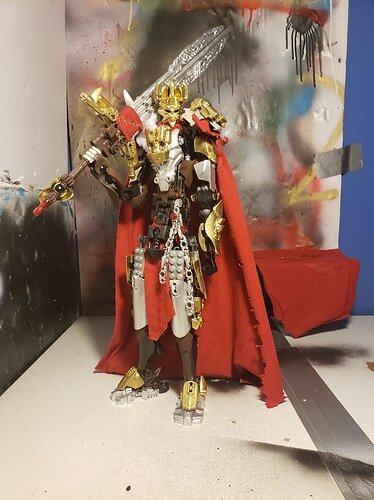 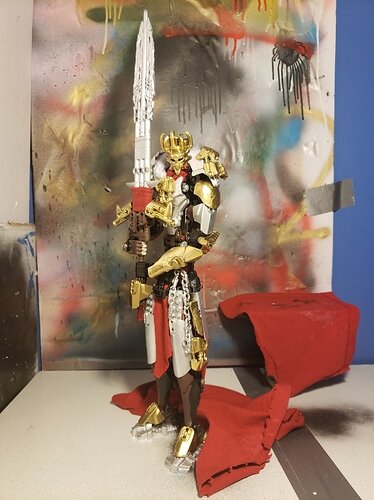 So no need to really go to far into his back story really short version is that he lived with his family fought till he was about 40 then died and came back looking 20 years younger now before he had only make and control ce but now he has the ability to make and control fire and ice both he mostly uses fire.

As for why well its cuz he in my story has become one of the seven deadly sins after he finds out about the death of his wife how she died was a mystery for a while but it was revealed that she was murdered by a group of mercenarys this triggered his rage to go out of control and awaken his new powers.

The helmet is a new addition originally I never wanted to give him a helmet but I looked at the ekimu mask and put it on him and thought this looks very pleasing for some reason so I decided to make a separate head for it its called the helm of creation in my story and like the mask of creation is can create anything kai uses it to make hundreds of thousands of swords that he can control telekinetically and brutally slaughter his enemies.

That torso is waaaaaaaay too long , the hands have too much flexibility,Really awkward, but the sword is cool though

Its the angle your seeing it from 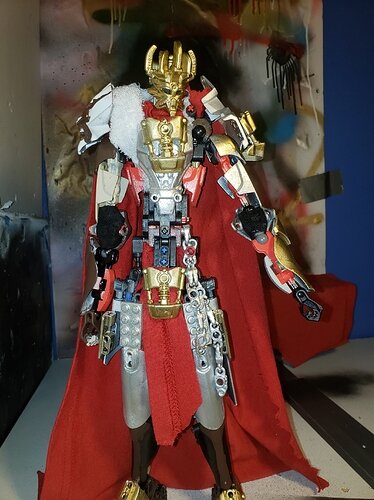 K so its not a sword gun thing that’s first it’s a sword there’s not aspect of a gun in there he doesn use it as a gun the entire thing is a sword idk where you see a gun I’m there but ok.

secondly the arms are designed that way for the elbow padding are the arms long not really they reach to his thighs are the legs long yeah but last I checked some people have long legs arms and torsos when their taller then the average person not complaining about your opinion I can obviously fix this.

third there is an entire story when he was resurrected he made his new body to be in its prime so he had nothing holding him back now as to why he uses for sis because that is part of his new set of abilities he gained from the place he spent most his time being dead in a place callsd the astral realm this is essemtly a place where the dead can go but also the living can find themselves there if they seek out the means to do so as for why fire is because its not earthbound fire its actually astral fire which is green the reason he has both is because the ice ability is naturally a part of him while the first was given.

Fifth so you say a claymore a sword a normal weapon used literally know real life a weapon that can be found in a museum and any history book known to man if you like I can produce an image of many real claymores and other swords for you.

Seventh so the mistake you made is that he unlocked it after his wife’s death technically he has always had it just never bothered to use it and before it wasn’t as strong his anger is what fuels the fire in his soul. And lastly the colors are a lot better to look at them just black and white so there

just for you buddy I looked up some claymores/zewihanders 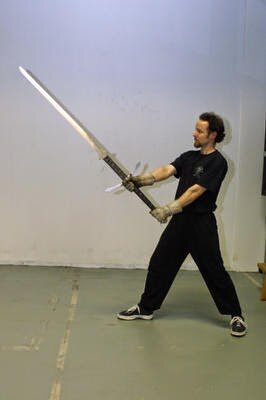 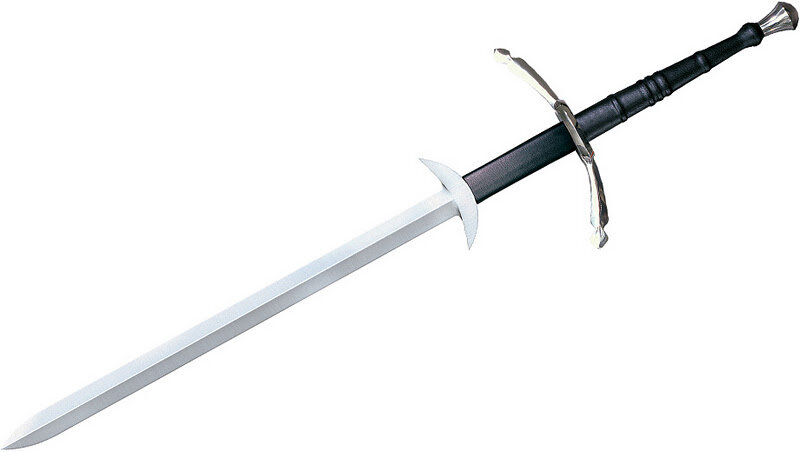 I mean, personally for myself, when viewing your characters I just look at them from an anime-esque design view, and I have to say, their backstories included, it really fits the perception!

To me this guy (the top one) actually works quite well, his armour coloration isn’t too awkward, a mix of silvers, blacks, and a touch of red to go with the cape, and some a few little gold adornments here and there just to add a bit of ‘pop’ to it.

The torso to limb length match up despite their slightly exaggerate length, the neck isn’t that emphasized, and allows fr some pretty nice head movement with the cape, while the cape itself, and the armor pieces give the feel of a kind of high necked cloak or such, standard anime/manga character fare really.
Especially when you take into account the limbs, and torso size.

Where such thin limbs for such a height would generally come off as lanky, when compared to his torso size makes them seem average sized or so instead. It also fits in with the foot and it’s slightly elevated/pointed look to it, which really does lead into the leg quite well!

Well again its not a gun again pictures of swords 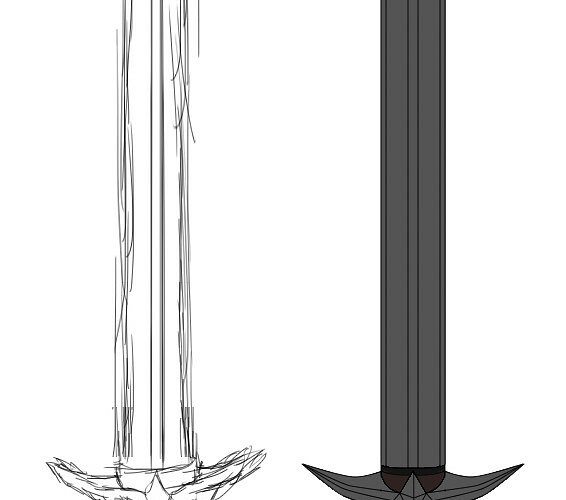 Ey, you’re welcome mate! I have to say I’ve really loved your mocs so far! Complex, essentially titan sized, and nicely proportioned (for their anime-esque builds that is of course ;P).

Also, ey, nice! Sounds like it’ll be an update to watch for!

Cloth in the bones of the moc?

Those are red to represent under clothing like a gambeson

You should have used the same shade of red.

The trans red totally steal the show and looks like it is part of the armor, rather than the clothing.

No. There are numerous trans red pieces in the moc. 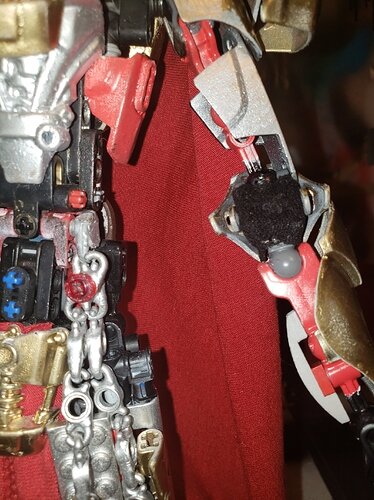 No, no there isn’t. There’s like one on the chain piece, a stud and that’s it. Otherwise it’s just a bunch of solid red plates/bones.