Valerian and the City of a Thousand Planets

I’m surprised this didn’t have a topic already

Valerian and the City of a Thousand Planets is an upcoming movie. That’s it.
I saw the trailer, and it looks amazing. Here’s the trailer for those who have not seen it:
https://www.youtube.com/watch?v=BszXhUjJz00
What are your thoughts? Like it? Dislike it?

I’m getting a very Guardians of the Galaxy vibe from this movie.

I saw the trailer, and it looks amazing

The keyword here is “looks”. I see nothing that pulls me in and makes me interested in anything that’s presented. But maybe the trailer isn’t entirely accurate. I doubt it, but we’ll see.

Well this has gotten 0 interest from me. What’s supposed to be amazing about it? Not really selling anything to me.

Honestly, I forgot the plot.
Probably some generic Sci-Fi.

The official synopsis:
In the 28th century, special operatives Valerian (Dane DeHaan) and Laureline (Cara Delevingne) maintain order throughout the universe for the government of the human territories. Under orders from their commander (Clive Owen), the duo embark on a mission to Alpha, an intergalactic city where diverse species share their technology and resources for the betterment of all. The ever-expanding metropolis is also home to sinister forces that jeopardize the future of mankind.

Doesn’t sound TOO generic. I like the idea of a planet solely focused on sharing ideas and technology. Never really seen a sci-fi where the universe actually sorta works together. But I am a littleness upset to see the human space government idea again.

This sounds amazing. And I happen to have read the graphic novel which this film is based on. It should be great once it’s in theaters.

I’m pretty hyped for this, hopefully it can be the first good adaptation of a European comic.

Unfortunately, I’m 90% sure the reason it’s impossible to tell anything about the plot from the trailer…is because there is none.

Cool trailer, although an alternate title could possibly be Guardians of Mass Effect: The Phantom Menace or something. /s

Someone needs to make a TTV Parody of this now.

“Varderan and the City of a Thousand Planets” 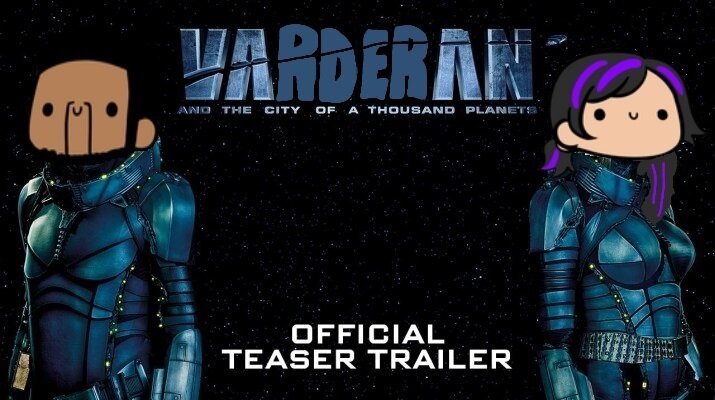 Someone needs to make a TTV Parody of this now.

Went and did it myself. It’s not the best, but it’s passable.

I honestly have no clue what to make of this. It looks like it could be interesting, but there’s nothing that says it won’t be pretty ‘meh.’

I’m pretty excited for this movie, if only because it’s made by Luc Besson, who also directed The Fifth Element, which is one of the best sci-fi movies ever. As for the trailer, I thought it was pretty good. There was enough to hint at the movie being imaginative and humorous without giving anything away.

The Fifth Element, which is one of the best sci-fi movies ever.

Now that I think of it… this DOES seem to have that Fifth Element vibe… Certainly feels like it.