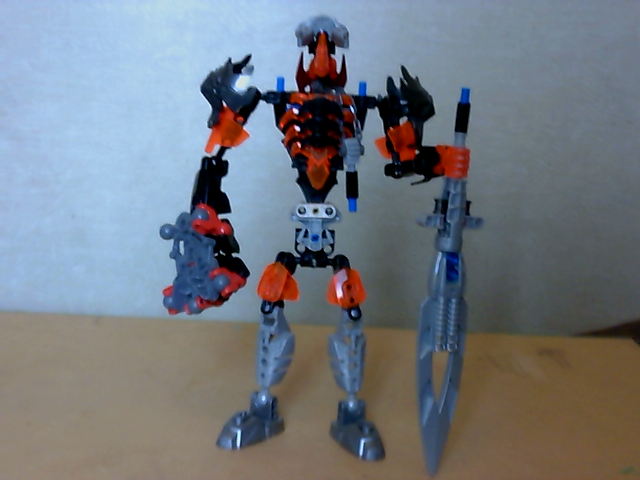 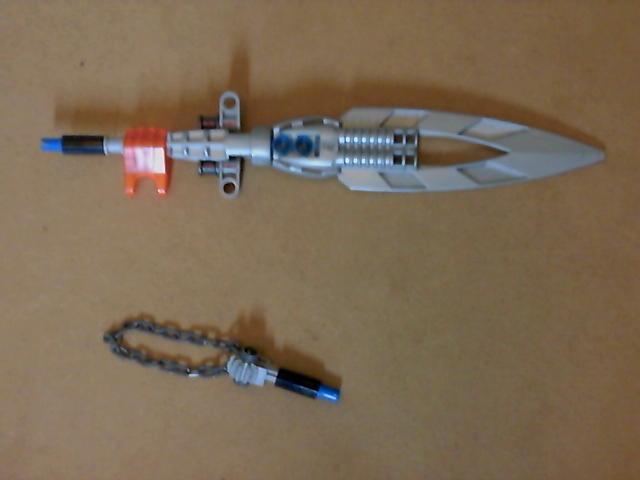 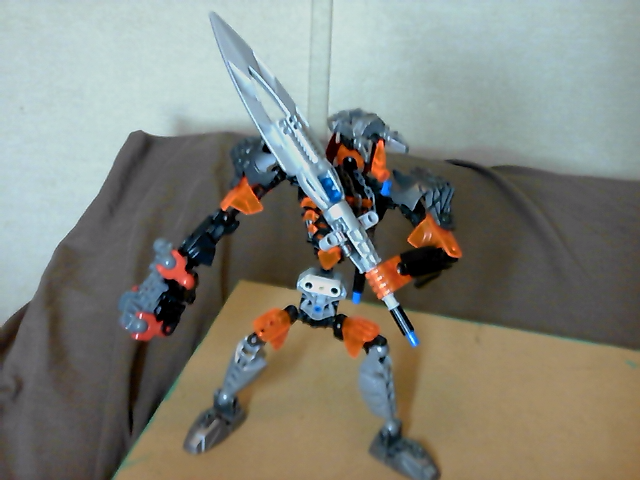 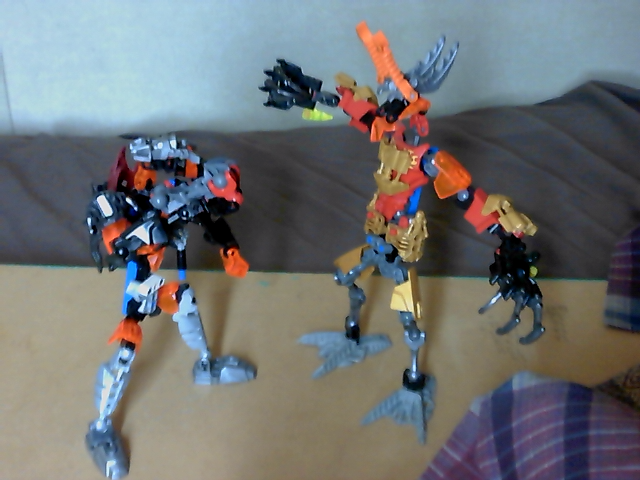 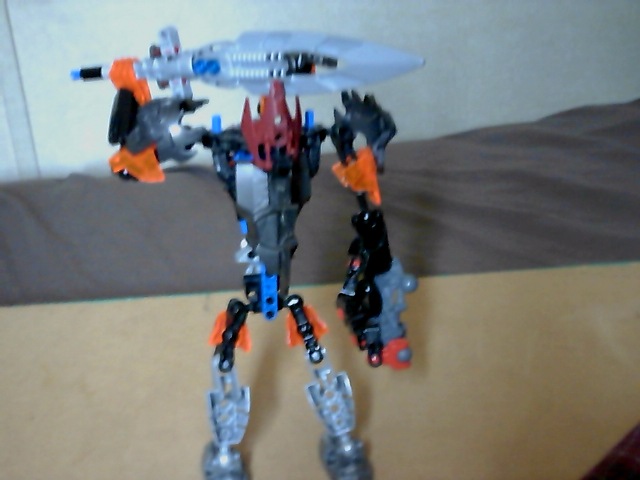 This is Veron Sither,the current champion of light in my universe of legacym, he dosnt look like he is a light champion but he is, his destiny however was hard on him, making him into what he is, since i dont really want to go into detail about his story,y’all can ask some things in the comments. Also my story does not go along with the true bionicle story, its my own.

I have decided to do some story fact posting from my own story, i will do ten of these facts for a character in my story, weather the fact is major or interesting. Today i will do my Self-MOC, Veron Sither!(the guy in the pic).
#1: Veron was originally Right-Handed before his mutations, after them due to his claw having blunted points and weird angles he had to switch to his Left-Hand, Hence why he swings his sword this way.
#2: If you saw Veron in a more humanoid form, you would notice on his claw is strange markings. These markings are actually Antheric letters spelling out on his arm the word “Devil”.
#3: Veron’s very first love interest was a blood red haired lady that was a mute sniper(a really good sniper at that) who went under the code name angel. Veron however sadly was unable to tell her his feelings, she was marked as MIA by the team, but she is still presumed dead. Veron vowed on this day to become the best warrior.
#4: Veron’s favorite alcoholic beverage, a Breker Ale, comes from the isle of Breker within the Bakari isles. The drink is considered to be the most potent is amount of alcohol, the strongest in all of Anthrum, its so potent that it can only be drank in shots, a single miss drink if your human can cause you to end up in the ER with alcohol poisoning. Due to Veron’s high tolerance to Alcohol however, the Breker Ale does literally nothing to him, he can drink this down like water if he wants to.
#5: Veron is one of the few spliced Lilaryans that has a Nero that infused into his soul, this is called Physical infusion and allows a lot of control in the body.
#6: Veron’s trusty blade, Legion bane, has an interesting story. As veron fought in the Groykuda shadow wars, during the battle of iron grotto, Veron had been battling a Groykuda rambler with is shotgun, however he ran out of ammunition mid fight and was backed into a corner. Veron spotted the armored spinal piece of a Groykudan elite and picked it off the corpse, at the same time he slammed the large armor piece into the beast’s face. As it hollered in pain, Veron drove the sharp part into its face, hitting its brain and killing it. Veron then took a broken sniper rifle barrel from the elite pile and combined his tactcal rope with the sharpened spine piece and barrel, thus the prototype Legion bane was born into action, through the years it has been changed to be more refined.
#7: Of all of Veron’s enemies, Hyde and Kronazus are the only two that knew him as a freind and a “traitor”, however only Hyde was the one that died.
#8: Before mutations, Veron was supposed to have silver hair like his father and green eyes, however the mutation transformed the color of his hair to black and flushed his eyes to an orange color.
#9:Veron is the first Demon and/or demon-like being to become a champion of Light.
#10: On the eve of his entire teams deaths(excluding Phota and Rotis due to them being alive), Veron goes to the cemetery they where buried in, visiting on every day of a death from his team in the Shadow Order. 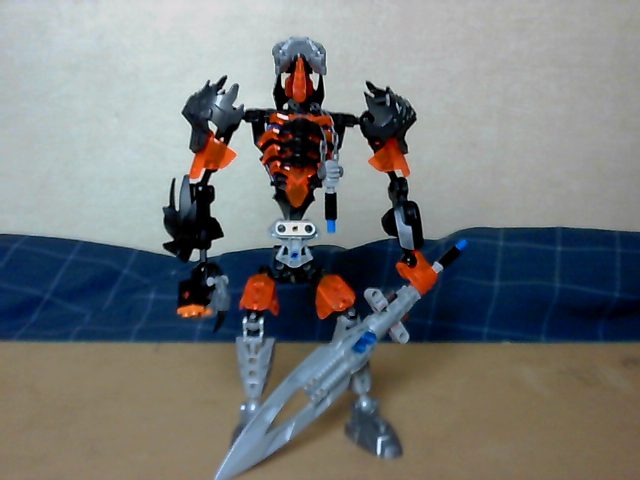 The torso gets pretty skinny near the middle, and there are a bit too many colors currently. try sticking to 1 main color, an accent, and maybe a base color.

the torso was supposed to be skinny around this concept but yes, it needs work,and at the same time i want to work with black, silver, and trans orange, the color of the armored pieces. The only reason i have blue is because i dont have black or silver pieces like that in my inventory,also am going to replace the back dark red piece with a silver piece if need bemor might get a tan piece i have and paint it black if i dont have silver. But thanks for the feedback.

I also stick with grey mainly if i have to.

I think this is actually really good, perfection is in your future.

Thank you, while i do need to fix some things, its nice to know people still like this.

Yeah, don’t let anyone get you down dude

MOC looks good, I like the combination of G1 and G2 parts, although it definitely could use some more G1 parts. The color scheme doesn’t remind me of light too much, so I would suggest maybe changing the element, or the colors.
Regardless, the MOC still looks great.

Thank you for the feedback. The reason his color scheme is like that is sort of irony. Note my story does not follow the G1 or G2 stories, but my own. In the story of Veron, he was turned into this thing, he however also becomes the champion of light due to his destiny.