Vibrant Mawsquid - Fear of the deep

Hashtag:biocup2019
Composer’s note: i wish i saw that back gap earlier… but it’s fixed now.
Today i learned… THIS is how to make a MoC don’t worry about what others think do YOU like it? 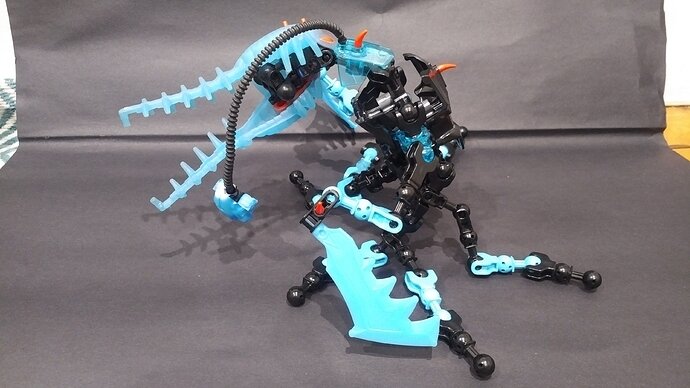 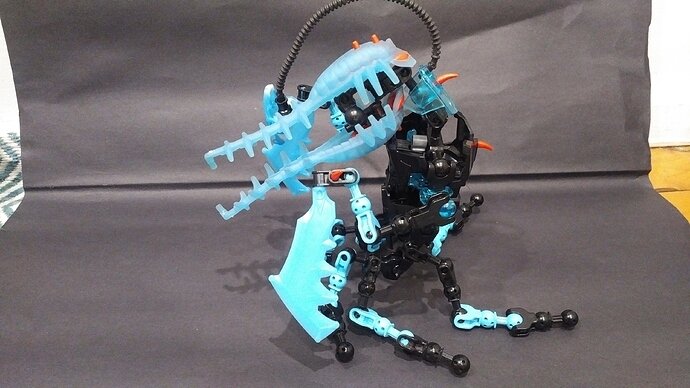 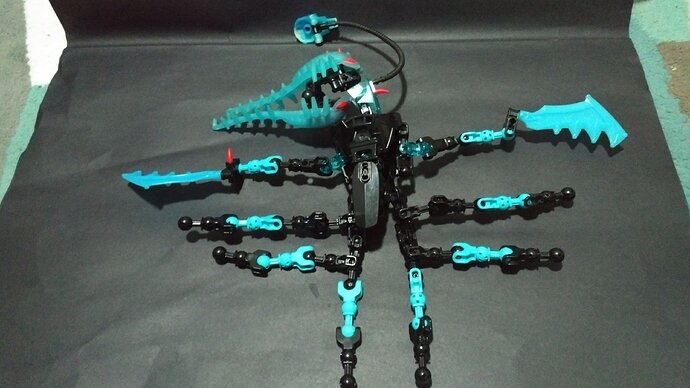 It’s a little hard to make out exactly what its supposed to be. It has an inventive head/mouth design, though does it have tentacles for legs? I cant really tell.

This is pretty messy, and it kinda looks like a pile of CCBS parts thrown together. My biggest problem is the torso, and the…legs?

Like the others have said, it’s a pretty messy MOC, and feels very incomplete. But I like the idea of using two brains as a mouth, though.

aren’t ALL mocs technically a pile of parts stuck together?

I think what he means is we can’t clearly see how these parts are stuck together in the photo and that leads to confusion about the design. And yeah it’s a little messy, is that a tentacle in his neck?

It’s creepy to say the least

no, it’s a light from an angler fish
@LegoDavid @Toa_Radrix @TheMOCingbird
i gave a T pose, i hope it’s ok
this was a hit to my ego

i can see it perfectly well what can’t you see

@Toa_Radrix tentacles…
after a few weeks i posted this i’m kind of mad that people can’t “see” it
why are people being so harsh?

why are people being so harsh

aaah I know what you feel

its usually easier to see something when you already know exactly what its supposed to look like. When I first looked at it, I didnt know what pieces were supposed to be the head, but you would know that easily because you already know what pieces are supposed be the head without looking at it because you build it. Its not even a terrible build, its just that since a lot of the limbs are in odd positions and look similar, and since it utilizes some strange techniques, its harder to make out a clear silhouette.

after a few weeks i posted this i’m kind of mad that people can’t “see” it
why are people being so harsh?

While bluntly worded, the criticisms listed here are all equally valid. Let’s see if I can reword them by looking at the MOC itself.

The side-view that the main pictures are taken in lets us see how gappy the MOC’s torso is, especially on the back. All of the armour plating seems to signify a hard exoskeleton with fleshy tendrils extending from it in a symmetrical fashion with the two largest ones armed with blades. However them basic CCBS limbs only accomplish looking floppy and unstable to pose. If this MOC was much heavier I doubt they could support it.

The angler’s lure dangling off the front is a little too heavy to actually work properly, and so sags far more than it should. Also the point of origin appears to be the neck, which might factor in. There’s also no definable eyes for the creature, which iwsn’t a bad thing, but the ball joints in the mouth imply they’re supposed to be the eyes?

A lot of really interesting concepts, but thrown altogether with no direction in the flow of the MOC (especially in the silhouette) makes it hard to determine what this MOC’s actualyl attempting to do. It’s been rightly called messy and unintelligible because aside from having a mouth, lure, and tentacles, nobody can tell what the picture in your mind’s eye is supposed to be.[quote=“Bloodarchmage, post:5, topic:49596, full:true”]
aren’t ALL mocs technically a pile of parts stuck together?
[/quote]

If that’s the case, why are there standards for good and bad MOCs? How come TolerantAxe is rightly viewed as far better of a builder than me solely based on the fact that I build trash the scale and quality of his MOCs?

It’s because somewhere along the line, a standard was set for what constitutes as a good MOC, and while that varies from builder to builder and critic to critic it still remains generally consistent. So when your MOC consists mainly of limb pieces snapped together people are less inclined to try and perceive it the way you have because basic model means basic interpretation.

Really, I don’t want to shoot you down excessively for this MOC because it’s all practice. Every good builder started small, and the ones who quit moving forward either lost their passion or were shot down by someone else. There are also a lot of people who really never moved anywhere over their career because nobody gave them advice on how to move forward. So don’t be afraid to make more stuff like this in the future. Be creative, try new ideas, learn from other builders, and most of all, don’t be afraid to get criticism. More often than not a less than soft-spoken critic of your work has good intentions behind what they say and their ridiculing speech is mixed with tips on how to improve your MOCing capabilities even further.

So keep building. The future only stops when you tell it to.

@Ghid thank you, i finally know what the heck is going on

I had a reflection while building today, i think my hate for poor MOC-ing comes from insecurity i wish i typed this a lot earlier because it isn’t as clear.
Tangent
I was thinking about what my opinion of BIO cup was
my opinion is that the competition is too hard, not many people can build that well which makes it kind of unfair because it might just be 3 head honchos winning all the time.
Tangent over
and then i caught it, maybe i’m insecure about my skill as a builder, that’s why i was bullying other people if they didn’t make it look good enough.
i’m sorry if i hurt anybody…

I was thinking about what my opinion of BIO cup
my opinion is that the competition is too hard, not many people can build that well which makes it kind of unfair because it might just be 3 head honchos winning all the time.

I totally agree here. I personally didn’t even bother entering the competition because of this.

I was thinking about what my opinion of BIO cup was
my opinion is that the competition is too hard, not many people can build that well which makes it kind of unfair because it might just be 3 head honchos winning all the time.

But the contest is to see who the best builder is. It would be unfair if they handicapped the “head honchos”, or if they just didn’t allow them to enter. The competition is only hard because other people are so talented. Idk, that’s just what I think.

after thinking about it again… so people are grilling me because i suck?

so people are grilling me because i suck?

so “boo your joke sucks”
i’m so optimistic
it kind of turns me off to build but it also makes me want to shut them out because i’m making these for myself and be proud of what i make i only show it because i want to
and to just get crushed by other people is just sickening.
@TheMOCingbird