My Self-Moc! Both, I guess.
Before talking about the mocs, a bit of backstory on how they were made.
Not story-wise, as in why I made them.

Bexle was my previous self-moc. Back when G1 was still running. I originally thought of bringing back Bexle for G2, but I was considering making him my self-moc. There was one issue, though. I'm a girl now, and making Bexle a girl for the sole reason of keeping him as my self-moc seemed odd. So, I made Vidly, my new self-moc based mainly on who I am now. As for Bexle, I have brought him back in a G2 style as well.

Hope you guys like them! Ask me anything bout em, tell me watcha think!

I feel like you should work on the waist area more on your mocs, both mocs here have a very thin waist. Also, Vidly's torso is just black.

What's that green thing on Vidly's back?

Vidly ponytail looks like a brain slug.
However both build looks stretched out.

Oh yes, that's hot! JK, but I'd add some white armor to the torso. Great job!

everything above the waist is nice, the hips are awful, and the legs are awkward.

ew
I don't know what's going on with that torso but I don't like it, and what is that giant loogey on its back?
also the legs are unpleasing to the eye.

I think the entropy heads on them are dumb as well.

Oh gosh it's begun hasn't it

Anyway. Bexle is, for lack of a better term, not good. Too many unnatural-looking parts (waist, chest, hands, head). The color placement looks like it has potential. Sword looks a bit weird.

Vidly does a lot better with the proportions, but doesn't do as well with colors. The torso is the main point of contention here, the breastplate really ought to be white armor, or at the least gold. Also, with the cape off, she does look rather anorexic. Ponytail doesn't work out that well, but then again that's very difficult to work out right.

Oh gosh it's begun hasn't it

I was joking. XD

Anyone mention how the eyes on these guys, and the heads, look like @Ekorak's entropy?

@War_of_the_Worlds , Thats Vidly's hair. The ribcage part is supposed to convey a look of the "hair" growing near the end. Y'know, like hair. @Square It DOES look like a brain slug.

@JMP and @Payinku , What is this "Entropy" you speak of? I understand if this looks like some other head design, but I didn't use any head designs as reference. Coincidence, if anything.

Now onto the stuff.

Many of you (@SwagMeister , @Hawkflight ) mentioned Vidly's torso. Yeah, it's black. Kinda because of how I made the torso. Where in Bexle's torso was built to house armor, Vidly's torso wasn't focused on this, and adding armor on it later is harder than expected. Now, Bexle's waist (meaning hip area, the part with the awkward skirt) isn't really good, particularly the lack of length coupled with extreme not-lack of width.

Looking at Vidly, another problem Im pretty frustrated at is the hip armor. It looks real great when she's in a standing pose. They can't, however, move forwards or backwards, meaning any sitting, running, or any kinda pose involving forward or backward leg movement, make the hip armor look real bad. I need a way to fix that.
Keepin' the heads tho. Might change the mask on Bexle's head, but Im keepin' the heads. I like em. 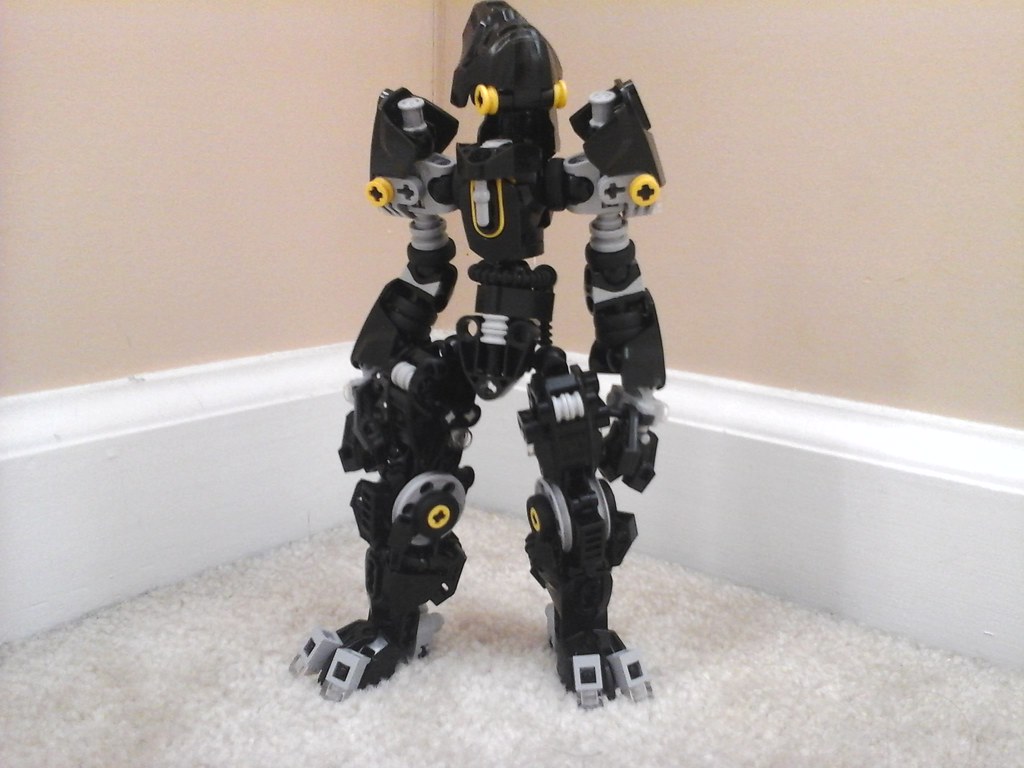 Entropy, in all his glory

I was joking. And I had an unused Steve Higgins gif lying around anyway.

I would maybe go with a trans-yellow ponytail to match up a little better with the eyes. Also, I would add something on the front of her torso so then the stomach doesn't drastically flow into the chest.

I can see where most of the comments on Bexle's waist come from. Would there be a way to make some armor that covers up the joint to create the illusion of a thicker waist?

As for Vidly... Seeing her arms and legs covered with armor and then her torso being left open is a little wierd... Though I would say that the overall thickness is more fitting since it creates a more feminine body. Furthermore, I'd suggest making the hair start at the back of her head instead of the base of the neck... That might make it seem more like actual hair.

All in all, I can tell you dedicated quite some time to them and I don't think they turned out that bad.

Alright. It just looked like it'd be some sort of weapon, or maybe even an instrument.

The body looks pretty good, but the head seems rather awkward in comparison to it.

The arms, legs, and head look nice; but I have a hard time telling if that's supposed to be a weapon or her hair. Also, her waist looks like it's where her chest should be.

Need some work, but you have a nice start.