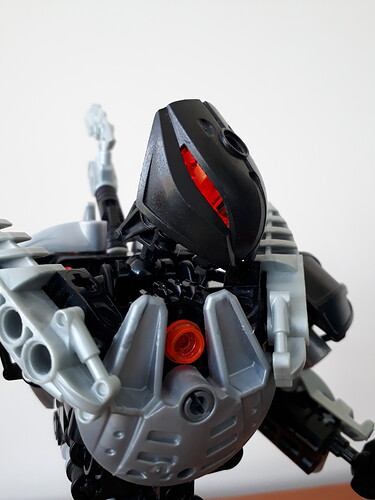 Vordrax was a mutated Rahkshi created by Makuta Reytez, intended to serve as her primary agent and hunter outside of her own realm. His exoskeleton was made from a Shadow Kraata, and modified after transformation, and multiple Shadow Kraata of different powers were fused to create his controlling intelligence. This process was intense on both resources and time, and thus, Reytez has not created a second example, despite the success of the experiment. 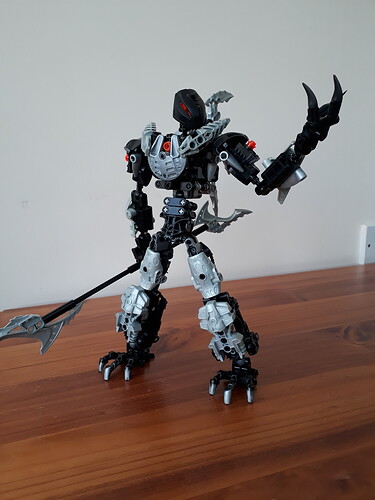 Vordrax’s Kraata is contained deep within his torso, buried beneath multiple layers of Protosteel armour in order to keep it safe. Reytez used a Vorahk Kraata as the base, and spliced it with Kraata of Heat Vision, Teleportation, Darkness, Chain Lightning, Density Control, and Molecular Disruption.

In addition, he possesses the standard Rahkshi ability to fly, and was trained by his creator to acquire low-level elemental Shadow. Additionally, he is fully capable of speech, though he often prefers to remain silent most of the time.

Perhaps his strangest power is that when he fully absorbs the energy of a victim, he can briefly acquire their powers. This lasts an hour at most, and the stronger they are, the less time he has to use them. 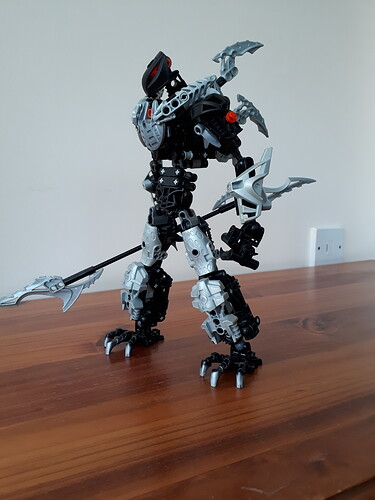 Vordrax’s body was specifically built for mobility, and his joints can move in abnormal directions, allowing him to rotate entire sections of his body. His movements are rather off-putting to Matoran observers, giving them something of an Uncanny Valley effect. 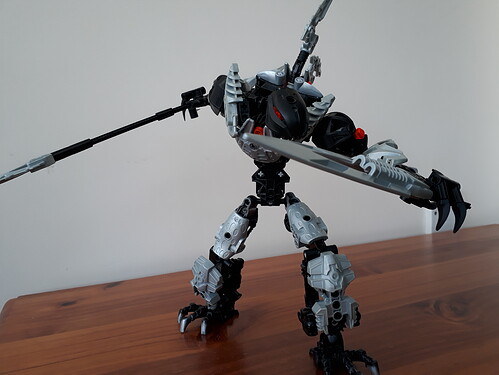 Vordrax is armed with a dual-bladed halberd which he channels his power through. It can return to his hand automatically, and its perfect balance makes it a good throwing weapon.

He also carries a sword, taken as a trophy from one of his victims. 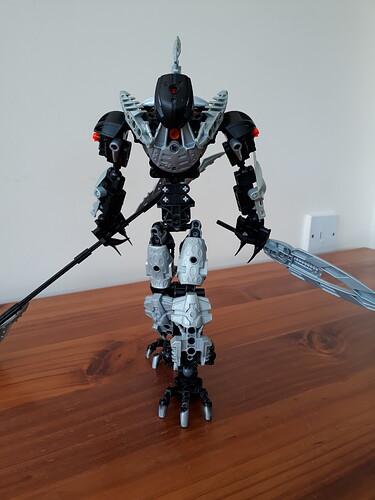 While he is hunting, he is usually patient and reserved. He will stalk and study his prey for hours before making a move, before attacking in a blur of blades, claws, and energy attacks, overwhelming his victims with speed and precision. He prefers to use his weapons to render foes unable to move, before using his powers to kill them, draining their life-force away to nothing.

Curiously, he often allows his opponents to catch small glimpses of him, to ensure that they know they are being hunted, but not the full nature of their assailant. 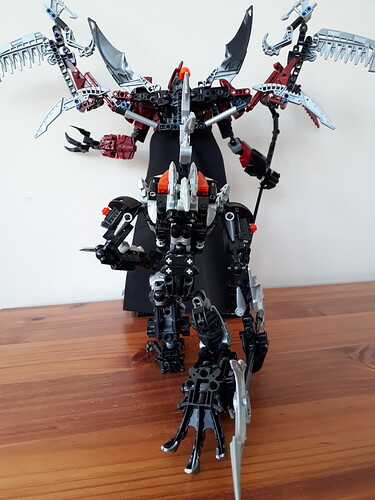 Vordrax is unswervingly loyal to his creator, and tends to linger in the shadows of her throne room whenever he isn’t on a mission for her. Despite his closeness to her, he is rarely seen by anyone besides her, as both parties prefer him to remain hidden. As one of his primary roles is to kill anyone that tries to leave Reytez’s realm, he does his best work if few people know he exists. 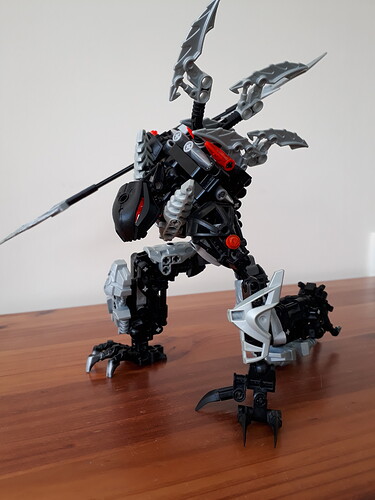 Vordrax is a relatively emotionless being. While he seems to take enjoyment from slaying his targets, and will often prolong their deaths for the sheer hell of it, he shows little feeling outside of a desire to torment and kill.

This is because his Hunger power was altered by his mutations, and has left him with an empty void in his heart. While he does become more emotive when fighting, this is because he is feeding on the essence of his victims, and absorbing traits like emotions from them. 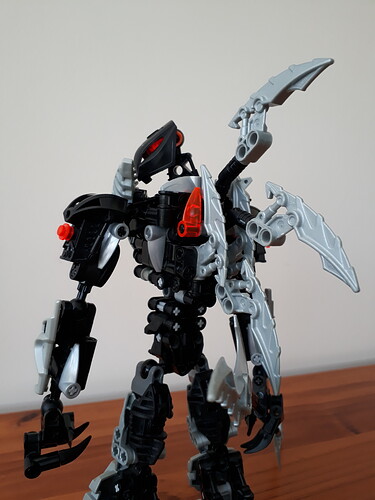 One of the rare exceptions to this void is his longtime rival, Arcan. The renegade Su-Toa was one of the first to escape him, though he was stabbed through the chest and lost an arm in the process. Since then, he has managed to take some level of joy in causing Arcan as much misery as possible. 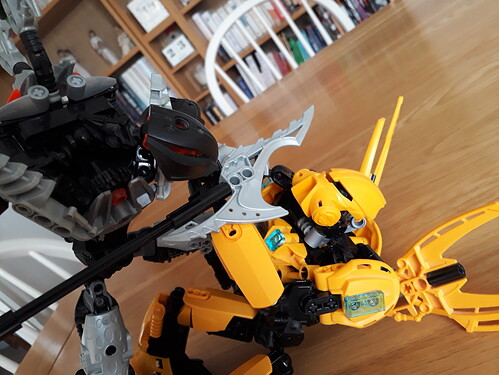 (This is a slightly older picture from when he had different fingers, but it’s otherwise the same MOC and I just couldn’t make a retake work so the old pic stays)

Their rivalry is one that has lasted for a while, and Vordrax was responsible for the abduction of Arcan’s partner, Metara. He was also present during the incident where the Su-Toa was driven to unleash his Nova Blast, destroying the island of Korvos. As such, Arcan despises Vordrax almost as much as he hates Reytez herself. 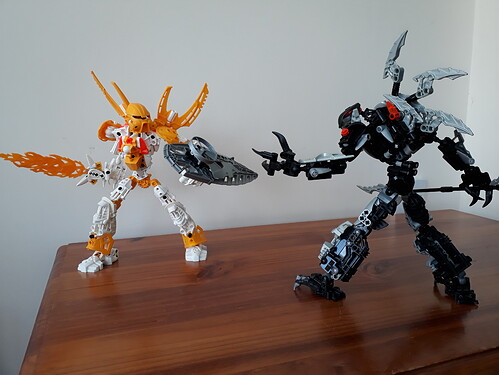 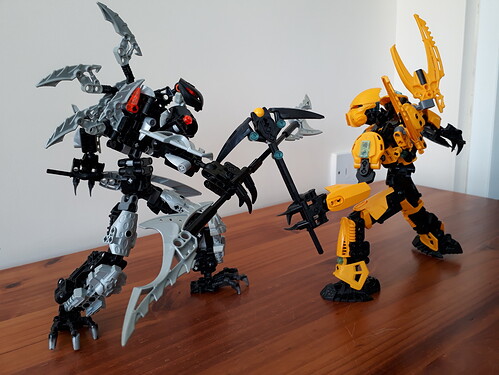 Externally, Vordrax is actually an older MOC than Arcan himself. I made the first one in around about 2009-2010, originally intended to be just a MOC of a generic Vorahk, but actually appropriately scaled for 2006-2009 sets, and has been in my collection in one form or another ever since. He was actually my first Self-MOC, before I created Arcan and replaced him.

He’s still remained a pretty major character for me, however, and continually developed until now. Story-wise he’s basically a walking personification of depression.

As is probably fairly obvious, the original version of him was in part inspired by the work of BioRockDude, whom I used to watch a lot as a kid. Many of the current elements, like the construction of his back-blades, chestplate assembly, and the use of Metru hip pieces as part of his greaves are from the earlier versions of the build. Unfortunately, I don’t have any photos of the ancestral versions of him, only this relatively recent one, from around the same time as Arcan V2. 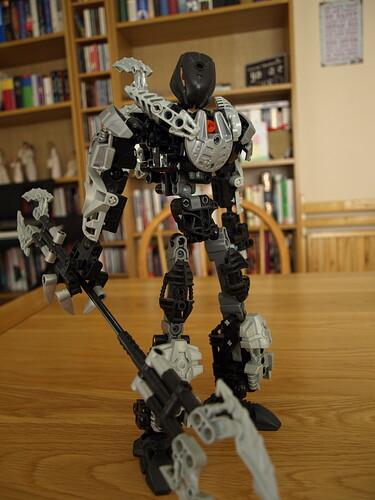 The other major inspiration was the depiction of Grievous in the Genndy Tartakovsky Clone Wars shorts.

This is my first MOC posted that isn’t an Ahkmou or an Arcan, and I felt it was only fitting to make it one of my oldest creations that got the nod, and a non-Toa as well. 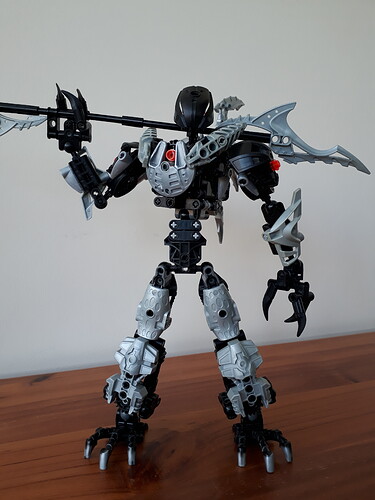 ooh this guy looks awesome! I quite like the torso build, and the armoring is pretty good as well.

Also I love the amount of detail you put into your topics. nice job!

I kinda love the classic edgy Bionicle build and name.