Vortex literally died after an explosion sent a fragment into his chest, but he awake and noticed that the fragment was made of pure quantum and was producing pure energy, keeping him alive. He bought two giant backpack batteries to stock the unused energy and built a gun using his own energy to create portals (also a little wrist gun in case of fight). With time, he improved his technology to create one single gun, faster and able to shoot whether energy or portals. By concentrating his energy in the back, he can also use his batteries as propulsers, very usefull in battle.

It’s cool, but it looks like a Breakout Stringer Revamp than an original MOC. And you really should remove those feet out of the back, they look awful

well @Toa_Radrix , I never said it was a moc, I even added the “revamp” tag, but the backstory I created makes him a new character

I really like the jacket, but the feet on the back look reeaallly out of place.

they can look weird, I agree, but in my opinion they makes great backpack batteries (they also do propulsers, I forgot to say that)

Well, time to do another critique as nicely as I can to avoid the mods shutting me down.

Overall, the MOC is very simple, nothing especially bad about it in any given area. Unfortunately, nothing bad doesn’t necessarily mean it’s good, either. It feels very bland and basic, with some odd design choices with some amount of backstory importance (probably to justify their inclusion). The custom cloth piece is nicely cut, and while I don’t like the custom headpiece for my own selfish purist reasons, it works well.

Time to address the elephant in the room: the feet on the back. As far as I can tell, they add nothing to the form of the MOC, don’t support the cape, and are only there because you wrote them in. There is a third foot piece directly in the center of his back which the cloth piece helps to hide the existence of, but I’m going to ignore it and focus on the other two.

they can look weird, I agree, but in my opinion they makes great backpack batteries (they also do propulsers, I forgot to say that)

…Aside from batteries not having any given way to output enough energy to propel someone of any weight through the air, they don’t look anything like batteries. It would be more convincing if you managed to build them out of system instead of using two foot pieces, which aside from a weak story reason, serve no purpose and detract from the MOC itself.

Seeing as your backstory is the main force behind the MOC’s design, here’s a possible alternate backstory for you which could help you alter your MOC a bit:
Vortex was killed in an explosion which pelted his body with fragments of an unknown material. However, the material, classified as Quantum, an energy-producing substance, reanimated his body and somehow restarted the dead AI that inhabited it. Now Vortex can pull from his nearly limitless supply of energy to use a jetpack he mounted to his frame, to let him fly about for short distances. However using too much of his energy at once will greatly tire him out, as it needs time to rebuild its supply.

well… before I added the classic bricks, in his first version (no cape and little gun) he could transform 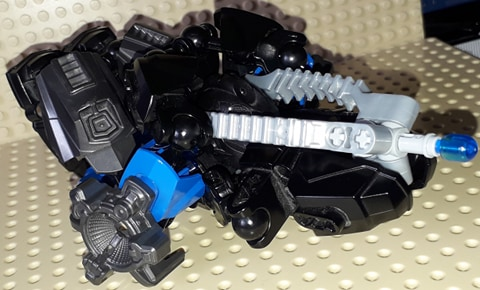 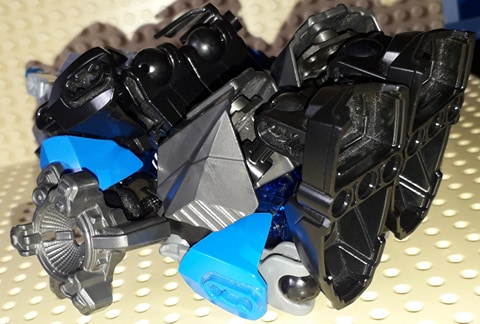 Now this… is much better

This is still just breakout stringer

I think renaming him Breakout Stringer Revamp would make it better