Wairuha Nuva (or Lewa with an awesome jetpack)

Rising out of the Energized Protodermis is Wairuha Nuva (the fusion of Gali, Lewa, and Kopaka Nuva). Gali Nuva and Kopaka Nuva's torsos combine to make an awesome jet pack equipped with wings and turbines, to propel Wairuha through the sky or under the sea.

After I finished the Toa Nui, I wanted to see if I could Redesign the Toa Nuva Kaitas. I start off with building the original combiner design and see if I can improve it.

Building instructions for my version of Wairuha Nuva can be found on Brickshelf.

Gali's propeller equip to the back to make the turbines for the Jet Pack, Kopaka's Blades become wings, and Gali's Axes equip to the feet to become "air-stablizers" or flippers.

The weapons are also interchangeable. You can switch Lewa's Katanas and Kopaka's Ice swords. And then you can switch in the Ice blades as Ice skates if you want.

Here's him with the shield. Unfortunately, I do not have Kopaka Nuva's shield so you'll just have to imagine his Mata Shield is his Nuva Shield.

I have also made an alternative design. This design uses the gear functions and gives him better head movement.

And just for some fun, lets make him fight a Bohrok Kaita.

He looks awesome and tough.

Preety nice one man, much more interesting than original. [imature] Dat bootey tho [/imature] is this Wairuha Female?

I won't say this is better than the original, but it is a very interesting take on the Nuva Kaita.

No, I definitely consider Wairuha male.

The body is really the normal Toa torso with a giant Jet pack attached.

I would question as to why you only used Gali's torso, feet, hands and weapons and not her limbs...

I didn't use them because they weren't used in the original Kaita. 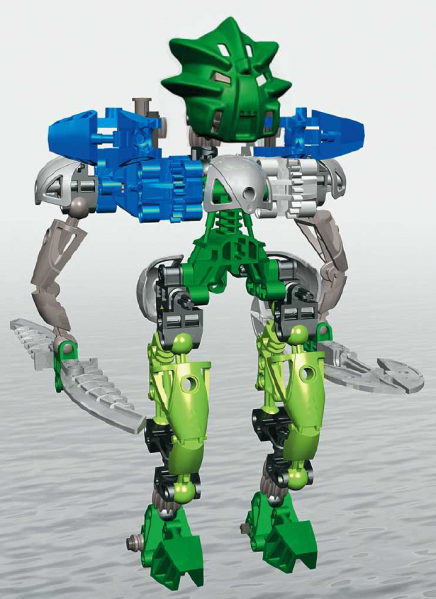 Nice use of that white Miru Nuva. Pretty good MoC, though. For some reason, I really like the legs.

Very nice! I'm always impressed when someone manages to make a combi-MOC look even half-way decent.