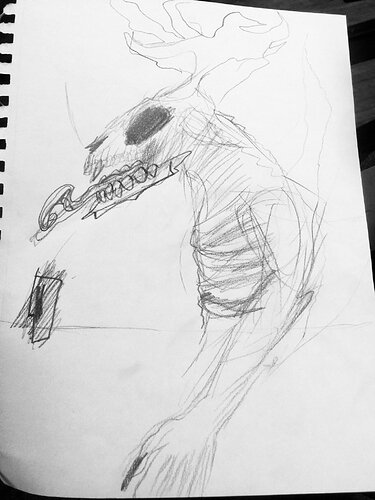 The drawing is not scary at all… It isn’t even finished.

Well it’s not scary to me either. It is finshed it’s just a torso sketch

Don’t understand how it’s scary… not a bad sketch

I know it’s not scary to most but I put a disclaimer for anyone who scares easily like I used to.
Also thank you all this is the most detailed thing I’ve drawn so I’m glad you all like it!

Sketchy is intentional looseness, but even though it’s loose, it’s still noticeably controlled.

Scribbly doesn’t appear to have much rhyme or reason, no intention behind its looseness.

Being honest, I see a bit of both in this. The lower jaw and tongue, for instance, appear sketchy and fairly intentional, and look pretty neat. Other places like the eyes, inside of the neck, and the antlers look scribbled in, the eyes especially.

It’s not a bad drawing, it just could use some more intention behind it, and this can be a good base!

Once it’s done, redo the main lines in pen, let it dry, and then erase all of the pencil. It gives it a nice clean look.

This is really old I actually don’t know where it is.
Also the intent was for it to be un clean