What if Jaller kept wearing hau?

If jaller was wearing his hau when he became Toa, what shape would his hau be?

I don’t think Kanohi’s shape determines great or noble or normal matoran kanohi.
but, I think it can change again because it has already been modified once.

It would have been a Great Hau of some sort, but I really can’t decide on a shape.

From a real world parts production perspective, if Lego chose to make a Toa Jaller wearing a Hau in 2006 or 2007 they probably would have gone with the Lhikan Hau, since we know it was still available in 2006 when it was used in the Duracell Gold Good Guy (Turaga Lhikan) set. Its possible the Gold Good Guy though used excess stock of the mask since it used the old gold colors and not the pearl gold that late production 2005 and all the 2006 sets used, but it still has a better chance the mold existed at that point. Also the axle on the Lhikan Hau is a more snug fit on a Metru Head. Unfortunately by 2006, I have doubts that the original Hau mold from 2001 was still available since it had been last used in 2003 and had been out of use for the three years after that (and when the original Hau eventually did return it was with a new mold and design style in 2010)

Aren’t the Mata, Lhikan and Stars Hau only have different production piece, while they should look identical in-universe? We never had a full film about 2001, or 2010 storyline.

Most likely it would look like neither. Instead it would become an all-new organic great version of the Hau because of the unusual effects of the Inika transformation.

The Hau Nuva is already a good take for “Hau but with some kinda organic overgrowths” so something along those lines but with a different more textured spin on it.

Personally I think that would also undo Lhikans special ornamentation if it would even reappear at all, but that’s up in the air.

Oh, I completely forgot about organic kanohi changes that occurred when they transformed into inika. 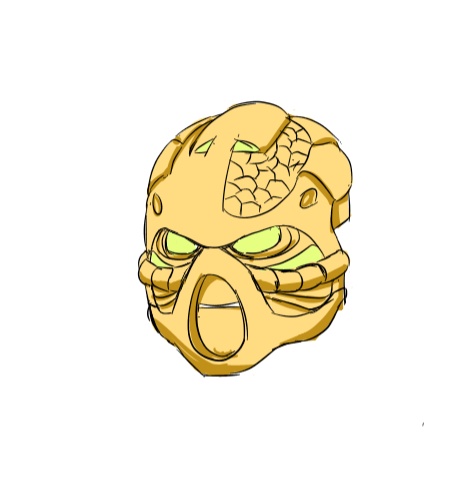 Yeah I agree this is pretty much it…
For some reason it feels like Hau would still be symmetrical, so I’d imagine it having those scales on both sides. Otherwise this looks pretty on the spot, especially those “gills”.