So, uh, first off, plz forgive my god awful picture Quality. >.< Will try to get better stuff in the future, but for now, I just wanna share.

I notice lots of Bionicle. And that's to be expected, of course. But I sorta wanna use this topic as something to open the flood gates, maybe? Since, y'know, this area is about more than just bionicle. Maybe throw in some system stuff to the mix! So I made some MOCs that are meant to be in the theme of the Nindroids from Ninjago 2014.

I like their black, grey, and purple colors, and I love circular saws. So I tried my hands at some Nindroid Vehicles. These aren't meant to replicate anything from the show, these are just things that sorta could be in the same universe, or fit with the theme of their stuff. 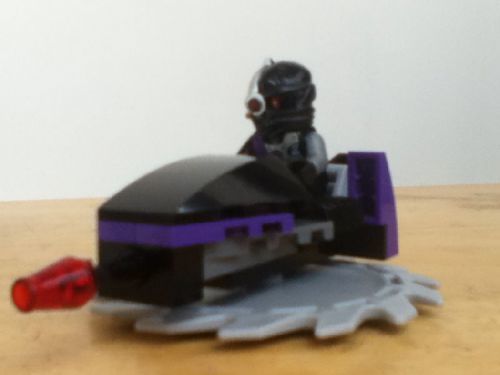 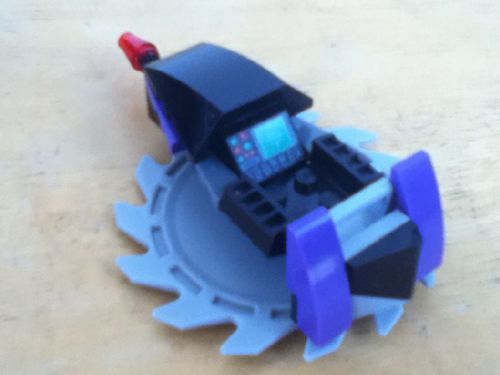 Another different image without the pilot. 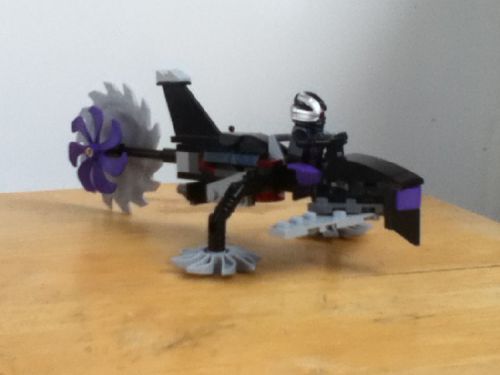 This one's like, a helicopter thing, with a tail and twin blades. I made the tail ludicrously huge on purpose. I thought it was funny. So I ran with it. This is like, a landing position, I suppose you could call it. I like to call it the Air Cutter. For obvious reasons. Flying and Saws. 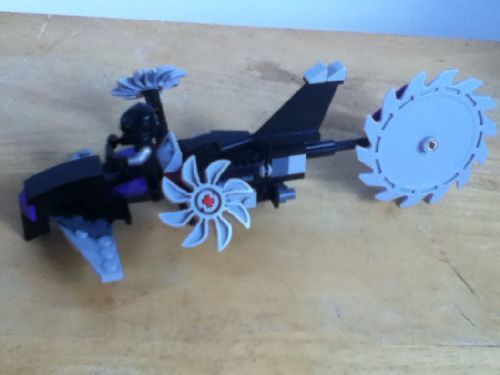 There's its flying position, you could call it. I wish I had better display options. 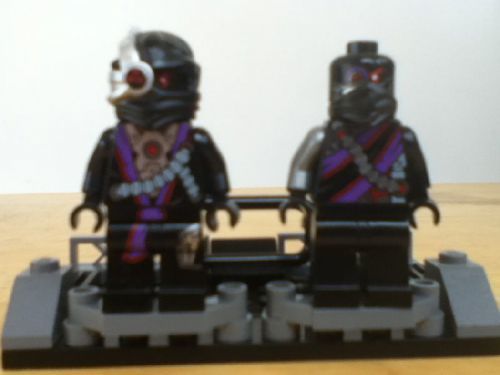 These are a pair of slightly modded Nindroids. As in, not Generics as we've seen before. The one on the left is Nindroid Unit 385, and he's different in that he uses the Cryptor Torso with two black arms. The legs, helmet, and head beneath are all normal Nindroid fare. The one on the right is Nindroid Unit 274. He uses the "Nindroid Drone" torso and legs, but with the Silver arm from Cryptor(It's his right arm. On most droids, it's the left.) He also uses the Cryptor head, and the face mask from a spare Cole. I think it's just cooler that way as opposed to the exposed mouth. The less human features you see, the more threatening, IMO. For watchers of the Venture Bros. think of these guys as the Early Season 21 and 24 of the Nindroid Army.

They basically serve as pilots to my two favorite vehicles. 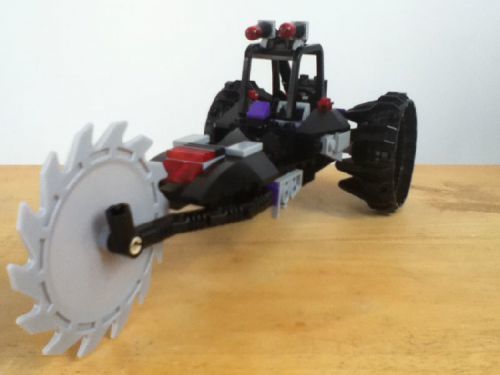 This I call the Blade Runner. I wanted to use a Saw as a wheel, and I mostly just wanted a ground vehicle in general. 'Cause outside Destructoid, the Nindroids don't really have any(Tank Bike doesn't count. It's piloted by Overborg, not a true Nindroid) 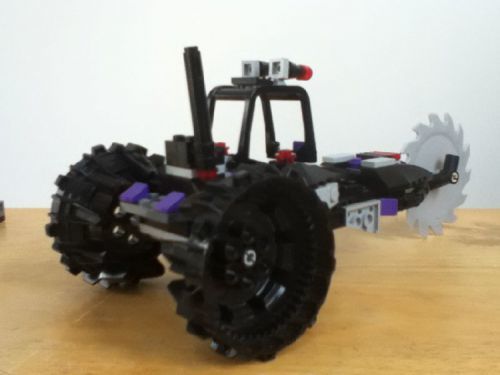 Just a back view, without the pilot. I should add some tail lights. 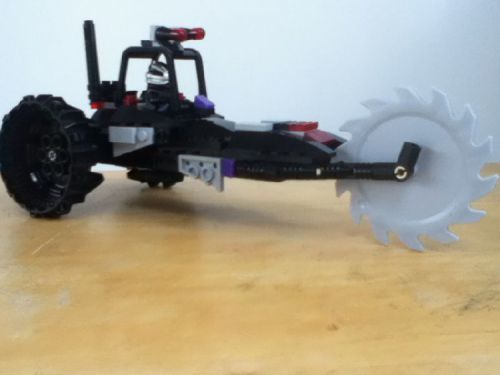 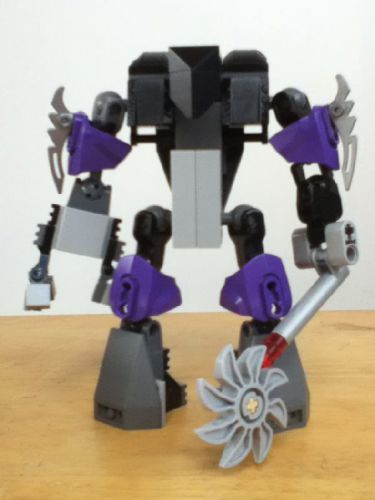 And I made a mech suit thing. I mixed design aspects from Kai's Fire Mech as well as Cole's Earth Mech from the Thunder Raider. 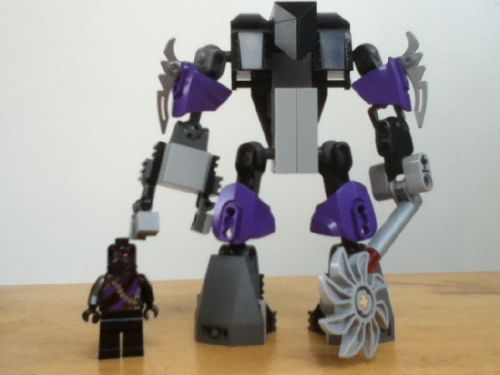 Compared in size to a standard minifig. In this case, 274. 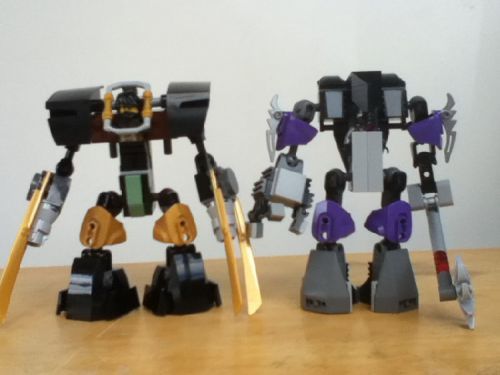 Earth Mech comparison shot. Here you see also what 274 looks like in the mech. 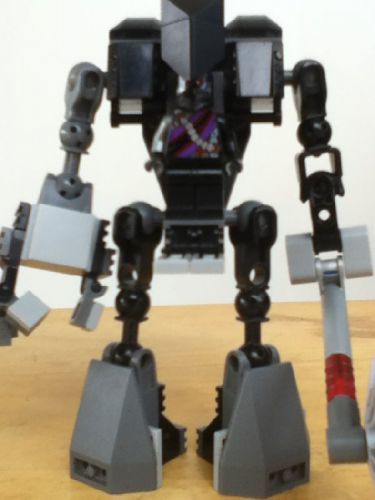 I thought it'd be clever to use bones that match the color scheme of 274's limbs. 3 black, and one grey. 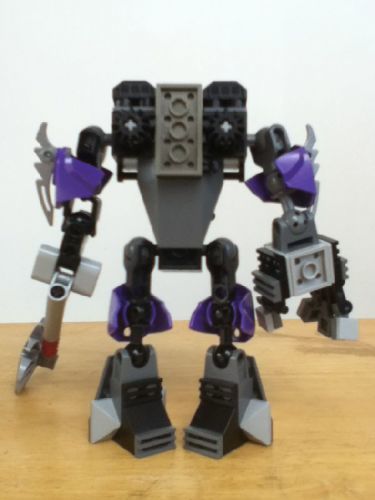 So yeah, that's all my stuff, hope you enjoy them. If not, tell me what you dislike, I'm open to comments, criticism, praise, all that jazz. 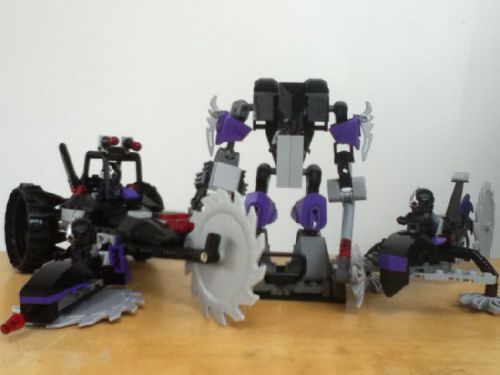 Fancy stuff! But don't worry about the cam quality, its better than mine. And I'm not very good with the bricks, so these are cool...

I think the blade runner is my favorite. Good job.

Like TERMINXX said, the quality isn't that bad. Maybe it's not the best, but I have seen far worse. Just look at my profile picture!

I also tried to make custom Nindroid vehicles, but they kinda suck.

This version looks strikingly similar to the "Pursuit Model", as you call it. Other than that, it's pretty good, it simply lacks in the trans-red department. I don't know, maybe you could fit a couple studs on the back as tail lights? The control panel goes against the color scheme, with all that green and whatnot, but it's understandable if you don't have a control panel that would fit in with the Nindroid color scheme, so putting some levers or studs would work best here.

Where the heck did you get that purple saw blade? Again, there's a severe lack of trans-red on this one. Also very little purple, other than the saw blade. As for the vehicle itself, I could see a couple of these going after the Ninjacopter or the Kai Fighter. Also, I don't see any form of weaponry on this thing, so how is it supposed to fight?

I like that stand you made for the Nindroids, with all that fencing and overall Nindroid-looking pieces. As for the Nindroids themselves, they're simple, yet cool modifications. I have literally done the same, aside from switching the arms around.

The Blade Runner looks like a tractor. Just give one of your Nindroids black overalls and a hat, and you have yourself a pilot! Anyways, this one also has very little purple and trans-red. Interesting concept with the saw blade wheel, but like I said, it looks like a Nindroid Tractor. Are those things above the cockpit supposed to be headlights or laser cannons? Yeah, you probably should add tail lights. Also more weapons, and everything else I said.

The mech looks pretty cool, but again, very little trans-red. The purple, however, is far more present on this mech than some of your other vehicles due to the armor. The hand looks like it could be much better, maybe if you added some Exo-Force finger/arm pieces. Also, could you try to add some controls on the mech, if possible? And could you replace that dark grey 2x4 plate on the back with a dark bluish-grey one?

Overall, they're good MOCs, but could you do a little more work on the color scheme and weaponry?

Wow THIS IS EPIC!

I agree with most everything you said.

I sorta intended the Scout model to look similar to the Pursuit model, same size class, just about, but I think there's enough differences. Definitely a good call on the trans red, I'll see if I can't fix that. The green on the control panel specifically has the targeting computer looking reticule section, so I think the clash of colors may be forgivable.

Fun fact, I actually got that purple piece on the tail of the Air Cutter from a Skeleton Helicopter from Ninjago 2011. From the Lightning Dragon Battle. I'll certainly take weapons into account, as they mostly just slipped my mind. Expect a version two eventually. For all of these, minor changes they may be.

To clarify, the red bits on the rollcage of the Blade Runner are indeed supposed to be lights. I think most of the "Tractor" look comes from the large single smokestack thing. This is the MOC where I think it becomes very apparent that I lack purple pieces. I sorta tried to keep Trans red kinda low, but I'll make my best attempt to get weapons and more trans red at the very least.

The grey on the mech was me being lazy, no excuses. That'll be fixed, worry not. I could attempt to add controls, but the problem is finding out where. I actually didn't add trans red here on purpose, since the humanoid Nindroids themselves don't have trans red, just their weapons do. Also, I tried Exo Force arms. They were far too long, so I went with the modified 1x1 plates with the clips. I think it looks good and works well, but maybe seeing it from more, better angles would allow you to see why I think so. They make a surprisingly good fist. That's why I added that trans red part on the weapon arm. 'Cause their weapons /do/ have trans red. But they themselves don't.

But yeah, thanks so much for the feedback. I really appreciate it. ^^