Who is your favorite comic book character and why?

Comic book characters have become so mainstream and well-known since the MCU became a thing. So I’ve been wondering who you’re guys’ favorite comic book character is and why. Mine is Wally West, the third Flash, and probably the most well written Flash along with Bart Allen. My only gripe with Wally is how Heroes in Crisis treated him. Other than that I like him. 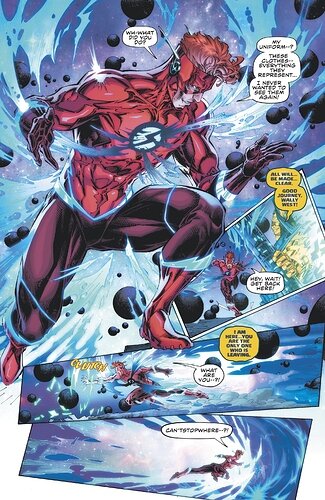 I’d have to say some of my favorites are Calvin and Hobbes, Deadpool (the one from the more recent Spectacular Spider-Man cartoon) and a lot of the characters from the graphic novel series titled “Bone”.

Calvin and Hobbes have always been a source of laughter for me because of the kid’s imagination and general shenanigans.

The version of Deadpool I mean mentioned above is another favorite because it still keeps the unpredictable, crazy, hilarious and Fourth-wall-ignoring character preserved while also making his humor more suitable for kids which is a bit tricky as the guy tends to be pretty crude and inappropriate with his humor most of the time; plus he can be pretty serious sometimes like the comic where he actually helped a girl not commit suicide, I’m not kidding; that was actually an official comic of his.

Thirdly is the Bone series. I cannot begin to count how many times that series cracked me up from the character interactions to the world of the series seeming to have one heck of a sense of humor when winter rolls around. The whole thing is just plain and simple fun from start to finish and yet it also is a touching story about family and overcoming vices and fears to accomplish goals. Seriously, I highly recommend giving it a shot.

Gwenpool had a nice run but that’s long over with

I guess Cerebus would have to be my favorite for just how ludicrous and insane the creator became.

The Thing, Ben Grimm, actually is pretty great I like him. Feels bad how Jack the King Kirby has gotten a pretty raw deal.

Deadpool (the one from the more recent Spectacular Spider-Man cartoon)

Oh, my bad. Spidey’s had so many shows and stories I have a hard time keeping their titles straight.

Is manga allowed? If it is, then Takeo and Yamato (they kinda have to go together) from My Love Story!.

If not, then… Dirge from the 1 transformers comic I have read.

I haven’t ever been able to decide which of these two is may favorite over the other, so I’ll say my favorite Marvel character is Miles Morales and my favorite DC character is Wally west. Although my only real knowledge about them has come from movies, TV shows and ComicStorian because I haven’t been able to read the comics, that’s still enough for me to really love these characters.
Miles is someone I can relate to, as I’ve had my world rocked a few times, but nowhere near as much as him. He also has some really great stories and moments, especially in the Spiderverse movie.
With Wally, the version I’m most familiar with is from Justice League Unlimited. He had some great moments there, like when he switched bodies with Lex Luthor, or when he beat brainiac who was fused with Lex Luthor.Lex does a lot in this show

One of my favorite things about Wally West on Justice League/Justice League Unlimited is that he is voiced by Michael Rosenbaum, who played Lex Luthor on Smallville.

Spider-Man because he is.

While not super hero comic characters, I really enjoyed Saxon from David Petersen’s Mouse Guard and Mike from Doug TenNapel’s Cardboard. Though I’ve been reading the web comic Lackadaisy, and Mordecai Heller is hands down one of my favorite characters.

I do like Scott pilgrim, but here are a few awesome web comics that I know about.
Commander Kitty
Space pawdessy
Lackadaisy as @TheMOCingbird has already listed
Zistopia
Ichabod the Optimistic Canine
Wolf Wizard

do I need a reason

To be a bit mainstream for a moment, Bruce Wayne is certainly up there. He’s certainly the one I’ve read/watched the most, just seems a bit obvious. Same deal with the Joker, they’re a rivalry as old as time and I can’t fault them. I’m also partial to Spider-Man media (haven’t really dug into his comics much though), since, well, what kid doesn’t love Spider-Man growing up? And then Superman. I never really cared for Superman as a kid, he just seemed a bit boring to me. But now that I’ve actually read some of his stories, he’s actually a pretty chill guy (something I honestly wish other media could get a handle on more often). I like him

As a kid I also really found myself connecting to Bruce Banner. I had an awful time with my temper too. I haven’t really read much of his stuff, but the concept really speaks to me.

Green Lantern. Ever since I learned about the idea I just thought it was the coolest thing - create anything you can imagine? Just… yes. However, most of the characters with access to these powers were quite basic with them. The same sorts of things: hands, swords, machine guns, whatever. Kyle Rayner, however… 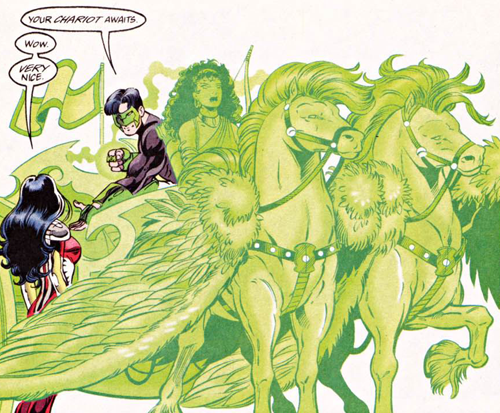 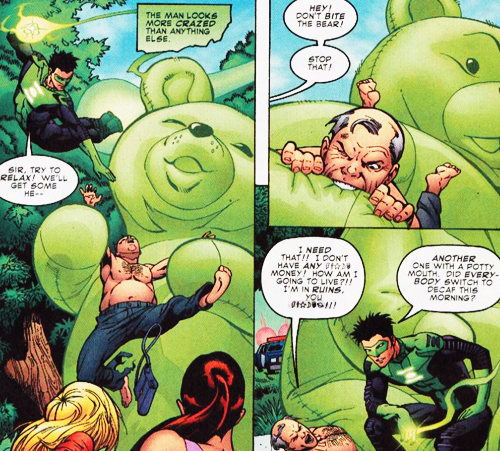 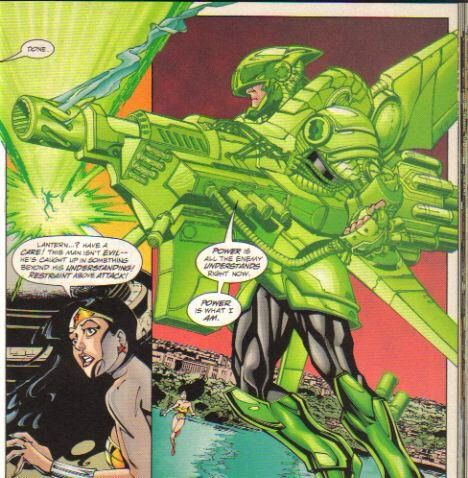 Then Aquaman. I dunno if the movie means he’s officially cool now (probably not), but I never needed that to love this guy. Yes, I was actually sad enough to like Aquaman as a kid, sue me

I just have a thing for water heroes is all, and the idea of him being able to control whales and sharks and things too is just the icing on the cake

(It also probably helps that one of my first exposures to the character was Batman the Brave and the Bold - outrageous!

A hero torn between two worlds, always second-guessing himself - he’s been through a lot (particularly in the Peter David run of the character). 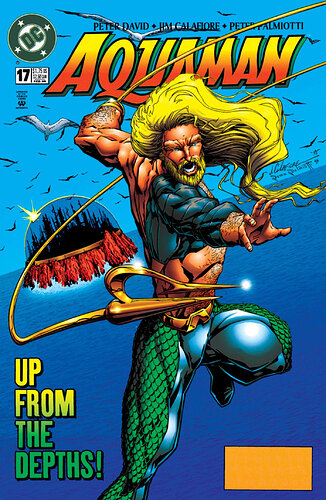 It looks kind of meh from the outside, just pushback from people’s belief that he can’t be taken seriously - edgifying him and giving him a hook for a hand and all this. But it’s so much more than that. This run expanded the mythology, pitting this man against a world of gods and monsters, the mysteries of the deep. It’s just amazing. But enough gushing, let’s move on

John Constantine. Ever since I heard of this guy - a snarky cynic and avid chainsmoker who dabbles in sorcery from bloody Liverpool of all places, I just fell in love. 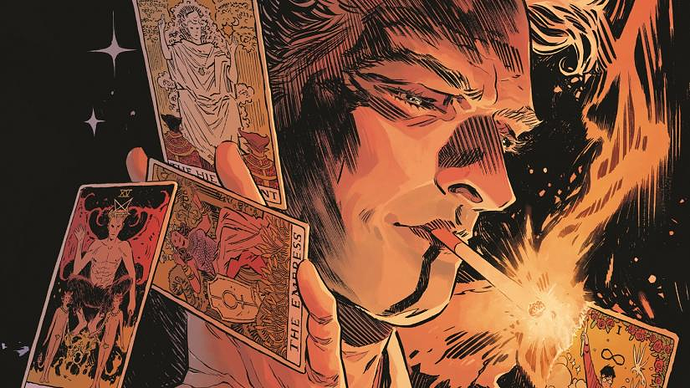 You’ve most likely heard of him (if you have at all anyway) thanks to his NBC show, or maybe his subsequent appearances in the CW DC shows (he’s also been getting a lot of animation appearances actually). If you do like what you hear, just keep in mind the comics are a bit… gritty. This is black magic and demons we’re talking about here.

That’s all I can think of off the top of my head. There’s undoubtedly more, but I’m a bit busy at the moment so I think I’ll just end this mini essay here

Oh yes, as a quick bonus one: does Lost Light’s version of Swerve count? 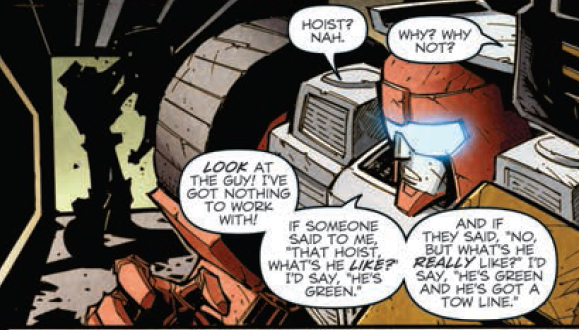