Why are the Orange and Clear Kaukau so rare and expensive?

Alright. So personal gripe of mine: I love the color orange and was elated when I learned that the '01 Kaukau was made in trans-orange for Pohatu. However, it is one of the more difficult non-misprint masks to track down and getting it under $40 is a steal. The clear variant suffers from this same issue, but worse. The cheapest US listing on Bricklink is currently $64. Granted, this is not an insurmountable challenge for adult collectors, but I wanted to ask you all, why is this?

So are either of the masks rare? Without conclusive data, it is impossible to tell if either were less common than any other mask in '01. It is possible that they are hot items for collectors due to their price, current rarity, and color. Because most of them would hypothetically reside in collections, it then follows that the available stock would be limited in the current day.

All of the non-blue Kaukau are usually among the higher-priced masks. The green and red look nice, but are a bit dimmer than these two masks. The Kaukau being transparent is already somewhat of a novelty, and the two misprints make it even more interesting. An article on Brickset theorizes that the orange mask is likely priced because of its striking color. This checks out to me. I have no idea why the “white” clear mask is so expensive though. Perhaps it is most vulnerable to wear. Perhaps the clear color is useful for mocs bc it doesn’t distort the face behind. Or perhaps it is the most-lost '01 kanohi because it is the hardest kanohi to see, thus relegating many of them to long-forgotten bins and boxes in attics and garages.

I’ll stop whining. All I’ll say is that if they ever invent time travel, you better believe I’m going back to 2001 to pick up these masks for their original retail price!

I always thought that all the Lego minifigs and Kanohi and other collectibles are so expensive for a very logical (yet stupid) reason: there are fans who are willing to pay that much. Somebody sometime bought that mask for those 64+$ (or less, because inflation), which means it will be sold for that price, and will be bought for that price. Someday. So no reason for sellers to lower it.

The only way to lower the price of collectibles is to not buy them for the current asking prices.

For certain stuff like the silver Nuva mask, these Kaukau and certain Nuva and Mata Mask we should collectively stop buying >10 USD masks just to drop the prices

Edit: Imma start a campaign called #BoycottThePrices for this feel free to use the hashtag if you want to contribute and join the movement

An article on Brickset theorizes that the orange mask is likely priced because of its striking color. This checks out to me. I have no idea why the “white” clear mask is so expensive though.

If the orange one is expensive because it looks striking, then I think the same would apply to the clear one. Clear is a pretty cool and very rare (in bionicle) color if ya ask me.

Kanohi and other collectibles are so expensive for a very logical (yet stupid) reason: there are fans who are willing to pay that much

This is very cringe effect but makes sense. Collecting certainly has it’s ups and downs, and this just happened to be a pretty bad down.

For certain stuff like the silver Nuva mask, these Kakama and certain Nuva and Mata Mask we should collectively stop buying >10 USD masks just to drop the prices

OH MAN I TOTALLY DIDN’T THINK ABOUT THE NUVA MASKS! Even the non-silver variants are pricey, but $230 for a silver Hau Nuva? Disgusting. And I’m in favor of using the hashtag, the resale price hike on all of these is sickening. $40 for an orange kaukau is still unacceptable but not as gross as $100+ for a non-misprint. 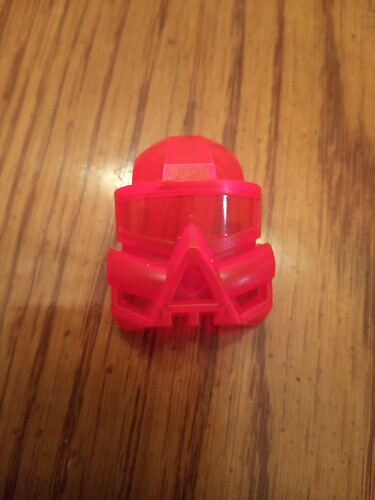 Oh man you are one lucky guy

I’ve been fortunate enough to own a clear kaukau since childhood, as well as found a second one a couple years back from a used parts table at a lego event, which I sold to a friend. I miss those scavenging hunts, curse this pandemic.

I think one factor is simply the desirability of translucent masks, as there’s an allure to them that a solid color won’t provide, as well as the wider potential for mocing. Neon colors attract us like lamps attract flies.

At least for the nuva masks, I theorize that the mask packs either didn’t sell well, or weren’t as widely available. I don’t recall ever seeing them so they may not have been in that many stores, which is why I hold that as a possibility. In either instance there’s significantly less supply, which against the collector demand spikes their prices. A collector acquaintance is currently lamenting about the silver kakama nuva and its ridiculous price. 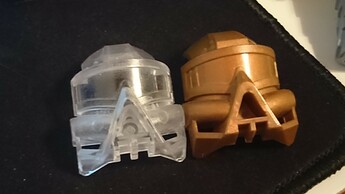 At least for the nuva masks, I theorize that the mask packs either didn’t sell well, or weren’t as widely available. I don’t recall ever seeing them so they may not have been in that many stores, which is why I hold that as a possibility. In either instance there’s significantly less supply, which against the collector demand spikes their prices

This would work as a theory, but then why is the silver Miru Nuva so affordable? I recently picked up one for $10, which just baffles me? Why aren’t they all consistently priced? 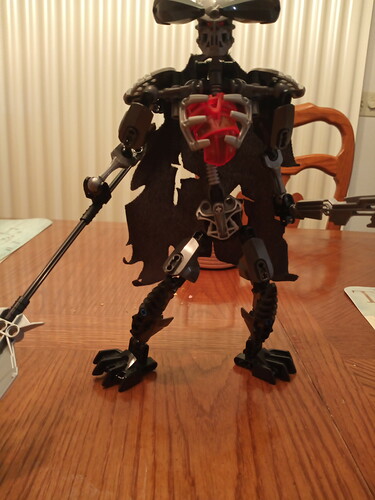 Yep this is how I am using mine.

Why aren’t they all consistently priced?

Beats me, there’s too many factors to consider. Pull rates, aesthetic preference, etc. Looks like red, brown, and black miru nuva are also quite affordable. Meanwhile my white and blue miru nuvas go for 15-20€ each, which I had no idea. Strange coincidence I’ve found exactly those two from used part tables.

I’m not saying don’t spend that much money, but don’t act like it’s something we should be impressed by.

I am probably the author of said article, if you are referring to the guest bit I submitted to Huw last year during the lockdown. A few pieces I have been able to glean from research since then, which suggest more reasons for the rarity of the various Kaukau’s and other mask oddities.

Purple Dave (formerly of Mask of Destiny) pointed out on Brickset comments recently that the Kaukau’s, in general, were likely rarer due to them using a different type of plastic compared to the ABS masks (Kaukau’s are Polycarbonate, not ABS). Add in the fluorescent factor to the trans-orange one in particular and it further drives prices since hey Lego fans like things that glow in neon light. I had to pay a pretty penny for my trans-orange Kaukau when I was completing my Mata mask collection last year.

As for the protodermic masks, one reason the Miru Nuva is cheaper is that it is reported to have been in one of the bulk parts bins (likely set #8711). From my memory, I remember no instance of advertising for the protodermic Nuva masks, especially since the focus on early 2003 was instead on the Sterling Silver Krana. I remember the protodermic masks in the 2003 Bohrok Animations, but it never occurred to me as a kid that those were physical masks that I could buy IRL for some reason and I only learned of their existence as an adult. Also seeing that the mask pack containing the protodermic masks was the last mask pack Lego ever released for Bionicle probably didn’t help its case either, since Lego was sunsetting the mask packs in favor of the upcoming Kraata and Kanoka sets. Mind you that mask pack also included the regular Nuva masks from the previous mask packs, making it just as likely that opening the pack could yield a new protodermic mask or just one of the regular six color Nuva masks that were available the prior year.

As for the current mask market, I dunno; I have personally tried to keep max spending close to $10-$15 per mask unless it is a very rare one such as a “misprint” or that pricey trans-orange Kaukau. But, I think for now it will be very hard to dampen the rising spike in mask costs; they are after all rare Lego pieces from a line that is now twenty years old and are increasingly sought after by collectors. Unfortunately, I believe for whatever reason, the protodermic masks are going to remain rare unless somebody happens to stumble upon a case with 700 of them sitting in a back storeroom somewhere and then floods the market with the new stock. We can as a community try and stop buying the highly-priced masks out there, but since demand is high and supply is low, it would only offer a temporary cost reprieve until the prices spike back up again due to the absurd rarity of those masks. Honestly, I feel there is a story we haven’t heard yet of Lego either accidentally goofing up the release of those masks, or Lego making a deliberate choice to make them rare either due to manufacturing demands (shifting production to the late 2003 Rahkshi/MoL wave and the upcoming 2004 Metru line) or a conscious effort to create artificial scarcity by releasing the protodermic masks purposefully as rare and hard to find items (not too dissimilar from Mr. Gold from the Collectible Minifigures a few years back). If it was a deliberate choice of artificial scarcity though, it is bizarre since as I mentioned prior Lego made no effort to advertise those masks as rare chase items.

Thanks for this. And thanks for the article too! I am a researcher so I respect those who can provide a little more data than before. And yeah, it’s really chalking up to an unfortunate reality for us Bionicle fans.