Why Lhikan's got gold armour ?

Hi again, is it just design coincidence that Lhikan has gold armour, or is there an in-universe explanation, like he was a brief Toa Hagah ?

I don’t know for sure if there was an in-story explanation for that. I’m pretty sure LEGO just wanted to make a figure with gold armor!

I think gold was just a lesser seen Toa of Fire armor color. Jaller Inika had gold armor as well.

I’m pretty sure Gold and Silver are just secondary colors any toa can use, so I guess he just put on some gold armor.

@PakariNation99 was Jaller gold ? I could never tell. I always thought it was yellow.

@SteampunkTahu but the only people who used silver and gold are the Toa Nuva and Toa Hagah. I don’t think anyone else uses those colours.

Helryx had sulver, and all toa of Psionics have gold.

Where has this been mentioned? I have not heard of this.

Anyways, judging from the fact that the mask was yellow in both Jaller sets back in the golden years, and that Lhikan is described as yellow in the books, he might actually be yellow, not gold in story… But I don’t really know. Does it really matter? Not really. Was he a Toa Hagah? No. Lhikan’s Toa career wasn’t actually that long, iirc, it was less than 7 000 years, and most if not all Toa Hagah teams are older than that. Add to it, he spent most of his time as a Toa in Metru Nui, there would have been no time for him to make a large enough name for himself to become a Hagah. I do believe Greg said he had the same mask, not as in a Hau, but the Hau when he was a Matoran, and presumably; though this shouldn’t be taken for granted; he would have had the same colorscheme. (The Inika did not however, which is why this shouldn’t be taken for granted, however the Inika were also transformed via unorthodox methods.)
Note however; the Toa Hagah rebellion took place after Nidhiki being mutated, so I guess he could have been a Toa Hagah?.. Though that’d be near impossible, and extremely doubtful. Plus I’m pretty sure Greg would say no…

The Toa Hagah armor is not really special other than they were gifted new armor, weapons and masks when they became Hagah. These were made from precious metals. It should be noted here that the two things making them special is the rare and/or valuable material used, and the fact that they were gifts. The color is not what’s important. You can have a gold color without actual gold, for example, there’s brass. It’s just a color.

Conclusion: Whether he had gold or yellow armor is up to interpretation. Did it denote anything special like the Hagah or Nuva armor? No.

Now, I didn’t say silver, I said sulver, completely different. And also, I always thought that gold, silver and bronze could be worn by whoever.

It was probably because gold would sell better (remember what happened to brown sets?). Gold says “hey kids! This character’s really important! Important enough to have gold armor! You better buy him!” Now only 29.99!

You know about Orde right, and rhat Psionics is conon, right?

What I read about gold and silver armor on both BS01 and Bionicle Wiki was that it was used to distinguish “elite” Toa, not just Toa Hagah. And even if I am mistaken, it is possible that at some point Lhikan could have been a former Toa Hagah. There is no evidence, but I don’t believe there has been anything said against it.

was Jaller gold ? I could never tell. I always thought it was yellow.

Jaller Inika as a set had a gold chest plate. Jaller as a Matoran set wore a yellow Hau.

In the story, his Hau is Lhikan’s Hau. I don’t actually know if it remained golden when he wore it or not.

But either way, gold/yellow is an alternate Matoran/Toa of Fire color. Gold, as well as silver or bronze, typically didn’t have much of a special meaning in G1 aside from legendary masks.

Once again, the armor worn by elite Toa is more about the value of the material than the color. Toa of Iron, Magnetism, and Psionics all had metallic colors as primary colorschemes.

There is no reason to believe that Lhikan would have been a Toa Hagah.

now now, in addition to Lhikan, we got that sweet Kikanalo figure

@SteampunkTahu no to the former, and “yes I do now” to the latter

Orde is the Canon Toa of Psionics, although he’s male due to the fact that Greg couldn’t remember that Psionics are female.

@PakariNation99 I swear this is breaking my head

I swear this is breaking my head 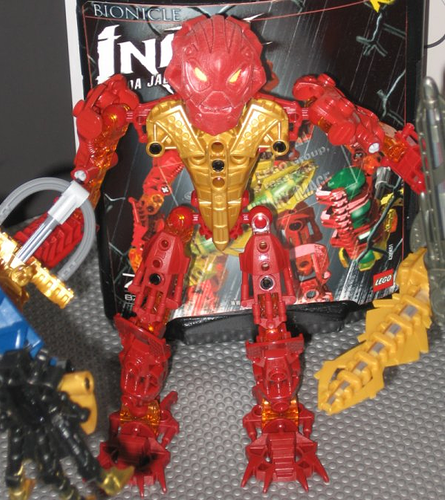 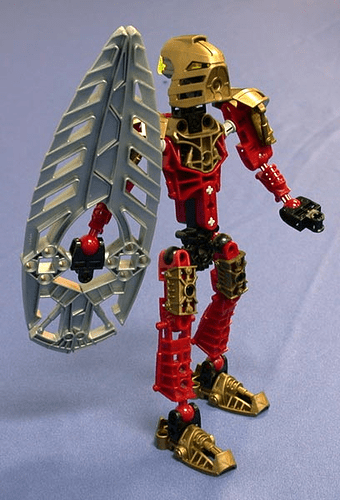 Gold was just a different Toa of Fire color.