Who’s been playing Wordle? It’s been something of a hit on social media lately.

For the uninitiated, it’s a word game, and it’s similar to the board game Mastermind. You have to figure out which five-letter word the game is thinking of, and you’re given no clues at first. You guess a word, and you’re told which letters are in the solution and whether they’re in the right place or not. You have six guesses to get the word. You can play the game once a day and all players are given the same solution every day. Players are encouraged not to share the solution each day so other players aren’t spoiled. You can play the game at https://www.powerlanguage.co.uk/wordle/. Any apps you see on any app stores are knockoffs.

One of the big draws of the game that’s made it so popular is the share function, which creates a little icon of the game board in its final state for you to share.

Here’s mine for today. I got the word in 2/6 guesses. The * indicates hard mode was activated. My first guess had one letter in the incorrect spot, one in the correct spot, and the other 3 letters were not in the solution. My second guess was correct.

Anyways, I think it’s incredibly fun and addictive, and I decided that I would make a topic for people to share their scores here every day. Give it a try!

I’d never heard of this before, but I suppose it was fun. Maybe I’ll do it daily, we’ll see

I got today’s word in 3 attempts

Give it a try! 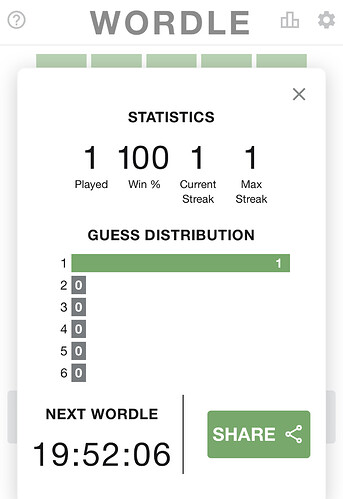 Just kidding. I already did today’s Wordle on my laptop and just did it again in my phone. My actual results are as shown:

With nothing on my first guess, I managed to score two letters on my second, and I slowly figured it out from there.

Here’s mine for today.

I got it in three, with a mix of skill and luck: I started off by using a word with the most common letters, and my third guess was just downright lucky.

I probably would’ve guessed what kdnx guessed if I hadn’t eliminated that letter in the first guess.

It was a hard-fought battle, but I won.

That was the first word I had to really think about, spent several minutes on my fourth guess trying to figure out what fit the remaining letters.

Didn’t help that it had a vowel I thought I’d eliminated for some reason.

I bear gifts from the future:

I’ve been doing some of these recently. They’re really fun

I would’ve thought the days rolled over some time in the West, but instead my Korean powers over time allow me to play a day ahead of everyone else

They are quite fun. I have 2-3 words with pretty different letters, that I usually put in for the first 2.

Here’s mine for today.

Today’s was rough for me. There were like 4 different options with the letters I had, didn’t end up getting it.

I’m sorry but, how exactly do you play this game? all i see are coloured squares.