Hey guys! I’m Aquaris. This is was of my worst enemies back when my island (Athe-Nui) was in War. 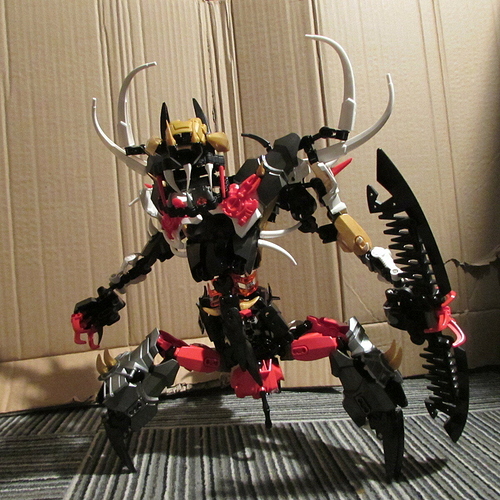 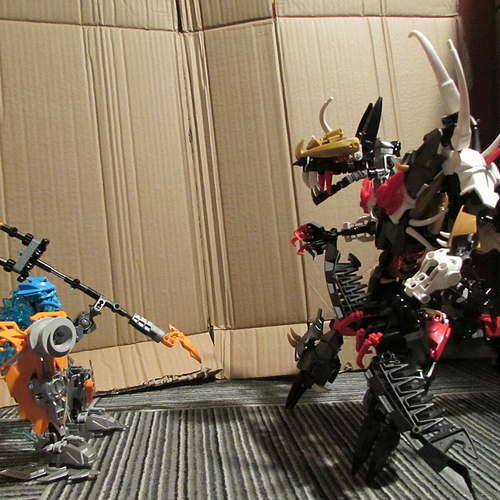 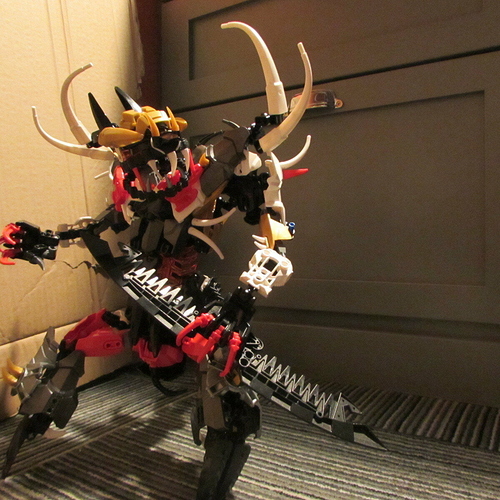 So that’s Zcheneraq. He was a scary dude. His backstory will be coming out soon!

If you guys couldn’t tell, I 'm roleplaying as Aquaris, my self Moc. Please, Please, PLEASE, comment on ways I can improve this guy, and if you wanna see more. So yeah, see yeah!

The heads kinda cool but i think the arms and the torso could use some work, also theres a bit of texture clash between the lower arms and the upper arms with the ccbs armour and the ignika armour on it. Still cool though

Skeleton or not, this moc isn’t very “boney” beside the top portion. It’s thin in few areas (mainly the arms) and the head looks very serpent like.
Overall it’s pretty ok but I wish you took picture on the back.

Although I like the build for the head, the multi-colored teeth really bug me. the white bits at the top are kind of cool, but kind of look odd and out of place. I’ll give you some brownie points for trying to make a custom torso. However, the messy and slapped together look of it just detracts from the model. I would try to take off some of the armor plates and add-ons then go from there. Although they’re probably the only part of the MOC that really keeps to the “Master of Bone” name, the arms really break up the style of Zcheneraq. Here you have this primarily black, gold, and red character with these really long, extremely spindly arms. It would be for the best if you scrap them altogether and go for something bulkier. A slight name change might also help. As for the legs? They’re honestly not that bad. I would just recommend changing out the silver for gunmetal, get rid of the golden spikes, and make the back leg identical to the two in the front.

In short, I would scrap most of the white on the MOC and go for a name change. Some additional changes like the aforementioned arms and legs would also help the model out.

Cool, thanks for the help

Yeah, I would’ve uploaded it, but I can only upload 3 images at max because I’m a new member

Yea… I don’t know how well talking from the first person will work for you. Also, that name.

Cool. I appreciate the critism and I’l try to take that into account when I adjust it. This is just a preliminary model to get some ideas from the community. Thanks for the help. Sorry though, the name isn’t gonna be changed, it’s a thing I decided I wouldn’t change a while back for various reasons.
Thanks again!

@Xing1870 xD. Sorry, the names gonna stay, and the First-person thing was just an experiment.

Yeah that name is.

Also he looks nothing like a Master of Bone.

Case in point, [Chro]'s Kazga, Master of Bone, from two years ago: 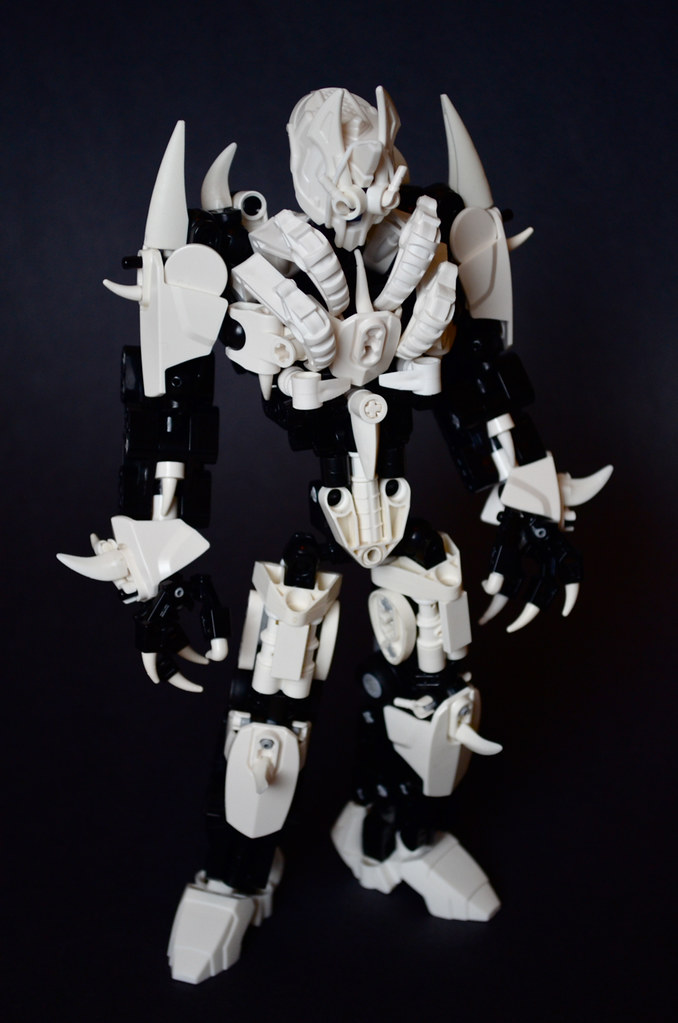 I like the ideas you have going here, but the colors end up looking really cluttered, and the character really doesn’t match the name and title. I’d say your best start to improve this would be to fix up the color layering and blocking, then start cleaning up the cluttered areas like the torso, and then move to filling in the gaps such as on the legs and arms.

Ah yes, I see you fought in the NowPast wars.

Huh. Maybe my first comment would go to why bones? The colors are a mess, I feel like I’m looking at a skittles bag that had ink spilt into it on accident. There are too many gaps and places that don’t make sense as in structure. I’d say stay away from CCBS but I know not everyone has a ton of G1 bionicle lying around somewhere. Again with those random colors, I can get the white maybe being bones but everything else doesn’t make sense color wise. Other than that Its a coo mocl, but needs lots of improvements.

I may encourage you to take a look at my Zcheneraq Revamp because this is just a preliminary model.